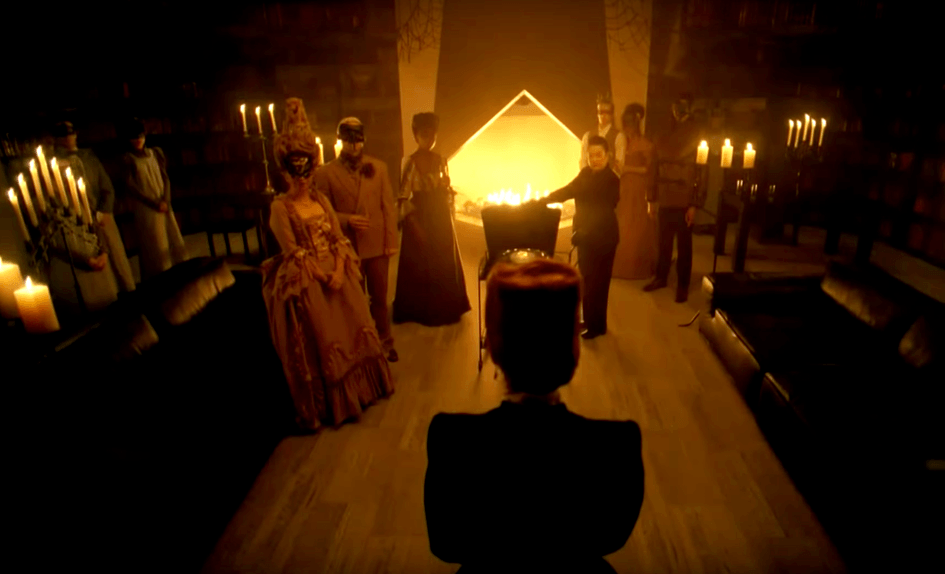 Recapping of last episode: The Son of Satan out here making people look like fools, humiliating others, GDGE has gone to the Dynasty in the sky, and Smart Sis Emily and Timothy out here risk life to get some good-good. Oh! And Miriam is really a robot, and the world is still gone to crap…so…yeah…there’s that…

We open on Michael meeting with the other members of the outpost, slightly revealing that he has the “power see into people’s souls.” This includes him also getting Smart Sis Emily and Timothy off the hook for sexing and making it look like Grand Dame Grandmama Evie (got to say it one last time) died in her sleep, allowing Mr. Gallant to get away with murder. One of the biggest reveals here is that Dinah-Oprah knows Michael, and she gives us a super reveal. She has the power to know things, which makes since that she is like Oprah. So, we got a Black witch! This had me super excited!

Oh, but baby, when Michael confronts Mallory as she is trying to leave, she literally knocks him back…using her powers. MALLORY IS A WITCH TOO!!!! FINALLY, I’M GETTING WHAT I CAME HERE FOR! Michael’s face transforms into something old, ugly and demonic, and he lunges at her, but she once again stops him by causing the fire behind him to blow everywhere before running from the room.

When we come back, a naked Michael is preforming a blood ritual to his father, and BASTDAMN more snakes appear out of the pentagram made of blood. During this ritual, he says that he has killed all the witches (or so you thought, sir) but one survives. (So, here I assume that Michael is just not afraid of Dinah-Oprah’s power, because I know that both of she and Mallory are witches from the previous conversations and actions.) Meanwhile, Miriam is telling her “life story” to Wilhemina and that she was programmed to feel, to have memories, to basically be a person; however, none of it is real. 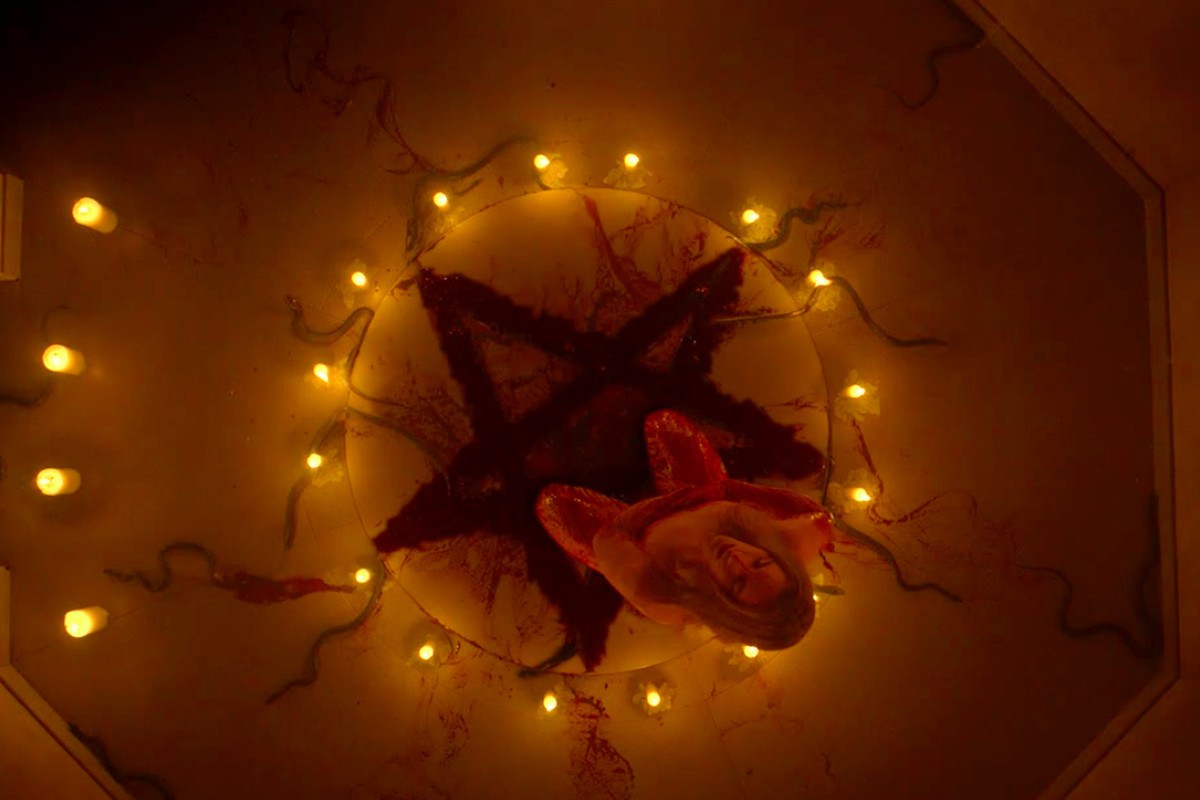 Wilhemina trusts Miriam above anyone else, and they hatch a plan to kill everyone, including Michael (yeah, that’s going to end well) and get themselves to the Sanctuary, because Michael already told Wilhemina she sure ain’t getting saved.

Somewhere lost in the fog, we find out that Coco’s boyfriend Brock is alive (thought visibly not too well) and has turned all Mad Max Beyond Thunderdome on his quest to find Coco and the outpost. After he shotguns three guys that were about to kill and eat him, including a former special education teacher, it just so happens that a black carriage (like the one that brought Michael to outpost) goes by. He gets under it and hitches a ride to the outpost.

When the carriage arrives, its only contents is a box that contains “fresh” apples. Miriam and Wilhemina decide to poison the apples to get rid of everyone. So, they decide to throw a party. While Ursula the Enforcer is outside about to kill the horses, she is stabbed by Brock, who takes her access card and enters the shelter.

But I’m a Witch 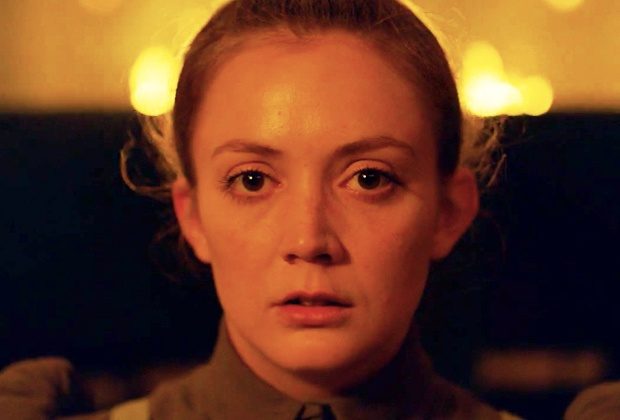 Now back to the best storyline, Mallory is deep in thought about her confrontation with Michael. Coco breaks her from her trance to come to the meeting room, where Wilhemina tells everyone about the Victorian Masquerade Halloween (Death) party. From there, we move to Coco’s room where Mr. Gallant is creating a theme appropriate hairstyle for her (where he got the extra hair from is anybody’s guess), and Mallory is being forced to make her costume for the party.

Coco surmises that the party is so important, because they will be announcing who is going to the Sanctuary. Mallory decides to tell them that she thinks she has powers. Coco challenges her to show her powers, which she is unable to do. Coco down talks her like she is trash and sends her on her way. I really feel bad for her and want Coco good and dead. (Didn’t know I was going to get my wish so soon.)

At the Halloween gathering, there is music, dancing, smiling faces, and bobbing for (poisonous) apples…and a mysterious man dressed in all black wearing a mask. Believing it is Michael, Coco cozies up to him to try and make sure her spot is secure in the Sanctuary. After acting like the insufferable socialite she is, she takes him upstairs with the promise of “anilingus” (her word, not mine) aka tossing salad; however, just as she is about to pull his pants off, the mystery man reveals himself to be her thought dead boyfriend Brock. His response to her fake feelings of missing him is a knife through her forehead. Good riddance to bad rubbish! (I heard that as a child and now I have no clue from who or what.)

Back at the party, Wilhemina and Miriam are watching everyone bob for the apples that they have injected with snake venom, including the guards that work for them. They make everyone wait to eat their apples in a faux toast of sorts. Once everyone takes big bites, they immediately begin to feel the effects of the poison. It causes them to vomit uncontrollably including blood, foam at the mouths, twitch, and ultimately die. Wilhemina and Miriam smile as they watch from balcony above.

Wilhemina and Miriam walk among the dead bodies and vomit, rejoicing that their plan worked perfectly, before going to kill Michael. When they enter his room tell him they are there to kill him, he laughs in their faces, but he tells Wilhemina that he is impressed that she went through with killing everyone and would like to bring her to the Sanctuary. For a moment, you can see the happiness and joy all over her face, but she decides to go through with the plan of kill him. She calls on Miriam to pull her gun out and shoot Michael. Instead, Miriam shoots her in the chest and kills her, but she doesn’t know why. Michael reveals some more Devilish traits and tells Miriam that she was made by him for him. He based her on someone from his childhood who actually loved and cared for him.

Calling All My Witches

Down the body ballroom, the music on the radio suddenly changes, and we move outside to the outpost gates. They open on their own, and three figures walk through the fog. Yep, you guessed it…

Supreme Cordelia Foxx, Madison Montgomery, and Myrtle Snow have come to save the day. Cordelia sends Madison and Myrtle to find their “sisters” in the house. So, of course I knew that Mallory and Dinah-Oprah were going to be brought, but I didn’t know who else. I wanted it to be Emily so bad, or Timothy because I still want a male witch. But no, nope, it’s neither of them. Instead, it’s FUCKING COCO!!!! FUCKING COCO!!! ARE YOU SERIOUS!?!?!? COCO IS A FUCKING WITCH OVER EMILY OR TIMOTHY!!!!

I’ll get back to my distaste for this choice, but let’s finish out the episode.

Back to Life, Back to this Mess up Reality 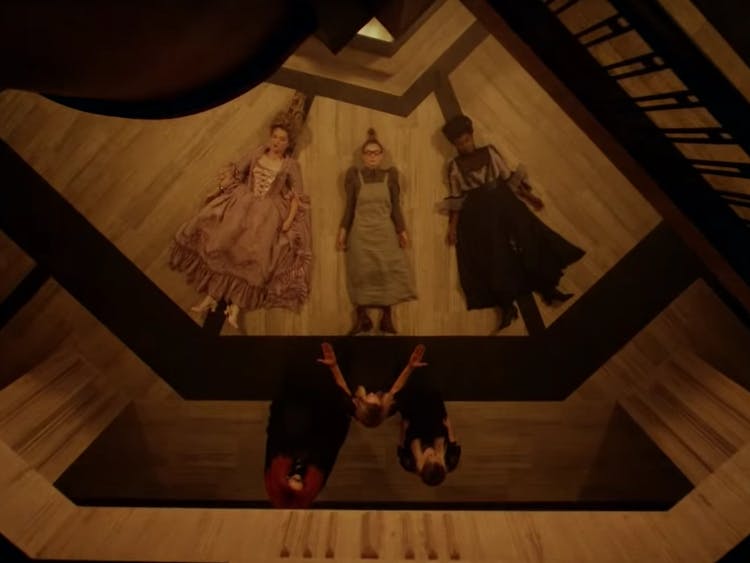 Cordelia performs one of the hardest of the Seven Wonders on Mallory, Dinah-Oprah, and Coco (*strong side eye*) Vitalum Vitalis, which is balancing your life force with that of someone dead to bring them back to life. Now, I was a bit on the fence at first, because it could also be the power of Resurgence, which also allows you to bring someone back from the dead. However, for those of you who have watched Coven, you know that part of the ritual/spell to preform Vitalum Vitalis is to physically blow into the mouth of the dead person, which Cordelia does.

In easy form for her Supremeness, the three pop up, shocked to be alive. Madison moves in and kneels in front of Mallory to give us her signature line…

“Surprise, Bitch! I bet you thought you’d seen the last of me.”

Now that’s how you end an episode.

So, I’m going to glaze over a couple of things to get to exactly what I want to talk about.

Wilhemina’s wardrobe is amazing this episode. She wins best dressed hands down. 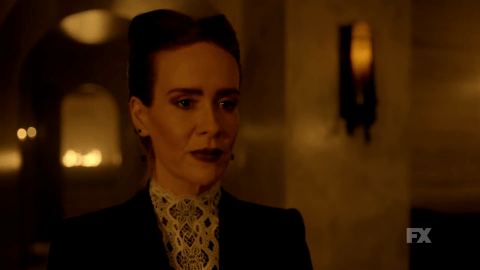 Katy Bates character wasn’t in Murder House, so I’m guessing Michael had Miriam fashioned after Jessica Lange’s Constance Langdon, who was his “mother.” Either way, I am interested in their connection.

Also, with this episode having references to Adam and Eve, and Emily and Timothy being basically them, I’m stumped as to why they are dead. Their special DNA was the reason they were saved, and for me, it made since that at least one of them would be a witch. I guess not though. So, now I’m left wondering is it going to be one of those storylines that was introduced by one writer and then just goes no where because the next episode’s writer doesn’t do anything with it. That’s always been one of the things I didn’t like about Ryan Murphy and Brad Falchuk having different writers for every episode.

That aside, let me get this out of the way….

MY WITCHES ARE HERE!!! THE COVEN HAS FINALLY COME BACK TO AHS!!!!

When I heard the music change and the camera move outside, I knew it was time! I got so hype when I saw the three cloaked figures coming out of the fog. They came in regulating and resurrecting from jump. Speaking of resurrection, Cordelia had to also bring Madison and Myrtle back from the dead as well. Madison was strangled the death by Kyle, and Myrtle was burned at the stake. We already know that this means several other witches are coming back. I won’t spoil that for you. Though if you’ve seen any of the promotional material for the season, you already know more witches from Coven are coming. But for now, I’m just happy to have the witches finally making their appearance, and I can’t wait to see their magic against that of the Antichrist.