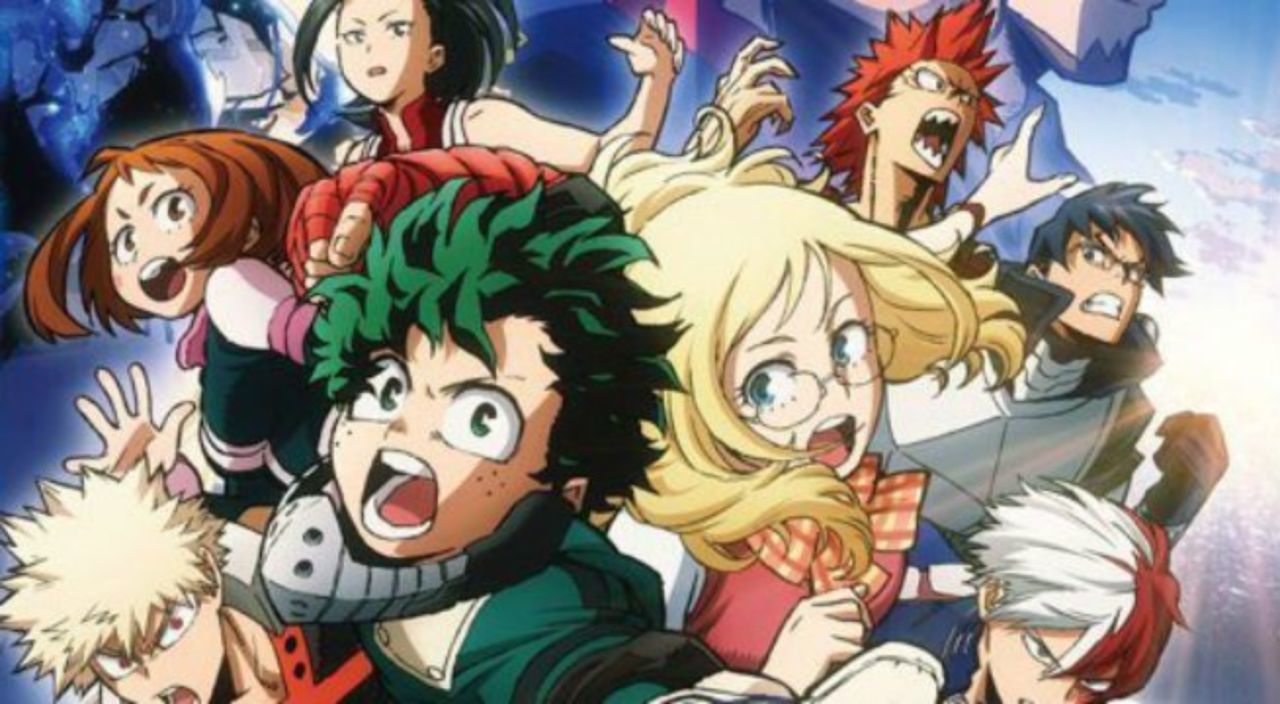 Relentlessly optimistic and incredibly wholesome, My Hero Academia: Two Heroes (also known as Boku no Hīrō Academia THE MOVIE: Futari no Hīrō) is both the feel-good movie of the fall that other films should aspire to be and the silver screen debut of what I’d call probably one of the most popular anime series of 2018. As Season 3 nears the end of its 25 episode run, My Hero Academia: Two Heroes is a more than welcome addition to the wonderfully bright world of the series. Produced by Bones, directed by Kenji Nagasaki and written by Yōsuke Kuroda, Funimation’s My Hero Academia: Two Heroes is the most fun I’ve had at a superhero movie in 2018. The story continues the love letter to the genre created by Kōhei Horikoshi. 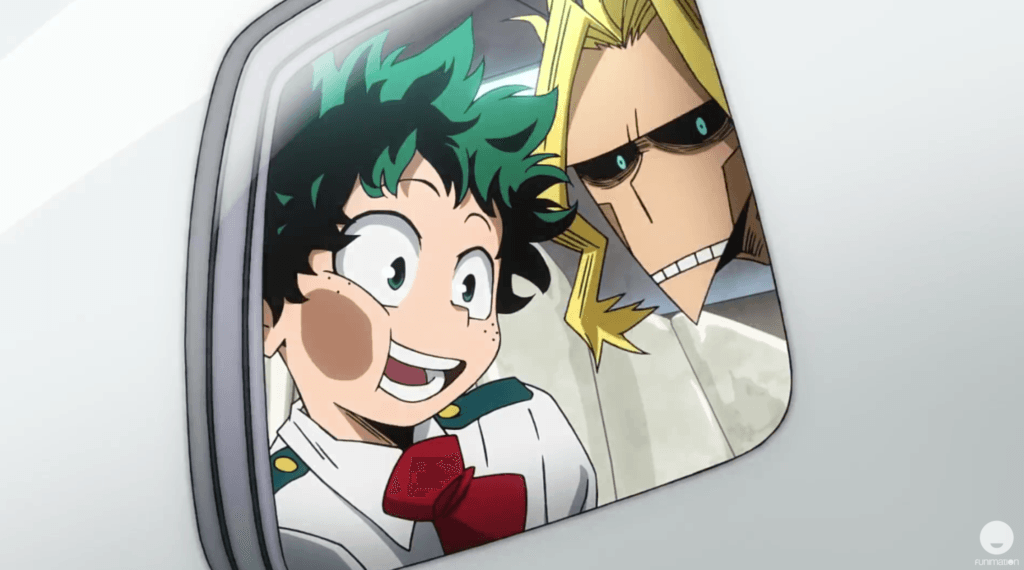 Much like the prologue to the movie itself, I will now spend some time recapping the first two seasons. My Hero Academia tells the story of young Izuka Midoriya on his journey to become the #1 hero. In a world where over 80% of the human population have Quirks – strange, unique powers that are as boring as generating water or oddly particular as manipulating clothing fibers, Midoriya was Quirkless as a child. Despite lacking any notable abilities, he inherited the powerful quirk One for All after a chance encounter with the Symbol of Peace / Japan’s Greatest Hero, All Might. Midoriya ‘s new Quirk basically gave him super-everything (although he can’t manage to use his powerful at full capacity just yet). My Hero Academia follows Midoriya as he takes up the hero name “Deku” while taking hero classes at U.A. High School. Among an equally colorful cast of characters, they happen to be magnets for all sorts of trouble . Behind the scenes, All Might as he struggles with a diminishing use of his once-great power. 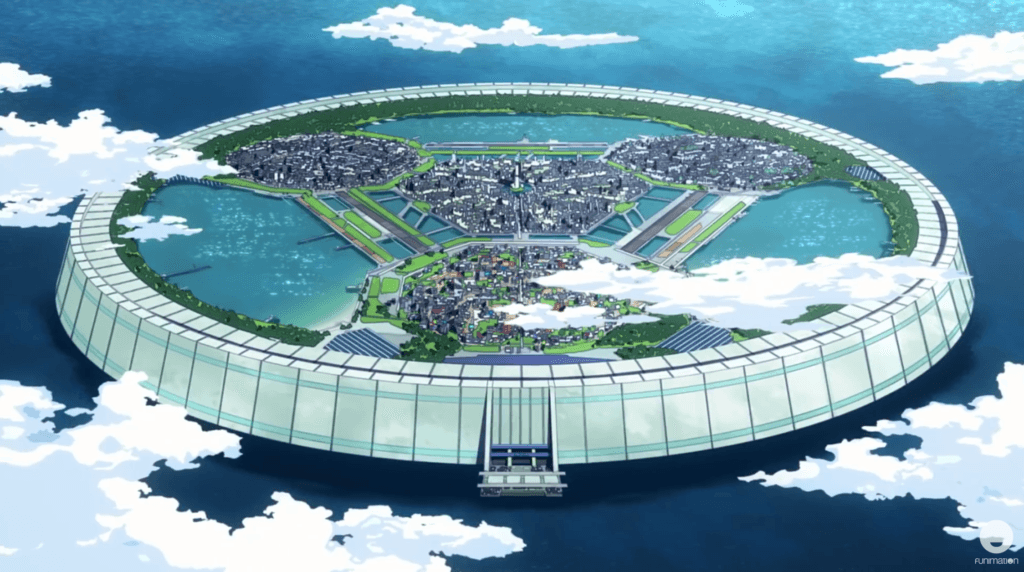 As explained in the “Special Episode: Save the World with Love!”, My Hero Academia: Two Heroes takes place during an explicit point in the canon: during the summer vacation before the summer training camp that compromised the first arc of Season 3. All Might was invited to I-Island, by his former sidekick’s daughter. The location is a facility with some 10,000 Quirk researchers, working together to try and create new devices to aid in superheroics. All Might graciously accepts the invitation and brings along his protégé, Young Midoriya.

Two Heroes is essentially a 3-episode filler arc. Regardless, it is beautifully animated, brilliantly scored, and gives us a bit more insight to the how the rest of the world is fairing with Quirks. We get a chance to see All Might in America as an exchange student, wit his cheerful, toothy smile.

He’s working alongside Dave Shield: master scientist, inventor, and All Might’s personal costume designer. Exposition about Dave is delivered via All Might’s bombastic narration, while referring to his finisher as “the move named after your home state… CALIFORNIA… SMASH”. If that’s not exactly what you were expected, I don’t really know what you’re here for. I’m here for joy. I’m finding joy. 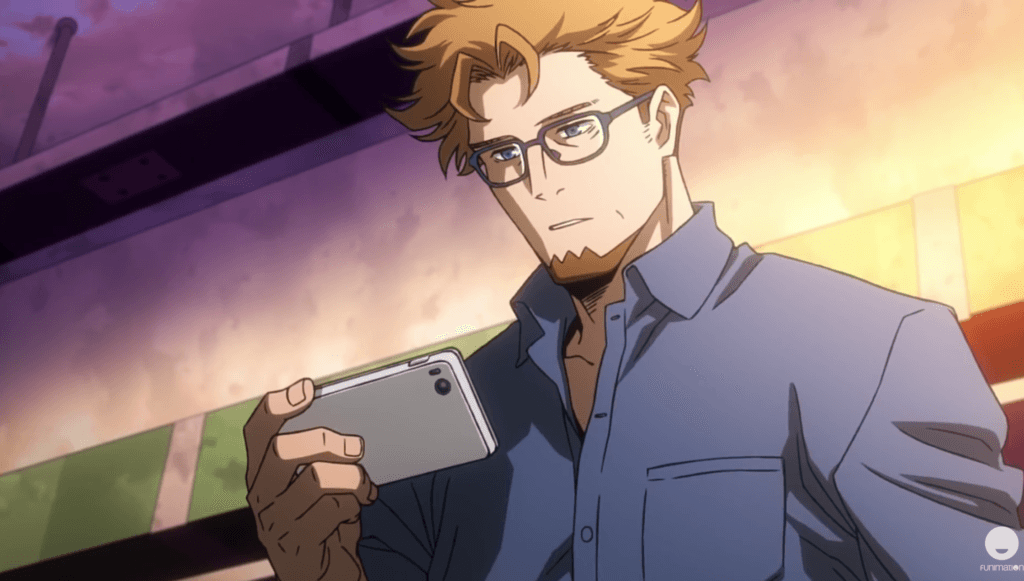 The other central, movie-specific character is Melissa Shield, Dave’s daughter. She really takes after her father with the inventing beat. Melissa is also Quirkless — not unlike Deku — but is a third year I-Island Academy student. Melissa serves as the main guide to the new locale for any new-comers to meet the cast of the characters. 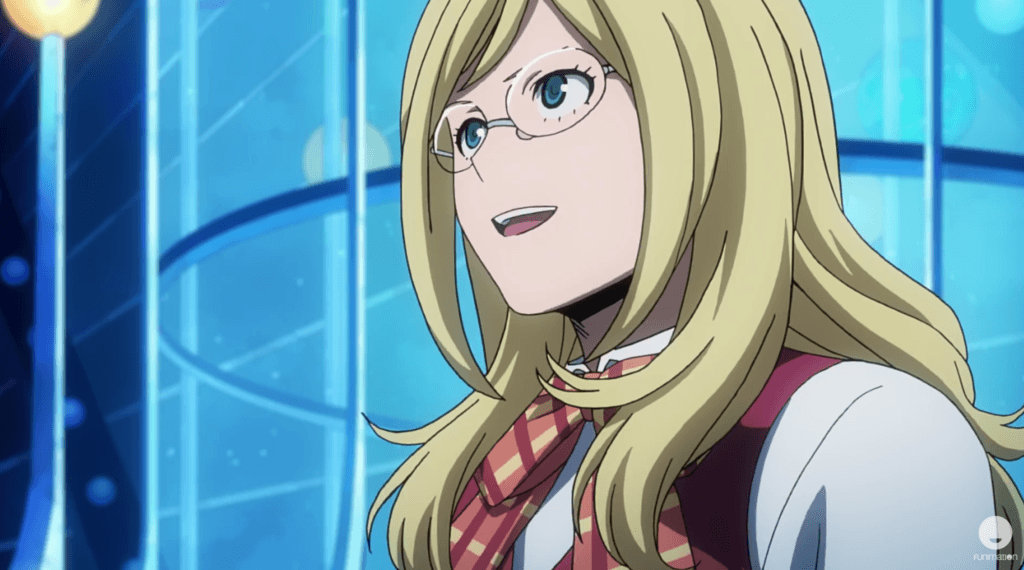 The plot is as straightforward as it gets: what was supposed to be a low-key trip to a fun island quickly escalates when villains take over. It’s up to our budding heroes to step up and save the day when all the pros get incapacitated. Honestly, I could not tell you the names of any of the villains without looking them up. Truthfully, it doesn’t really matter. I came for the antics of Class 1A trying their hardest to save everyone; and that’s what I got.

My Hero Academia: Two Heroes knows exactly what it is: a chance to do everything the anime does, except bigger and better. I-Island is a wonderfully inventive set-piece, featuring amusement parks and an incredibly convoluted research tower where most of the film takes place. The familiar orchestral beats and guitar chords come into play at just the right moments to instantly deliver a smile and get the heart pumping. The animation is absolutely gorgeous even as the fight sequences remain uncontested in their inventiveness and flashiness.

The theater I went to featured the dub. As far as I can tell all of the original voice actors were there, having a great time with this particular jaunt. Learning more about All Might’s origins was a welcome addition to the film, and showed how he was always such a galvanizing figure. While I always love the stock footage of him saving citizens from a raging fire, it was nice seeing flying through the air with swagger and style. Midoriya’s fanboy tendencies and innate desire to help people continues to be sickeningly endearing, and the rest of his classmates who got caught up in the incident were each given moments to shine. Those who didn’t get to participate were at least acknowledged. 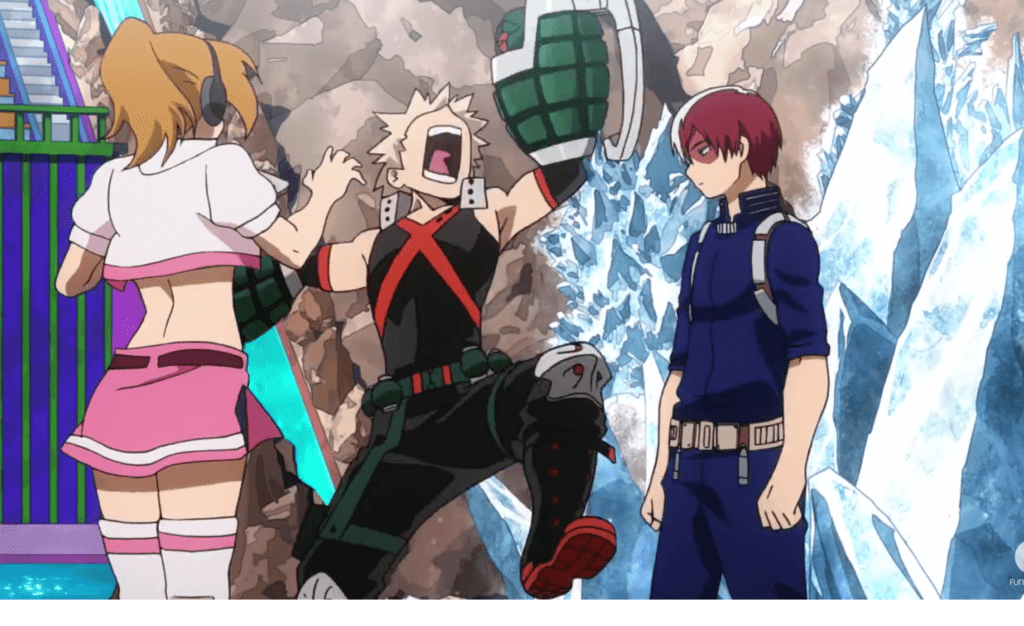 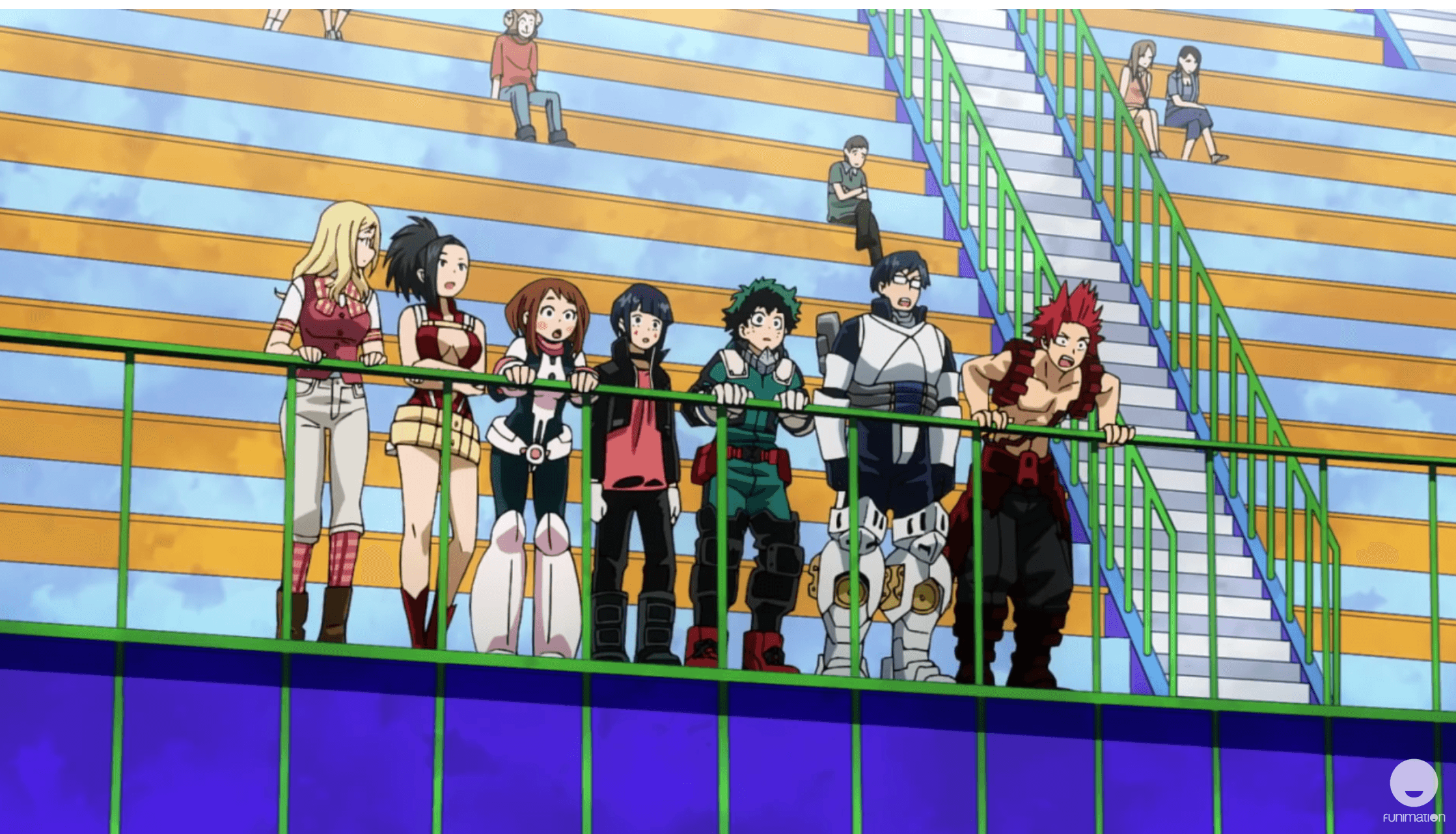 The movie does not stray from the themes of the source material. There is a heavy emphasis placed on the idea of legacy, and being willing to evolve and learn from past mistakes. There are talks about how heroes can’t help but react when they see others in trouble. There are moments when the cards are stacked against our heroes. Rather than fold, they persevere. Lines of dialog will sound very familiar to those who have seen the anime. That’s a bad thing, because there’s just enough revision to make it work.

My Hero Academia: Two Heroes brought me joy during what was a particularly difficult September for a wide variety of reasons. The optimism that the series and the movie embody is simply uplifting. It is worth watching on the big screen if you can find it. Otherwise, it’s a must-own when it becomes available for home release. As is entirely expected, everyone involved went PLUS-ULTRA! 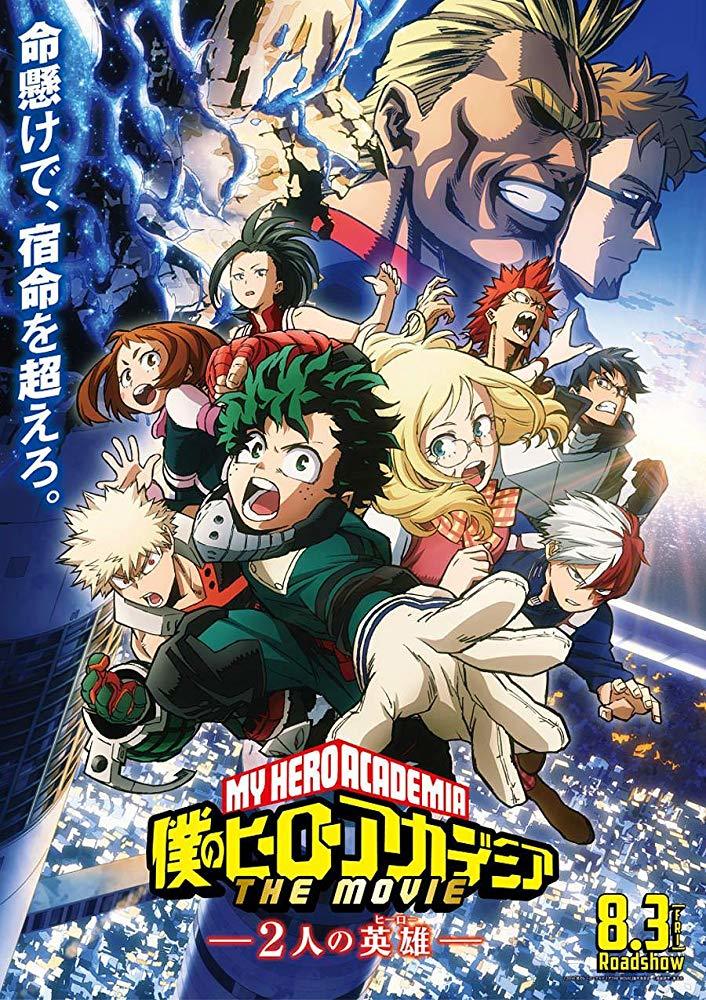