**If it’s under His eye, it’s here… spoilers all through this joint, fam**

Hulu came out the gate with the first two episodes of The Handmaid’s Tale knowing two things.

This episodes picks up after the public stoning that didn’t happen, because Offred (June) was badass and told Aunt Lydia to kiss her grits. She and every other handmaid chose not to stone their friend and looked Lydia dead in the eye dropping them stones. Next thing we know, June was being tossed in the back of an armored vehicle. She and the other handmaid’s are seen gagged and herded into Fenway effing Park. This ain’t no baseball game. Nope. This is a mass lynching. I cannot explain to you how my skin crawled when it hit me wtf was going down. Dozens of nooses, fam. I cannot think of anything more blood curdling than that. A platform with a noose for every single woman and a bottom that drops on command. Sick. To. My. MEffing stomach. These women are shivering with fear. The handmaid’s are muzzled and damn near hogtied, forced onto this platform with a noose hanging in front of them and then… 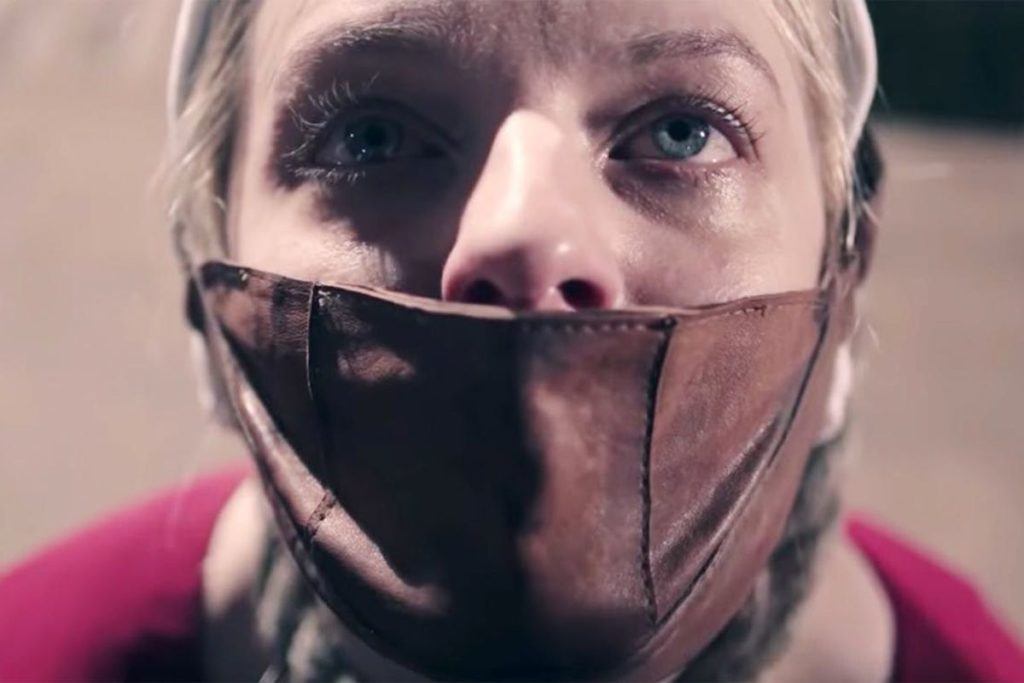 A Woman’s Work starts playing as the guards are placing these women’s neck in nooses, and I’m thoroughly confused. I didn’t think it to be the best song choice for this, albeit I am pleased that they did not go the Strange Fruit route. My confusion was because a woman began to sing the song and all that I’ve ever know was Maxwell’s version and y’all… I was about to be so upset. I thought that my mans just got Paper Boi’d. Alas, the original A Woman’s Work was written and performed by British singer Kate Bush. While I can’t say I would have chosen that song or that version, I get it. The song is by a woman. Women are being tortured. Let’s not belittle the contribution of women during this scene with a cover by a man. Very feminist approach. Check.

Just as you begin to believe that these women are truly about to be taken out of here, the guard yells “By His hand.” The floor is released beneath their feet, except it isn’t. Aunt Lydia’s self righteous ass set them up. I can’t even call this a set up. What words do I have for this extreme act of torture? Is it terrorism? It surely evoked terror and fear into these women for the sake of making a freaking point.

Flashback: We do get a bit of time to breathe while we step back in time with June/Offred pre-New World Order. June is with her husband and their daughter. Doing somewhat “normal’ shit like getting his signature for her birth control. Talking shit, making future plans. Kisses and future baby plans. Embarrassed kid noises. School drop off. Work. “Normal.”

This episode flipping in and out of present time, as The Handmaid’s Tale is known to do, offers us (viewers) an eery juxtaposition of emotions surrounding motherhood. Offred is outed by Aunt Lydia for being “with child” during one of Lydia’s cryptic lessons. The women are on their knees in the ritualistic-looking concentric circles that seem to mimic the “all seeing eye” while holding a stone in one hand with their arm at a brutal 90 degree angle in the rain. Offred is taken away and celebrated by a ringing of a bell. 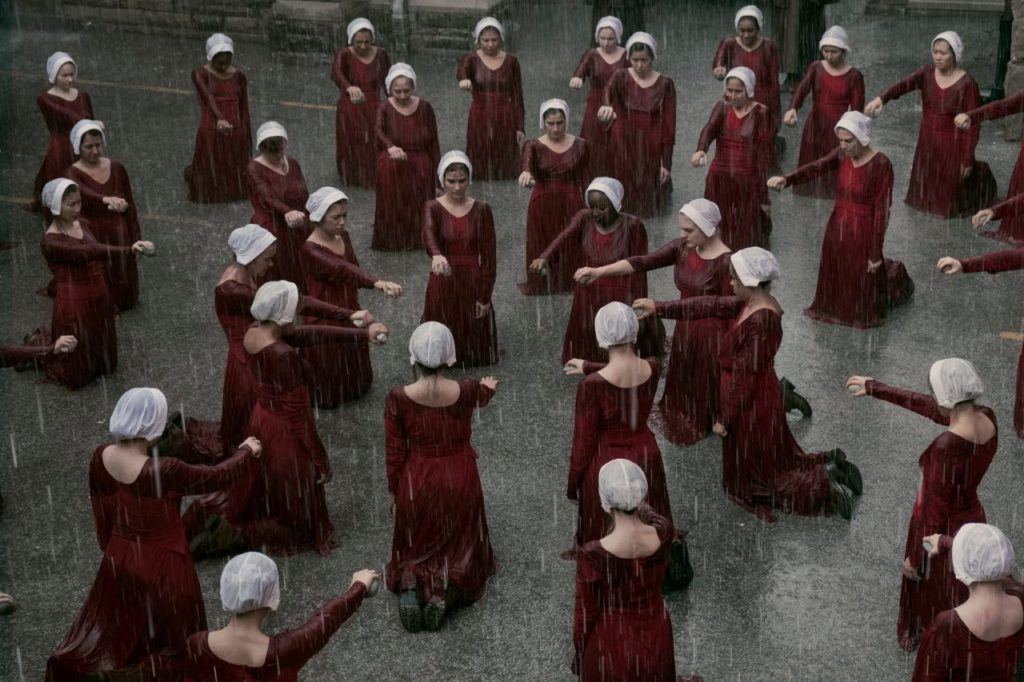 Offred does her best to deny Aunt Lydia even a sliver of joy. She refuses to eat, but later she’s shown an example of what refusing to carry the offspring of the commander could possibly look like. She’s shown a pregnant handmaid named Ofwyatt barefoot and chained in a dim basement, given enough slack to walk the perimeter of the floor rug beneath her bed. So, Offred gives in and finally concedes to eating the damn soup. Lydia ain’t through yet. The other handmaid’s are brought in from the rain, placed in single file lines in front of Offred and taken one by one to have an arm, their throwing arm, chained to a gas stove and burned. All while Offred is expected to eat. Who is the offering and who is the sacrifice?

The second half of the episode brings us to a June flashback. A call from the school leads her to the hospital to pick up her daughter and be berated by a “social worker” who refuses to call her by her surname (not her husband’s last name). We’re allowed to see how she was berated by child services for giving her daughter an aspirin instead of keeping her home, berated for being a working mother; her competence questioned. I think it’s safe to assume that this is a foreshadowing of how June loses her daughter, Hannah, to these vultures. 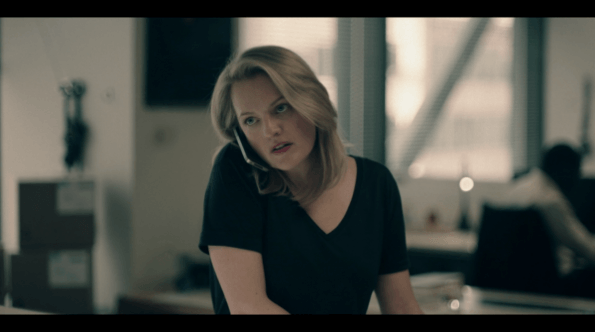 Now present time June/Offred is in an examining room for her first ultrasound with her horrible mistress/Martha and the Commander. At the end of the exam, a medical tech walks past and gives Offred the “Blessed be the fruit” with the Black folks-fam head nod and called her June. Whuhhh? I’m as confused as Offred. When we start offering head nods to just anybody? Everybody on the same playing field here, huh? Offred knows something is up and starts looking around, scanning the joint as she gets dressed, all to find a key in her standard issued brown boots. Next thing you know…. Offred done cracked the duct tape code and is chasing red taped rectangles down a staircase, to a flashlight, through a tunnel and into the back of a meat truck.

Do you know how desperate for freedom you gotta be to just follow a trail to seemingly no where and be relieved to find yourself among refrigerated hanging pigs? Many of us may not know personally, but we got ancestors who shipped themselves in boxes, so….whoever said freedom and comfort was synonymous? 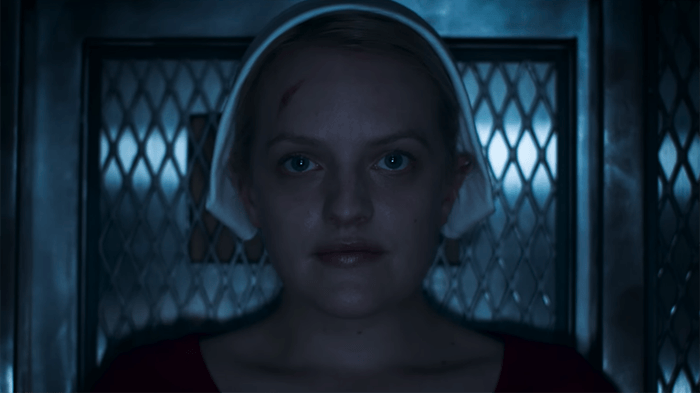 The first episode did not come to play, so I’m gonna let ya’ll take a breath and we’ll get into that second episode soon.