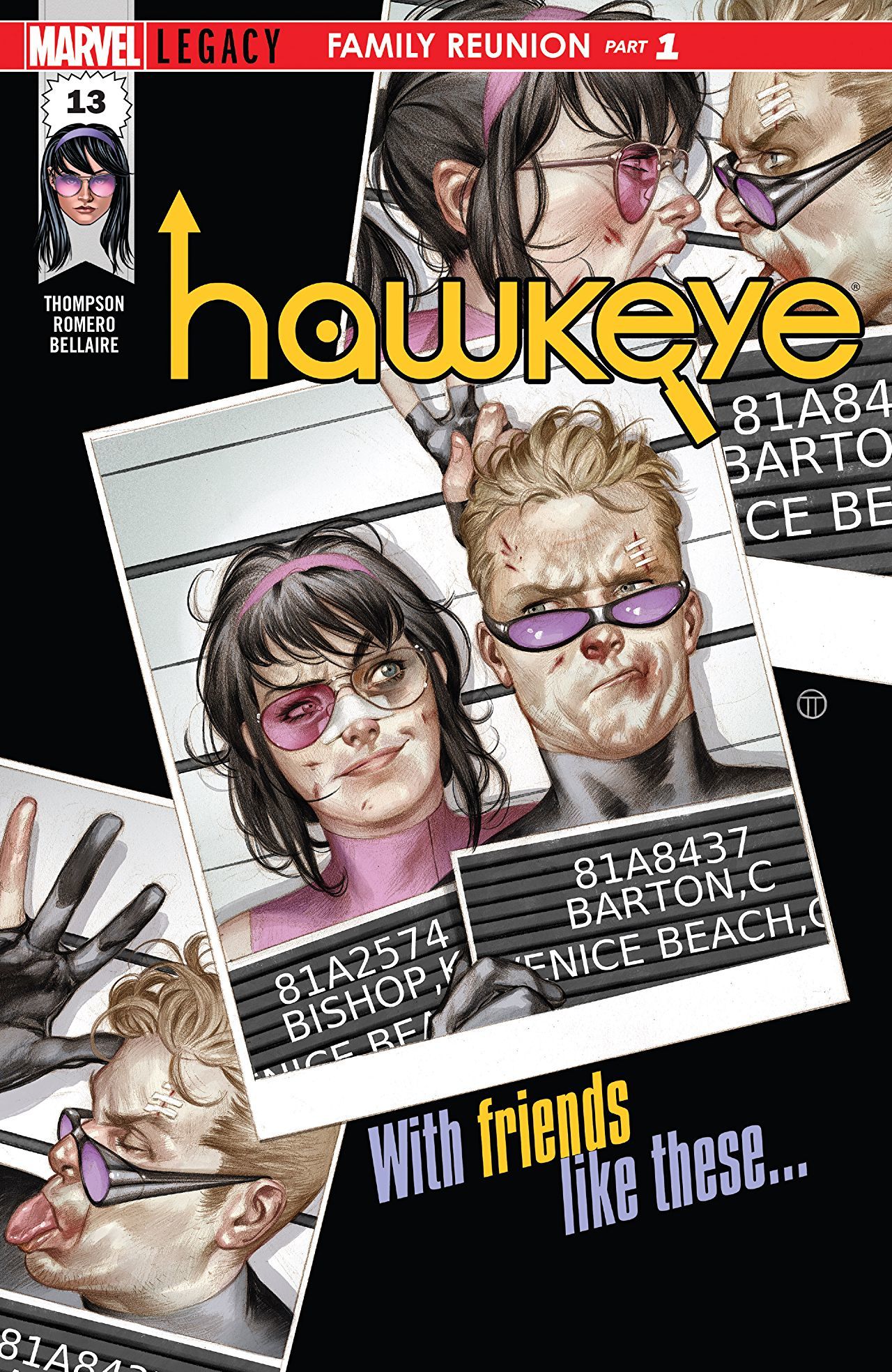 Kelly Thompson ain’t slick, man. We’ve gotten a good amount of team-ups in Hawkeye. They’ve come at just the right time and never felt half-assed. All those team-ups were leading up to Clint Barton finally coming in for the tag. Kelly got team Bows N ‘Rows back together again. I mean, isn’t this what we’ve all been waiting for?

In the through the path she set for Kate Bishop, Thompson proved she’s the true successor to Fraction’s niche writing of Kate and Clint. Seeing her take on Clint Barton’s character feels as natural as the Nature Boy Ric Flair (cause he’s a Nature Boy? Get it? Whatever). Barton arrives needing Bishop’s immediate help. However, Bishop needs his help in finding her mother. Barton says his issue is more urgent, which seems selfish, yeah. Until…

They got someone trying to 86’em and this guy didn’t put it in layman’s terms cause, “I didn’t wanna to be dramatic!”. It’s like Kate and Clint never got separate series, ain’t it? Thompson is masterful with her dialogue and nails every character under her wing/pen. I won’t reveal who is trying to kill them but it’s a full circle to a specific one-shot that they debuted in. Thompson ain’t wasting any loose ends, she even makes reference to Civil War II (“That thing in Nevada.” Nice). 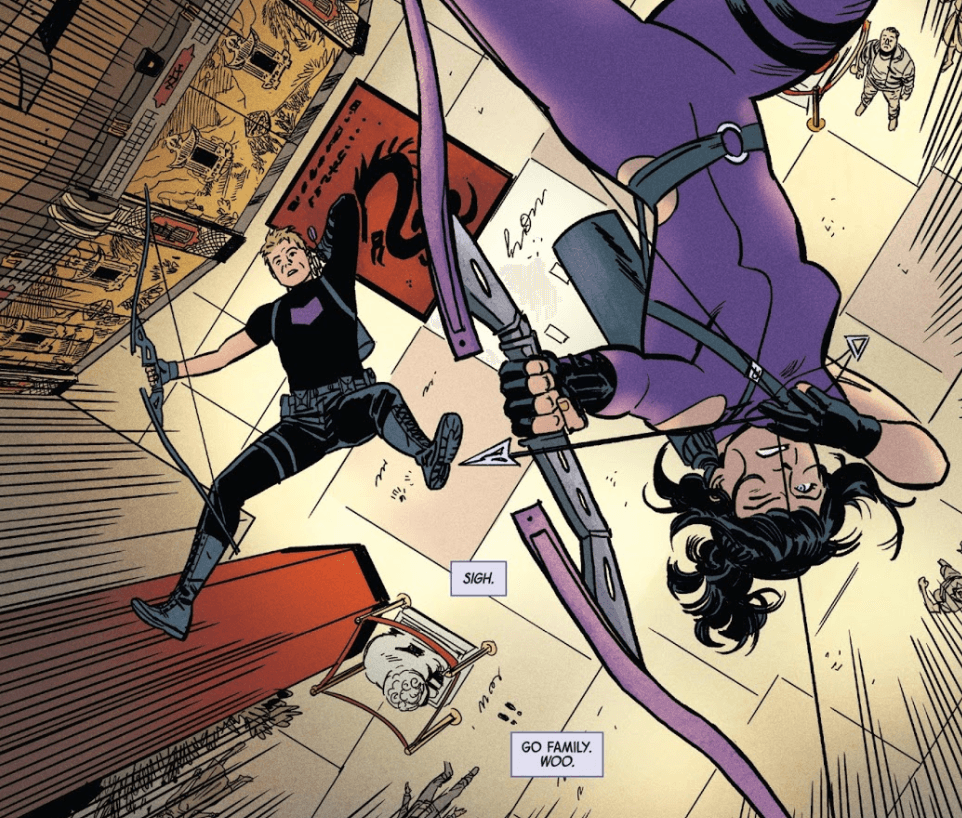 Now obviously, since Kelly ran with the baton from Fraction, then the successor to David Aja occurs and Romero’s shifts in the artwork. Romero is on for this issue and it’s always a joy man. Always a pleasure. Romero’s characters look smooth, their actions are fluid. That new arrow from Clint? That was a smoothly executed scene transition.

Plus the fighting? Ughhhhhh! Romero stays drawing unique action scenes. Especially when they match the tone of the caption boxes? The actions of these heroes trying to apprehend their opponent without hurting them while their opponent doesn’t share that boundary, all executed gracefully in the visuals. Romero does this series justice with the art. Also, shout out to Jordie Bellaire with those inks.

Aye, Jordie, what was your tag name when you were doing graffiti? What was the alias when you were bombing walls? I say that cause these shits be looking so clean man. Plus, that coloring of the darker-skinned characters Ramone and her brother Johnny? *Continuous head nods with a “you a real one” tear falling onto cheek* It’s always a joy to see what hair color Ramone will have when she appears too. 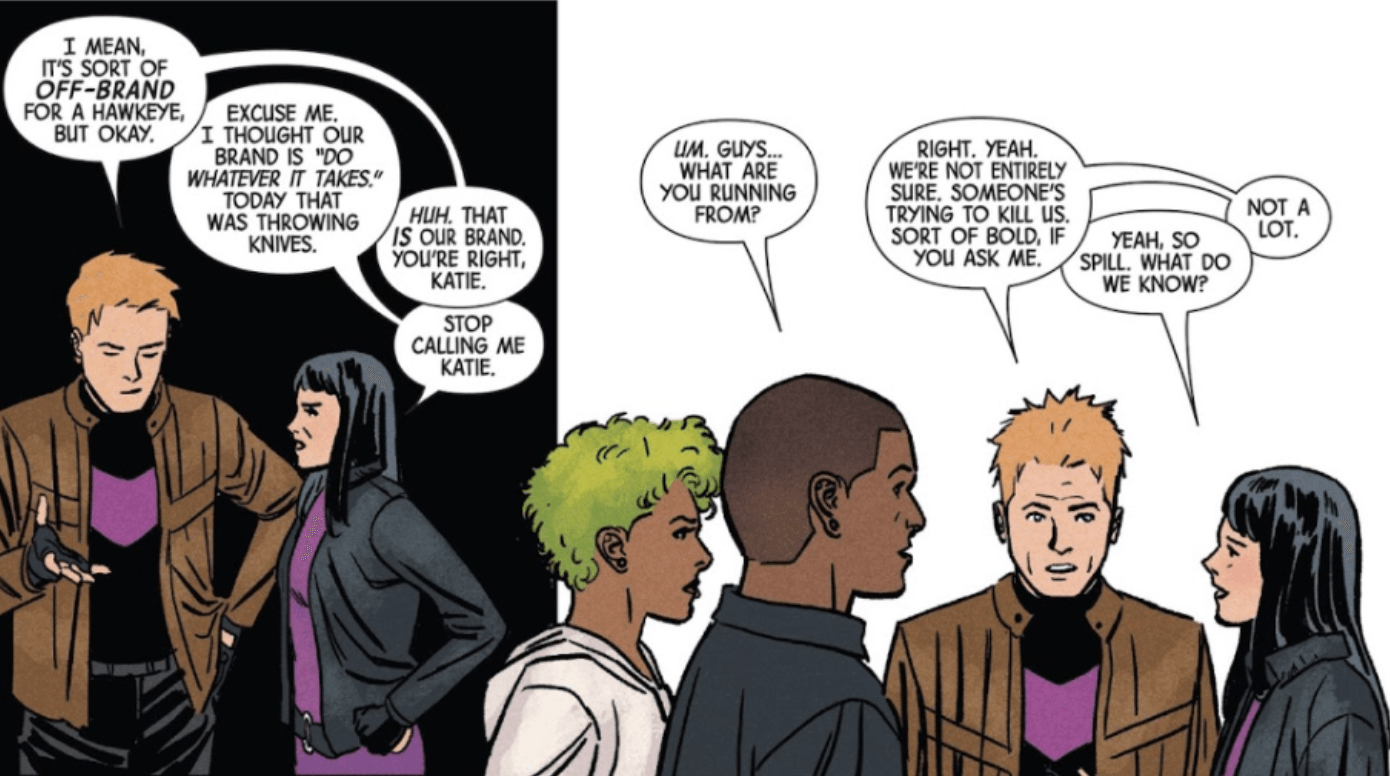 I never know what to say here in conclusion. The series is dope man. This creative team constantly puts in the work to ensure Hawkeye stays at the top of your pull list. I’m waiting for a weak issue, so I can show I’m not being biased. Thompson, Walsh, Romero, and Bellaire ain’t having it tho. Create game too strong.

8.3 Throwing knives added to the inventory out of 10

Reading Hawkeye? Find BNP’s other reviews of the series here.