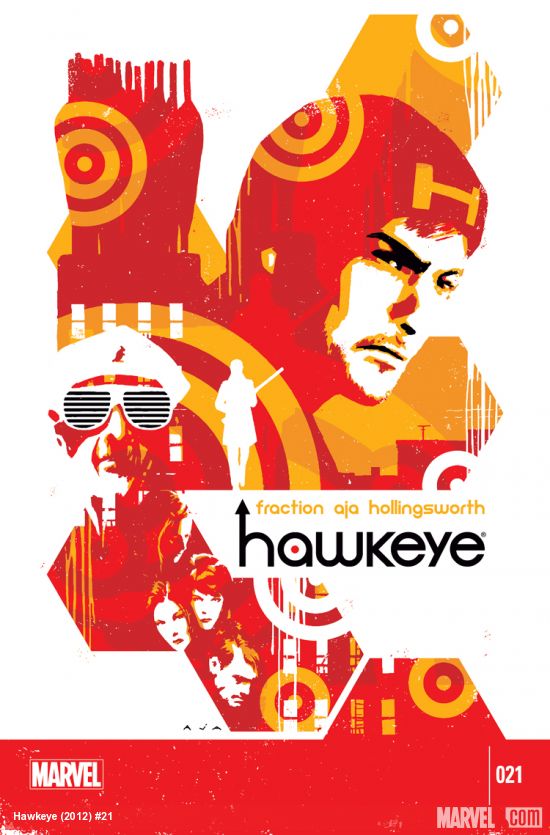 I don’t even know where to begin with the level of excitement for this issue. This is the issue the cyber streets been wanting for MONTHS. Matt Fraction has laid out a story for us with multiple angles from different character perspectives. It all culminates into part one of the highly anticipated conclusion to the series and my….fucking…gaaaaawd it goes so hard. You need a song in the back to read through this issue. I went with letting Fiasco’s “Mural” knock. When I was finished reading I realized that Matt Fraction and David Aja have given us the comic book version of the Detox Album.

Is Clint here? Is Barney here? Is Brooklyn here? Well fuck lets get it then. My god, Matt Fraction gives us the set up to the battle we been waiting for. This is Fraction at his best as we now see Clint Barton getting his arrows right, bow right, ready for fuck boys. This issue revolves around Barton choosing to fight back against the “Tracksuit Draculas” that have been giving his community grief. We got Barton getting his house in order and realizing it time to right some wrongs before this all plays out. 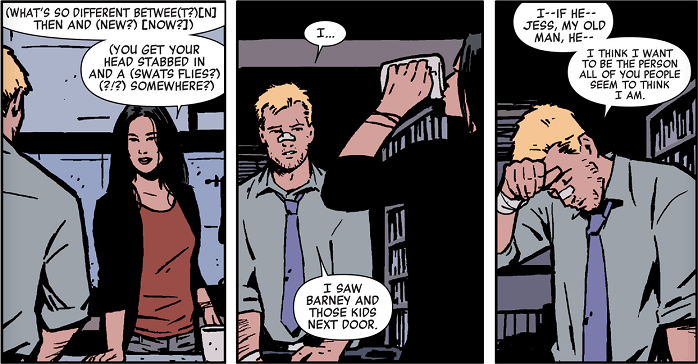 The way got Fraction and Aja working in unison to show conversations from Clint’s perspective with him filing in the gaps for what people are saying is incredible. It’s such a small detail but the execution in expressing the hardness of this deafness with Clint now is such an incredible feeling as we see him make amends with Jess. The rest of the issue deals with the various emotions of the neighbors that stayed to defend their building with Clint and Barney in (as it will come to be known) The Battle of Bed-Stuy. We’re seeing whats going through the neighbors heads that chose to stay and fight, we’re getting the tracksuit bros piling in, and of course return of the hitman that got Barney starring in life alert commercials and let that thang (gun) bang out and rang out Clint’s hearing. The Clown back up in this muh fucka playing for all the keeps. 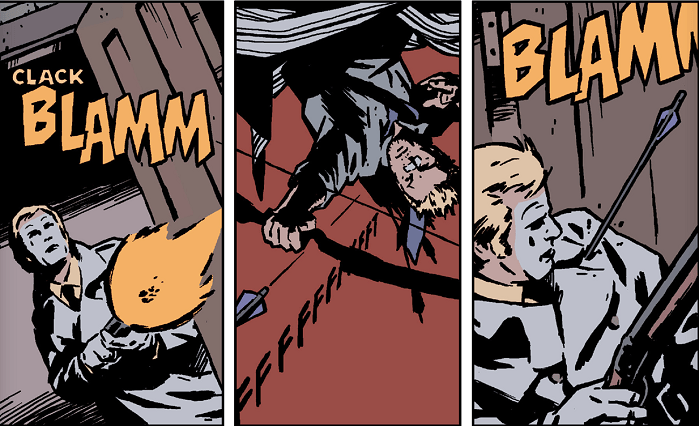 Aja’s art got this feeling like a major motion picture out here yall. This is dark, gritty, modern day noir at its finest. My man highlights action like no other. When you see folks catching bullets or getting punched in the face, you get this visceral “OoOoOooOughhhhhh” reaction from the art that causes you to cup your first over mouth because you can fucking feel that shit in your bones man. Aja delivers on the pacing of this so beautifully that it’s well worth the wait. Fraction and Aja have carved out a special piece of the marvel universe that is Clint Barton territory. This issue has plenty of action but there’s that pathos man. Fraction will catch you with that pathos every damn time.

This series has been spectacular from start to finish. This is the hard shit the comic book game needed. This is what the hood, the cyber streets, the whole foods and the fuckin…the fuckin… galaxy needed right now. Fraction and Aja ahve created a legacy with this (IDC, IDC, IDFC) and they aren’t even done yet people.