Ever since I saw the first two seasons dubbed on Hulu, I have been trying to get everyone that I know (and a surprisingly number of people I don’t for that matter) to watch an anime / read the manga of a Japanese high school boys volleyball team because: 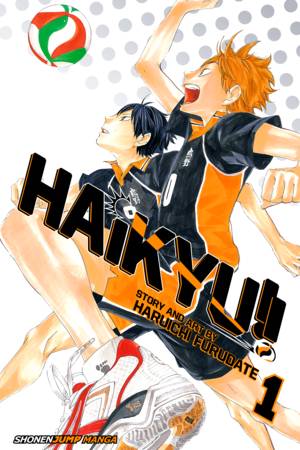 And the thing is, on July 19, 2020, the 402nd chapter of Haikyu!! rolled onto my VIZ Media app. Hence, I scrolled the finale of the series on my phone that Sunday and the only thing that kept me from bursting out into a comical wave of tears was the knowledge that the back half of To The Top would be airing in October.

And if you’re just learning about Haikyu!! for the first time in this article, here is the bare minimum you need to know about it to understand where I’m coming from (and if you are familiar, you should be aware that there are some mild spoilers in the form of out of context panels from later chapters of the manga below).

Haikyu!! is a shonen series about the members of Karasuno High’s Volleyball Club, focused mainly on Shoyou Hinata, the red headed protagonist (because it’s a fundamental facet of reality that all shonen protagonists need to have readily identifiable hair). Despite Hinata’s short stature, he has incredible athletic abilities that – when paired with his former rival turned teammate Tobio Kageyama, a veritable volleyball prodigy – allows him to perform a devastating “quick”, or unexpected attack during a rally that happens… well, as quickly as mostly grounded sports anime can get. In conjunction with Kageyama’s precise sets, Hinata is able to attack from any position, at any angle, at any time. His mere presence on the court is enough to cause a massive amount of information overload.

I mean imagine. Trying to keep track of one person in the crowd. Trying to account for all of the different possibilities. Trying to keep a rational thought process at the threat of an unquantifiable, unknown variable. Trying to react quickly to a new change, a new threat, the rustling motion of a restless agent that can attack…

from any position / any angle / at any time.

Although, if I had to guess, you don’t have to imagine too hard.

A while back, I was reading Chapter 362, in which Karasuno is up against a team that is infamous for their blocking prowess. After chapters of build up, their once impeccable, impenetrable formation falters in the presence of Hinata’s quick attack. 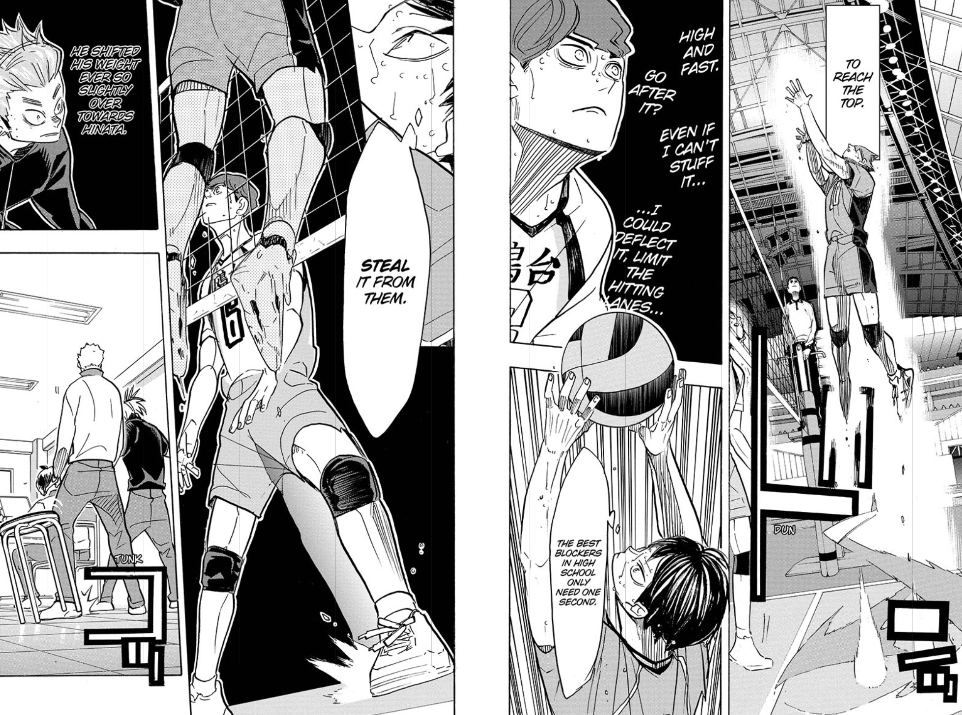 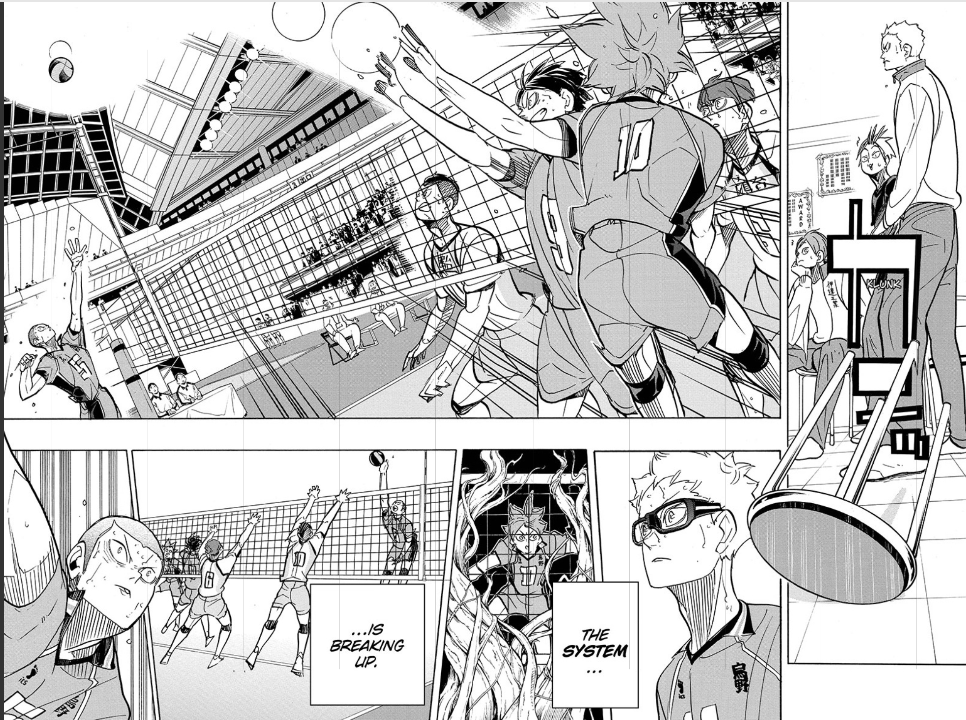 That sentence, that sentiment has been reverbing in my head months after after reading it.

In the face of a force that can seemingly appear anywhere at any time, in the face of trying to process a constant stream of information, how can the system not falter? How can the methodology withstand the constant barrage while trying to account for… everything.

In light of a global pandemic, in a time where we presented a ceaseless stream of news infinitely scrolling timelines that evolved from RSS feeds, it’s hard not be endlessly exhausted. It’s not not to be out of breath just trying to stay up to date. There’s an innate desire to want to know things, to be able to react to the appropriately, but there is still the possibility we react incorrectly.

Haikyu!! is a series about high school volleyball, but there is something fascinating in how Haruichi Furudate’s hyperbolic knowledge of the sport acts as a prism through which I’m able to process other things in the world. Near the start of the quarantine, Bread Unnie, the captain of South Korea’s national women’s volleyball team, reacted to the climatic final volley that concluded the second season of the anime adaptation.

You’ll notice how she acknowledges Furudates’s care when it comes to certain techniques, reactions, the way the storytelling interacts with reality and vice versa. But it’s documented proof that Furudate has made the specific accessible. It’s evidence that the deeply personal can eventually dives so deep that it reemerges as universal. And it’s why I’m not entirely surprised that I’ve been coping this quarantine by rewatching and reading this series.

But let’s wind back the clock nbriefly to Chapter 346. The rival roaches have changed their starting lineups in response to the events in the first set. Their questions echo. 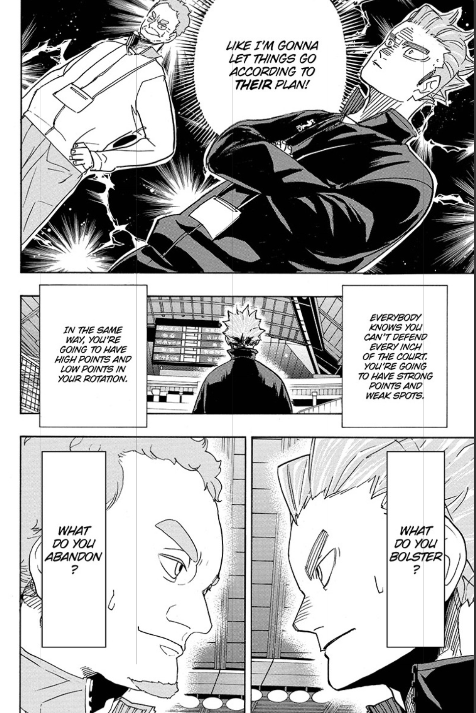 I’m thinking about the war of attrition I’ve been waging since March. Finding a mask that I feel comfortable using and reusing. Accepting that I’m not going to be anywhere near as productive at my day job. Buying frozen food because I don’t have the energy to cook. Opting to still go to the grocery store once a week even if I get (ir)rationally angry at the other customers refusing to wear masks or social distance because I can’t possible keep cooped up in my house for 100 plus days and counting and counting and not go a little stir-crazy.

Forgiving myself from being distracted and angry and sad. Forgiving myself for accepting an invite to a socially distant barbecue. Rebuilding communities over Zoom meetings, Slacks, and Discord servers. Making sure to get enough sleep. Reading the news in sprints. Remembering to share good news and bad news in equal measures. Celebrating the tiniest of victories. Using the losses to drive myself.

It’s been an adventure to say the least. But I am reminded of the recurring refrain in Haikyu.

Volleyball is a sport where you are always looking up.

It’s a sports shonen. There’s no such thing as a blowout for the main characters. Each victory or loss takes chapters upon chapters, unfolding one week at a time. There are only close games. But the characters never let it bother them. The characters shrug off the weight of the world time and time again.

It’s that type of eternal optimism, of self-perpetuating confidence that I find truly admirable. A tenaciousness to keep looking up, looking forward no matter how difficult repeating the sames actions over and over again is.

I keep using the short of 100+ days, but I know it’s well over that by night, largely due to Animal Crossing, and I think spending the majority of that time alone has rattled more than I was willing to admit to myself during Day 1, than Day 10, than Day 50.

I kept thinking to myself that I was lucky. I moved out of downtown and into a new home in August 2019. I was hospitalized and discharged in February 2020 just weeks before Covid-19 shutdown my city.

But there’s an empty guest bedroom that’s supposed to host a rotating series of friends this summer. My dining room table has devolved into disarray from disuse, although I have become familiar with my kitchen since I’ve essentially eradicated eating out.

At my most recent appointment, my endocrinologist looks at my chart before asking me “Do you get any sun? Your Vitamin D is so low, it’s practically non-existent on the labs.” And I laughed and said “no, not really.” But then I remember that lab was taken in April when quarantine first began.

Furudate tells me that fortune favors the prepared. And there are victories, sacrifices, and happenstances of all sizes that happened and will probably continue to happen as I try to stay stable.

Fast forward this time to Chapter 373. There is a simple meditation.

You have to “connect.” 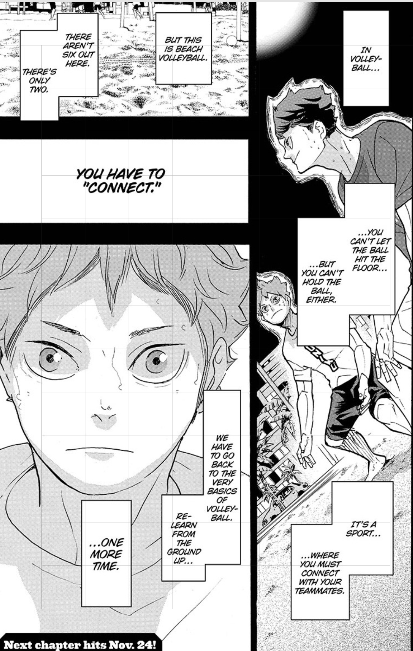 Every single character in Haikyu at some point learns the lesson that they aren’t alone on the court. That there are five other players working with them. That they don’t have to do everything themselves. That it is okay to rely on their friends.

The world today is on fire, but I’ll be the first to admit that the cinders make for an awfully good signal flare. There have been friendships discovered and rediscovered in this time of weekly Zoom calls, Google hangouts, digital game nights, and server chats.

It’s so easy to want to retreat further inward, to isolate even more, to stoically brave reality alone. But we’re not alone in the deluge, in the conflaguration. We’re all trying our best and finding comfort where we can. For me, it’s this fictional Japanese high school boys volleyball team, and I’m convinced it can comfort y’all too.

One last flashback. All the way to the season 1 finale.

I did end up ordering curbside pick-up take-out for the first time in forever for my birthday. It was Filipino comfort food from my favorite restaurant that I hadn’t been to in ages. I drove home and ate it and cried. Not for one particular reason, but for a dozen disparate ones. for the loss of normalcy, agency, and control. For lacking the superhuman ability to process the million things that are all happening at once.

I watched a random episode that night. I don’t think it was the season 1 finale, but I did think about that scene, that moment. About the importance of eating well, of refueling after a tough loss or the perpetual losses.

I think I’m more thankful than I could adequately explain that I had and have the ability to read chapters of Haikyu!! and see Shoyo Hinata and Tobio Kageyama grow up into the volleyball players they eventually became. I think it’s a hallmark of great storytelling that I, a pop culture omnivore without a single athletic inclination in my body, can still appreciate the narrative arc of a volleyball series with such revere. That I am able to see myself in an adjacent, if not drastically different, struggle of these characters for 402 chapters and 60 some episodes and counting.

That I am able to summarize it all with an elegant mantra, a sentiment that echoes in my head like a volleyball spike in a court. A strange call and response.

What do you do when the system is breaking up?