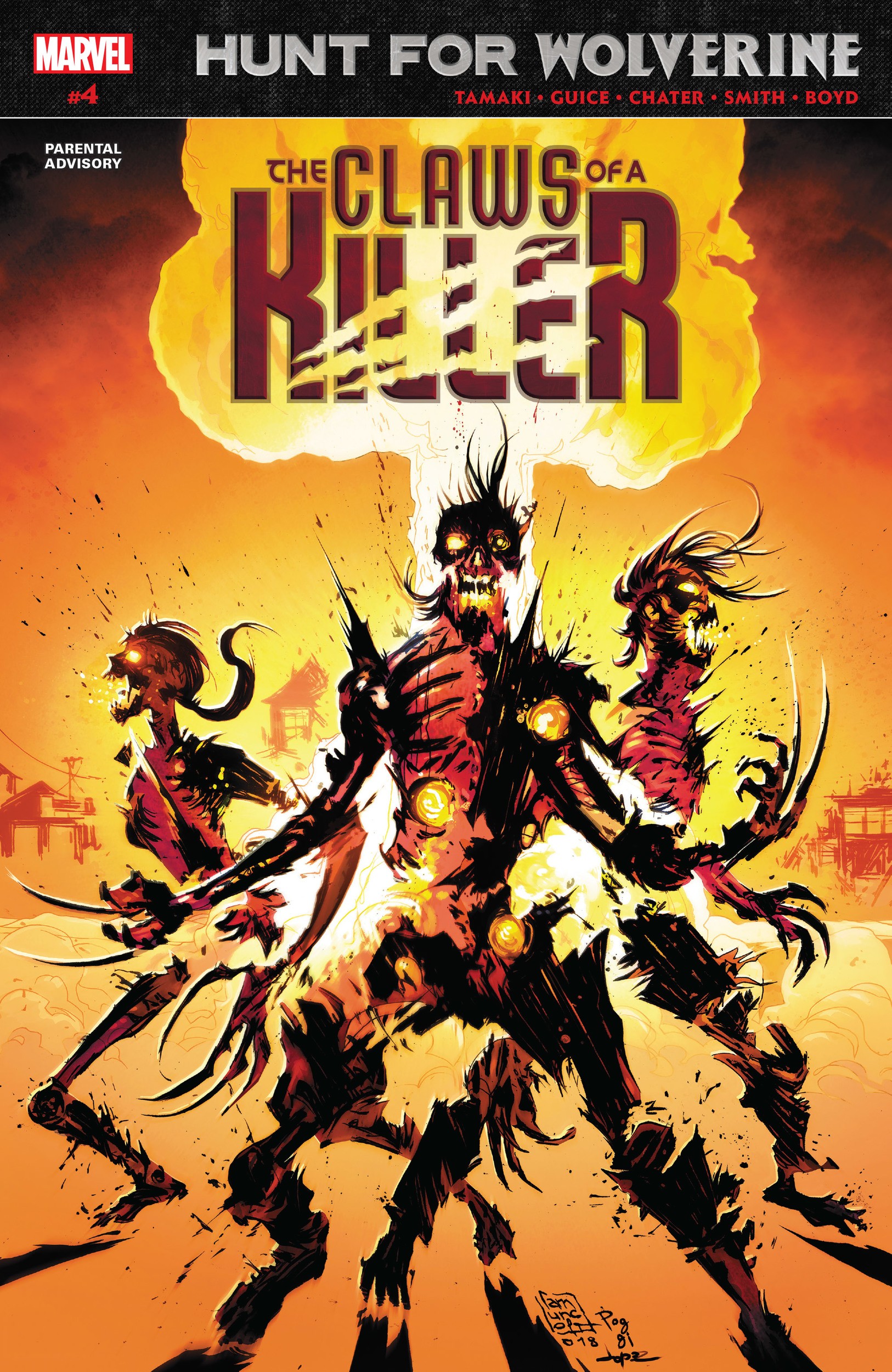 All Paths Lead to Dead Ends

Small town Arizona ain’t what it used to be. As the final issue of the “Claws of a Killer” opens, Sabretooth and Lady Deathstrike are trapped in what appears to be the worst of “Lose-Lose” situations. Trapped in a town that is the subject of an experiment by the Soteira agency, their healing powers have been negated, Daken has been killed,  and now two of their assumed dead loved ones have returned to torment them. Sabretooth, ever the king of cats, reaches his boiling point and is ready to level the entire city rather than end up as a mindless zombie.

The issue begins with Sabretooth and Deathstrike caught in their own personal battles. Graydon Creed, human son of Sabretooth and founder hate-ground The Friends of Humanity, returns while Deathstrike fights against her own father.  Sabretooth, eager to abuse his hatemonger zombie son once more, takes more of a beating than expected, but prevails with the help of Deathstrike.  He blames her for leading them into this trap, and he is well justified.  Upon her own battle with her Soteira controlled father, she learns that the adamantium signal that led her to Arizona belongs to him and not Logan. In the ensuing battle, Deathstrike is unable to hold out for long without a healing factor and loses her hand at the blade of her own father. 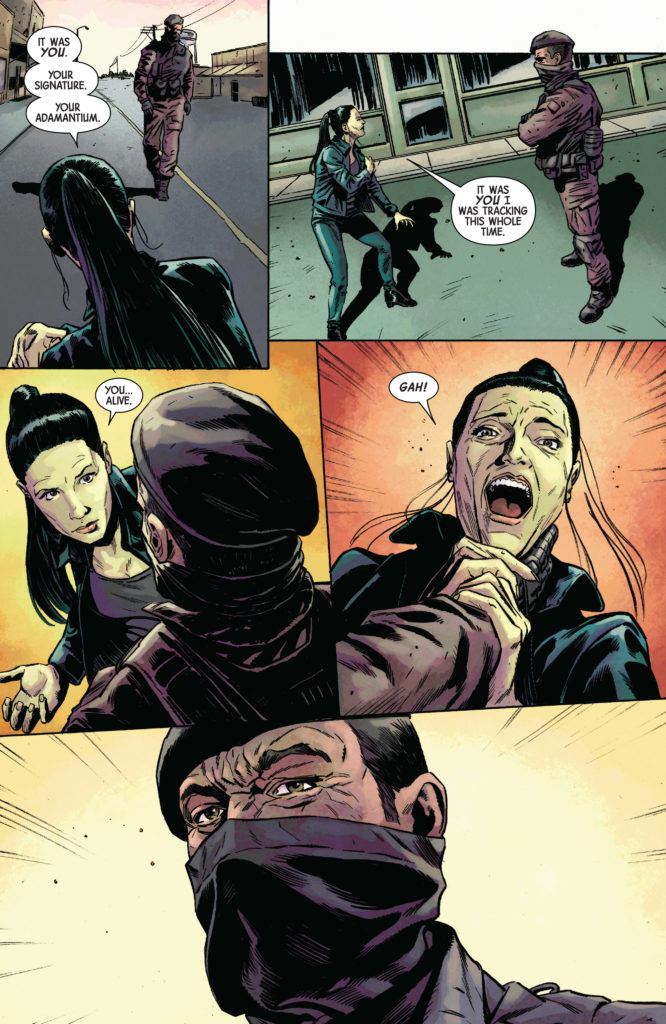 The agenda of the agency known as Soteira is slowly revealing itself over the course of the various mini-series. In “Weapon Lost” #4, Daredevil’s team recovers a dossier of digital information just before Soteira was able to purge any evidence. When Cypher decodes the contents, they are faced with video and photo evidence that shows Wolverine both very much alive and under the control of Soteira as an assassin. Daken’s body, presumed dead after being impaled in issue #3, is recovered by Soteira and on its way to becoming a new weapon. Meanwhile, Sabretooth, not one for easy deaths or sentimental goodbyes, decides that risking Deathstrike’s and his own life, is worth blowing the entire town to stop the spread of mindless drones. 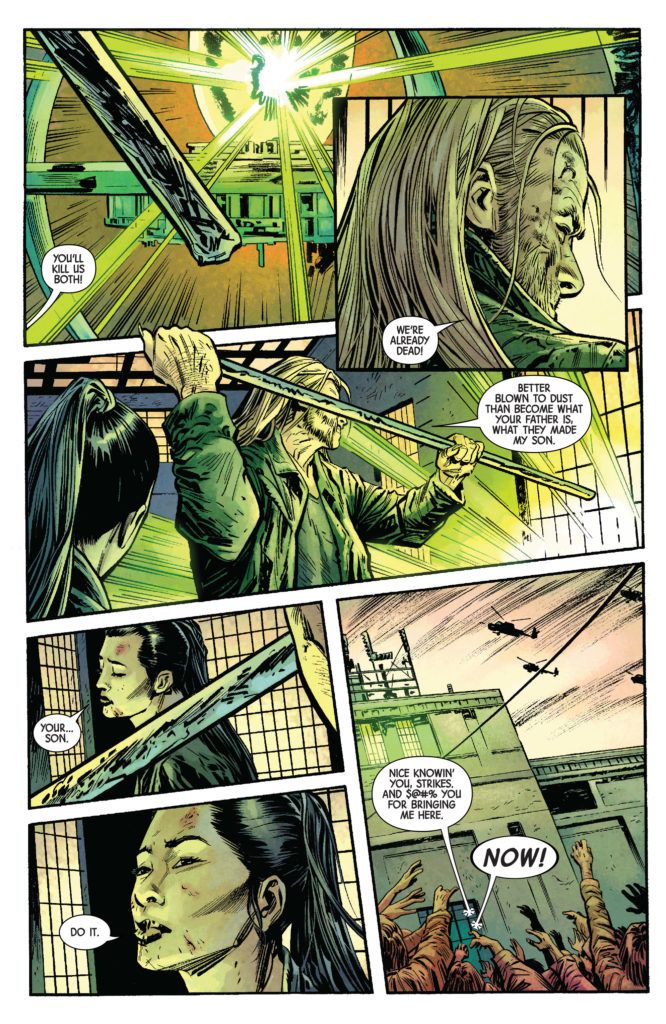 “Claws of a Killer” ends on a strong note with surprising results. Confident in tone, style, and a hardcore roster of adamantium laced killers, creative team Tamaki and Guice feel right at home.  Visually, Guice’s linework for character details and backgrounds are unmatched amongst the four Hunt for Wolverine miniseries. The interplay between Guice’s arts and Colorist Jordan Boyd’s work creates a distinct comic that feels like “28 Days Later” meets “The Proposition.”  Instead of catering to the tired zombie tropes of late, writer Mariko Tamaki steers the narrative to a place where the major revelations are emotional and character-centric rather than merely a checklist of objectives from additional supervision.   We have not seen the last of the Sabretooth, Deathstrike, or Daken, as their fates are sure to collide in the upcoming conclusion, “Hunt for Wolverine: Dead Ends.”

For more of Tamaki’s work, check out the new X-23 series which features Laura Kinney reclaiming her first codename and mentoring her sister/clone Gaby.