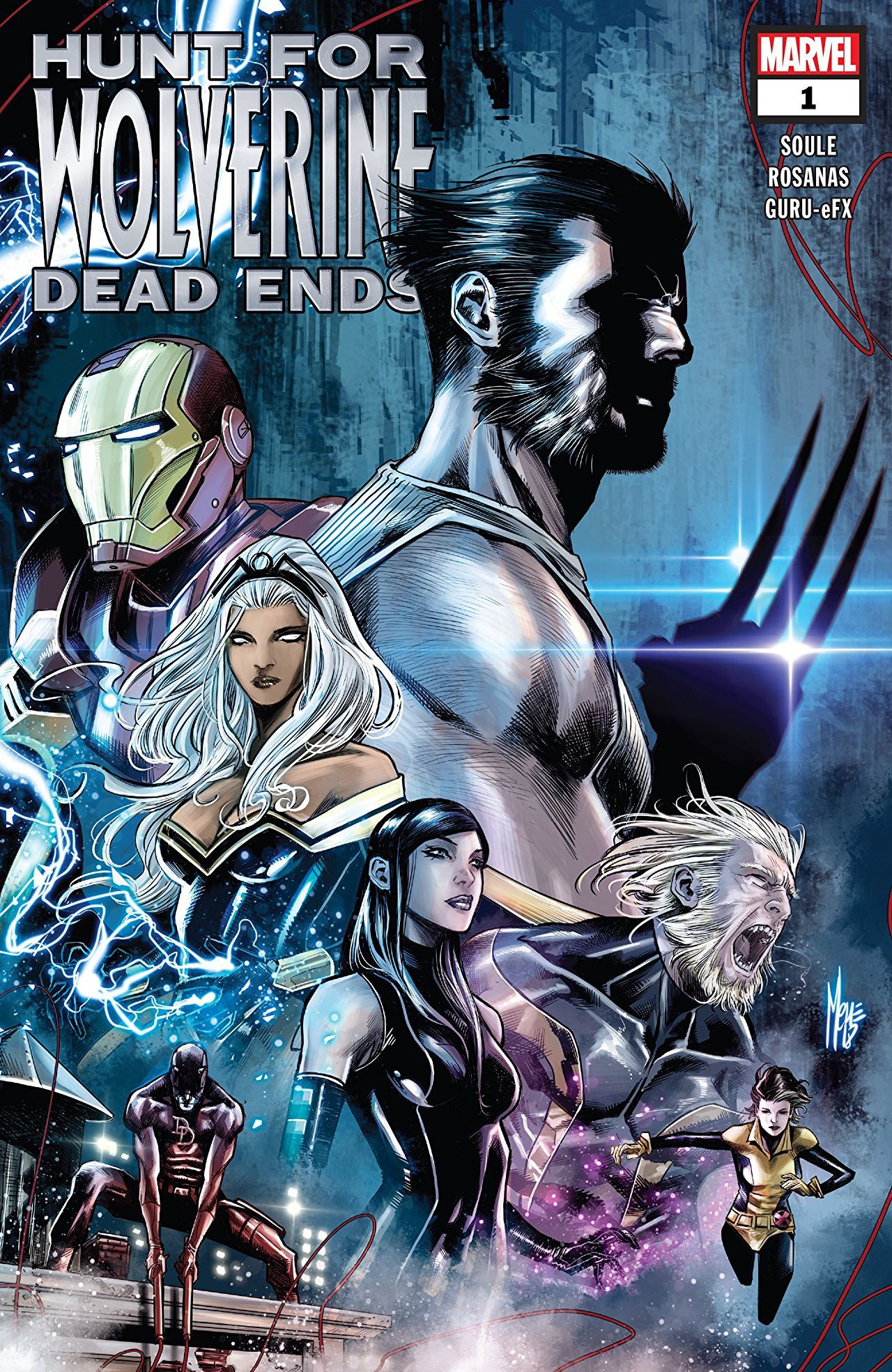 Summer’s over, and school’s back in session.  Following four months of search parties (or kill squads), Kitty Pryde summons Daredevil and Tony Stark to the X-Mansion for a post-mortem on the Hunt for Wolverine.  As the title of this one shot states, all clues lead to “Dead Ends.” Just as Kitty, Stark, and DD reach an inconclusive conclusion, the mansion comes under attack from space. Soteira and the new Big Bad strike again.

Tony Stark and Daredevil arrive to the Central Park-based X-Mansion at the request of Kitty Pryde to share information gathered from their investigations. She leads them through the multi-million dollar mansion to present a powerpoint “made by one of the students for extra credit.”  Pryde’s team in Madripoor accomplished very little aside from learning that Soteira uses the island nation as a launching pad, and that clearly the organization has deep pockets.  She also shares information passed on from a “conflicted” Sabretooth that Soteira has technology to neutralize mutant abilities and turn people into zombies (see Claws of a Killer series). Stark, telling of his encounter with Mr. Sinister (see Adamantium Agenda series), reveals that Soteira also holds a copy of the DNA database for the entire world’s populace.  Not to be outdone by bad news, Daredevil actually has current intel on Logan.  Based on the data hacked by Cypher, Logan appears to be working as an assassin for Soteira (Weapon Lost series)

As always in the land of mutantdom, bad news, bad timing, and more bad news go hand in hand.  During their meeting, Daredevil senses high frequencies from above, alerting the X-Men that they are under attack from space-launched projectiles.  Kitty takes charge, sending the teleporters to evacuate the mansion and dispatching the mutants with the flying capabilities with Iron Man to head off the projectiles.  Unable to stop all four at the same time, Kitty devises a risky, but ingenious plan: stopping the fourth impact by phasing it through the earth and letting the magma at the Earth’s core dissolve it.  No harm, no foul. Just a little earthquake. 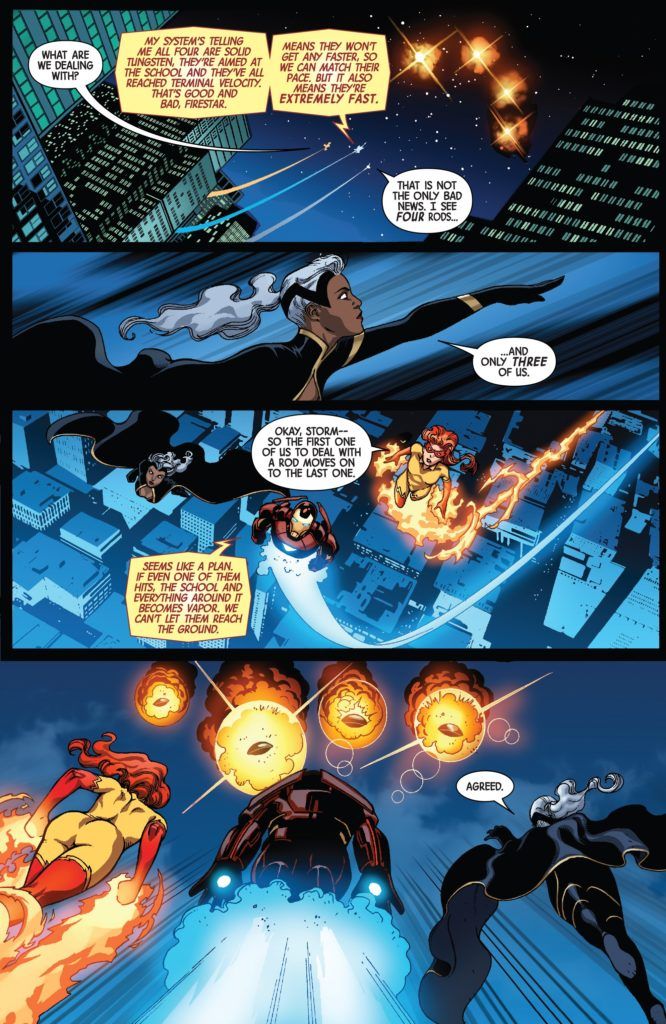 Even when they think the crisis is averted, ten dead bodies covered in white sheets appear on the grounds of the school, carefully organized by a man dressed in white.  Merely a puppet, he introduces them to Persephone, the head of Soteira. She genuinely commends the heroes for their efforts in saving the world time and again, but warms them of any further interference in the work of her organization. Each of the bodies before them belongs to a person with the X-gene yet to manifest. While the X-Men use Cerebro to find mutants who manifested the X-gene, they have nothing that can protect potential mutants.  When Persephone no longer needs her vessel to communicate, his body drops dead on sight as she vanishes.  The X-Men are stumped. Back in her own headquarters, Persephone confronts her VIP Prisoner: Logan debuting the #HotClaws. 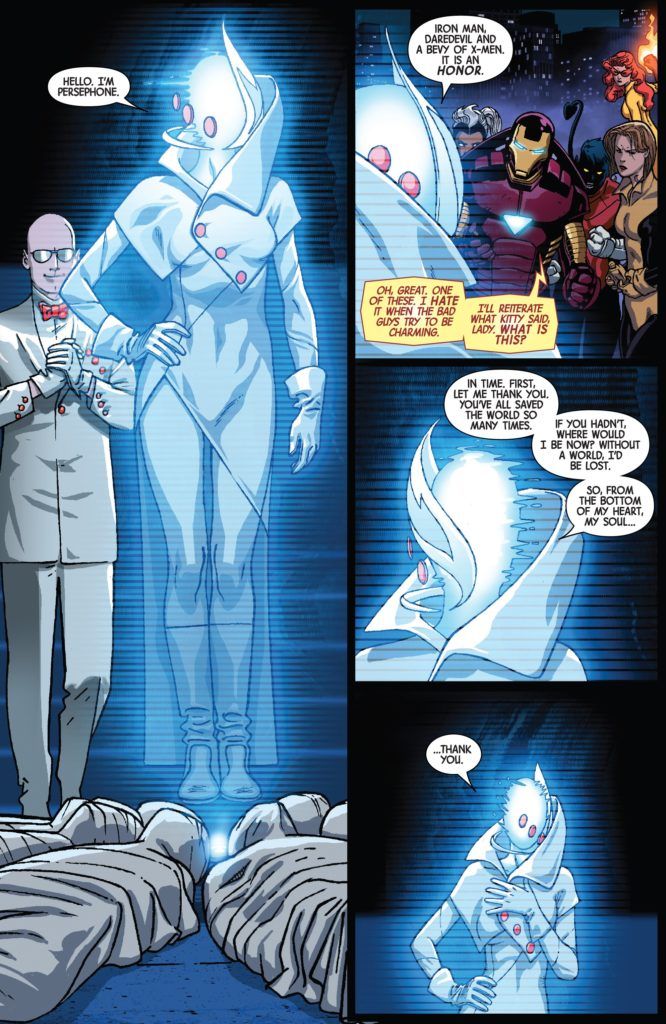 This issue finally reveals the new Wolverine/X-Men “big bad” known as Persephone.  As the head of Soteira, she has been pulling the strings of the Reavers, the X-Men, Mr. Sinister, and the world at large for some time to meet her still-unknown ends. She seems to be a compelling character that could definitely make the following mini-series a good read. Also, Tony Stark still has not revealed that he discovered one of the X-Men is potentially a double agent.  His surprised reaction to the “re-Anglo’d” Psylocke was warranted, but it could also tie in to the mystery of the fake mutant. We should also anticipate to see this play out in the coming Uncanny X-Men relaunch “Disassembled.”

Standout X-Moment: Kitty Pryde using her powers to literally phase the earth. Since Kitty Pryde has taken the leadership role of the main X-Men squad in 2016, the writing staff has come up with some amazing ways for Kitty to use abilities, evidence of both her growth in using her powers, but also her confidence.

The title of this concluding one-shot to the Hunt for Wolverine “event” is more accurate than it intended. As a narrative in itself, “Dead Ends” holds very little weight. Instead, it serves as a summation and jumping-on point for readers who may have skipped the prior four-part mini-series. If you are looking for a comic to lead into September’s Return of Wolverine, then this your issue.

Since returning in last November’s Marvel Legacy one-shot, Logan has been seen in various “Where is Wolverine?” bookends and even travelling with an Infinity Stone.  At this point, X-fans are hoping from a dignified return and reunion with his mutant brethren, but thus far it feels anticlimactic. The seemingly endless build-up and the great stories being told with X-23, Gabby, and Old Man Logan almost make the return of OG Wolverine more laborious than joyous.

6.8 out of 10 Xavier Student Powerpoints