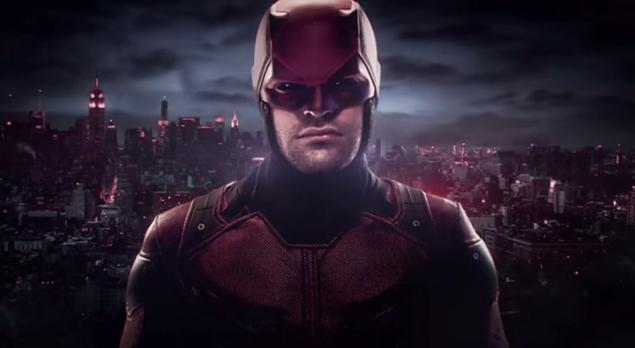 Lemme, start this shit off by saying this, “Y’all don’t know my struggle…, you can’t fathom my love.” Why do I say that? Lemme take y’all back to the beginning. I’ve been a Daredevil fan since high school. Brian Michael Bendis and Alex Maleev’s run on the Daredevil comic series? Pure art. The highest form of art. That shit is still peak gospel story telling to me years later. Daredevil was my fucking guy, where everyone was loving Spider-Man during lunchroom I’d be telling them, Parker cool but my man Matt Murdock? This Blind Lawyer fighting crime? Using his 360 degree radar sense to “see” and parkour off rooftops? Goat. Fam, you know how many times I got laughed at for that statement? My best friends ridiculing me in my persons.

“A blind guy being a hero, Omar? That shit can’t happen.” Why, because he’s a lawyer?! “Yeah… first of all, that’s the most unbelievable part, they ain’t saving a damn thing pro bono. But a strong second is the blind part. I’m not buying it.” Well I don’t see Bill Gates, Steve Jobs, dressing up to fight crime and they millionaires, so how am I supposed to take Batman seriously? (Yes, this is the origin story of my Batman disdain.) 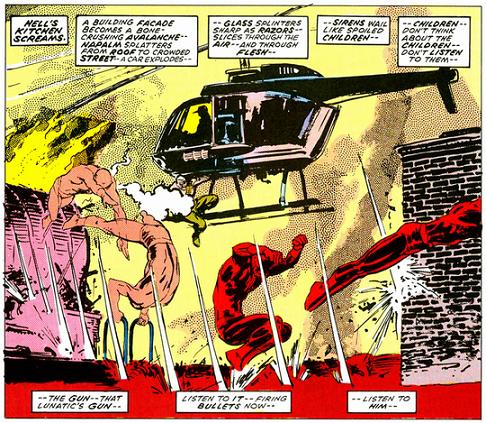 Then it happened, 2003 my man was Matt Murdock was getting a movie. I was hype. I was ready. My guy was getting his shine and the world would see, Murda Murdock deserves that spotlight from Marvel… Look man I thought it was a B movie despite Ben Affleck and Jennifer Garner’s playground fight (forever now known as “playground gate”). I thought it was alright, but that laughing didn’t get silenced. Fourteen years. I had to wait fourteen years for redemption. Fourteen years of hearing jokes. 10 x 2 – 6 years of ridicule from peers. XIV years until Netflix would produce their first season of Daredevil and have the homie Murdock shut the game up and take the crown back for noir street action.

Now, post Defenders, Daredevil is getting a third season and we may be getting the Born Again storyline? We saw so many references to it in Defenders, it’s the only logical choice. Especially with the final scene of Matt that we saw. If we’re getting Born Again, I don’t even know what I can do with myself yo. 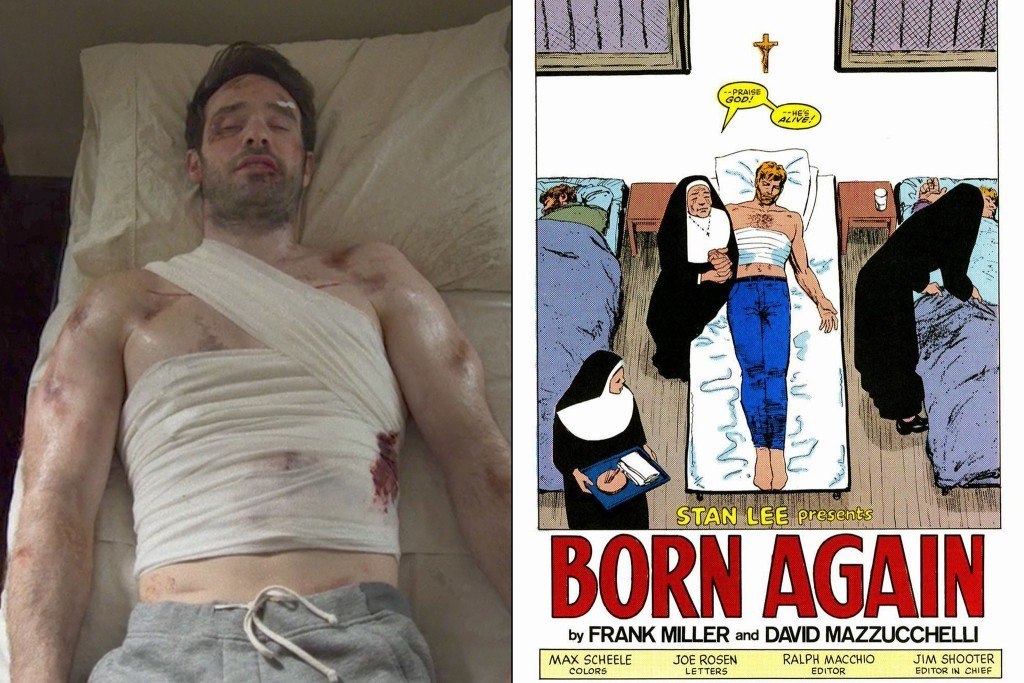 Born Again is the story that put Matt Murdock back on his bullshit. Born Again is Marvel’s version of Dark Knight Returns. Literally, because both were written by Frank Miller and dropped in the same year (1986). Let it be known that David Mazzucchelli delivered the god tier noir artwork for Born Again. Mazzuchelli’s art is the blue print for gritty street noir as far as I’m concerned. Frank Miller and David Mazzucchelli got the green light to take Matt Murdock back to his roots in order to stand out in the Marvel universe. To do that Murdock had to go lower than he’s ever gone. We see Matt at his lowest point as Wilson Fisk (knowing damn well who Daredevil is) decides to put his foot on Matt’s personal life. Fisk started fuckin’ with Matt’s money, building, everything to break Matt.

I’m really just giving y’all a portion of the real rap raw. Murdock goes through a psychotic break with his religion playing a big factor in the story. I just need you to trust me, that this is peak action, story, and character development. This is real destroying your arch-enemy shit from both Wilson Fisk and Matt Murdock. If there was ever a battle between good and evil being played out on a street level, it’s right here. This shit is peak Ivan Drago “If he dies, he dies.” It doesn’t get anymore cold blooded than the war between Fisk and Murdock in this story. 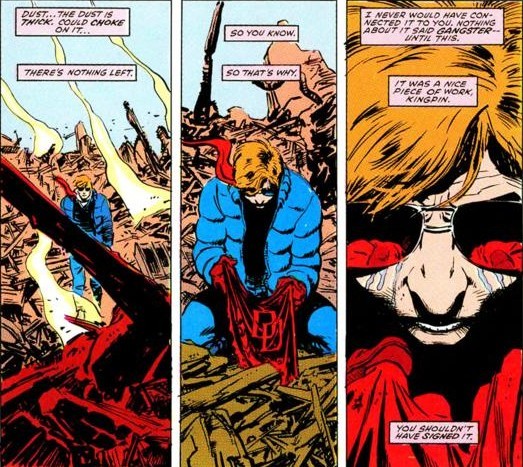 As much as this is a story about revenge, redemption, and conquering… at the heart of the matter, this is a story rooted in forgiveness. Listen, if you don’t know this story y’all not even ready broski. I read Born Again in high school and was floored. To read a story arc that hard hitting from the 80’s and that shit still standing the test of time in the 2000’s? Born Again is what made me realize the importance of having a body of work being so well crafted that it stands the test of time. I seriously, suggest reading the arc before watching Season 3. 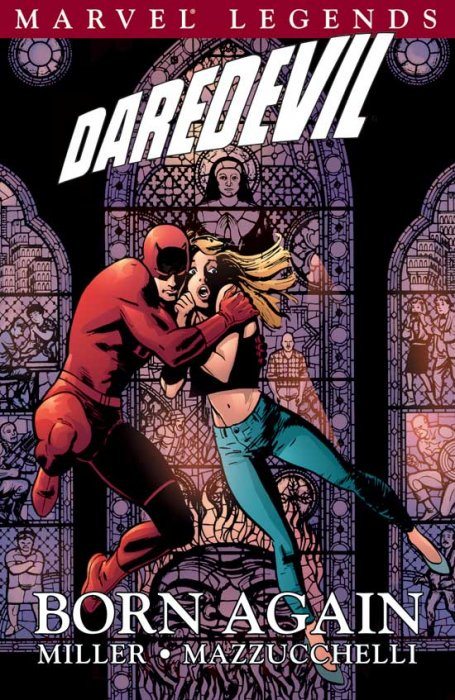 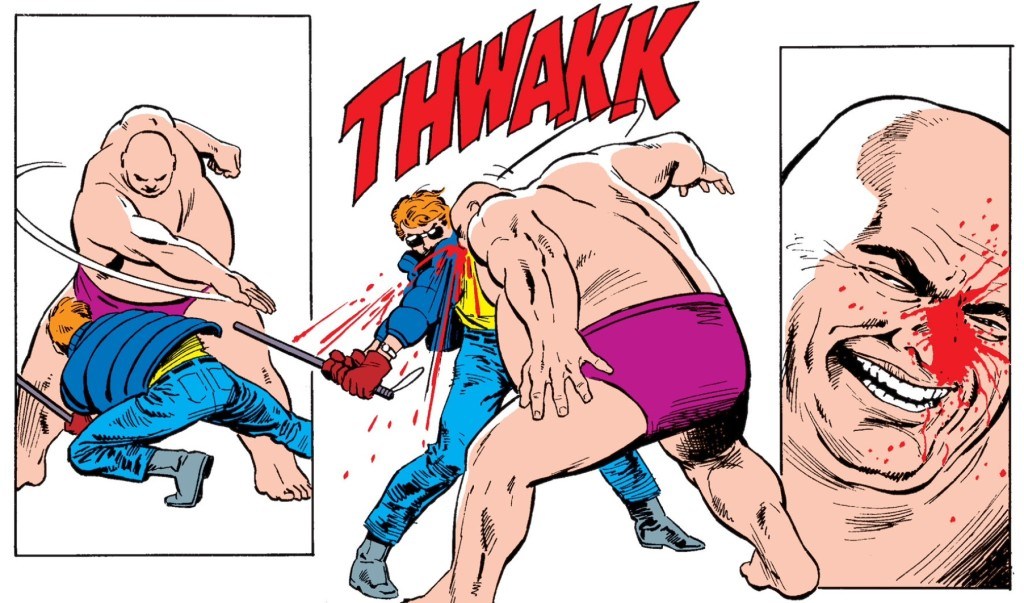 I’m not done yet, fuck a rule of three. Remember when Lupe Fiasco said, “HEART COLDER THAN EDYS / WON’T LET THE SEEDY CITY DEFEAT ME/ RUB ME OUT LIKE GENIES, WON’T CONCEDE TILL I’M GRAFFITTI, N*** WHAT?! I ONLY FEAR GOD! KNOW THE WEAPONS OF THE WEAK, THE WEAKNESS OF THE HEART / AND NEVER FALL ASLEEP”? You remember when Lupe said that real ass trill ass shit in that haunted looking hallway?! You remember that shit?! That’s DARE-FUCKING-DEVIL. BORN-FUCKING AGAIN. This is only the hard shit.

I love seeing characters that weren’t a household name become a household name. That’s why I roll so hard for characters that could be considered second string or obscure or not as popular in mainstream media. Daredevil was definitely that for the longest until he started doing pull-ups on the bar of what motherfuckers thought was real rap. I’m a huge fan of the Netflix series, I love the writing, I’m fucking with the characters, I’m still mad as hell they killed my guy (and the hardest actor on the show) Ben Urich. I’m still salty about that but Daredevil is still my favorite Marvel adaption to television. 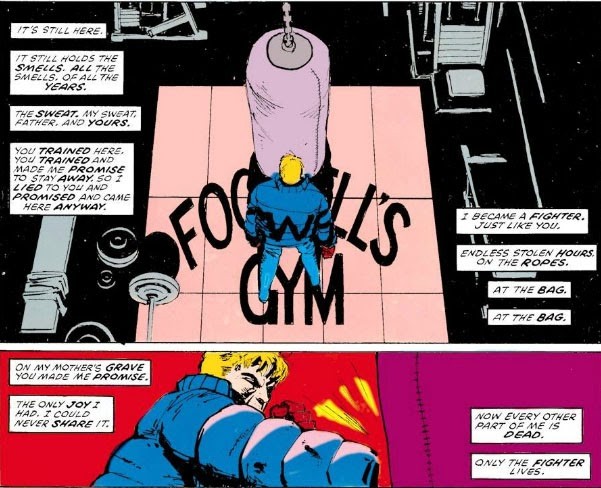 I know Born Again is a such a fucking gritty noir story, I’m really not worried about Netflix’s execution of it. If they can take Murdock to the depths they did in Season 1 and the dark tone of Jessica Jones then this story line should be good. Even if it ain’t perfect, I’m still happy to see the effort being put forth. The Devil’s of Hell’s Kitchen finally getting the shine he deserves.