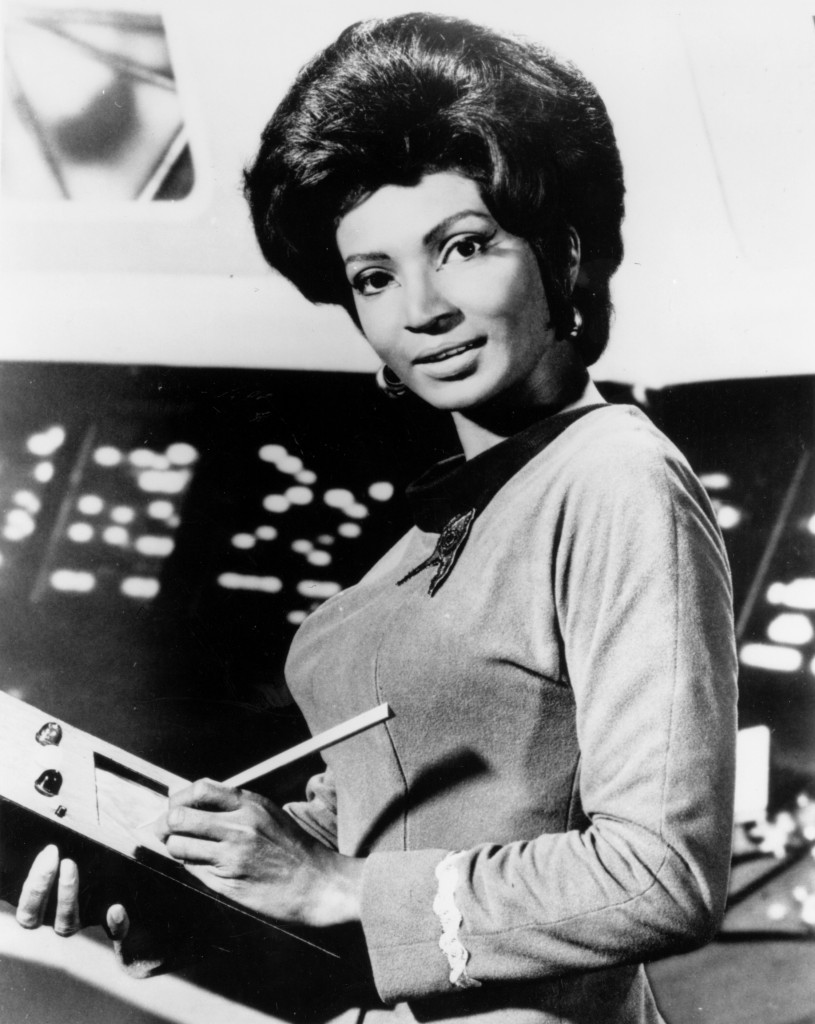 I am a Star Trek fan for a number of reasons. It is the first Science Fiction property that I loved all by myself, and it remains a personal joy, something I watch alone late at night when nothing else will do. The original crew of the Enterprise remains “my crew”, as much as I may enjoy any of the other collections of humans and aliens who have come and gone since I first started watching re-runs back in the late 70s. Even with my love of the series, I left the most recent movie, Star Trek: Beyond , with a sore spot in my heart for everyone’s favorite Communications Officer, Nyota Uhura. I enjoyed the movie — the settings were larger than life, the villain had that perfect twist of compassion at the end, Chris Pine (of the three great Chrises: Pine, Evans, and Helmsworth) and the gang did a good turn at roles that are as constrained by fan expectation and canon as any can ever be.

But still, I was disappointed as Uhura took on the role of the “heart of the crew.” You know her. She is the woman who delivers the moral Roddenberry message at the darkest point of the plot. If a manifesto of the Federation’s higher purpose must be given, she’s the one who gives it. As necessary as this moral moment is for the structure of any Star Trek plot, I wasn’t happy that it fell to Uhura to give it while the rest of the crew were off being heroic and blowing things up. Across all three movies of the Kelvin Timeline (the reboot series) I’ve been waiting for Uhura to be awesome — awesome in some other way beyond being smart and pretty and kissing Spock.

Rolling around this disappointment, I realized that I was expecting a lot from Uhura’s character and that maybe that expectation wasn’t warranted. Did I really know her? Was I asking for her to be a specific kind of hero just because she was the only Black woman around? I knew her job, her skill set, but I didn’t know how she felt about any of it. I hadn’t ever really observed the character that the original series had given me on her own terms.

Who is Nyota Uhura? I went back to the canon to find out. 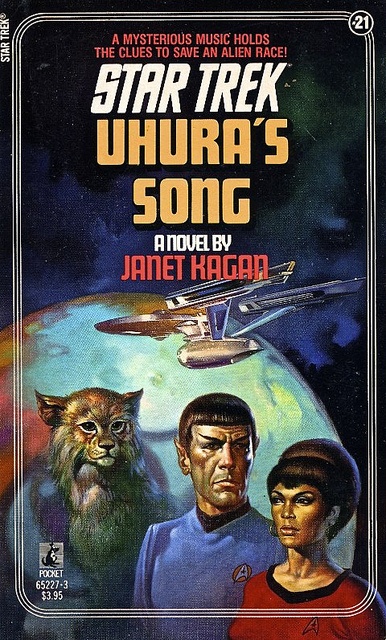 I started with the novel that bears her name, Uhura’s Song by Janet Kagan. It is entertaining in a Half-Price Books science fiction paperback novel kind of way. Uhura, in her role as a translator and musician, is the sole possessor of a series of taboo songs that hold the cure to a devastating disease that is killing its way across a planet full of humanoid cats, or feline humans. Whatever. She, with Spock’s help, uses the songs to track across 10 light-years to the home planet of the afflicted race. There the crew makes contact with the original cat people and has to convince them that they can be trusted with the culture’s most shameful secret. It is classic Original Series in plot and pacing and our heroes save everyone in the end, natch.

Uhura is revealed in the plot to be first and foremost a bard. She sings and entertains in almost every chapter of the book. She has perfect pitch, almost eidetic memory, and a deep understanding of languages, both verbal and non-verbal. All of this gives her the personality not of a stand-out, but a perfect support character. She’s the friend you want to take with you. In an interesting precursor to the Kelvin Timeline romance, she and Spock are portrayed as close colleagues. She is the only one who respects his Vulcan need for logic and peace, taking great pains to avoid getting her emotions all over him. This is unlike everyone else who seems to love to cry and scream at Spock as if that’s a thing he can do anything with. (Kirk is just one giant pile of emotional baggage, I swear.)

What else? She’s mild-mannered, even shy, and fiercely devoted to her friends, human and alien alike. She’s not blind to her differences from the rest of the crew. She refers to her Blackness once in the whole book (which is a thing for another review), using race in America in an example to the local aliens of Infinite Diversity in Infinite Combinations. She’s generally non-violent and uncomfortable in combat, even when it is to save her own life. She is far more artist and philosopher than fighter. 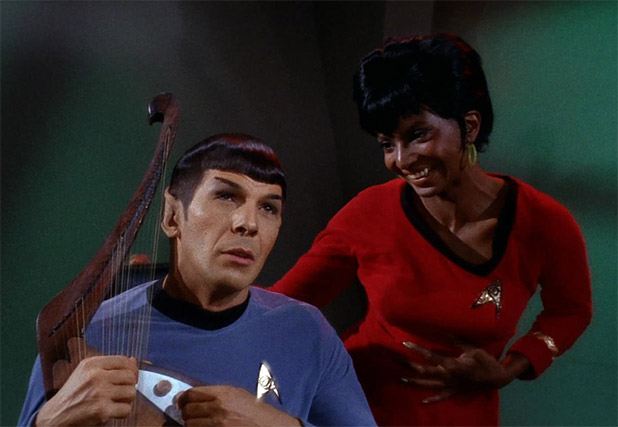 So I was getting somewhere. I dove into The Original Series (thank Bast for Netflix), watching several of the episodes where Uhura has a prominent role. In “The Gamesters of Triskelion,” she’s almost raped by an alien gladiator before Kirk’s yelling stops the assault. His yelling stops a lot of things in those old episodes. In “Charlie X,” she sings, playfully teasing Spock and entertaining the whole crew until a teenager high on white privilege and mind control ruins everyone’s fun. In the famous Evil Beard Universe episode, “Mirror, Mirror,” she distracts evil Sulu with her charms, but otherwise stays out of the way, while wearing an even sexier outfit than in other episodes. (On a sexy sixties scale of 10, all of the ‘fits in that episode rate in at an 11.) It is her love of cuddly things that kicks off the Tribble invasion of the Enterprise in “The Trouble with Tribbles.” And in the much-discussed “Plato’s Stepchildren,” in which she and Kirk share the least passionate kiss I’ve ever seen, she’s a passive object used as a tool for Kirk’s fight with the telekinetic villain of the episode. What do all of these moments and actions add up to?

Nyota Uhura is, as much as the rest of the crew, a product of the time she was invented. There’s some deeply sexist objectification going on in those episodes, my friends. But beyond that, Uhura is at odds with my expectations of “heroism”. She sings, she dances, she wears cats-eye makeup, she likes fuzzy things, she kills no one. In a setting with so few Black women, I projected what I wanted and needed onto Uhura, without any regard for the character that Nichelle Nichols so thoughtfully and purposefully portrays. I was so busy projecting onto the role-model I’d had as a child, I couldn’t see the hero that she is. She is a hero in her own way, with her voice, her art, her compassion, her love of beauty (and cuteness). I couldn’t appreciate her character fully before, but now, the Heart of the Enterprise is a representation of a particular Black woman that I am so glad to see.

All of this, in addition to letting me pass all the late summer evenings of August in binge-watching heaven, brought me to a deeper appreciation of a character I thought I knew. I hope now that the Kelvin Timeline keeps Uhura as she is, that she never becomes proficient with a phaser, never goes off on her own. I hope she continues to speak all the languages and sing all the songs. I hope the new Star Trek: Discovery brings another Black woman main character to the franchise, and develops her into another kind of hero — a Starfleet Captain we’ve all been waiting for — and that we keep Uhura just the way she is.