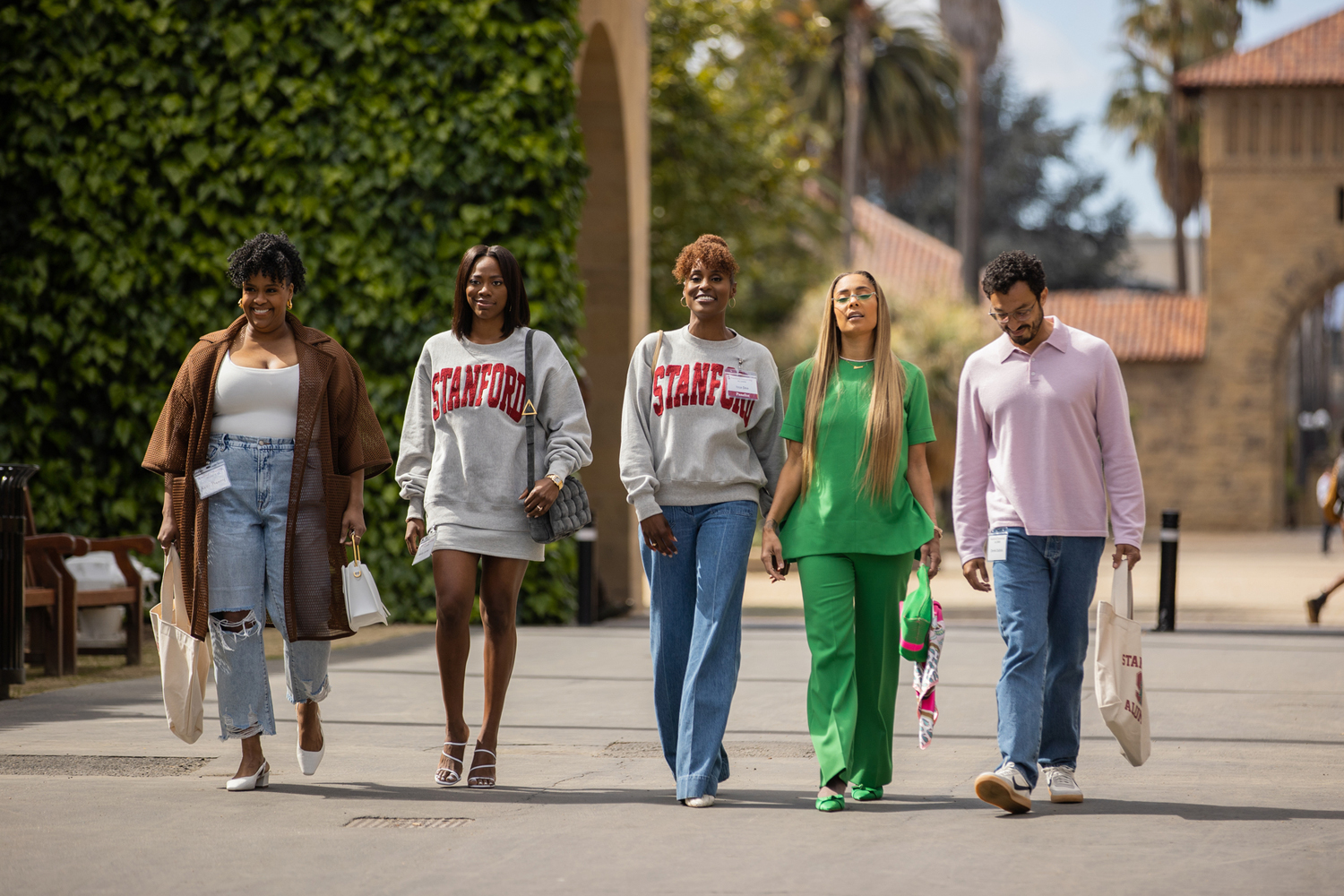 Abstract conversations on a road trip with Kelly, Tiffany, and Derrick kick off this season of Insecure in the best way possible. You know it’s about to go down when Kelly’s scrolling and trolling in the back seat. While these three plan to make the weekend all about them, Issa is stepping off the airways like a boss. Boss or not, Issa gonna Issa and jumps into the first car she sees thinking it’s her ride to Stanford. Child, you know better than to sit down in a car without asking somebody who they’re waiting for! You a whole Lift driver!

The Insecure crew back on their old Stanford stomping grounds is what alum dreams are made of, well… until Kelly finds out she’s actually there posthumously. Issa not only got “flewed out” for the alumni business panel, but she was also asked to give words honoring Kelly. Kelly kept her composure for real because I could not have seen my face in a commemorative book under some “In Memoriam” with a weak-ass quote from my homegirl, and I’m standing there all living and breathing and Black.

Yes, Issa, it’s that obvious. Your fake “hey” when you see someone you don’t remember and the fact that you and Molly ain’t vibing like you used to. It’s not bad, it just ain’t y’all, and Molly knows it. Kelly’s advice is so Kelly it’s almost incomprehensible, but it also makes sense. Friendship mending takes time. Speaking of time, it’s looking like the weekend is all the time Tiffany needs to rep her shield and colors like a neophyte. You better stay pretty. On the yard? Pink and green. At the alumni party? Pink and green. Tiff stays on brand, and we love to see it. We can’t see that tree Derrick carved your name into, but that’s beside the point.

What’s a party with all the early 2000 hits if it ain’t one sis on the floor droppin’ it like them knees ain’t a day over twenty. Oh, hey! Apparently, Issa ain’t forgotten about Shai, and we see Kelly still got it! Molly still getting set up, but this time with an old flame. It looks to be a new day, though, because Molly is cooler than cool.

Kelly keeps coming face to face with her mortality and what memories she’s left behind as she stands on the dance floor staring at her own face memorialized by the DJ booth. A stanky leg and carrying a purse cannot be the things that she’s left behind. What started out as an honest mistake is seemingly making Kelly consider her own legacy. Issa and collegiate mirror Issa seem to be doing the same. Issa hasn’t accomplished any of her prior goals and that child can’t even keep the name of her own business together. Acronyms be a blessing and a curse.

Being a panelist doesn’t seem to help Issa feel better. She’s keeping it real about finding her path. For Issa, it’s more than a path, starting the BLOCC is a risk. You can see the imposter syndrome just drape over her face while she’s being as transparent as possible and getting nothing in return. I won’t say “nothing,” she did get some time alone with Molly. As awkward as it was, it was a stroll down memory lane combined with drinks, food, and support. Molly kept Issa lifted and fed. She also kept it real and honestly asked where their friendship is going. That good therapy is doin’ it for you, Molly. The real questions hurt, but it’s better than acting like your sh*t don’t stank.

A car ride to the club with all the girls, including old girlfriend Shai, equals sing-alongs, liquor store stops, and a stick-up. Yes, a stick-up from Miss Legs Up Shai! YO! That’s the boldest isht ever. How are you gonna set them up and then fumble with your overacting ass? You and Brian are some bums. I guess if this trauma bond gets Issa and Molly on the road to rebuilding their friendship, we’ll thank you at some point in this Insecure season. The way these two looked at each other and died laughing when replaying the scene to Tiff and Kelly was gold.

Do you know what else was golden? That pancake house memorial for still living and breathing Kelly. Yeah, give your girls they flowers while they’re still here. I know your grandmama said it. That’s because it’s true. Not only that, be the you that you’ve always wanted to be and be you right now. Molly’s taking care of herself right now. Derrick and Tiff are together and building their cute little legacy right now. Kelly is contemplating the universe and how we journey through it right now. And Issa?

As the the opening episode of Insecure comes to a close, Issa is getting picked up by Lawrence at the airport. Hitting him with some lips and then hitting him with a dip on out. Yeah, she is clearly in the right now when she lets Lawrence know that she can’t do it. Do what? Them. Y’all remember that bombshell that Lawrence dropped about Conola Oil, I mean Condola, carrying his baby at the end of last season? So does Issa and she can’t handle that right now. Lawrence gets it. He’s clearly sad, but he swallows his pride and lets shorty go. We see you, Issa.

Honorable Mention: Friends, I was worried at the top of this opening episode of Insecure. #SeasonByeve teased us with that morbid ass question from Kelly about how you would spend the rest of your life and then sis ended up accidentally dead. The whole spirit in this house was like, nah… Nah! If we gotta say goodbye to the show by saying bye to Kelly, we might not be watching. For real, for real. So biggups to Lawrence getting the first goodbye of the season and not Kelly because my heart couldn’t take that!

Check out BNP’s other review of the show here.