If you nerd hard in the Hip Hop streets in addition to these comic book panels, then you witnessed Meek Mill come for Drake’s neck last week by saying he doesn’t write his own rhymes. Drake then released an alleged diss track targeting Meek Mill that best resembled a well produced home submission for Video Soul. Come on y’all, even Drake knew that shit was straight up Midnight Grooves, that’s why he had to release a second diss track four days later. Regardless of how you feel about the rap game now, rap beef and the battle are essential ingredients that help make the art interesting. I mean, people lost their mind when Kendrick dropped the equivalent of a census report on the track “Control” in 2013, so we already know that Hip Hop heads be starving for this shit.

In no other art form, besides maybe wrestling, is beef not only encouraged, but desired, especially between the highest profile titans. As I’m flipping through some Marvel trades, it dawned on me that while they were making hip hop covers, they should dig deeper and give us some real rap beef. If they need a jump start, I have some suggestions. Maaaaan, listen, Monica Da Gawd has had more aka’s than a Wu Tang album. Monica been called more shit than your average woman walking in New York that won’t indulge street harassers. So when Carol graduated from Ms. Marvel to Captain Marvel, a title formerly held by Monica herself, you know the Light Based Bae had some hard feelings about that.

Who struck first: Had to be Monica. You can’t blame Carol for taking a vacant title, but you can’t blame Monica when cats out here eatin’ and trading on her name.

This shit be like: Lil Kim and Nicki Minaj

New Guard acting like they run this shit, old guard wants to remind them who came first.

Game Enders: No real wax in this shit, but if Carol aka Princess Sparkle Fists was addressing the Avengers to rally them and then said some shit like, “Don’t ever give up on your dreams. […] one day you will look around and your dream will be gone and you will be mad at somebody. But be mad at your goddamn self,” then shot a smile at Monica while she rocking her old moniker, that shit might be lights out.
Magneto vs Cyclops 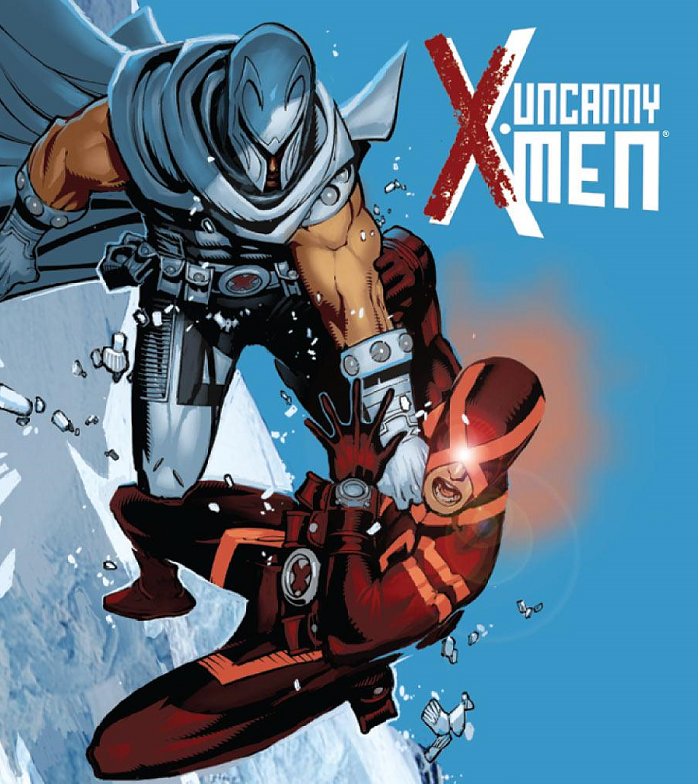 Let’s be clear about something: Magneto been wanting to magnetically deliver the fade to Scott Summers since before Scott opened his Optic blastin’ eyes as a newborn baby. Magneto been wanting wrap a metal box around Scott’s head while he powers up and call that shit a wrap for the longest.

And as Magneto has most often been an enemy to the X-Men, Scott been wanting to ignore his mentor Charles Xavier and give Magneto the optic side eye for dumb long. Plenty of heroes and villains hate each other. These muthafuckas ain’t even enemies really, they just hate each other’s guts.

Who struck first: If we’re talking pre-Xavier being a smoking crater via Scott Summer himself, then I’d have to say that Magneto probably hopped on the back of a Cable track and went ham for 2 minutes like Cassidy at the end of 6 minutes of death.

Magneto is the pure blood with the potential for great things. Summers is the one that rode some coattails into fame, but eventually just outlasted all his contemporaries and stood on top of the game for a while. Also, people love to discredit Summers like they do Jigga-man. Game Enders: Summers probably dropped some bars like: “Went from Magnus da gawd to Magneto’s Trash, controlled the earth when you started, now you just garbage. Went from a top villain to not mentioned that all, to Mystique’s assault on the school was more memorable than yours.”

Here’s the thing. Tony hates Steve’s methodology of thinking. Steve just fucking hates Tony Stark. These dudes started a literal Civil War. These are the Abraham Lincoln and General E. Lee of the comic book game, fam. It seems like these dudes wake up in the morning looking for an excuse to blow the other hero’s shit up.

Who struck first: You know Tony’s immature ass started that shit. Steve was probably just passive aggressive about his hate until Sam Wilson flew into the spot like, “Steve, have you heard this Hit Em Up shit from Tony? I think he talkin’ ’bout you, fam.”

This shit be like: This Biggie and Pac man, the heaviest of heavy weights. 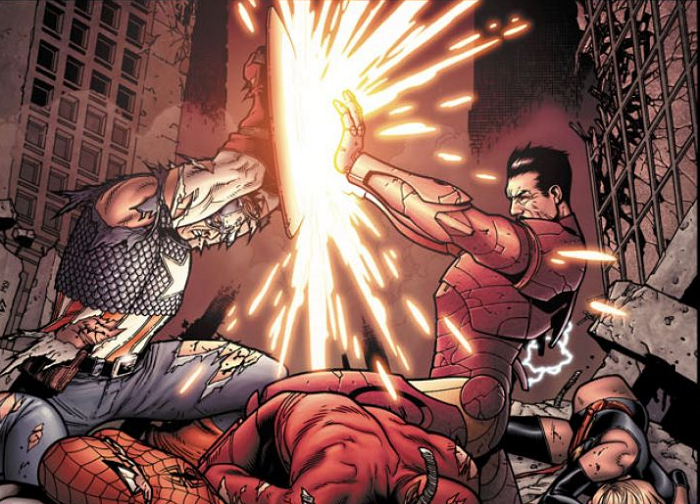 Game Enders: You know Tony wasn’t fucking around when his first lines were, “First off, fuck Romanoff and the clique you claim. Stark-Tech when we ride and we quick with aim.”

Steve’s moment of truth wasn’t even a verse, but the fact that after Stark was blindsided by a large circular object outside of a nightclub and hospitalized for it, Steve released his track “Who Shot Ya?” without naming Tony at all in the record. 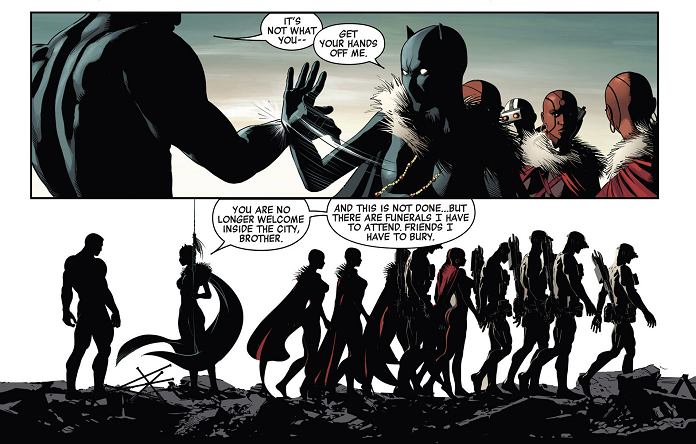 Shuri, I hate it had to be you. Truly. Want to know how beloved T’Challa is? Dude ain’t been THE Black Panther since Doom tried to arrange his murder like half a decade ago and the casual fan probably thinks Shuri a side dish that gets served on your steak if you happen to be dining out in Wakanda. Shuri is actually, Black Panther (though since we haven’t heard from her since before the world ended in during the Time Runs Out storyline…), and has actually always thought her brother was soft as hell when it came to non-Wakandans. Ok, I’ll just say it, when it came to White folks.

Who Struck First: This was Shuri, without question. She been tired of T’Challa’s shit.

This shit be like: Canibus vs LL Cool J

You know Shuri was doing some passive aggressive shit and probably slipped something into a verse like, “T’Challa, is that the Panther God in your spirit, let me borrow that.” And since T’Challa has zero sense of humor, he was probably like, “Fuck you say about the Panther God? Just cuz you blood doesn’t mean that you can’t get it.” Game Enders: Shuri tried to hit T’Challa with: Walking around showing off your body cuz it sells / plus to avoid the fact that you don’t got skills / mad at me cuz I kept that shit real in the field / while 99% of your fans wear high heels.”

But then T’Challa was like: “Shuri, 99% of your fans don’t exist.” After that, we all woke up from a daze and remembered that New Avengers came out that week.

You wanna talk about hate? You wanna talk about a fate worse than death? How about your worst enemy stealing your body and sealing you in his old and dying body, leaving you to die a painful death while you live on in a young and amazingly powered virile body? That’s some cold shit, fam. SpOck took over Peter Parker’s whole life, not just to get another shot at life, but to prove he was better at being Peter Parker than Peter Parker was. We talkin’ Sub-Zero hit you with the freeze blast cold, yo. But this shit started far, far earlier, when Doc was still whipping the mechanical arms and trying to ruin Peter’s day.

Who Struck First: Even though Otto was the bad guy before the body jacking, I got a feeling Peter spent a Friday night in the studio just to piss Otto the fuck off for no good reason.

Most of 50’s beef came out of jealousy or straight pettiness, so Otto tried to come at Peter’s humble living with Aunt May when he went for the whole Avengers crew (Peter included) on his diss track Piggy Bank. 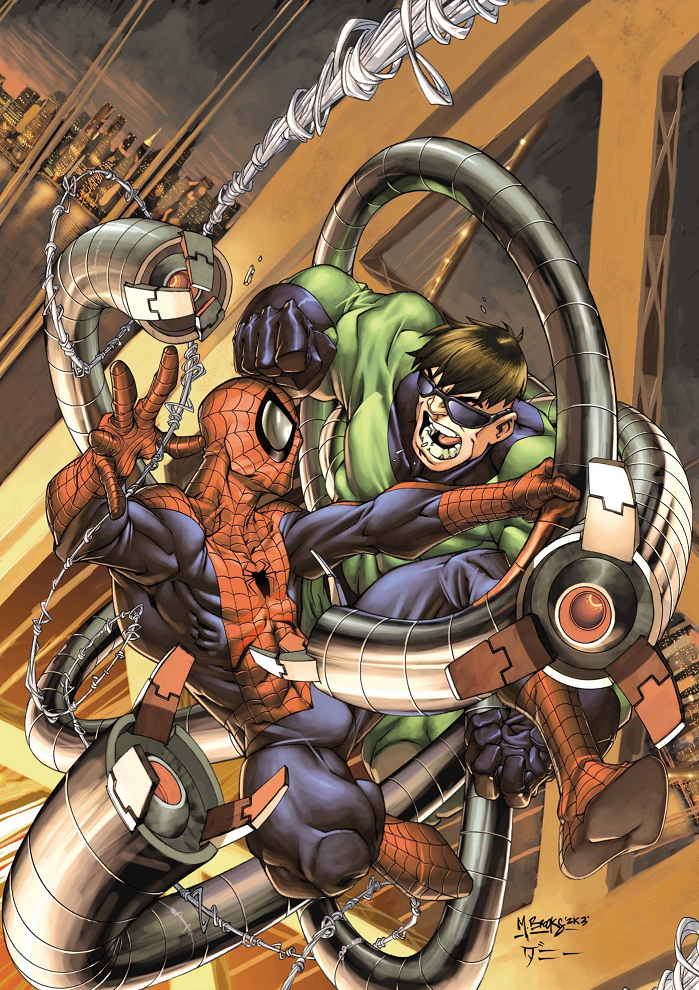 Game Enders: Peter play the happy go lucky cat cracking jokes, but you don’t want to see him when he got his venom up, fam. He went in on Otto on the Checkmate track: “We gonna handle this like grown men, you won’t win, you don’t even feel comfortable in your own skin” and “you should just sell tech and patents, out of the Sinister Six, your flows the wackest.”