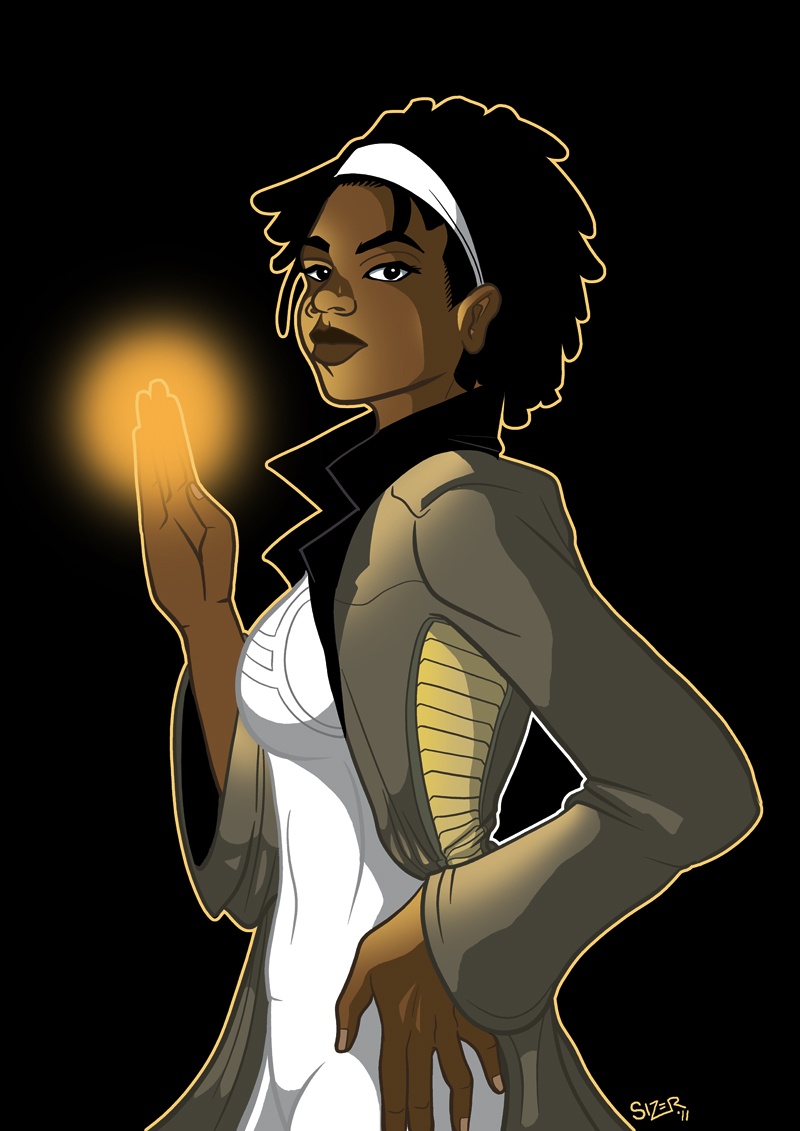 One of the most powerful people walking around the Marvel universe is Monica Rambeau, a dark-skinned woman of color that’s been in the game for years. Recently she has become more of a household name, with her leading the latest incarnation of Mighty Avengers. Those in the know, know she doesn’t take any shit.

Monica Rambeau is somewhere between the Rihanna and the Jean Grae of Marvel. She strokes no egos, calls you on your shit, and is written with the sharpest of wit/ sarcasm (and not in the sassy Black friend way, ever). She has been a leader of The Avengers, has one of the most powerful abilities around, and has been rocking her hair natural for years (more on that later). Monica is one of the best to ever do for women of color in comics when it comes to representation. So let’s get more acquainted with Monica Rambeau…

1) “What you gone do when I appear?
W-when I premier?… This shit been mine, mine”

Son, Monica Rambeau has tax deductibles on her fux. She gives none. One of the great things about her character is how unapologetic she is about her Blackness. This comes up in the Marvel Divas series, where we see her on her downtime with her predominately white friends. This is a testament to the way she has been written as, well, again, Monica isn’t depicted as the angry Black woman when giving her experiences. She is more so a woman of color showing the people around her experiences (as well as the reader) that they may be unaware of — a look behind the veil of what she is going through. That isn’t to say she always got the kid gloves on, ’cause Monica doesn’t keep it 100, she keeps it +1,000 especially when it comes to her home in New Orleans and helping out post-Katrina. “Well, I spent a lot of time there post-K. Cleaning up the mess you white people made.” Monica is that friend in the group that tells you like it is. Monica don’t do meek, subtle, or quaint. Don’t even get her started on that male privilege… 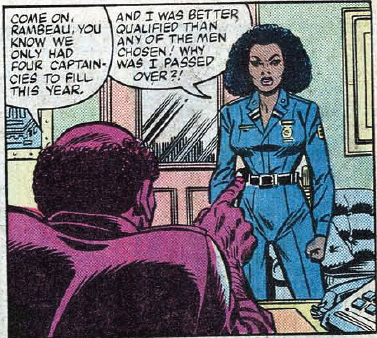 2) “Beware, cuz I crush anything I land on.
Me here, ain’t no mistake it was planned on”

Listen, Monica is able to tap into the electromagnetic spectrum and become different forms of energy from electricity to gamma rays, cosmic rays to ultraviolet light. Monica must be an anime fan, because when she gets pissed she’ll shout out certain moves. The woman has her own version of Goku’s spirit bomb attack.

As we’ve seen in Mighty Avengers, when it comes to Monica and her powers the question isn’t what else can she do, it’s what can’t she do. She can bend light to make herself look like someone else. Once, the team faced an opponent that could slow down time. Monica, who can be made of light, was able to wreck house because even slowed down the speed of light is still too dope game to handle. The woman is a fucking powerhouse. The best part is that she can assist like John Stockton. We’ve seen Monica become energy for Captain Marvel (Carol Danvers) to absorb and disperse at enemies. We then saw her step it the fuck up another notch when she transformed into gamma energy to give She-Hulk a boost. Sun, Wolverine and Colossus’ fastball special ain’t got shit on Monica’s. 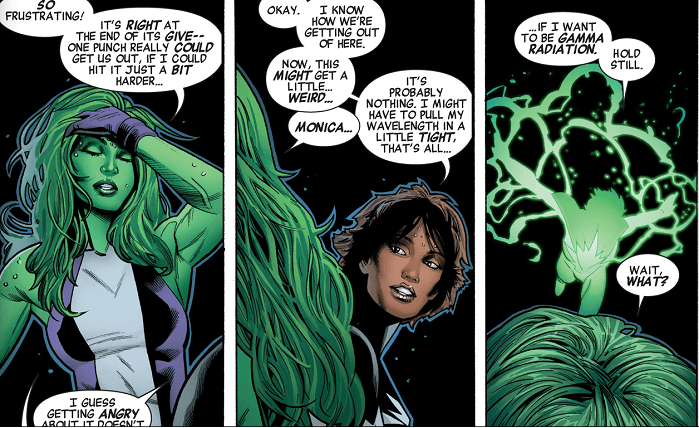 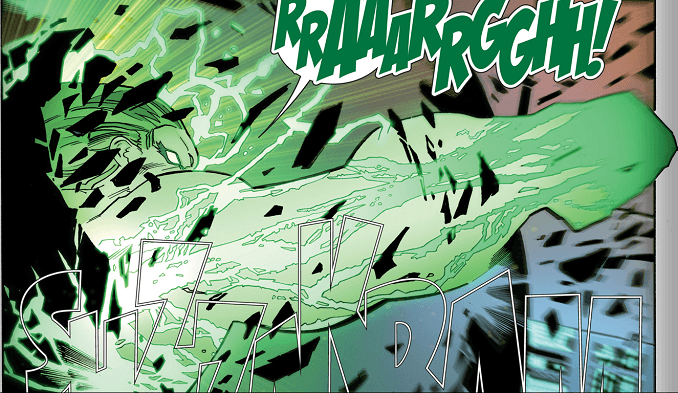 3) “Hairdresser from Milan, that’s the monster do”

Ever since her debut, Monica’s hair has been all-natural everything. We’ve seen it go from an afro, to braids, to locs, and so on, and so on. This was a great thing for me to see going through back issues. It is just a reminder that this part of a Black woman’s life has been put on fleek in Marvel for years. It’s been great seeing different artist tackle this as well, each giving a different interpretation and style on the way she was rocking her hair for the time being.

Recently in Mighty Avengers, we’ve seen Monica rocking her hair with a relaxer. This is the first time this has been seen from her characters and my initial reaction was totally, “What part of the all-natural everything is this?” I then checked myself, ’cause I’m a dude and a woman’s right to change her look is her own, fictional or non-fictional, nah mean? As a fan, as tough as it was to see, this was about Monica going through a total change. There are also women that do rock that relaxer in the hair as its easier to manage or just something they like. Doesn’t mean they aren’t about their natural hair or hate it. It’s style… This was addressed in  Mighty Avengers as well tho. 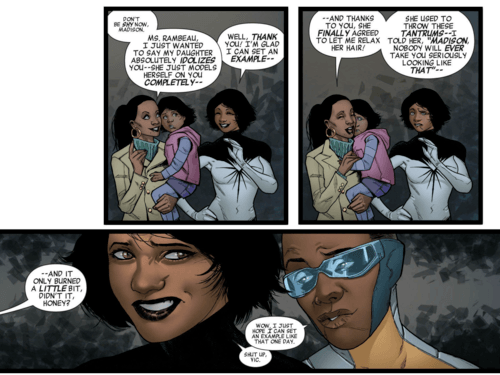 When it comes to her love life, Monica is straight up No Flex Zone. We saw her and Jericho Drumm aka Brother Voodoo (sorcerer supreme) start up a relationship back in Marvel Divas. We saw them enjoy a night together and when Jericho invited her to stay over…Monica recounted the story saying, “Yo, I flew. That shit freaked me out.” It’s hilarious to see Monica, who is so straightforward, be soooo put off by unexpected emotion. She still keeps it one hunna tho, as it isn’t a commitment complex, but as she puts it,

“I know what I want. And what I want is to move at my pace and not some man’s pace.”

Come on man, Monica makes the rules dude. Seeing her in a relationship with Drumm is hilarious because they are both from The Big Easy, and they are both Black. Since Storm and Panther have split, this is the only Black couple I can think of at Marvel. Which kinda says a lot considering how long they’ve been in the game. The interaction between Monica and Jericho is refreshing to see as a closet peek at a Black Rom-Com in a Marvel book.

One of the best things about Monica is how down to Earth she is. She is always written as the friend you want to hang out with, someone you want to have bail you out and let you know you’re fucking up. Monica is written this way when she’s with her inner circle of friends as well as when it comes to herself. We’ve seen her alternate between momma bear and partner in crime but to me… Yo, Monica is the witty one in whatever crew she’s in. We done seen her throw shade with the best of ’em. Monica’s humor is a big part of what makes her enjoyable as a character, especially when we see that put up against other people in whatever title she is in at the time. As much as she hangs on the sarcastic side, it’s a big joy to see her just being outlandish in jest with her peoples when their lives aren’t on the line.

When it comes to powerful women of color in Marvel, nah, fuck that, comics in general, y’all goin’ start giving my girl Monica Rambeau the respect she deserves. Storm is dope but she ain’t the only one on the Parthenon for Black girls killing it in the panel game. Monica is either straight up in your face, making fun of your kicks or saving your life. I think of the V. Bozeman lyrics when Monica comes to mind due to how un-apologetically Black she has been presented in terms of issues she faces in her personal life as well as her hero life. That’s another big main reason I fucks with Monica. I can’t name another character that throws it all out there in her own terms where the reader ain’t got a choice but to acknowledge what she’s talking about. Monica doesn’t keep it 100, she keeps it +1,000. Every time she hints at it in jest or lays it out occupying whiteness in panels, whenever Monica steps into that limelight it’s like she’s coming out singing:

“Black when you stare. Black if you smile.
I was Black back when it wasn’t even in style.”