And you say Clipp Ci–

Naw, actually, we ain’t sayin’ shit till we make sure that Sunny ok fam. Your boy done put the paws and genjutsu on Sunny something fierce where this dude woke up in a less terrible version of the world and 10 years in the future. Sunny chillin’ in some victorian home, no tats, Veil Da Fictional Bae lookin’ like life goals and Henny Rock lookin’ like he just got cut from his first little league team. This is livin’ right here fam. But some creepy kid from the Haunting with Veronica’s Veil keeps showing up so Sunny know something ain’t right about this shit.

….yeah, in reality, Sunny still knocked the fuck out, fam. MK nursing Sunny and they can’t figure out what the hell to do with him. They pull back the blanket and see he got Johnny Storm’s palm scanner on his chest. Bajie says its the Hand of the Five poisons, basically the same shit Beatrice Kiddo hit Bill with, except Sunny didn’t get to have the decency to fix his garments and walk a few steps before collapsing the fuck out. Bajie is like, yeah, game over man, this shit is a wrap. He ain’t gonna see that new moon, fam.

Back in the “if a coma is wrong, I don’t want to be right” dream, Sunny is a farmer and trying to teach Henny Rock how to till this here land. But Henny wants to be a fighter and you know that shit made the non-existent tats on Sunny’s back itch. They race to the pens and find all the pigs got them Jesus Pieces tatted across the belly. Fam. What kind of ritual shit is this? Sunny tells Henny to go back to the house and that it must have been wolves that got to them. Bruh. Ain’t no wolves out here using protractors and straight edges to carve perfected lines on these muthafuckin’ pigs, yo.

Maaaan, listen. Sunny distracted chopping wood and meanwhile, Veil out here lookin’ like the finest pilgrim this side of the Canterbury Tales. She says that maybe they should move after somebody Jesus tagged their pigs, but Sunny like, nah…sure it was nothing…Sunny goes to get Henny from his room, but he got a huge slash on his hand from playing with Silver Moon’s sword bae. Henny said he got that shit from Artemis in the woods. Sunny like, look, I know you makin’ that shit up and they ain’t even dropped Young Justice in our region yet.

Bajie and MK sharing Monastery war stories and we get the scoop on why Bajie dipped from the Akatsuki in the first place. Basically he saw the origin of the Phoenix Force Jean Grey and he didn’t want no parts of that shit.

Jade taking a bath in the most pristine white tub ever created. She keep calling for Maryann to come freshen the water, but yo, MARYANNE AIN’T HERE FOR YOU HEIFER. Apparently Omar The Widow is coming and runnin’ everybody’s shit. She taking cogs into her ranks, either killing or recruiting clippers. Sheeeeeiiiit. Oh Jade caught up with Marianne. Marianne ran the jewels and then hit Jade with the 1/2 combo across the face and torso.

Back on Earth 2, Sunny still living that simple life, but dude can’t sleep cuz he keep getting zombie choked out in his sleep. He gets up to see Henny, but someone done marked Henny on some “you belong to me now” type shit. Sunny goes to the kitchen to get some towels and Artemis layin’ in wait for dude. We still don’t know who the fuck she is, but she got your boy Sunny hyperventilating in the real world, until MK slaps a Bane mask on dude.

The last remaining (and loyal) clippas trying to lead Jade out the house, but this shit is whole sale slaughter fam. Widow’s clippas out here EATING GOOD, GETTING MIGHTY HEALTHY OUTCHEA. Jade tries to run with one of her clippas get domed, but nah, that’s Widow what you know good stand on the stair case. She try to swing the sword at widow and that fight last about .4 seconds before she got disarmed. Jade is like, yo, I thought you didn’t kill women. She like, nah, I just roll with muthafuckas that might [enter Quinn Stage Right].

MK and Bajie get to the Northern Air Temple and Bajie gets cold feet. Again. Like…again. Fam. Shit or get off the post apocalyptic pot, man. Again, MK gotta convince him that Sunny is worth saving and that he can’t do it alone.

Quinn and Jade talkin’ on some last moments on earth type shit. Quinn is like, yo, I earned my shit, you fucked your way to the Baron quarters. Jade is like, fuck it, I know my life is basically over, let me go ahead and get these bars off. She talkin’ about how her and Ryder actually loved each other on a level that Quinn can’t understand and that shit getting under Quinn’s skin like a rash. But, because he’s Quinn, he can’t kill her, so lets her go, talkin’ about releasing her back into the wild like a fuckin’ snow fox.

Ok, wait. How the fuck Bajie and MK “sneaking” around the Monastery? These super honed killing machines with Wolverine senses don’t know anybody is here? The Master, the Master my acolyte? She can’t feel a shift in the force? They grab the necessary shit and try to make it out, but Master is like, nah, you can’t be coming up in my crib, tracking mud on the wood floors and not at least say hello, fam.

Master is fed up yo and talking about how much of a disappointment Bajie is. The Abbots start going in on Bajie and MK but Bajie is like, yo, cut the weak ones, they ain’t controlled their shit yet and will attack each other. They create a big enough distraction where they attacking the Master too, giving just enough time for MK and Bajie to get away. 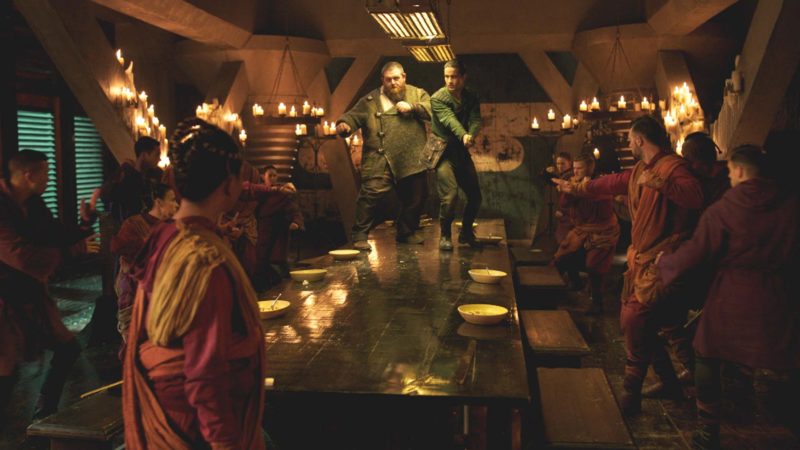 On Earth 2, Sunny comes home and Pilgrim Bae got her bags PACKED. Like, yo, you crazy, crazy shit be following you and I’m taking Henny up out of there yo. Artemis draws Sunny away from the house, but then Veil is screaming and I’m immediately like, oh, somebody gotta die if they done touched Veil…and they touched her up man. Veil dead as fuck. We didn’t even get any dying words. Just dead on arrival. Sunny don’t even get time to process that shit, cuz the some ghost bloody footprints lead him out to the pen, where Henny chillin’ in the hay, lookin’ like preteen Carrie and shit. He like, yeah, you know I did this shit, I got your genes in me (and her blood on me). You knew what this was. 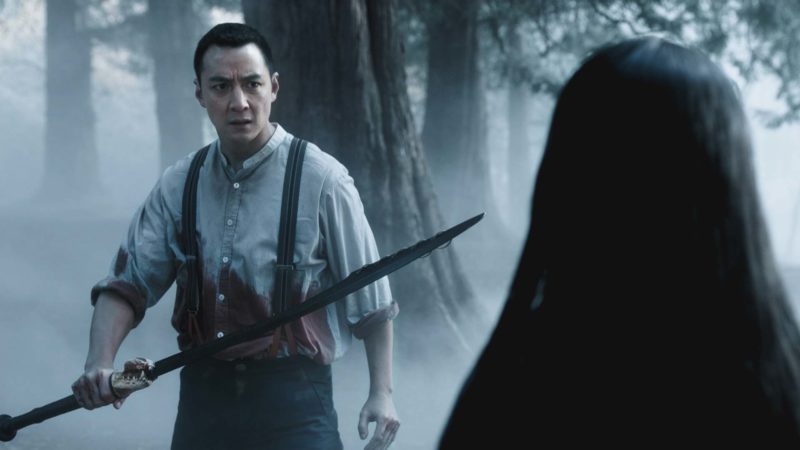 Sunny chase Artemis out to the forest. Man….HE SHOULD HAVE NEVER DONE THAT SHIT. Sunny in the woods fighting all the hashmarks he ever put on his back. Bruh, like all 600 of them. He getting buried in his misdeeds like Jon Snow at the battle of the Bastards Superbowl special while MK and Bajie performing that acupuncture on your boy. They bring him back to life and Sunny gotta be like…Not sure…if this is better…or worse than where I was just at. Ain’t there a plane of existence half between those joints?

Bajie chillin’ by the creek and MK tells him that Sunny is doing better. Bajie tells him that he saved Flea too and that Badlands is the only place he hasn’t looked for her.

…And, of course he’s the one that took the compass, MK was looking for. Even when Bajie being honorable for half a second, he still fuckin’ Bajie yo. No honor among former Abbots, fam.