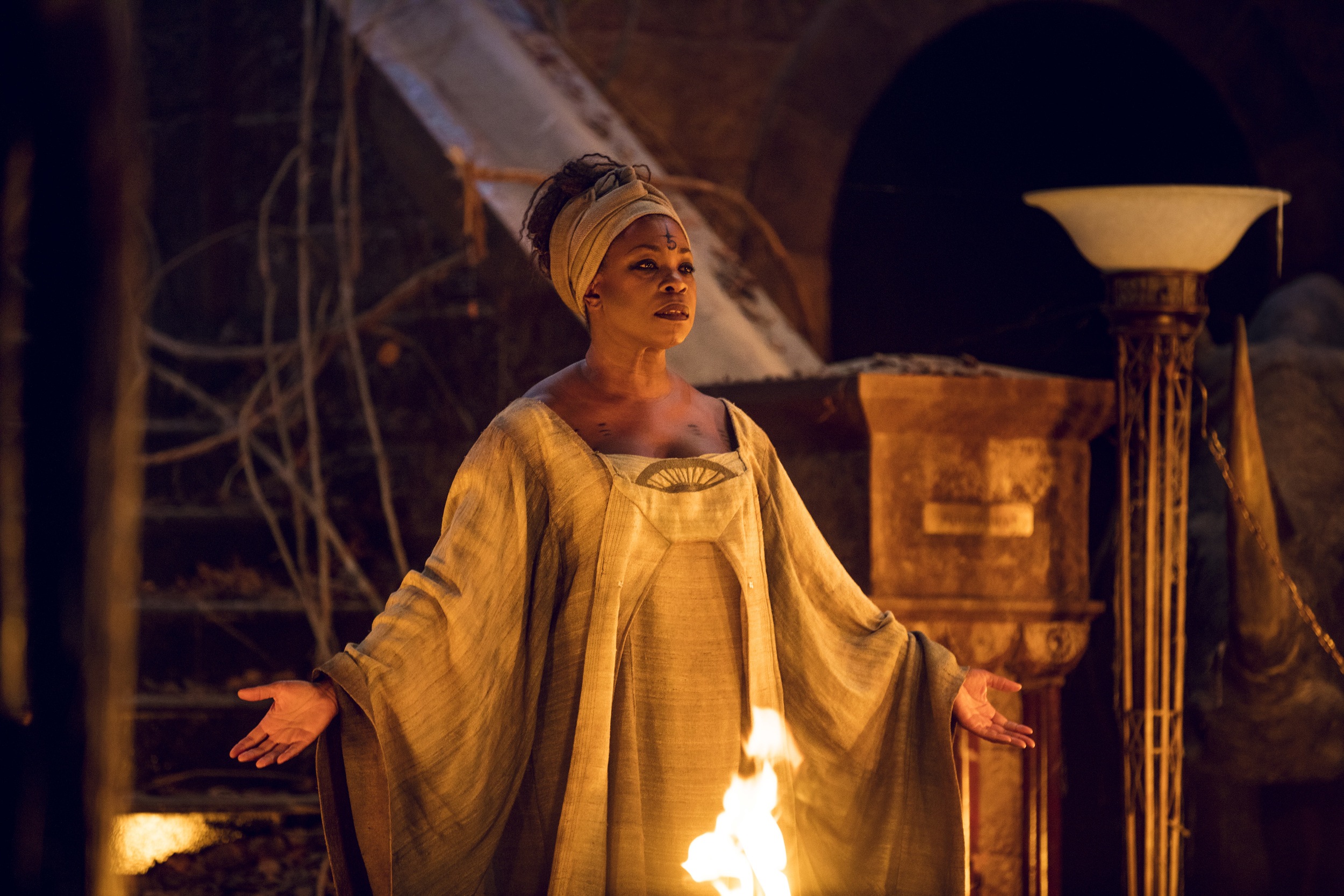 Pilgrim and his high priestess, Cressida lead the Acolytes north, using the Azra compass. We see Sidekick 1, Nix, and Sidekick 2, Castor, and the boy is tuckered out from going all black eyed and killing Baron Chau’s clippers. Pilgrim sympathizes and let’s him know that Castor’s Gift is for the greater good, even if it seems to be killing him. Outside, Cressida looks over a great lake with an island and structure right smack dab in the middle of the water. The compass has led them to Azra’s first temple, and apparently Pilgrim is planning on building his kingdom in the Badlands. That’s bound to go over well with the Widow and Chau.

Per his new job description, Nathaniel Moon gets some new, blue threads and the Widow hooks him up with a Butterfly-themed metal hand, cutlery included. MK is out of his room and out of opium and wanders in to complain about it to the Widow. She introduces him to Nathaniel and asks that he train MK, who has been slacking on the fighting due to being high all the time. Nate Dog takes it easy on MK until he starts running his mouth about Sunny being the best clipper in the Badlands. Nathaniel proceeds to knock MK the fuck out, reiterating his hatred of Sunny and his skill as a one-handed Regent.

At the Refugee camp, Bajie, Lydia, and Sunny try to figure out how baby Hank came to have the Gift, which Bajie says is passed through the blood. Lydia remembers that when she and Waldo found Sunny as a child, he was wearing the mark of Azra around his neck. She also lets them know that her father used to track Dark Ones for the Abbots and suggests they hit up an exiled Master called the Mad Witch. I’m with Bajie here–it doesn’t sound like the best idea. First, she’s mad. Second, she’s a witch. Still, Sunny believes she can help baby Hank and asks Bajie to come with him to find her. Bajie, who is well known for looking out for only himself yet also being weak for Sunny, admits the Mad Witch, Ankara, trained him at the Monastery before she lost her mind and got kicked out. She told Bajie about Azra, but apparently obsessed over it so much, she went crazy. According to Ankara, Bajie is the Chosen One, which Sunny rudely laughs at. Excuse you, Super Soft Sunny, but Bajie is a precious cinnamon roll, and he can be whatever he puts his mind to.

On the road, Pilgrim and Cressida head onto the lake to set up shop at the first temple of Azra, which looks like an abandoned Museum of Natural History, complete with dinosaur bones and vases behind glass. There are unbelievers in Pilgrim’s flock and by the heavy look Castor and Nix share at this revelation, there might be issues there later on. Pilgrim calls out the most vocal doubters, telling them it is his fault they doubt. He covers his eyes, claiming he only has blind faith to protect him and challenges the unbelievers to strike him down. Pilgrim has mad skills and takes care of all but one, who seems to find his faith in the face of Pilgrim’s blade.

In the meantime, Nathaniel arrives at the refugee camp looking for the Iron Rabbit and Bajie. Tilda shows herself, and Nathaniel seems suspicious of the fact that she looks a lot like the wanted poster of the Iron Rabbit, smudged eyeliner and all. Lydia distracts him with an offer to visit the Widow and heads off, leaving baby Hank with Tilda. At the Sanctuary, MK is going through opium withdrawals, and the Widow lets him know that Nathaniel is tracking Bajie. She wants Bajie to restore MK’s Gift, which MK isn’t too keen on.

Over at the Azra Museum of Natural History, Pilgrim too, questions the purpose of their trek North, and Cressida reassures him that the Catalyst has sent them a signal that led them to hallowed ground. Wait. Signal? Catalyst? Could she mean my sweet boy, Bajie and that low-tech message he sent out at the end of last season? Cressida also takes this time to remind Pilgrim that she found him left as a sacrifice by the Elders and her faith doesn’t allow stupid questions. Pilgrim admits to being worried about Castor, to which Cressida tells Pilgrim he’s too attached and Black Eyes don’t have a long shelf-life. They decide to raise spirits and do a full moon sacrament, which doesn’t sound menacing at all.

Once again at the Sanctuary, MK has talked one of the Butterflies into bringing him drugs. In a scene I would have preferred not to see, MK shoots up heroine into an arm vein and promptly overdoses, Pulp Fiction style. He flashes back to his dark black-eyed mirror self in a cornfield somewhere. Mirror self tells MK that he didn’t kill their mother but that she was murdered. As he lays passed out in his cage at the Sanctuary possibly dying, MK remembers that it was actually Sunny who killed his mother. Just like that, MK has his gift back.

Out in the gardens, Lydia and Nathaniel head out to find the Widow and there’s a vibe, fam. Did they used to…?? I don’t know what happened between them, but there’s definitely some history there. The Widow and Lydia chat, and Minerva doesn’t threaten Lydia. Instead, she appeals to Lydia’s well known love of power and offers her a Viceroy position, the Fort, and Quinn’s old poppy fields. In return, Lydia must give up the Iron Rabbit, a pretty sweet deal that I don’t see Lydia turning down any time soon.

With a full moon high over the Azra Museum, Pilgrim and the High Priestess Cressida perform the sacrament, which involves kissing, visions, blood, and hooks in Cressida’s back, placed there by Pilgrim. These Azra folks are not messing around.