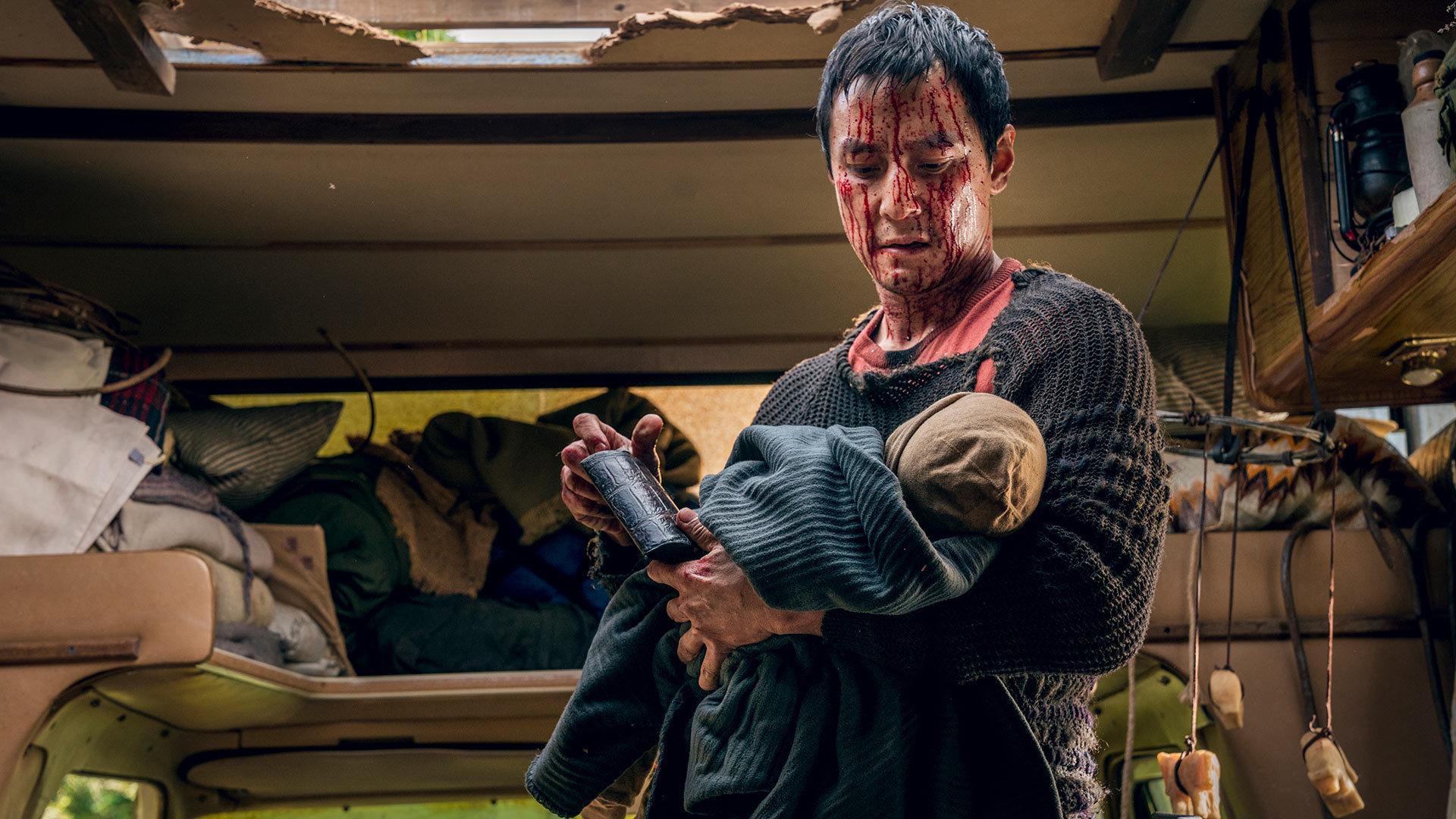 Into The Badlands Recap: Enter the Phoenix

Season 3 starts exactly like Season 2 ended, the Widow is plotting against the only other living Baron, Mistress Chau, while the Civil War is taking place in the Badlands. We immediately get a pretty gruesome fight scene, which is honestly one of the top three reasons why this show is amazing. Who doesn’t like excessive blood squirting everywhere? The badass Clippers in blue open things up with a fearsome slaughter of the Clippers in white, only to be cut down by arrows from above in a most un-honorable fashion. In the meantime, we come to what looks like the same tower Bajie sent out his tech-savvy message to Azra. The Widow rides up on a dark horse wearing a hoodie and finds Nathaniel, the brother who got his hand chopped off by Sunny last season when all he wanted was his 1000th kill. The Widow wants Nathaniel to join her crew, but he’s not about that life anymore. He only wants the dude who chopped off his hand AKA Sunny. We already know that is never going to happen, friend, but a man can dream. Nathaniel tells the Widow he has no honor left and she offers to fight him because apparently that’s how one performs a job interview in the Badlands. When they’ve each got a knife pointed at the other’s pressure point, Minerva lets Nate Dog know he’s got the job he never really wanted, so he asks about vacation days and health benefits and they’re off to the Sanctuary.

Cut to a random road and a convoy of the Widow’s trucks being attacked by an unknown Clipper-like squadron in multi-colors, who turn out to be thieves led by…Surprise! Tilda and her not-girlfriend are alive and stealing goods from Mother and happen upon a truck full of…Surprise! Bajie is also alive and in chains after being captured by the Widow’s minions. “We’ve got to stop meeting like this,” Bajie drawls, and I can’t help it, I love me some Nick Frost in this show, let me tell you. The group of ex-Butterflies takes Bajie to a refugee camp down the road that is run by…Surprise! Ex-Baroness Lydia is alive and running a refugee camp for Cogs and others attempting to escape the Widow’s war. Bajie warns Tilda to keep a weathered eye on the sneaky Ex-Baroness turned reformed Totemist and promptly heads off to check out the motorcycle he rode off on at the end of Season 2, which happens to be parked right in the same scene frame.

Back at the Widow’s Sanctuary, MK is locked in one of her gilded cages smoking opium with his little man bun and two girls in his bed. The girls get kicked out and the Widow reminds MK that Sunny abandoned him and she is all he has. He’s understandably upset that Minerva hasn’t helped him. However, he’s so stoned, he can’t really do shit about it, but blow smoke in her face. MK isn’t very happy about the reality check, but when he tries to leave, the Widow drop-kicks him right onto the plush carpet and locks him back in his room to think about what he’s done.

Somewhere far away from the Widow, Sunny wanders through the forest acting super soft and incredibly sad. He sees a doe and her fawn, but doesn’t shoot, he washes clothes in the river shirtless, and reads Rudyard Kipling to baby Henry in their double wide, lamenting the death of Veil. Like I said, S U P E R S O F T and very sad. After he drinks himself to sleep, Sunny wakes up to a feverish Henry and four Stalkers attacking his trailer home. Obviously, Sunny kills the shit out of them and then heads to the local house full of randoms to ask for help for Henry. Unfortunately, the nice lady there can’t help and when Sunny is alone with her old man, he’s told not to come back because he’s trouble. Somehow, Sunny knows that homeboy set him up and tells the guy that he’d be in pieces if it weren’t for the fact that Sunny is now Super Soft and doesn’t want to murder a dad in front of his son. Instead, he heads to a nearby refugee camp that couldn’t possibly be the same…oh, wait, yep. It’s the same camp. So maybe Sunny hasn’t been as far away as everyone initially thought.

At the camp, he finds a healer to look after Henry then heads out to explore because even though his face is plastered on a wanted poster, it seems like a good idea to walk around in a crowd of strangers showing his face and whatnot. Sunny runs into his old buddy, Bajie, who has been in camp for less than a day and is already swindling refugees. They make quick work of the three dudes who have no idea who they’re messing with. Sunny gets his Azra-themed compass back from Bajie with little to no fan fair and the pair sit down to drink and catch up. Sunny tells Bajie about Veil and Henry, but before they can get all up in their feelings, the healer arrives with Henry. She tried to take his blood to figure out the source of his fever and poor little Hank went all black eyed on her. According to Bajie, the Gift has never manifested in someone so young and all of a sudden, Sunny wants to find Azra again, for answers, he says.

Over at Baron Chau’s border wall, a convoy of colorful folk are traipsing up, led by a mysterious man and his two mean looking sidekicks. The three of them let Chau’s Clippers know they’re there to save them, but those dumb Clippers in white who ain’t about shit do not want to pick up what homeboy is laying down. They attack, but Sidekick 1 and Sidekick 2 cut themselves, turn all black eyed and the next thing we know, this Messiah fellow is telling the one Clipper in white left alive to go spread the gospel that these new badasses are in town, all while holding his very own Azra-themed compass.

This is a lot.