The Fresh Prince reunion is the happiest tearjerker you’ll ever watch. If the vibe feels like an in memoriam it’s because years of memories and real-life relationships are remembered through laughter and tears. Fresh Prince is of course not dead and gone, the full series can be viewed on HBOMax as we speak, but there is something in the air of this reunion that feels like loss. And as you watch you feel like you are part of the family right along with them. Some things need to be put out on the table, and you can feel it right along with the hilarity of the shenanigans that is Fresh Prince.

In West Philadelphia Born and Raised

The reunion begins with an individual interview with Will Smith as he talks about the magic of the show. We are slowly re-introduced to the set we remember from our childhoods. The living room, the spiral staircase, the walk to the kitchen. Our favorite characters start coming from the woodwork… literally. Karyn Parsons (Hilary Banks) comes front and center wearing an emerald satin gown looking like Diahann Carroll’s Dominique Deveraux in Dynasty.

Alfonso Ribeiro (Carlton Banks) pops his head out from the stairs as everyone rejoices and Joseph Marcell (Geoffrey) as poised as ever looking overjoyed to be in that space again. The cast sits on the famous couch to talk about their pathways to Bel-Air. Tatiana Ali (Ashley Banks) talks about her audition being nerve wracking, and Karyn echoes the same. Watching Alfonso be hoite toite in an late 80s, early 90s tracksuit in an audition tape is something to revere.

You hear an unbelievable story of Will being invited to a party at Quincy Jones’ house. Him being asked to audition in front of a room of investors who will decide the fate of the show, that night signing off on whether the show would be greenlit or not. Will Smith, a rapper from Philly with no acting experience, composed himself in 10 minutes off of the strong will of Quincy Jones. Whatever that resolve is, can it be bottled and sent my way?!

The relationships that you thought were super tight are confirmed in this look back at these 6 years of Fresh Prince. Alfonso and Will were instant brothers fooling around at rehearsals and running around set like little boys.

James Avery (Uncle Phil) is as much the stern fiercely loving father that you see on set, while off. Will exclaims how much he wanted to impress him and wanted James to be proud of him. Tatiana who started the show at the age of 11 said James would take her to SCHOOL. Not in the black – you need to learn some couth way. But in the way that life lessons she will never forget were given right in the Banks household living room. As an actor you can attest to the unforgettable and transcendent experience that comes with the process of a production. From theater to TV, the bonds that are made are once in a lifetime and stronger lessons than you could ever have learned in school.

You’re Movin’ with Your Auntie and Uncle in Bel-Air

This feeling of the loss of James Avery was unanimous with the cast from DJ Jazzy Jeff (Jazz) to Daphne Reid (Aunt Viv ‘93-’96). Then the tears really began. Will spoke about the presence that James Avery had, not his physical – which they did joke about often on the show (one of the things that doesn’t age well, the 90s fat shaming…) But Avery’s stature of talent and breadth of experience filled a room in the best ways. He had so many things to teach in his wake. The show then takes you on the real in memoriam from the funniest Uncle Phil moments, to the put a boy in his place shut it down, keeping it elegantly really real moments. And the softer moments of family and love. I’m over here fighting tears because you feel the missing piece of this reunion is so apparent. The one you cannot control, the one we all have to remember that James Avery isn’t going to peak his head through those fictitious doors to the Banks home. Tatiana’s just a faucet at this point and once you see grown ass Ashley Banks tears streaming, I challenge you to hold back yours – no contest, your blubbering in your living room hands down.

The absence of Uncle Phil is not the only thing missing from this gathering. Where’s Nicky!? In the mid years of the show Aunt Vivian unexpectedly gets pregnant (cuz black don’t crack we forever young) and gives birth to the youngest of the bunch. The cute, sharp witted and hilarious Ross Bagley (Nicky Banks). Ross comes in just before the end and shocks the cast. He’s all grow’d up! Ok but for real for real, the elephant in the room what about OG Aunt Viv!?

I’d Like to Take a Minute, Just Sit Right There

This is a lesson in the experience vs. perception of Black women. We all knew something went down between the cast of Fresh Prince and Janet Hubert (Aunt Viv ‘90 – ‘93), but it was hard to understand. There was a lot of anger, animosity and for the viewers confusion. One day Aunt Viv was a shorter light skinned woman and not much was said in explanation. Of course, the truth was deep in there somewhere – but colorism was thrown out there, and the accusation that Hubert was difficult to work with. That she was having the worst time on set, and the rest of the cast couldn’t get along with her. This was the narrative audiences and lovers of the show surmised from the media around the issue. As a Black woman you also felt hurt, why was the narrative that she was ‘difficult.’ Even as a kid this seemed a bit off. Maybe it’s because I’m growing up as a Black girl and my intuition is sensitive to this experience. But I always felt for OG Aunt Viv, deeper than the idea that she couldn’t get along with the rest of the cast.

Now-a-days, we are more vocal about this issue and what I was really tapping into in my gut feelings as a child. How many times are Black women going to be labeled as ‘difficult,’ or be required to be poised and agreeable at all times no matter what we may be going through. Black women in the U.S have been labeled the caretakers of all, and when I say all, I mean everything. To portray the strong, educated, daring mother that Aunt Vivian’s character is takes a lot on ones’ shoulders. The history of Black women caring for all children, nursing babies, and at the same time being exotified and an object for desire, while expected to be a workhorse in turn. Each and every Black woman holds this history in their bones, in their blood, and the rest of the world projects this onto Black women at all times as well.

To watch Janet Hubert’s eyes glisten as she looked at Will with somewhat contempt, but inherent care told a very public inner conflict with just a glance. We find out, with not too much detail that Janet had been going through an abusive marriage, being pregnant, and trying to do what is expected of Black women – to hold it all together and be excellent without wavering. A physical impossibility that Black women have been magically doing for lifetimes.

She was offered a new contract with the show stating she could not work for any other projects and was essentially being paid no different. Her forms of income were being forced into a silo. Thinking of her situation she could not accept. This is someone who held the show, represented for dark skin women, and took this moment to recognize her worth and the care she needed for her situation. They then decided to recast. She was shunned after that, and who wouldn’t feel anger and animosity towards the family who cut you out.

Without all the specifics, I was for one shocked that Will was at the crux of this. He was part of the labeling of ‘difficult’ a sentence for an actor that can be career ending. To see Will’s face in remorse, it was almost like he reverted back to his child self – but with the knowledge of his adult years. He had no words to truly describe the world of knowing he now had, and the realization of his past mistakes. He began to say, now as a father and having been through a divorce back then he could not have fathomed what was going on for Janet. They both semi acknowledge Will’s talent but also big headedness towards it all back then. He felt at 21 hurt and responded in sue. But you see in his body language his tight lip and forlorn gaze he knows he F-d up. And Janet is given him all the space he needs to sit in it. She has forgiving energy but oh – she is not giving it up that easy.

She reiterates her feeling of being betrayed as she should. Reclaiming time, girl you can have it all! It’s hard as a Black woman not to take a side, I cannot say I’ve had the exact experience that Janet Hubert had, or that I would even respond in the way that she had. But I cannot ignore my ancestral instincts and want to clap, snap, and cheers OG Aunt Viv.

In this day, we are not in an era of forgetting or even easily forgiving, but this pandemic and the fight for our lives in more ways than one has shown us all what we need from this life. Time is short and this conversation was just the beginning of healing for this journey, and it felt fortifying to see.

Janet Hubert then joins the rest of the cast on the couch for a brief introduction. Now, I don’t want to take away from the immense contribution Daphne Reid gave to the role of Aunt Viv in those last years. Jokes were made with Jazz saying “there’s something different about you” in episodes where she first appeared. As the viewer, you were able to accept this new Aunt Viv over the years. She had a different energy that fed into the family in a unique way and earned her place as new Aunt Viv. For the actors, it was the first time Janet and Daphne had ever met each other. I was expecting it to be like Timecop, and if they touched, they would meld into a puddle on the floor. But it was sweet, and also jarring at the same time. Seeing them in the same room, I was like whew! That’s a sit down I would want to watch.

As the special came to a close, we got a glimpse into the party that was the recording days for the cast and the energy they gave to the live audience. An energy that the audience happily gave back sometimes with uncontrollable laughter. The show set a precedent for nuanced Blackness, for a new look at what a Black family can be. Not without the family drama of course, but also with humor, style, and ambition. A show that will never be forgotten and an inspiration for television and Black television today. 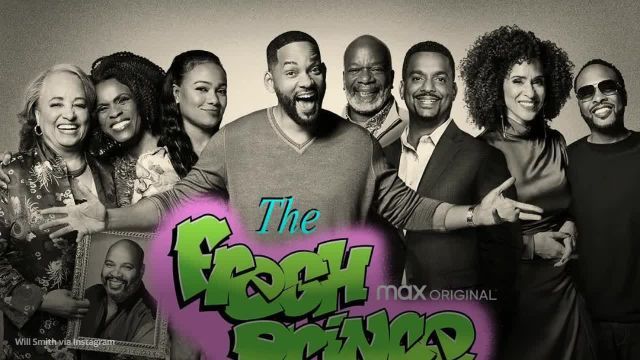