You know how sometimes your favorite Marvel comic book (cuz lets face it, Marvel does this shit more than anyone) got the like all 17 Avengers teams fighting each other in the middle of Utopia on their cover and you’re like GOTDAMN I CAN’T BELIEVE T’CHALLA IS BEHEADING THE HULK LIKE THAT ON THE COVER, SHIT MUST BE CRAZY ON THE INSIDE, and then you crack that issue open and not only are the Hulk and Black Panther not in the book, but its actually just a “will they won’t they” hook up story between Cable and future Pepper Potts? Well, this ain’t that shit because when the title says Korra Alone it means Korra is by her muthafuckin lonesome, b. The first episode just teased out them bangs on the Korra storyline, this joint is the full afro pick my people.

Chapter II starts immediately after the end of Chapter I, you know, that part where Korra got that brakes beat off of her by some no name making minimum wage bending rocks in the quarry. We get clued into to why Korra might be having some struggles…like she ain’t all the way fucking there. We all got demons and doubts and shit, but apparently for Avatar Korra, when she is unsure of herself, she be seeing Soul Caliber Korra in dark allies and shit. I’m gonna keep it one hunned with you cats, I love Korra, but if I saw feral ass avatar state Korra who’s fighting style can only be described as some mashup between Ghost Rider and Kratos, then I might not be at my best either.

We flash back three years with Korra, still FDR, leaving Republic City to go back home and recuperate. Asami Da Fictional Bae offers to go with Korra to the Southern Water Tribe while she recovers and all the Korrasami shippers heads looked like Krypton 12 minutes into Man of Steel.

I would love to keep calling Korra’s home the Southside Water Tribe, but I forgot these cats got that Stark wealth. They livin in the fucking Taj Mahal. 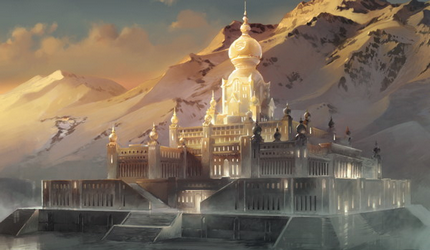 I be forgetting that Korra refused all that privilege to fulfill her role as the Avatar. She could be sittin at the crib making plebs travel to see her like the Godfather or some shit. Korra’s having nightmares about Zaheer almost serving her that sleepy time tea on that mountain side, but that’s the least of her worries. Its been three weeks and she on that vampire regement without any of the benefits (pick your own vampire lore, there’s way too many for me to give a universal example). She ain’t eatin. She ain’t sleepin. She losing muscle tone daily and even the royal robes are dripping off of her. You know what that means: TIME TO GO VISIT DA GAWD.

That’s right benders, I was hard on the writers for not having Katara in Book Three at all, but she BACK, best healer living, best to ever do it. She giving that wisdom to da kid to prepare her physically and mentally. And obviously, Katara ain’t too old to enjoy a Tarantino flick because step one to recovery was that Kill Bill, Beatrice Kiddo treatment.

I loved this, except Korra bout to be giving herself the pep talk in the back of the Pussy Wagon for six more weeks fam cuz this shit gonna take a minute.

(And yes, this last gif was necessary because I’m willing to let you cats dangle some on my obscure references, but I can’t have y’all out here thinking I said Pussy Wagon for no good reason when talking about a show on Nickelodeon for the TV Y-7 crowd. I got standards, b.)

Korra trying to walk them parallel bars but she ain’t getting her Gabby Douglas on any time soon.

The struggle is real out here and Korra spending more time on the canvas then she is bending across that hardwood. To make things worse, all of her people are out here flourishing. They gotta push away from the table cuz they are eating RIGHT. Asami Da Fictional Bae aka A.S. Rockefeller just got a contract to redesign Republic City’s infrastructure. Mako going on big stakeouts when he isn’t opening his letter sounding like the automated weather channel. Bolin of course writing his letters like the personified Alfred Prufrock. I half expected him to drop some Perloined Letter references in them joints to Korra. He’s joined up with Kuvira (Bolin Incorporated #1) to help stabilize the Earth Kingdom.

When we get Korra back with Katara for her daily fall on her face sessions, she is FED UP. Its been six months and she still Hell on Wheels. She goes off on Katara with this rant:

[quote_simple]Of course I’m frustrated! A crazy man poisoned me and now I can’t dress for myself, cook for myself or do anything for myself and this whole time my friends have been off helping the world while I’m stuck with you and you can’t even heal me![/quote_simple]

1) Korra, I love you. You’re my favorite, you really are. But uh…you better act like you got some gotdamn sense when you talkin to the blood bending gawd. Katara by way of Tenzin has given birth to NATIONS, homie. You better bottle up all that frustration into some muscle density and walk your ass up outta there before Katara human pretzel’s your ass. Sheeeyet, I almost wanted to go Detroit Red on Korra when she did that shit.

2) Wayment, wayment, wayment…Cook? Did my girl say cook? I mean, I’m skeptical, but I think we have been cheated on watching Korra throw down on the grill up on Air Temple Island one time or four.

3) Katara better than me, she looked at our girl like…

Korra apologizes, and eventually Katara gets her back on the beams to finally hit that two step. By the way, all accomplishments should be crystallized by hugging a big ass polar bear dog at the end of them.

Back in the present, ass-whupped Korra comes upon a dog that knows how to get rid of Soul Caliber Korra by barking at her…useful. She follows the dog because, THE FUCK ELSE SHE GONNA DO AT THIS POINT.

Flashback to the Southern Water Tribe where it gets up to 18 degrees in the summer and Tenzin comes to visit Korra and check her progress. We gonna do this shit frame by frame for maximum feels. The good times are short lived though because in her sparring demonstration, she still seeing Zaheer trying to hand her that unemployment instead of these scrubs in fire bending gear and gets waxed. Again. Outside of her threatening Tenzin with a water smack to the mouth when he tries to tell her to take it slow, the shit is all bad fam. Really bad. She writes Asami cuz come on, male or female, we would ALL write Asami back first to tell her how tough things have been.

Korra makes the decision to go back to Republic City, but on her way there, she poses for this dudes Wall of Avatar (who only includes Aang by the way). She even getting dusted by some petty thieves, y’all. Cats ain’t scared of her at all like she rockin the number 2 headband in Afro Samurai. Between her performing like Mike Tyson at the end of his career and seeing Soul Caliber Korra everywhere she looks, she decides she ain’t ready for Republic City yet and turns the skiff around. I know the chopping off her hair was supposed to be the most traumatic part of the next scene when she wants to be unrecognizable, but this the shit that got me:

NOOOOOOOOOOOOOOOOOO! Not the non-functional for decoration only armband Korra! That’s like Carmelo Anthony getting rid of his shooting sleeve.

She journeys all the way to the spirit realm and tries to meditate, but as someone who has a young child in the home, I know what its like to get no fucking peace. Gotdamn, can a bender get some quality Tree of Time by herself? Meanwhile she writing letters home that are about as true as police reports in officer involved shootings these days. Korra travels everywhere, finally walking through a city where she keeps seeing Soul Caliber Korra. SCK leads her to an arena and Korra thinks this is a sign where she can get her mojo back.

Well, I think this is where we came in, but now we know why Korra was letting this third string volleyball player give her that work, she’s actually fighting against Soul Caliber Korra this whole time.

Back to the present and Korra is chasing the dog up to a forest…which is really a spirit…in what is really a swamp. And guess who’s waiting for her there.

Let me tell you somethin, if you playing against someone on that Dreamcast and they got Soul Caliber Korra as their character, there’s a good chance you passin them sticks fam. She is NICE with it.

After getting her ass kicked…again…Korra finally wakes up in a cave that looks like its 100 feet underground with an old woman cooking up some stew and asking too many questions. And she knows she’s the Avatar. I ain’t gonna draw this out because y’all already know…

WELCOME BACK TOPH!!!!! Gotdamn we missed you.

And just like that, EVERYTHING IS ALL BETTER AGAIN.