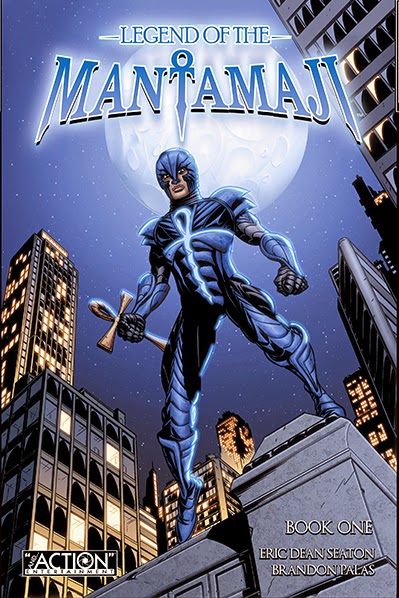 Being a comic book reviewer at a high-class joint like Black Nerd Problems means random, amazing things fall into one’s lap. Such was the case for me with Legend of the Mantamaji, a new graphic novel project from Eric Dean Seaton and Brandon Palas. Eric Dean Seaton is known as a sitcom director, and he definitely brings that sense of pacing to his writing.

Legend of the Mantamaji is consciously Seaton designing a Black superhero with the strength of Superman and the angst of Batman, complete with the all-powerful father who makes the ultimate sacrifice to defeat the ultimate evil and the sainted mother killed defending their only son, the last descendant of a supreme race — that’s who the Mantamaji are, the protector race of this little mess we call humanity. This is a modern fairytale and the first volume that is out now, comprising the first 6 chapters, introduces you to all of it in fast, colorful style. I should also mention he has the sarcasm of Tony Stark.

Our hero is Elijah Alexander, a bald, Black, Assistant District Attorney in NYC, who is about to either be promoted to DA or become a top attorney at a city law firm. He’s so charming and talented he can have his pick. His girlfriend, Sydney Spencer, is a detective in the police department, tasked with investigating an unusual weapons smuggling ring. She’s as good looking as he is and perhaps a little quicker on the uptake. She’s also a mean shot with a pistol. She is, in short, the Black woman of my dreams. They’re about to live happily ever after, maybe get a brownstone somewhere and have a few adorable brown kids. That’s when Elijah’s mom comes into the picture with the crazy news that the fairy tales she told Elijah when he was a youngster are true. There was an ancient city of peace and unity, there were a race of people gifted with superhuman strength and the ability to transform their will into any object they desired. To completely ruin the mood, the ancient evil is there, in NYC, about to do some damage.

Aside: When I become a super villain, I’m taking over Cleveland, or maybe Pittsburgh. Not NYC. People in NYC are too hip to that game. I mean, they get taken over all the time. Don’t you think they’d be on point for new villains? Now people in the Midwest…they’d be taken completely by surprise. Then I could consolidate power and make money before I tried to take over a bigger city. I’d be unstoppable! MWAHHHHHAHAHAHAHAH. Maybe I’ll start with Nashville. Nashville has good food. End Aside.

Of course it takes the appearance of said ancient evil, in the guise of a street corner preacher, to turn Elijah’s head, but once it is turned, the ass-kicking starts and it doesn’t stop.

The pacing in this comic is excellent. There are no dull moments and the foreshadowing of future allies and villains are perfectly placed throughout, with appropriate twists to keep you reading. There is an incredibly deep back story that takes up much of Chapter 3. That was when I understood what Seaton was doing, and liked it. Sometimes the dialog feels stilted, but that passes as you get into the characters. They’re classic on purpose, bringing all of the traditional superhero tropes to this whole new multiracial cast. This is one of the first comic books I’ve ever read that had enough brown people in it to look like it could actually have happened in NYC.

If I had a preteen kid in my life, I’d put this in their hands right now. This is a Black hero for Black kids, complete with a mythology rooted in a fantastical Nubia and a wide variety of characters, both good and bad. For us jaded adults, it is a fun romp that, while sometimes feeling corny, can easily become addictive. I have so many questions and the twist ending has left me hanging by a thread. I’ll be asking my local comic store to stock this one, for the kids and for myself. Book 2 of the series is excellent. Read the review here!