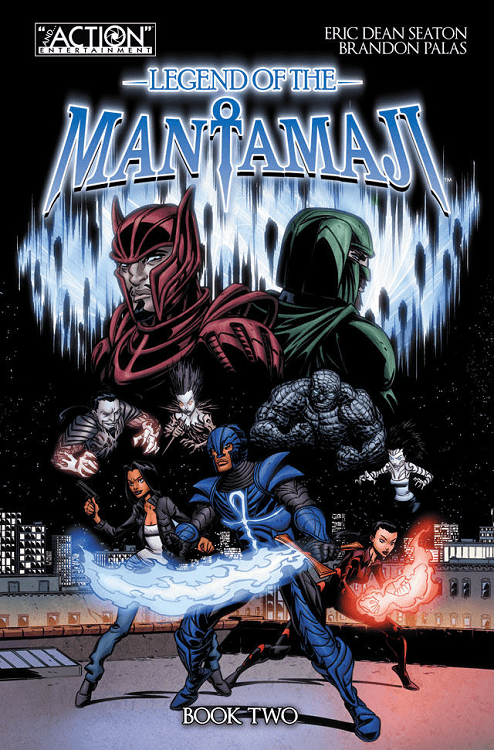 Legend of the Mantamaji: Book Two is out now and WOW did Eric Dean Seaton and his artistic team nail this one. I reviewed Book One back in November and any of my hesitations about Elijah Alexander (our hero) are put to rest in Book Two. Elijah steps out of a number of comic book tropes to become his own character. He develops into a Black American version of Black Panther, arrogant and cool, perhaps to a fault, but also passionate and engaging. He comes out swinging, driven by revenge and his new-found powers, but he does have a sense of right and wrong, which barely tethers him to his mentor, Noah. The Four Horsemen, (in order left to right) Touch of Death, Rage of Fire, Wrath of Plague, and Force of Stone, are an international conspiracy of rich and powerful, but low-profile, villains, supporting Brother Hope/Sirach in his ultimate goal — establishing a New World and bringing some select people back from the dead in the process.

We also learn more about the female half of the old powers, the Sanctuants. These women can conjure biogenic energy from within their bodies, manifesting it as flame or force or just plain old ass-kicking. I was disappointed that they didn’t get in on some of the fighting action in this book, but they definitely establish themselves as a force to be dealt with, one that has no allegiance to either of the remaining Mantamaji.

In Chapters 8 and 9, the middle of the graphic novel, we’re treated to an extended fight scene, where we really see what a Mantamaji, fully in control of his focus and willpower, can do. Needless to say, it is awesome, and a fascinating melding of many powers we’ve seen before, making the entire combat feel fresh and energetic. It does end about as you’d expect however: As the story progress, all of the secrets that Elijah is keeping begin to catch up with him, bringing us one of the most human scenes in the book – when his girlfriend/cop Sydney, finally brings down the hammer of truth. Sydney, mind you, is an untrained Sanctuant, something she can’t tell Elijah any more than he can admit to her that he’s Mantamaji – see kids, this is why secret identities are for shit. They’ve ruined many a sexy couple.
Book Two ends on a true cliffhanger – literally, Elijah gets thrown off a cliff – but only after he’s finally clued in to the REAL mystery of who’s manipulating who. No, I’m not going to tell you. That’s in Book Three!

It is all a fast-paced and enjoyable ride. Seaton really hits his stride with this one and draws the reader deeper into his version of New York City. The art is lush, and the color usage more varied than in Book One. Oh, and did I mention that more than half of the cast is Black/Brown? This is a graphic novel that puts money on its promises: Black characters, Black creators, any audience. It is a perfect pick-up if you’re looking for something new for your #BlackComicsMonth.

Psssst. Check the Preview of Book 3 and see if the Sanctuants kick some bad guy ass.