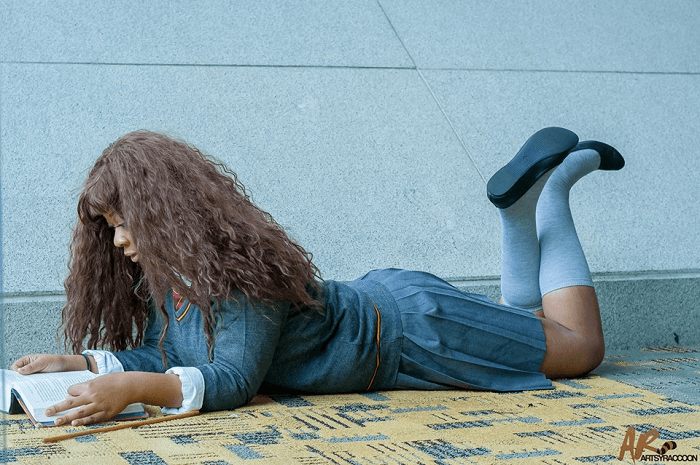 One of the beautiful things about great books, specifically pre-screen adaptation, is that they allow us enough room to comfortably insert ourselves into their world(s), especially when reality is often less accomodating. Very few places does this remain truer than in the massively successful Harry Potter series, and cosplayer Day of Khaleesi Cosplay’s interpretation of Hermione Granger speaks volumes to this effect:

[quote_simple]”Hermione Granger means the world to me. The Harry Potter series in general means a lot, but learning to love Hermione was a big part of my growing up. She was a constantly-reading, didn’t-like-sports, know-it-all nerd girl, and sometimes that made her great and fun to be around and brave and smart! She had real things going on, and real feelings, and real flaws. Oh, and on top of all that, she had huge frizzy brown hair and brown eyes and (to my mind, reading the books) BROWN SKIN. Even when the movies came out and they revealed her casting, I couldn’t get that little brown girl out of my head. Hermione made me feel like it was okay to be me, and that being me made me magical.”[/quote_simple]

And there’s no doubt about it: she is magical. Although Day claims to have “barely-passable sewing skills,” her commitment to the entire execution of the character makes this cosplay especially believable. In fact, I’m not entirely convinced that this wasn’t J.K. Rowling’s original intended version. When dealing with ignorant reactions to her uncommon interpretations, however, Day suggests balance as the remedy to a spectrum of offenses:

[quote_simple]”It’s aggravating, and it comes across in different ways, as blatant as the guy who told me to my face I was ‘inaccurate’ when I cosplayed Mello at sixteen years old, and as subtle as searching for pictures from a group shoot and not finding yourself in any of them. But I’ve learned the balance (or at least, I think I have) of looking away, of ignoring comments, but also of allowing myself to express my hurt.”[/quote_simple]

As for why she cosplays, Day says for one, it helped her “fight off” shyness.

[quote_simple]”I get to wear catsuits and robes and big, puffy dresses, and it doesn’t have to be Halloween. I even cosplay for that beautifully vivid headache you get from wearing a wig for too long. It’s an act of personal revolution for me, to spit in the face of those who think my skin and my hair and my nose should limit my expression of my nerdery, and I feel like it helps others to see my revolution and start their own.”[/quote_simple]

Check out more pictures of this and other fantastic cosplay from Day at Khaleesi Cosplay.