“If you are the big tree, we are the small axe.”
-An African Proverb

The summer of 2020 spotlighted an existing fight in America during the uprisings over the senseless and unprovoked deaths of George Floyd and Breonna Taylor by the hands of police. As art imitates life, no one would be surprised at an increase in the entertainment industry revisiting these events and dictating others in popular television shows and movies. When it comes to on-screen evidence of racial divides, police brutality and Black folks doing whatever is needed to do to survive & thrive, art need not imitate a thing. No stranger to the telling of these stories, 12 Years a Slave director Steve McQueen’s latest work is an ode to Black resistance across the pond.

Small Axe is an anthology series of five original films spanning a timeline from the late 1960s to the 1980s. These stories tell of real-life accounts from the West Indian community in London. For myself, and possibly others, Small Axe is a focused look at racism and discrimination against Black bodies in England. Black folks being terrorized is a global atrocity and direct effect of colonization that isn’t unique to the United States.

The fourth film in the anthology is Alex Wheatle, the true story of award-winning author Alex Wheatle, and stars Sheyi Cole in his silver-screen debut. Alex Wheatle covers the award-winning author’s life from a young boy growing up in a mostly white institutional/foster care home to a young adult finding community and his identity in South London’s Brixton. During this time, Wheatle was thrown in prison because of his participation in the 1981 Brixton Uprising against racist policing tactics and discrimination. I had the opportunity to speak with Sheyi Cole about his portrayal of Alex Wheatle, what it means to be an artist during a global civil revolution and his future nerd goals.

Black Nerd Problems: Okay, you’re 21 [years old], it’s 2020 and your screen debut in a leading role is in a Steve McQueen anthology! Tell me how you feel about that.

Sheyi Cole: It’s a lot, it’s a lot. I mean, I’m blessed. Very, very blessed and feel very, very fortunate. I’m extremely happy, as well, that the team over in the UK put their trust in me to carry this film… with such sensitive topics, as well. I’m just really fortunate and feel really, really blessed, yeah.

BNP: How did you prepare for the role?

Sheyi: Me and Alex were in close calls a lot, actually. His phone was always open, so any concerns, any questions…I just gave him a call. We also met a few time so I could get his energy- his sense of energy and his vibe, for sure. But, he’s such a lovely person and a lovely man that it was easy to open up to him the way that he opened up to me, as well.

BNP: It’s such a dynamic role, because Alex changed a lot from the beginning of the film to the end. Is there a particular scene in the movie that moved you the most?

Sheyi: I would definitely say the scene in prison with Simeon when he asks me about my story…and the sense of being in a place of no escape, the isolation, the sense, and the thought and feeling that there is nothing past these walls. It really hit me hard, it hit me hard and to be able to then fight and struggle against the big body, the big man that Robert Gee is – it was like the whole world became this small [Sheyi holds his pincer finger and thumb together in the camera, a familiar gesture for tiny], no way of getting out of it. The only way I could get something out was through a scream. That scream [Sheyi closes his eyes and shakes his head, seemingly in disbelief], it surprised myself. Yeah definitely that scene.

BNP: With the political climate as it is, with Black folks globally and the history of our struggles, what does it mean for you as an actor and an artist to portray a role like Alex Wheatle?

Sheyi: It means a lot. It’s such a responsibility. I’m really happy and really blessed that I’ve been given a chance to showcase it or speak about it. I wouldn’t call myself a politician at all, but I definitely do think my calling is to tell stories; to tell important stories that people can learn from and educate themselves from. For me, I wasn’t someone that was much heavy into books – I didn’t learn that way, and I know that there are people out there like that so for me to have been given this, is mind blowing… I also think, especially in England, I feel that our history has been put into a corner- swept up under the mat like we never existed, like us as Black folk after World War II didn’t help rebuild this country, ya know? The fact that we have been given this platform to tell our stories, to educate the youth- the younger ones, and even some of the older ones that wouldn’t be aware of the situations… it’s an absolute honor.

BNP: Is there a dream actor or director that you aspire to work with?

Sheyi: I definitely think, at the moment, I love the work that Jordan Peele is releasing. I’m in love with his work and also in love with the actor Daniel Kaluuya, so those two people are definitely on my list of people I’d love to work with. Also, I’d love to be part of the Marvel franchise somehow. I would love to play Miles Morales.

BNP: Okay, those are some nice shoes to fill. Literally and figuratively.

-At the end of the day, what is it that you want folks to take away from this film and also from this series as a whole?

Sheyi: From Alex Wheatle, I want people to understand that youth shouldn’t be given up on so easily. I feel, especially, that there are a lot of young people in this world that are defined by one mistake that they’ve made. I want people to really open their eyes and see that just with someone speaking to them [youth], someone taking their time that you can achieve great things. You can change the route of your life and become whoever you want to become. That’s what I want people to take away from Alex Wheatle. As a whole and as an anthology of films, I think for me it’s just about education… as what Simeon says in Alex Wheatle, “education is the key.” As you’re able to learn and understand, and know about other cultures, other experiences- for this anthology of films, particularly the Black British experience, then I feel it’s one closer step to eradicating prejudice and racism, and any form of hatred you have for or against another person just for the color of their skin. That’s what I really want everyone to take away from this.

Sheyi, an amazingly talented young actor, ended our conversation discussing a future of getting into more novels and the books of Alex Wheatle. He also went on about his love for anime, the Marvel Universe, and the need for more Black superheroes and anime characters. His love for the representation of Black life through the lens of Miles Morales was refreshing and joyful. Sheyi is most certainly one to watch.

Steve McQueen’s fourth installment of Small Axe, Alex Wheatle, premiers Friday, December 11th on Amazon Prime Video. You can find the other films there now. While there is no need to watch them in order, the film line up offers a refreshing “Black love as resistance” pallet cleanser with Lover’s Rock sandwiched between Mangrove (a retelling of The Mangrove Nine) and Red, White and Blue starring John Boyega. Make sure you check out Sheyi Cole starring as Alex Wheatle in his screen debut. 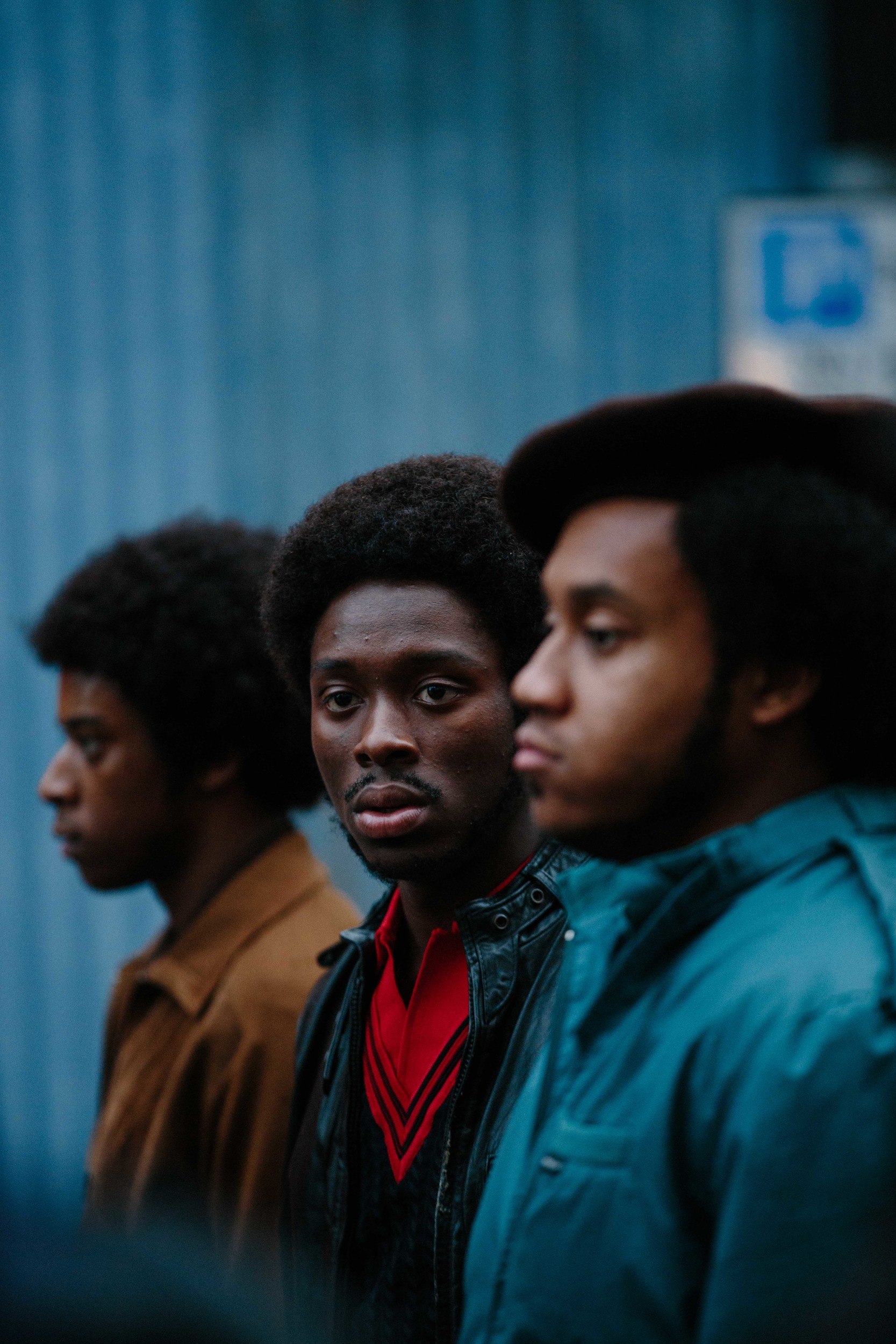