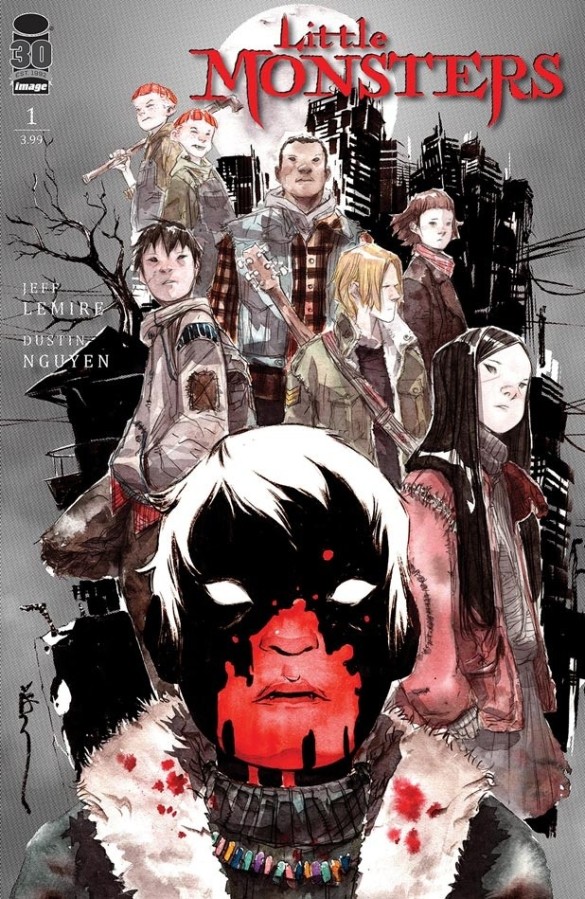 At the start of every week, I peruse a list of upcoming comics to scout out anything I might want to add to my list. Part of this ritual is taking a gander at any first issue releases. This week, I saw Little Monsters as a line item from Image’s line up and wondered what the premise of the work would be. Perhaps some cute, idyllic series that plays with monster tropes. And then I saw that Jeff Lemire and Dustin Nguyen were the creators, and I quickly realize that while it would definitely play with tropes, it would almost certainly not be idyllic in any conceivable fashion.

From the creative team that brought us the speculative fiction epic Descender and its sequel, Ascender, comes a new world that shares some commonalities but is an entirely different beast. Little Monsters #1 starts with an ominous unidentified narrator stating, “These are the children,” set to the backdrop of the desolate ruins of a city before introducing us to several different children going about their lives.

The pages are predominantly black and white with eerie splashes of color that are as striking as they are unsettling. By all appearances, the children are surviving on their own devices in squalor, and then the blood red shows up around their mouths and you realize that the last remaining children on Earth aren’t exactly human.

Little Monsters #1 is an atmospheric book first and foremost. Nguyen’s artistry alongside the lettering and design of Steve Wands is absolutely stunning, and the set pieces are just absolutely breathtaking. It is visually tantalizing and evocative in the best ways. Nguyen takes us through different parts of the ruins to great effective visual story. It starts with showing Romie exploring the empty streets, Ronnie and Raymond jumping off buildings with reckless abandon, Lucas on a broken bridge, Yui in an abandoned living room with books piled high, and Billie, Bats, and Vickie playing capture the flag on top the wreckage of the highway. The visual storytelling is on point.

And of course, Jeff Lemire’s words add more allure to an already attractive nuisance of the world. The ominous narrator says, by my approximation, twenty some words, and it absolutely sends shivers down my spine at the implications and foreboding. The dialog of the ensemble is pitch perfect for young vampire angst, and Lemire gives each kid a unique cadence and philosophy. Whether it’s Lucas’s ennui or Ronnie and Raymond’s devil may care attitude, it’s a nice, evenly balanced cast that I look forward to getting to know.

The foundation is solid, and this Lemire/Nguyen team up is a fantastic way to start off march.