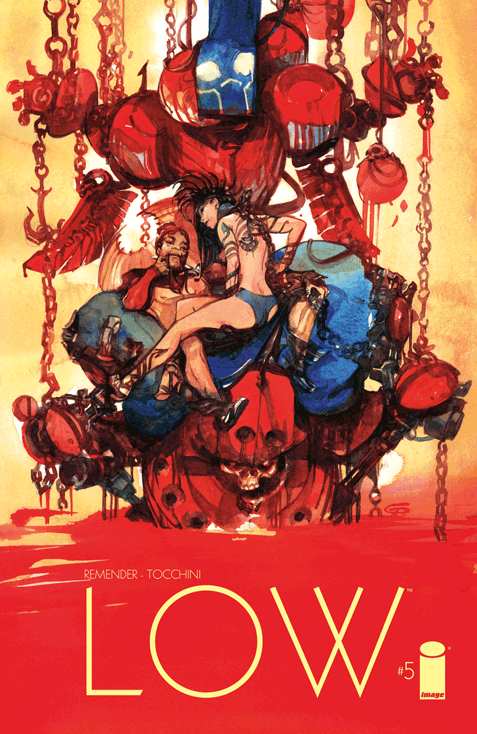 I have to give it to Shel. She’s one tough woman. This here is a character that I feel is well written and clearly cut out to be the protagonist of this story. I aint a “ride or die” chick but…I’m on board for her. Aside from her attributes of being optimistic, brave (read: fearless), determined and quick on her feet, she also carries the weight of the several burdens on her shoulders. One, saving humanity from extinction by means of the probe that promises life on earth above the waters; two rescuing her daughters and reuniting what’s left of her family and three–taking revenge on Roln, the bastard who wrecked her family in the first place.

On the first page of this issue we find that a few months have gone by since Shel and her son Marik made it to the forgotten city, the realm where the villainous Roln stays in all his filth and glory. Four months have gone by since Shel and Marik were captured upon their failed rescue of Tajo, one of Shel’s abducted daughters and Shel’s failed assassination of Roln. Shel, a prisoner is keeping her eyes open, keeping her resolve and keeping a strong face on all while doing pushups in her cell that’s dank and gross.

Roln approaches her to once gain give up the location of the probe and isn’t turned away by her die heard assurance that she’ll go to the grave with it. He expects this, he anticipated it and wickedly tells her he has the upper hand here. He has the life of Marik, her son fighting as a gladiator in the pits, the loyalty of Tajo the daughter that refuses to leave Roln’s side and the whereabouts of Shel’s second daughter which are unknown to her.  Roln even goes so far to tell her of his master plan: to kill Marik before her very eyes as he, the undefeated champion of the the fighting arena pits as they had been rigged today of all days to break her spirit.

And what follows is a terrific chain of events:  Marik goes off to fight bravely in the arena, Shel strives to get Tajo to join her efforts and a tiny fraction more of Roln’s backstory is revealed–there is a small but significant scene that sheds light on why he’s adamant on getting his hands on that probe and the new home it promises.

What’s next for Low?  This is the cover art for the next issue:

“How high is too high a price for tomorrow?”

is what I’m guessing is the tagline for this issue which will conclude  the first arc of this series. I”m stoked but also filled with dread because with how issue #5 ended, because I feel that some of my suspicions will come true. Meaning? More FEELS.