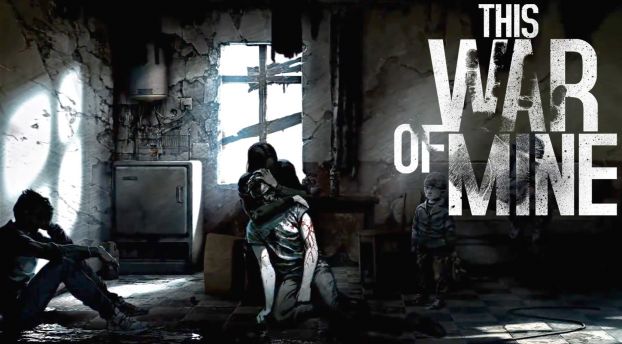 The folks over at 11 bit studios have struck the treasure trove of essential gamer experience in their new title, This War of Mine. The game introduces you to the unfortunate circumstance of living as a group of survivors in a city under siege. There are no game settings to change the scenario or difficulty settings; the game drops you right into a house that appears to have seen its fair share of tumult with a group of survivors who maintain a specific personality and skill-set throughout the experience. Your mission is simply to survive and the game affords you the ability to make tough moral choices, throughout, as to how you wish to go about surviving.

Case in point, every night you’re offered the chance to go scavenging for food, materials and weapons and varying locations, some of these locations offer huge resistance and danger to that endeavor and are usually the locations that harbor bandit groups and malevolent NPCs; there are, however, locations that offer little to no resistance with no imminent danger wherein you’re posed with a decision on whether you want to force, rob or even kill your way through the site in order to scavenge their stocks freely. These scenarios present very interesting and felt effects on your survivors as the scavenger you’ve selected can fall into terrible depression and ultimately even commit suicide as a result of the weight of their actions. Other survivors living in the house with you can also feel these effects to a lesser but imminently as important extent as they question the moral compass of the surviving group in what they’ve had to become in order to survive this war of theirs.

The noir pencil artwork in this game is absolutely gorgeous, combined with the score, 11 bit studios casts the gamer deep into an experience that can be felt for hours, even days, after a long session of play. During the day, your responsibilities are to keep the survivors well fed, take care of any wounds, manage sleep cycles, keep the house warm and use the stock of supplies that you’ve scavenged to build new improvements that both safeguard and make life easier. Though this doesn’t sound like much of a task list, the weight of these responsibilities and the time within which you have to do them, before night falls upon your survivors once more, can become daunting with the unexpected visits from neighbors or one of your survivors falling ill. The bevy of options that This War of Mine allots you allows for incredible replayability value; after my first 15-20 games I decided to simply cycle through new games to see what random situations I’d be dealt, whether it be having Roman the ex-military survivor who has plenty of combat experience for taking on bandits in ‘danger’ locations or being thrown into surviving in the middle of the winter where heat becomes a priority over all else.

If you haven’t already done so, go check This War of Mine out on Steam going for $19.99 at the time of this post. It’s twenty bucks well spent if you value a game that is as complete as is it immersive. 11 bit studios has also made announcements about content updates in the future and trust me when I say with the groundwork that’s as polished as it is for this title, the game experience certainly will raise your eyebrows a few inches over your head with content updates.