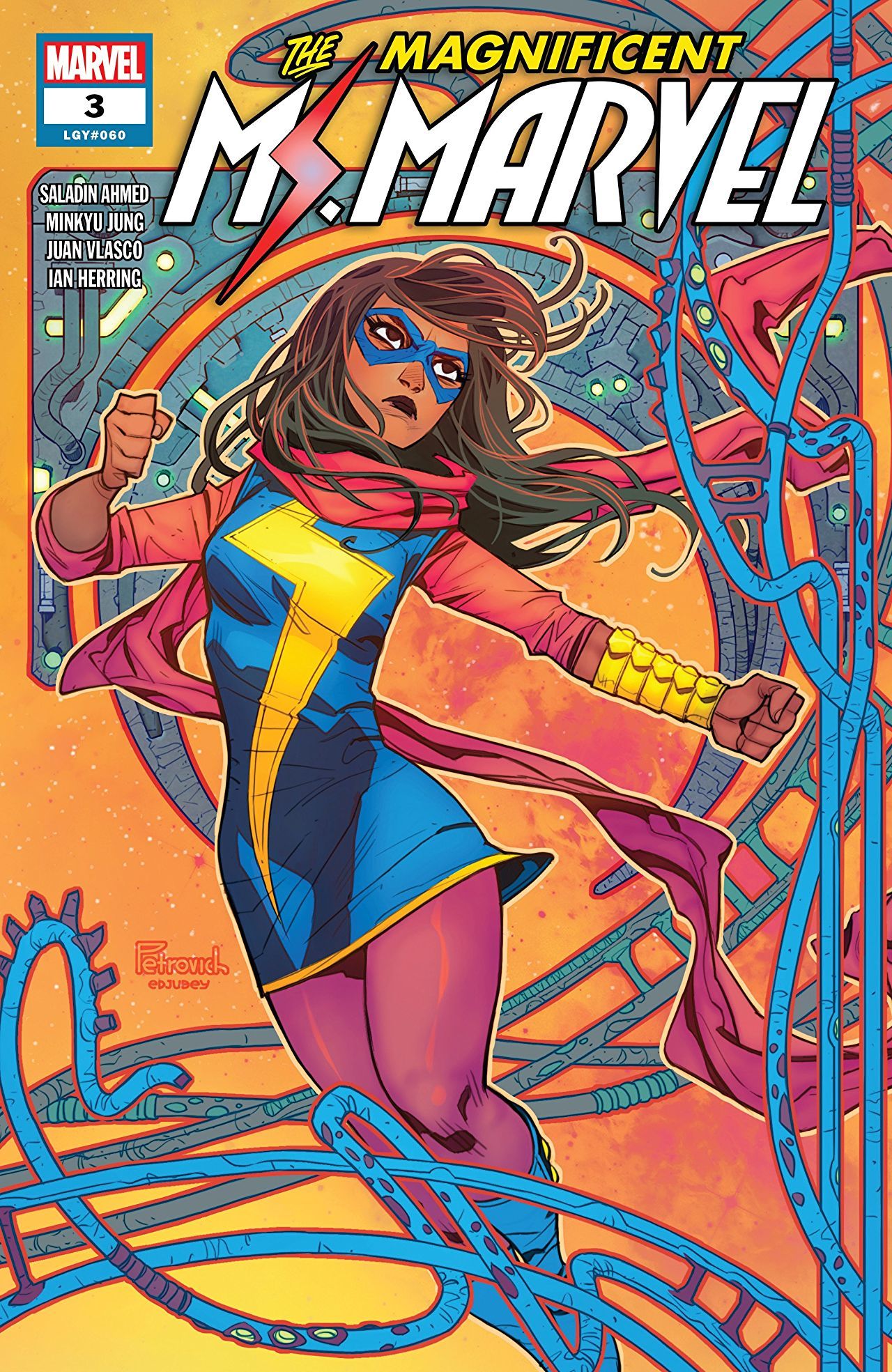 This week brings us the third issue of The Magnificent Ms. Marvel since the character’s co-creator G. Willow Wilson handed the reins over to Saladin Ahmed. Last issue, Kamala discovers the origin of the series of attacks on Jersey City that included the kidnapping (after the fake death) of her parents. Aliens from the planet, Saffa, have come to Earth searching for The Destined One. Their legend tells of a righteous warrior with the Ms. Marvel symbol who delivered their people from slavery. This hero would return to defeat the slavers again. Allow me to paraphrase the next conversation between Kamala, her parents, and the aliens.

Kamala: I have to go to their planet and help them.

Mom: Let’s go with her 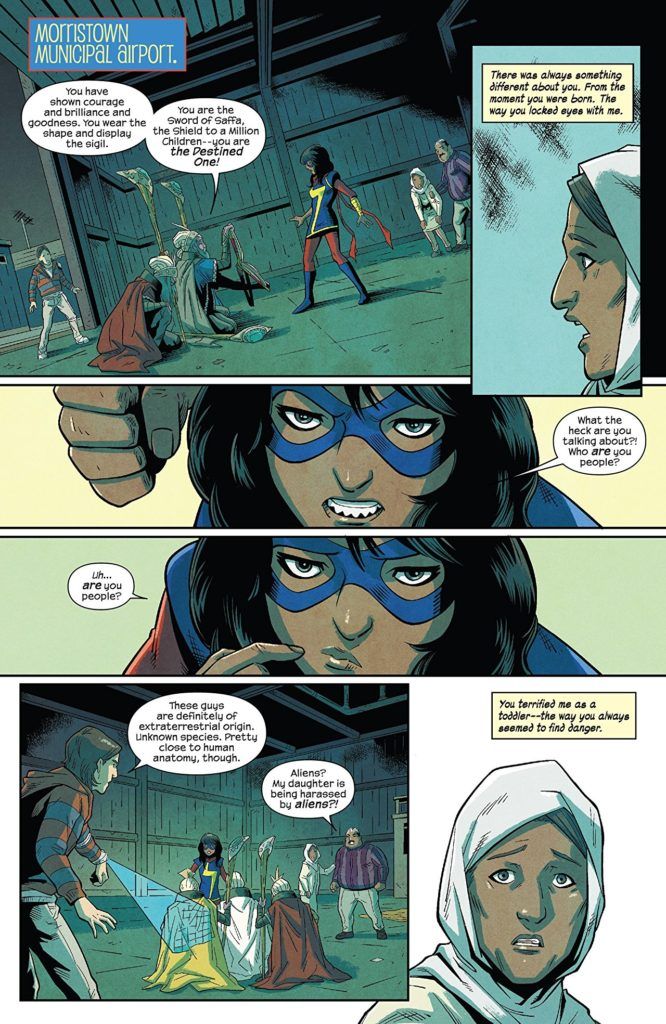 The family is hastily transported to Saffa where they are met by the planet’s ruler. They receive a royal feast before the next day of planning. The revealed death of one of the transporters in order to teleport her to the planet and a mysterious stone pillar pinning a child are red flags. Kamala’s parents are rightly suspicious, unlike her until she wanders off and over hears talk of a prisoner and witnesses his torture. Faced with this new reality, the Khans follow the prisoner (a supposed leader of the Free People of Saffa) to steal a ship and escape with him.

This book hits some of those points that make Ms. Marvel a great book, playing on Kamala’s heroism and various references to her Pakistani culture (she wonders if the alien food is halal). The strength of this book, though, lies in the backdrop of Kamala’s mother narrating. She tells a poetic story of Kamala showing the signs of a selfless hero when she was young and how scary that was for her. She goes on to declare her dedication to keep her safe while she keeps others safe. This book has a beautiful theme of family. Kamala’s parents are protective yet their daughter believes they are being overly cautious and that she has everything under control. We’re tempted to side with Kamala, after all she is a superhero, but the story respects the parents’ caution. They peg the situation as suspect real quick. 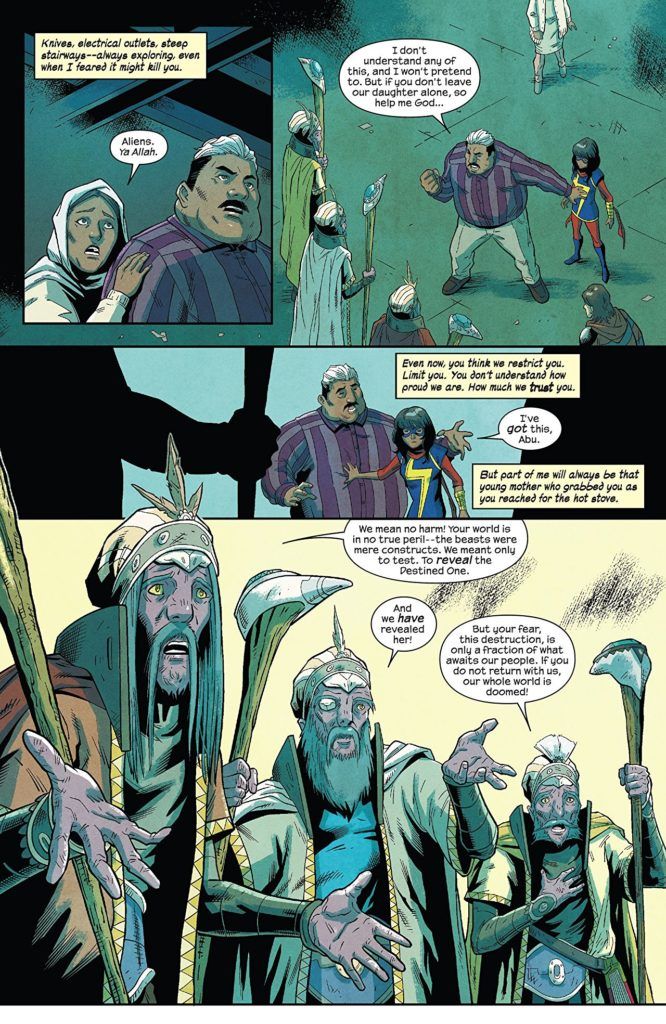 The book has the potential to be incredibly relevant to Western foreign policy, as Kamala finds herself in the middle of a conflict between a despotic ruler and a group of rebels with a name that reminds the reader of the “Free Syrian Army”. I look forward to seeing this story fleshed out and watch where Ahmed takes us.