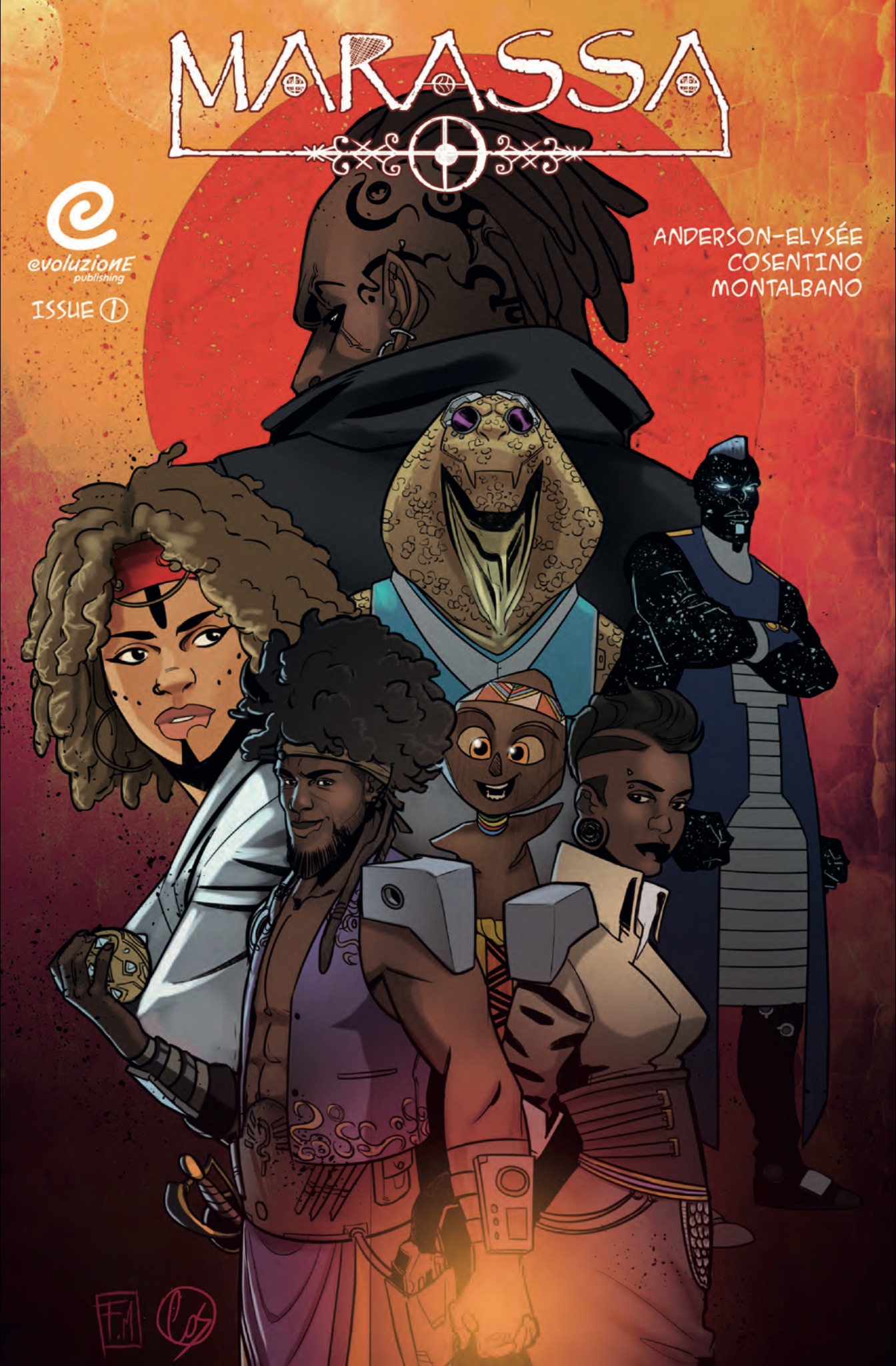 You see, for me, one of the most important parts of any sci-fi is the world-building and the characters. What does your vision of the far future look like? It’s got aliens? Cool, cool. Space pirates? Okay, dope. I’m digging that. A cast of mostly black and other characters of color, all unique from one another, embroiled in a mystery and the beginnings of an epic space adventure. Oh, yes. I’ll have some of that. 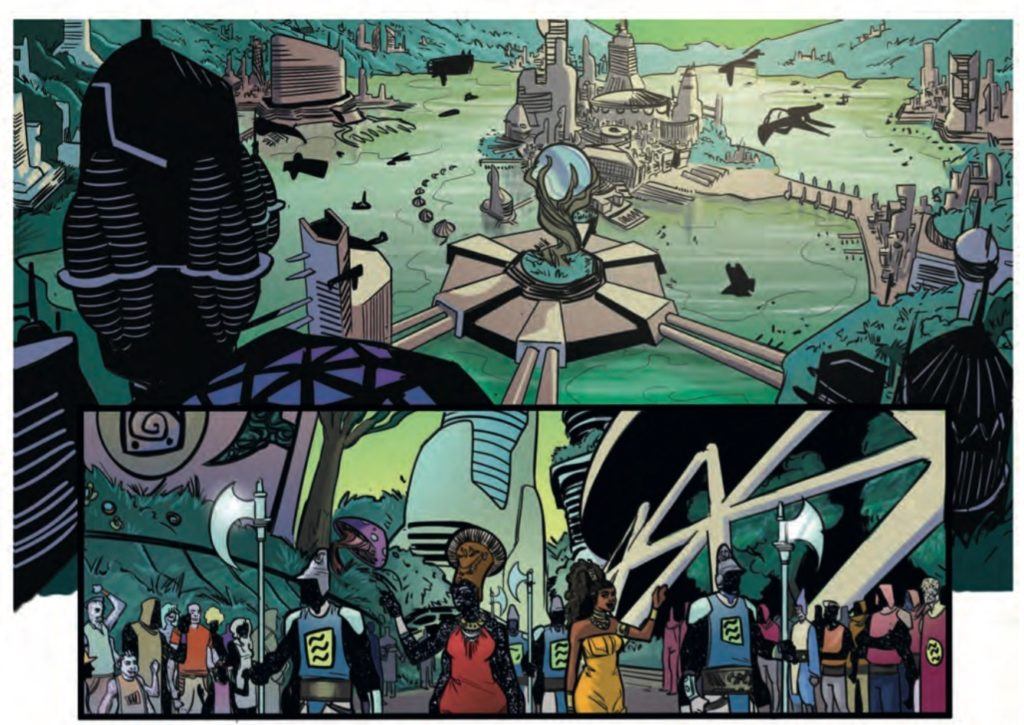 Marassa by Greg Elysee and Antonello Cosentino sets up a universe full of badass space pirates, unique futuristic technology, and humans coexisting with all manner of aliens. It’s pretty much your standard affair when it comes to sci-fi tropes. However, what sets it apart is its cast of mostly POC characters and the tone it brings to the genre. From the characters to the setting and plot, everything just feels different. 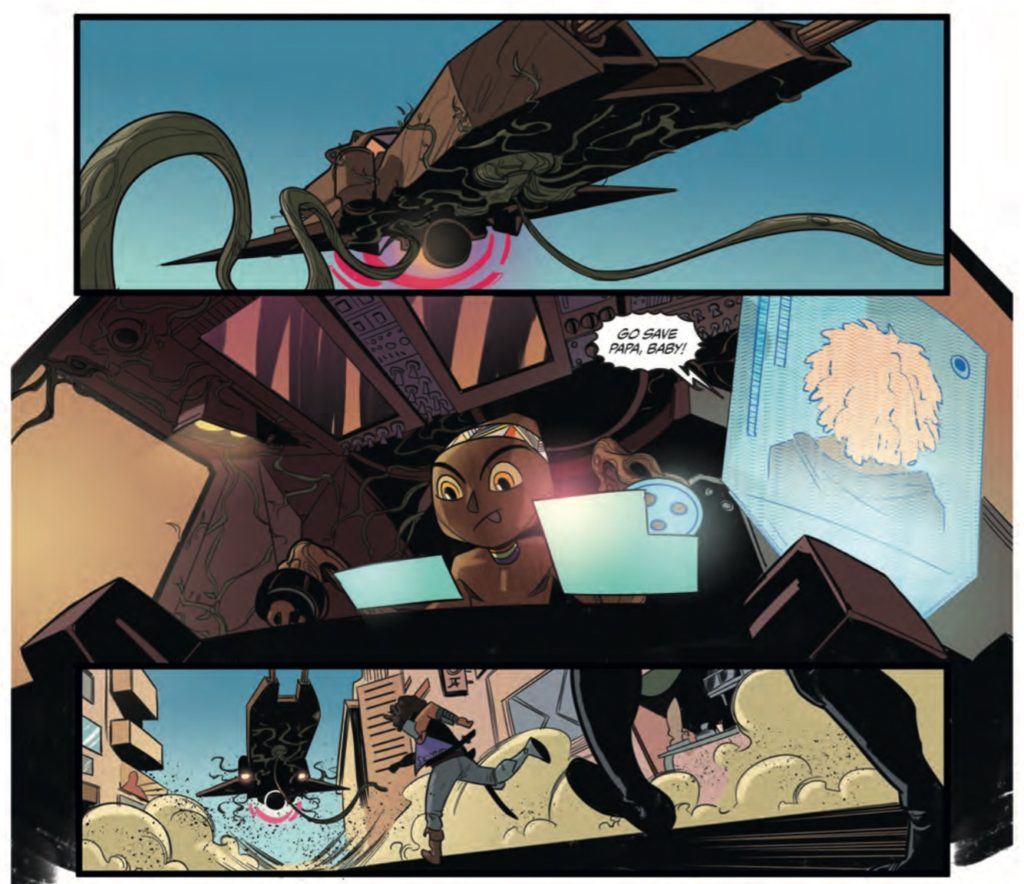 The way characters talk, the crazy wooden technology, the worlds we see and even the designs of the aliens feel inspired by a touch of black culture. It’s not exactly revolutionary when it comes to sci-fi but there is enough style held together by a strong plot to keep us wanting more. If the opening issues are anything to go by, Marassa does everything right, making it the start of a great black space opera.

Where the Journey Begins

The story follows twins Mara and her brother, Sa. Mara is a former pirate, living the life of luxury in what I can only describe as futuristic space Wakanda with her husband, the alien prince, her mother-in-law, the queen, and her two children. Meanwhile, her brother Sa is a space pirate, known to be troublesome, confident and for others, somewhat annoying. Riding the cosmos with Sa is his “son” Petit, an adorable humanoid and childlike wooden droid who has a few secrets of his own. 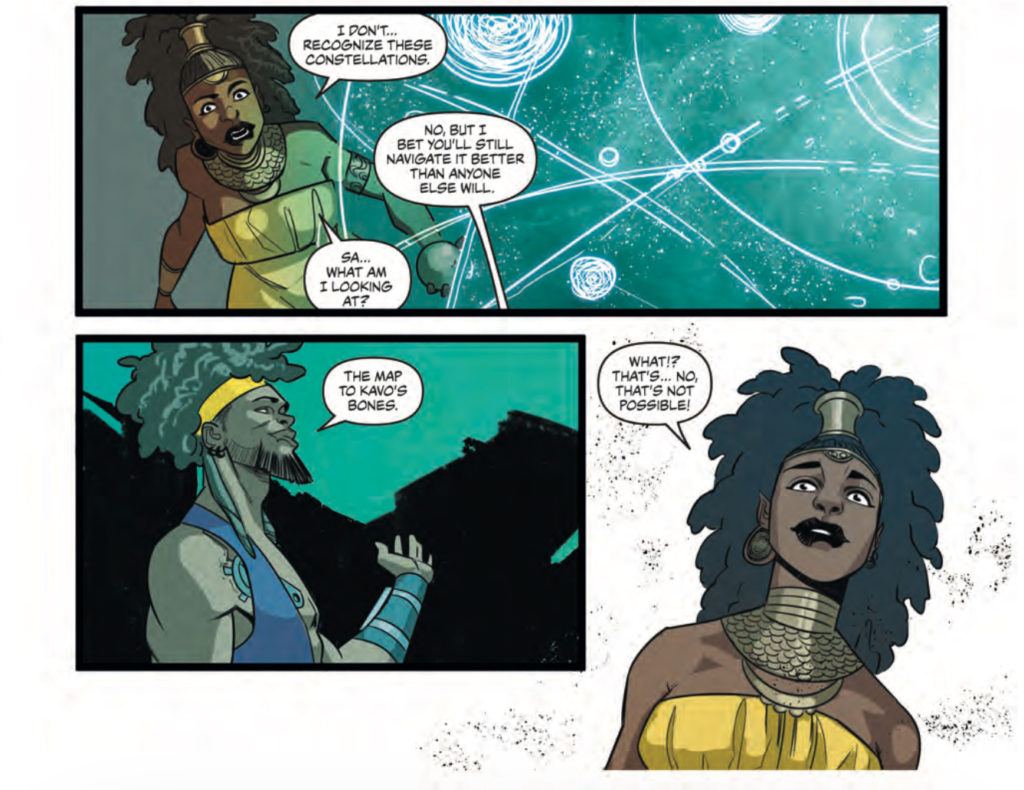 Everything unfolds when Sa and Petit steal the supposed map to Kovar’s Bones, a fabled treasure that Mara and Sa believe to be their claimed birthright. So obviously the map is a pretty big deal. So much so, that it brings Sa right to his sister’s doorstep to try and convince her to put on her pirate hat once more. Unfortunately for him, she left that life a long time ago and decides to pass on her brother’s offer. A decision that she’ll come to regret. 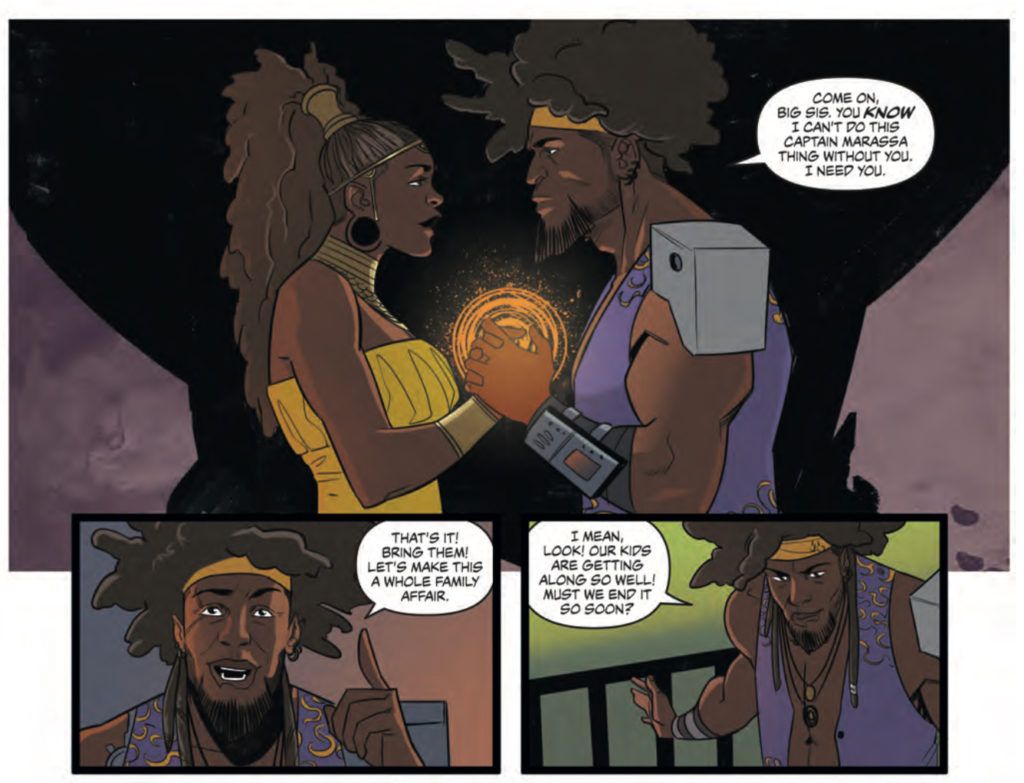 If you are wondering where their names come from, both Mara and Sa are based on the Vodou myth, Marassa Jumeaux. A myth about two divine twins who are Loa or gods. As of yet, I’m not sure how much of the myth they are based on. However, this myth and the idea of “divine twins’ is definitely the framework of their relationship.

The two share an empathic connection that allows them to sense one another across the galaxy. When they get close to one another, they can feel it. It’s an ability that is passed on to Mara’s sons. Even with what little time we see Mara and Sa together, you’ll notice there is a strong relationship. At one point, the two were inseparable but Mara’s retirement and decision to settle down put a strain on that relationship.

The two siblings are at the center of this book and Elysee handles their characters pretty damn well. Mara and Sa are both charismatic and filled with so much personality, yet unique from one another. The strength of their relationship, their empathic connection is a strong focus in the first issue and set in motion a lot of the events for the second issue and from what I can see, the rest of the series.

Marassa’s story moves fast in its opening issues. The first, in particular, has one unexpected moment towards the end, which I personally took as a note to the reader that anything could happen. Meanwhile, the second issue is heavily influenced by the first’s shocking ending, moving characters into place and setting up what’s in store for the rest of the adventure.

Thankfully, the plot is easy to follow and none of the characters get lost in the action. A lot of that is thanks to how well Elysee handles the cast of characters and pacing of this book. Mara and Sa are the central focus, and sometimes it feels like others in the book are influenced by what is happening with those two. However, every character has their own personality and interactions between them are fun and engaging. 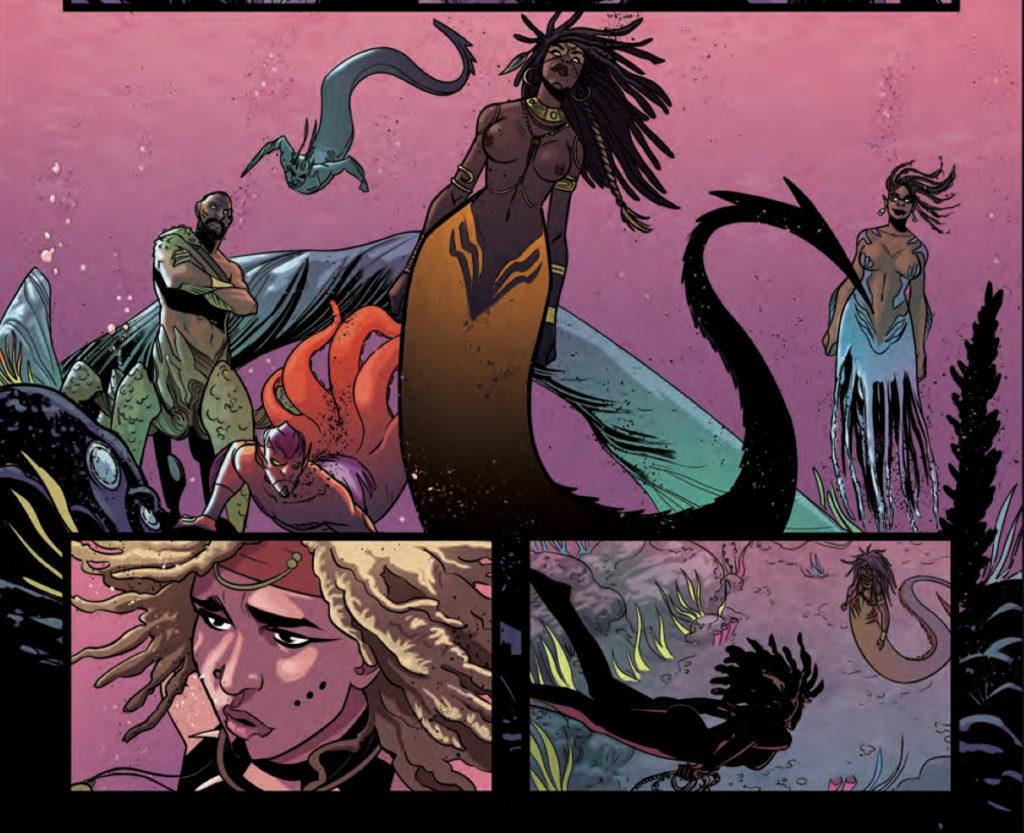 Another plus is the art style. If Elysee brings the characters to life, then artist Antonello Cosentino compliments that by making the universe of Marassa pop out on the page. The art has a simple touch to it but Cosentino’s artwork perfectly matches all the different elements of this sci-fi adventure. From the more futuristic aspects of the first issue (ships, settings, aliens) to the more mystical second issue (visions, loa).

Let’s not forget about the characters or actions either. Seeing a book comprised mostly of people of color is always a treat. They’re drawn in a way that feels right, which is sadly not something you can say often when it comes to artists drawing minority characters. There is also a lot of action despite most of the plot feeling like a prologue to a greater adventure. So, if you are looking for things like fights on space ships, chases on alien worlds and more, you won’t be disappointed. 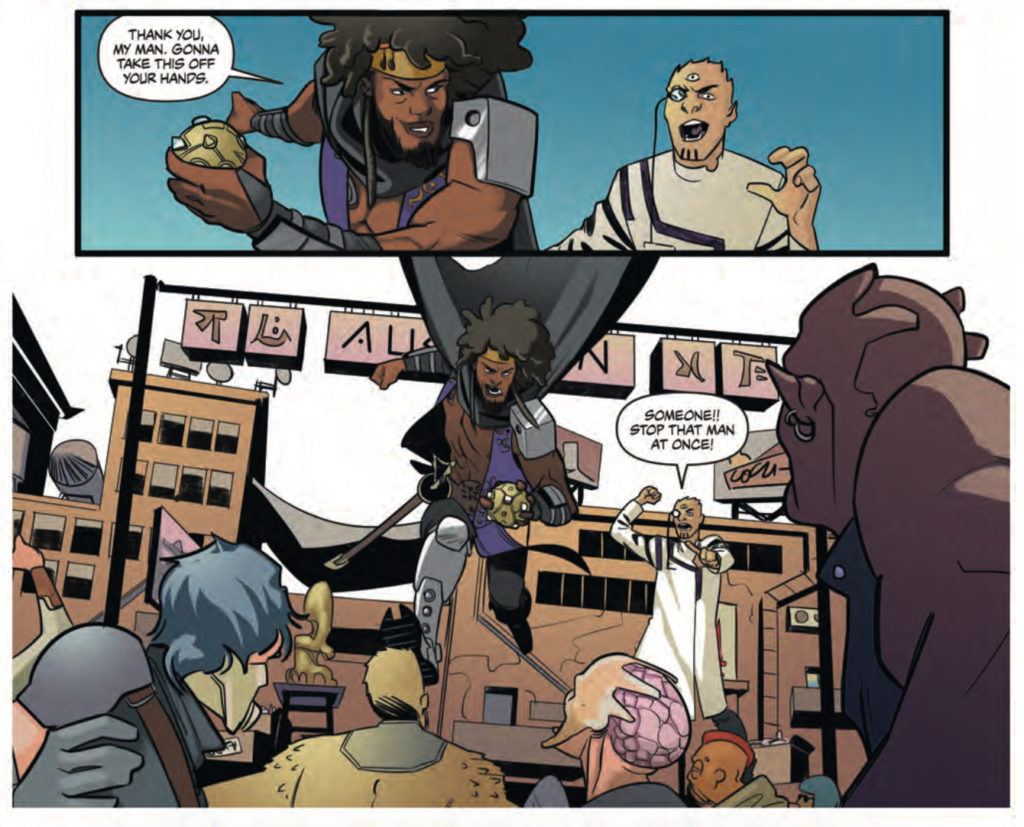 In the end, Marassa is a fun book that I hope continues past these opening issues. It does sci-fi well and feels like a tease of better things to come. It’s filled with action, amazing art, great character relationships and a mystery that is just begging to be unraveled. And there are a lot of unanswered questions by the end of the second issue. So, read Marassa for yourself. I highly recommend it for anyone looking for some good sci-fi or an excellent black space opera with plenty of drama.

9 Wooden Mask Babies out of 10

Pick up a digital copy of Issue one and Issue two of Marassa here! For physical copies, reach out to the writer, Greg Anderson Elysée.