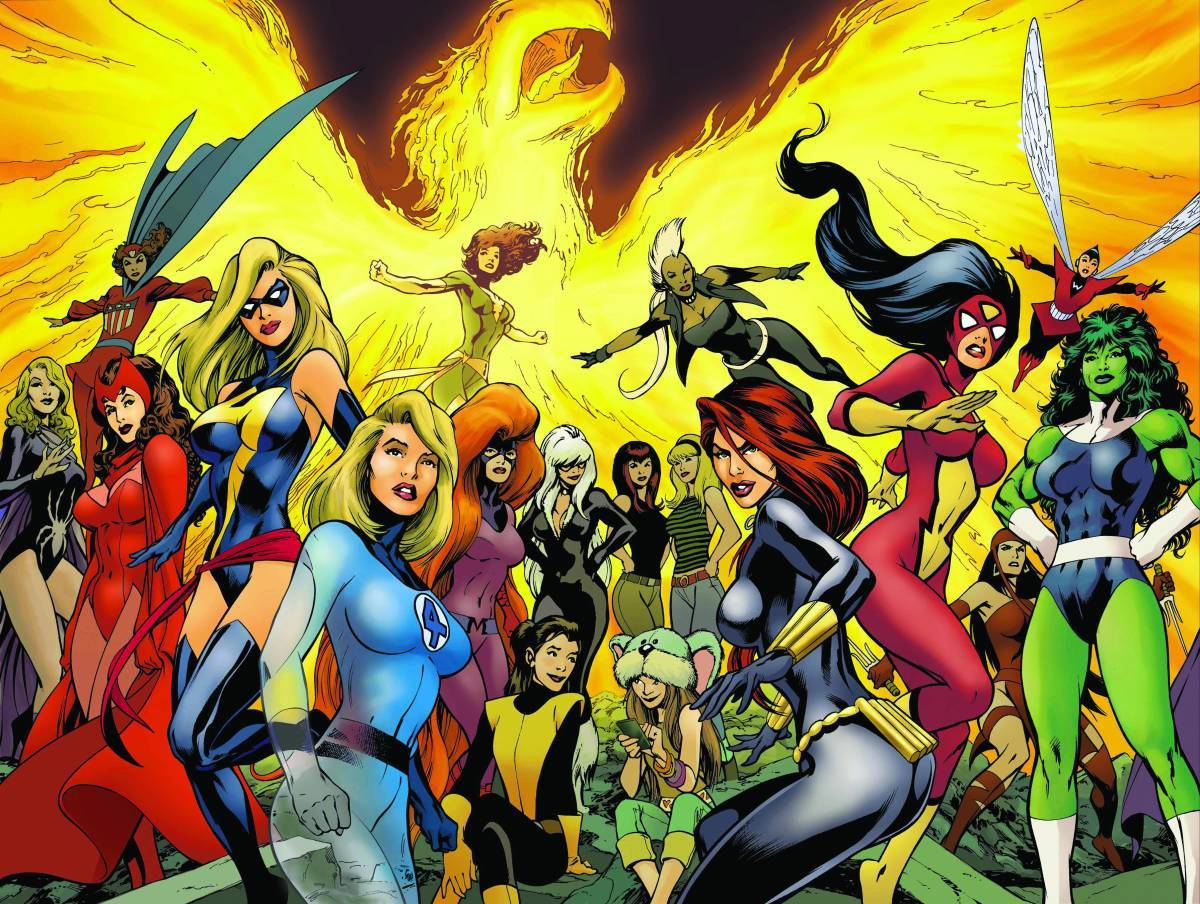 Imagine Shuri and RiRi Williams designing insane weaponry for the team in some billon dollar lab filled with Wakandan technology. Imagine America Chavez and Elsa Bloodstone kicking star shaped holes into the fabric of the multiverse and destroying monstrosities all throughout countless realities. Imagine Emma Frost and Captain Marvel bickering about what the next move should be when Carol just wants to have a nice convo with her bestie Spider-Woman, while Boom Boom is off blowing shit up. Imagine the possibilities!

The Lady Liberators set the bar, despite the devious things that were happening behind the scenes, and were followed by a number of all-women teams who stepped up to save the day and showcase just how smart and powerful a group of femme fatales can be. The Fearless Defenders were a dope team led by Misty Knight and Valkyrie. The number of X-(Wo)Men squads that have graced Bast’s green Earth is quite impressive. Then, of course, we have A-Force who came through flexing feminism and supreme ass kissing, establishing the blueprint for a female superhero team in today’s comic industry.

Say hello to the Griot powered Crowned Queen of Wakanda! The summoner of the strongest Wakandan warriors from beyond the grave! The vibranium spear tossing warrior! The (arguably) smartest person in the Marvel universe would be an invaluable member of this team.

She doesn’t have the name recognition that most of the other women on this list do, but she has every other bit of their amazing qualities! Elsa is a Bloodgem powered monster hunter with incredible marksman capabilities and killing skills. She may be just as immortal as her father was and is definitely one of the most foul mouthed badasses on the planet. Sounds like an instant win.

We all need that one homegirl to keep us in check and America Chavez been about this life since she was a youngin! She’d infuse a much needed dose of queer into our lives and keep all pronoun usage proper. Miss America has been on a number of teams since she joined the Marvel universe and goes Jordan every time, making everyone around her better. The team would inevitably face a threat bigger than this planet or reality could handle, so having a portal punching Latina with some of the spiciest one-liners imaginable would be a great look.

The powerhouse. As one of the strongest members of this team, she would be an obvious threat to whatever villain that was terrorizing the planet. She may get targeted early and often, but always manages to find a way out of dire situations. Carol Danvers is confidence reincarnate. She may not be droppin any St. Crispin’s Day speeches, but Captain Marvel would bring these women together in key superhero moments and let her hair down when it’s time for Karaoke or an Escape Room. A natural born leader with a personable side, Carol would mesh with any eclectic group.

Every team needs a wildcard and you need to look no further than Boom Boom for your reckless resident of the group! Sure, her powers may not extend much further than being really talented at making things go boom, but Tabitha Smith embodies controlled chaos and contains a special sort of penchant for getting shit done. She’s a klepto who loves a good whiskey and is always up for a rootin tootin good time. What more could you want in an impulsive ratchet cousin from down south?

We need a mean dosage of cool in this all-woman team, and Riri consistently exudes dopeness without breaking a cocoa butter sweat. It doesn’t hurt that she’s a super genius and would work incredibly well with Shuri. Ironheart would take this team to the next level with all the intelligence of a Tony Stark and none of the pompous antics.

Jessica Drew may not be the most popular spider person, but she has all the wall crawling talent in the world to be just that. With a background in espionage and 1-on-1 hand to hand training by Taskmaster, Spider-Woman could give you the BUSINESS on the low or in broad daylight. Her invulnerability to radiation is a major factor in so many potential situations. She has the “it” factor that makes people love her all across the universe, and her pedigree as an Avenger is top notch.

The character I believe to be the most invaluable member of this team is Emma Frost. She’s been on the villainous side of the fence and progressed to a bonafide hero topping the X-Men ranks. Her leadership talents have long been cemented and working alongside these heroines will come easy after teaming up with so many mutants over time. Her telepathy and diamond form will clearly come in handy on the battlefield, but it is her unsung talents that will be on full display, for all to marvel in. That business mind will ensure the team is properly bankrolled and allow for Shuri and Riri to have unlimited funds at their engineering disposal. Her fashion sense will drop jaws, her sex appeal will dazzle, and her unbearably sharp wit will silence any that dare engage in a verbal sparring match.

By now you’re probably thinking something like, why not Storm? Black Widow? She-Hulk? Sue Storm? Kamala Khan? There’s just something about this mix of women that really gels, and I would love to see one or all of these ladies get a shot at being a squad member. I want Eve Ewing, Kelly Thompson and Gabby Rivera all getting fat checks to kick their feet up in a well ventilated writers room, with rose cider and Incredible Hulks on chill while they craft this incredible tale. There’s a tear coming to my eye just thinking about the glory that would ensue inside that room.

You can find tons of suggestions for the next all-woman movie on the interwebs, but they’d be filled with the same ol’ heroes we’ve seen for the last decade. While, I would welcome that movie, a comic book team affords you so much more! Fans can be blessed with surprise hitters, no name beasts, and personal faves, and that’s why Marvel should bestow a book on Shuri, Elsa Bloodstone, America Chavez, Captain Marvel, Boom Boom, Riri Williams, Spider-Woman and Emma Frost!