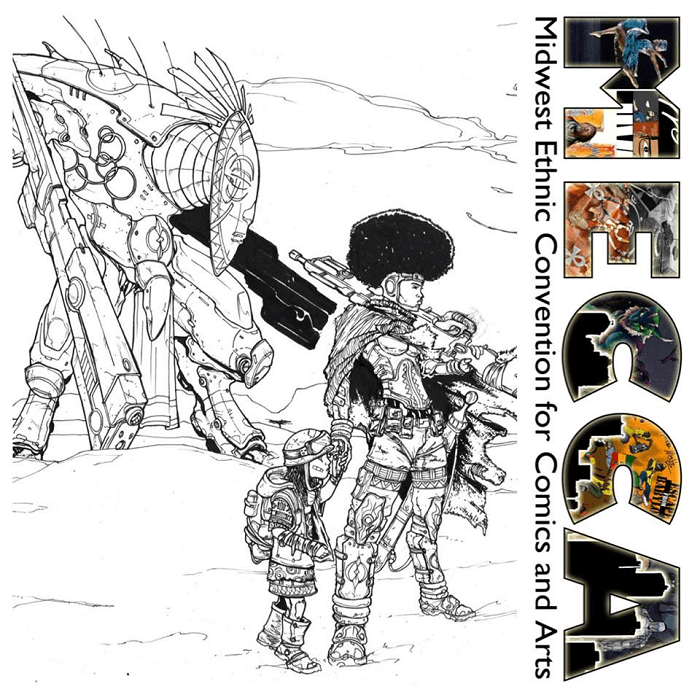 *Update: MECCAcon 2015 has secured its location at the Detroit Public Library, 5201 Woodward in Detroit, MI, and will be held on September 19th from 11am-7pm*
Conventions are rapidly growing, and for supporters of diverse representation in comics there’s nothing better than conventions dedicated specifically to those ends. A sense of belonging is a curious thing in comics lately, and if you’re on this site you probably nerd hard in the paint and consider representation important. Enter: MECCAcon. You won’t find a better atmosphere and more opportunities to support your favorite writers, read diverse characters, and meet spectacular nerds, so it’s obvious your trip to the Midwest should be scheduled for September.

Black Nerd Problems talked with Maia “Crown” Williams, the founder and organizer of MECCAcon, to learn more about your next favorite convention.

Black Nerd Problems: What is MECCAcon?

Maia: Midwest Ethnic Convention for Comics and Arts – or MECCAcon – is a large comic book and artist convention held annually in Detroit, MI. I started developing it October 2013. The primary reason MECCAcon was established was to instill knowledge primarily in the younger art culture. I also wanted to show Detroit that women know about this stuff, too. We read and watch other things besides romantic mumbo jumbo. It is my mission to make sure that children know that all “heroes” do not look the same; that many actually look just like them. It is also important to learn the origin of comic books, what the historical facts come from, and what the word “hero” actually derives from. I am very much into knowledge of self, and I love to share my knowledge, but in a fun way. Children in all communities love comic books and art. Unlike many “comic cons,” we don’t focus only on comic books. Art has several mediums, especially in Detroit, and we want to highlight them all. MECCAcon aims to highlight comics, science fiction, steampunk/steamfunk, fine art, music, graffiti, black speculative fiction, DJ artists, handmade artisans, urban gardening, fashion, African martial arts, and more.

BNP: What is the biggest challenge you face organizing a convention like this one?

Maia: Money is the biggest, and being taken seriously as a woman in this business comes second. Funding is crucial in all aspects. All of the finances weigh down heavily, especially for the simple fact that 90% of it comes from my own pockets. It can be stressful, and sometimes mentally draining at times. I like to focus on the children’s faces every time I get that moment of “what the hell was I thinking?” 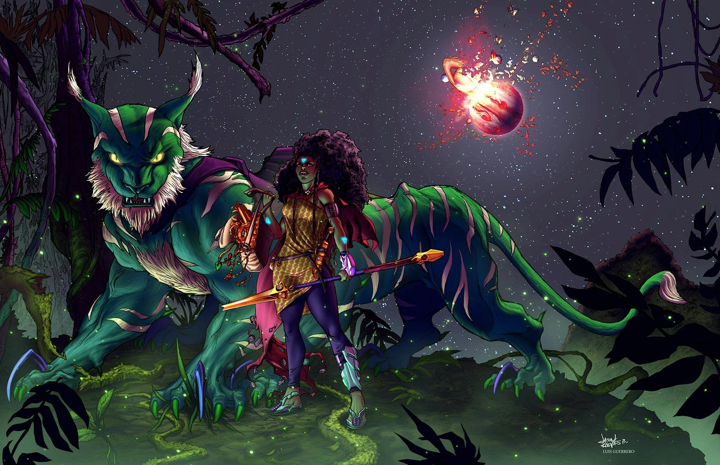 BNP: Sounds like a ton of work, and really taxing.

BNP: Where did the idea for MECCAcon come from?

Maia: Are you referring to the name? Well, this is Detroit. Detroit is globally known in the Black Muslim and Moslem community – yes, there is a difference – as “D-MECCA”. Because this is Detroit, as well as this being a comic con, I wanted to use play on words. My brody Shawn Alleyne (Pyroglyphics Studio) came up with the acronym. We were both excited about it, to be honest. It’s basically a play on Mecca/MECHA. Last year, he did an insanely out cold illustration for the convention. It was a mother, her child, their mecha, walking like they were taking a pilgrimage to Mecca. Hella dope, indeed. Jason Reeves (133art), also an official MECCAcon artist, did another picture of a couple and their two children looking like they were doing the same, but the Mecca was also a play on it being the convention. Hella dope, as well. N Steven Harris (NS Works, Ajala, Watson and Holmes) also did one, which aimed at the hip-hop aspect of it all. 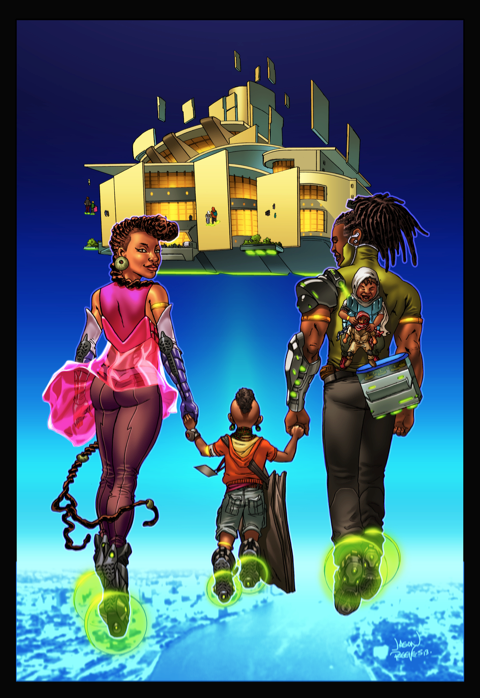 Maia: My event, as with many others that are similar, is important because these babies in my community are important. When I say I do this for them, I don’t say that because that sounds politically correct. I completely mean it. They need to know that they too can fly, control their actions, and heal their city. I also do it because anyone who knows me knows I geek out on anything having to do with art. I’m everyone’s Don King. I wanted to do my part in helping artists not only get more exposure, but helping them help others get exposed to them. It amazes me how many people still only deal with Marvel, DC, Image, Hound, etc. I want one day for indie comics to not have to be classified as indie comics. I want those not signed to major labels to also be the norm.

BNP: As well as being Black History Month, this month has also become #BlackComicMonth and #28DaysofBlackCosplay. What are your favorite comics that will be represented at MECCAcon, and what cosplay would you love to see?

Maia: To me and my own son, every month is Black Comics Month. I support all year long, not just when society tells me it’s socially acceptable. I’m Black 365, so I buy Black 365. My favorite comics and books for MECCAcon? Hands down they would be Kam Komics, One Nation, Eating Vampires, Ajala, Horsemen, Malice in Ovenland, Aizan, just to name a few. As far as cosplay, I just love to see it period, so it wouldn’t matter. But if someone came as a group and did members of Anthony Piper’s Trill League, I’m sure my son would lose his mind. What I do wish to see are cosplayers doing more indie characters, because that is always a great thing. EcBACC goes very hard on that at their convention, so it’s always inspiring to see that.

BNP: What events are you looking forward to most inside MECCAcon?

Maia: Regine Sawyer (Eating Vampires, Lockett Down) will be honoring us by bringing Women In Comics NYC/International, so I am very much looking forward to that. We will also be having an indie film mini festival, curated by famed director Ka’Ramuu Kush. We also will be doing our first illustration contest. It’s so exciting to see the submissions being turned in for it. I’m just looking forward to it all this year, really. The DJ classes for the youth I know will be a pretty big deal, alone. DJ Sicari will be heading that division. 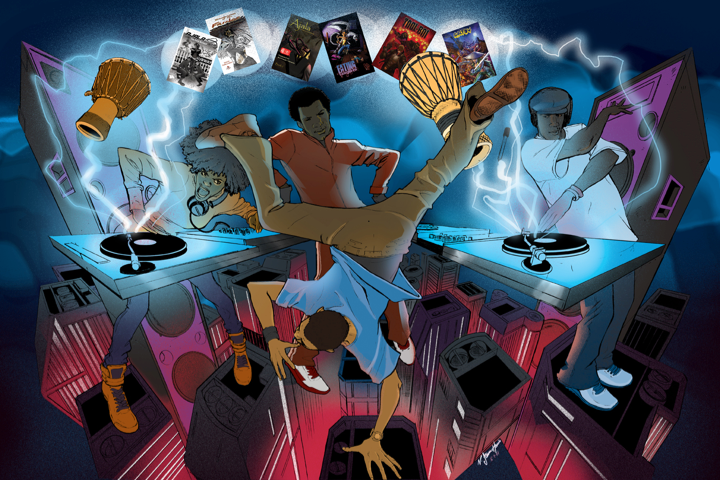 BNP: How do you feel about diverse representation in popular nerd media? Are you optimistic about the trends you see from mainstream publishers, or is your focus elsewhere?

Maia: I think that while the growth of diversity is great, I still believe we have miles to go. If you ask the average sista that reads comics who her favorite female comic book character is, 99% of the time, her answer will be Storm. It won’t be because she is her favorite; chances are Storm is the only one she knows. I know people who call themselves “comic book heads” but didn’t even know who Vixen was, let alone Misty Knight, so how can they know Aizan, Aje, or Ajala? As far as the mainstream publishers adding us more, that’s another whole interview for me to go there. I welcome and praise it, just as much as I laugh at it and shake my head. I’m more focused on developing my own community than painting someone else’s brown. I believe in us creating our own product, instead of making black and brown versions of white ones. Just my honest opinion. We needed Milestone to have resurgence. We also need 133art to further get their due. I love The Avengers just as much as the next, but I am more focused on investing in Almighty Street Team.

BNP: How do you measure success for a convention like MECCAcon? Counting the number of attendees? Creating a network for nerds who appreciate multicultural media? Offering a space to highlight creators of diverse characters? All or none of the above?

Maia: Ok, here is another cheesy but honest answer: I measure it by how hard these children smile when they walk in a venue filled with books that look like them. While I aim to create a medium to get the word of Black art, Black film, Black comics out to the masses, I get more inner strength knowing that lil Anton and lil Nia will be leaving with a book or poster that represents who they see in the mirror when they get back to the house. Attendance I care about because these artists invested their money and their time to participate, so I want it to be successful for them.


[divider type=”space_thin”]
BNP: Aside from attending the convention, how can people help?

BNP: What’s next after 2015? What are you biggest dreams for MECCAcon in the future?

Maia: My biggest dreams are to one day have it to where money isn’t an issue. That’s my goal right now. To be serious, my dream is for MECCAcon to showcase comics and art of all cultures equally. I want us to one day say that we are a prominent convention up here in the Midwest, and that people can’t wait to come next year. I want this to be a prominent fixture in the beautiful city of Detroit as a whole. I want Detroit to know that Black people are worthy of greatness, and no matter how much they try, we will not be pushed out. No matter how much you turn our water off.

Whether you’re new to conventions or a veteran on the scene, attend MECCAcon and be a part of something amazing. Interested in going the extra mile? Consider sponsorship and volunteering through their website. Tickets are available now for a crazy low price, so consider adding a donation as well. Artists looking to register for tables can do so here. Tell a friend, spread the word, and get excited: MECCAcon 2015 is coming.