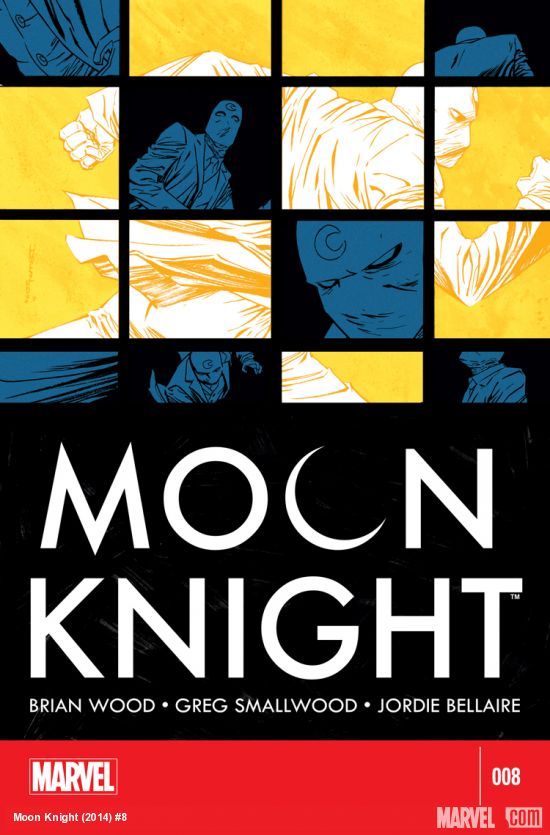 Maaaaaaaaaaaaaaaaaaaaaaaaaan Listen, this issue of Moon Knight gave me that life! That 1-Up! Good God! Brian Wood put his foot in the ass of this issue. Whereas last month I felt the issue was repetitive with Moon Knight dealing with a mercenary much like we saw in Warren Ellis’ early issues. Wood knocked me out with a sucker punch this time around. Wood is still keeping the theme as each issue being a different case however this time he adds a bit of an arc as we see seeds of the previous issue’s ending come into play.

This issue was major motion picture shit. We open up to a hostage situation at the towers in New York city. Officer Flint is buying time for Moon Knight to infiltrate the building, stop the threat and rescue the hostages. The beautiful thing about this issue is that each panel is shot form the perspective of a camera. Greg Smallwood makes you feel like you are watching shit happen on the news, then a camera phone, then police cameras etc, etc, with different details to each type of camera’s definition. Moon Knight also his own tech into play Scarab drones which act as his (and the reader’s) eyes through out the issue. 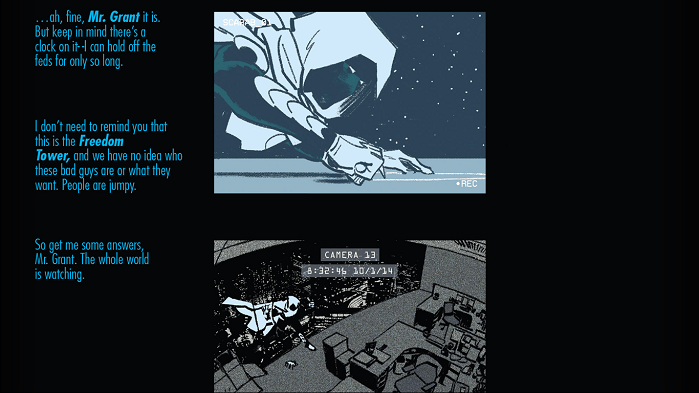 The real thrill of this issue isn’t even in the action in how Moon Knight takes down the man holding everyone hostage. The thrill is in the fact that as Moon Knight talks to the detective, he asks to be addressed by a different name every so often. For those of you that know that means Moon Knight’s Disassociative Identity Disorder (we use to think it was multiple personalities back in the day) seems to be coming into play heavy this issue. So much so that upon request of talking to his doctor Detective Flint informs Moon Knight he will be giving himself up as well. For those that don’t know Moon Knight’s doctor is the one who hired the mercenary from last issue that Moon Knight took down. Our hero now finds himself thrown UNDER THE BUS like he was asked to check out the muffler.

We find Moon Knight at the end of the issue realizing he was set up and sitting across from Khonshu (The Egyptian God of the Moon) telling Marc “Bruh…. You done stepped in some shit this time man”. This issue was the perfect follow up from last month and leaves me anxious to see how Brian Wood plans to tie it all in now that the apprehension of Moon Knight is the police’s main priority.