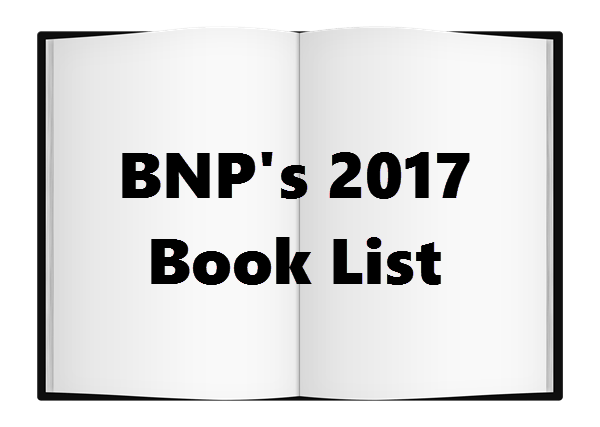 There is a problem common to all readers: the problem of the To Be Read List. When you finish a good book, how do you decide what’s next? Fiction or non-fiction? Fantasy or romance? Something new that just debuted or a book from 2 years ago that you’ve had sitting, waiting for you?

We know this pain. So to help you sort what’s coming up this year against what’s good from the past, here are the To Be Read lists of a few of our writers — books we’re looking forward to and and books we’re catching up on. The To Be Read List never gets shorter, but it should always get better.

I love the beginning of a brand new year. There is always so much to look forward to; new beginnings, the change of seasons and a reading list that seems to grow exponentially from winter to spring and then gets devoured in the summer months.
With that being said, here are just a few publications that I am eager to get my hands on in 2017. 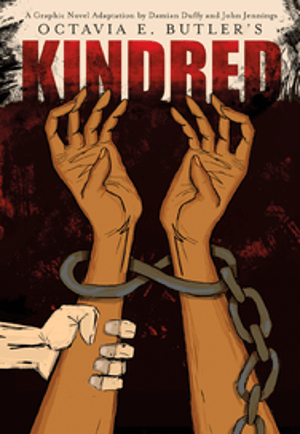 Kindred: A Graphic Novel Adaptation (originally written by Octavia E. Butler/adapted by Damian Duffy and John Jennings; Release date January 10, 2017)
I can’t really put into words my love for the writings of Octavia E. Butler. She is my all time favorite author, my introduction into science fiction, an inspiration. I first read Kindred early in college after I had devoured her Parable of the Sower series in high school. Kindred was a painful read. I had to put it down several times and I would reread paragraphs and chapters in disbelief. My mind raced with vivid images. I don’t want to give much of the actual story away in case you’ve never read it. All I know is that I’ve never wanted a graphic novel so badly. I just really hope it lives up to the crazy images in my mind and that this adaptation does the novel justice. Kindred: A Graphic Novel Adaptation is already a #1 best seller and may be available by the time you read this. 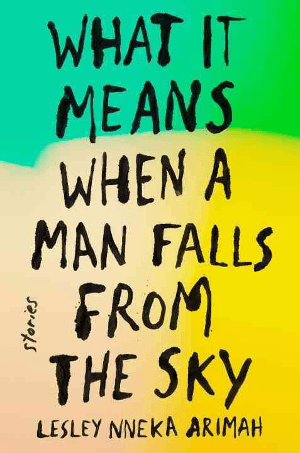 What It Means When A Man Falls From The Sky by Lesley Nneka Arimah (Release date, April 3, 2017)
Arimah is a new author to me. I stumbled upon her while looking up short story award winners. The UK-born, Nigerian writer released the original short story through Catapult in 2015 (it is still available for reading) and it seems that she turned some folks’ worlds upside down when she did. Magical realism, science fiction, mathematics to explain the world and give us human flight without the need of airplanes or technology, plus the ability to remove grief and pain… I can’t wait to devour this. The whole collection will be available in April. 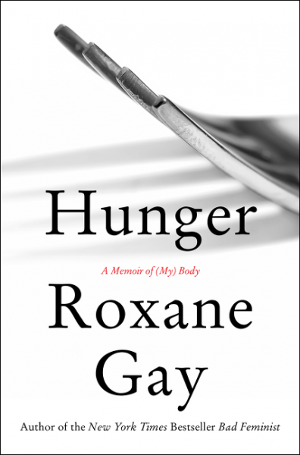 Hunger by Roxane Gay (Release date, June 13, 2017)
I became a bit obsessed with autobiographies in 2016. Mainly those of women of color who look a lot like me. Hearing successful women speak openly and freely about their bodies and the images of themselves that they have in a male-dominated society is often empowering for me. It’s a side of representation that I think I had always craved when I was younger. Roxane Gay depicts her sexual abuse, her weight, her writing and much more in this forthcoming book. The more of her essays I read, the more I see myself and the self I keep in these dark corners. Stories like this, from real people, help us to come out of those shadows. I’m looking forward to that; reading this and pulling myself further into the light. 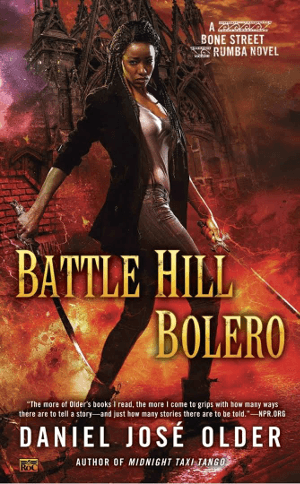 Battle Hill Bolero by Daniel José Older (Released January 3, 2017)
The final book in Older’s Bone Street Rumba series dropped at midnight on January 3rd and we already in this bitch! I fell in love with Carlos Delacruz and his crew of dead, half-dead, and fully living badasses in Half Resurrection Blues and devoured book two, Midnight Taxi Tango, and the short story collection Salsa Nocturna. Some of the stories set us up for a powerhouse finale: an uprising, a revolution, a war. “Protected Entity” especially had me all the way up in my militant Black woman feelings (you can read the story here). Look, full disclosure, I already finished this book and it seriously delivers on all of its promises.

Shadowhouse Fall by Daniel José Older (Release date, September 12, 2017)
The second book on my watchlist from Daniel José Older (what can I say, that boy good!) and the upcoming sequel to his award-winning YA debut Shadowshaper. After Older’s Beyoncé drop of the novella Ghost Girl in the Corner (dedicated to Black girls everywhere) I’m so ready to spend more quality time with my Brooklyn babies (I love them so much *sobs in representation matters*). Just have to wait for an eternity, AKA September 12th. Sierra Santiago is my sweet, adorable, ass-kicking child and I cannot wait to see more of her adventures. 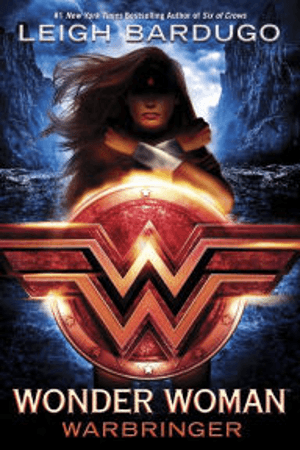 Wonder Woman: Warbringer by Leigh Bardugo (Release date, August, 2017)
So y’all know we love Wonder Woman round these parts. But did y’all know there’s a Wonder Woman YA novel dropping at the end of August?? No? Well now you do so you’re welcome. If you want to reserve me a copy in gratitude, I’ll gladly accept. The trouble in Wonder Woman: Warbringer starts when Diana rescues Alia Keralis, descendent of Helen of Troy and the warbringer of the title. Little known fact, the first third of my graduate dissertation is about Helen of Troy so between that, my inner Greek mythology fan, and my overt Wonder Woman stanning I’m beyond ready! August is so faaaaaar. 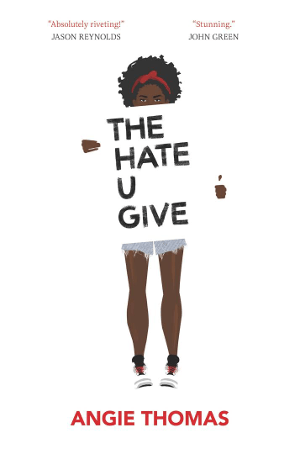 The Hate U Give by Angie Thomas (Release date, February 28, 2017)
This is the only non-fantasy book on my list so far, the second to drop, and all set to become a film. Inspired by the Black Lives Matter movement, The Hate U Give follows Starr Carter and how her life is upended when she witnesses her best friend’s murder at the hands of the police. I’m not expecting this to be an emotionally easy read because my own feelings about extrajudicial executions are still a gnarled and tangled ball of pain. But books have always lent a way to untie life’s Gordian knots, and I’m ready to sit down with this one. You can pre-order direct from Angie Thomas’ website. 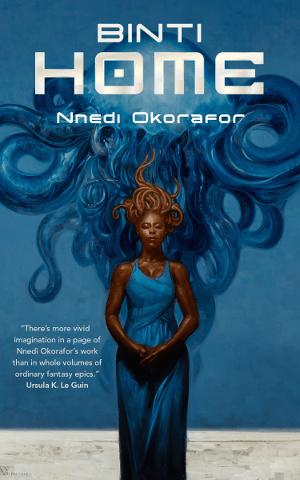 Binti: Home by Nnedi Okorafor (Release date, January 31, 2017)
Last year’s stand out novella, it won both a Nebula and a Hugo award, was Binti by Nnedi Okorafor. One aspect of the beauty of that work was the strong world building rooted in a futuristic African people — it was done with few, well chosen words that were so evocative. The follow up novel, Binti: Home is coming out at the end of January and I can’t wait to read it. Binti: Home reverses the journey of the original, with Binti returning home with the alien Okwu to face the consequences of her decisions. I’m hoping to learn more about the people that Binti calls family and about the alien Meduse that she now calls friend. Look for this one January 31 through all your favorite book outlets. 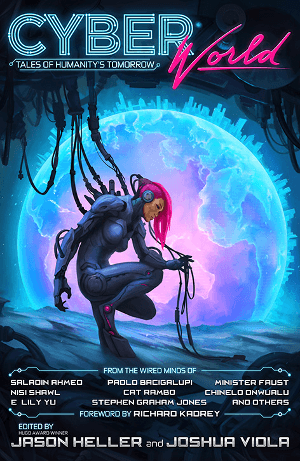 Cyber World: Tales of Humanity’s Tomorrow (Anthology; Released November 2016)
My first love is cyberpunk — it is the only sci-fi genre that I buy off the strength of the theme alone, and about the only fiction by white authors that I still read. So when my fave Saladin Ahmed (who’s writing an upcoming Marvel comic on Black Bolt) mentioned that he was in the cyberpunk anthology Cyber World: Tales of Humanity’s Tomorrow I bought it with no hesitations. Also in the ToC are Alyssa Wong (winner of a Nebula award in 2015) and Nisi Shawl (who’s amazingly deep novel Everfair continues to haunt my Kindle). This promises to be a great addition to the genre and should feed my cyber needs long into Spring. The book released in September, so I’m playing catch up on this one. 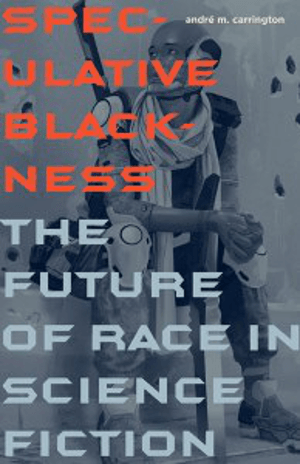 Speculative Blackness by Andre` M. Carrington (Released February 2016)
Lastly, some non-fiction. The field of Black Spec Fic writers is so wide that it helps me to have some grounding in the thinking about the genre when writing critically about it’s future. To that end, I’m working my way through Speculative Blackness by Andre M. Carrington. A scholarly work, it explores 4 iconic moments of Black identity in the majority White writerly imagination. He unpacks Carl Brandon (the Black fan writer who never existed), Uhura and Nichelle Nichols’ experiences playing her, and so much more. It is a challenging read, but one I’m enjoying. It promises to keep me thinking long into 2017.

What are you reading from last year? And what’s locked and loaded to start the new one? Let us know. We’re always sharing recommendations on our Twitter feed and here on the site.