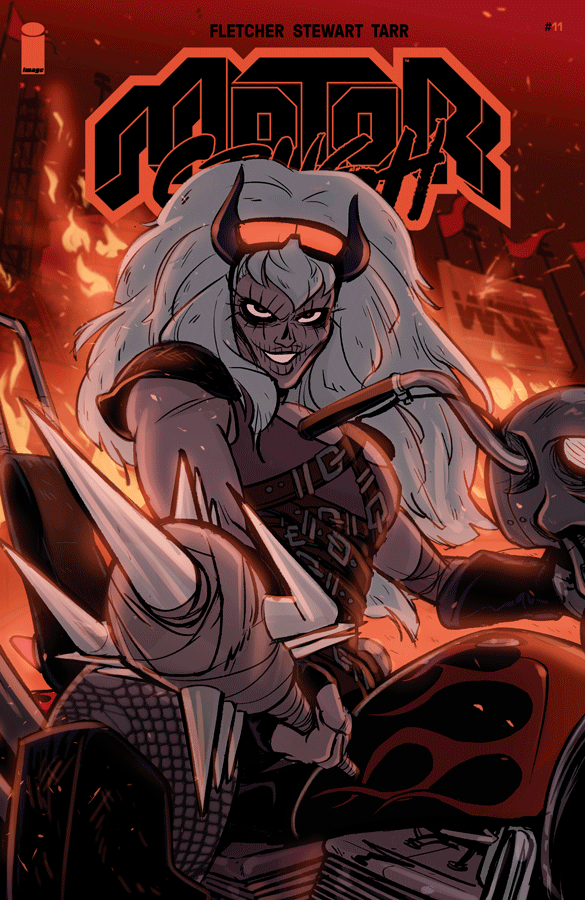 Whatever your expectations were for Motor Crush #11, you weren’t expecting all this. After officially revealing the identity of the Dark Rider, this series largely skips Decimus-focused exposition for the second issue in a row and instead looks elsewhere, this time focusing on Domino’s best racing friend Ya-Ya. That’s the adventure of the day, at least — the real weight of the issue comes from Domino’s relationship with Lola that accelerates surprisingly fast and almost out of nowhere given the context of everything going on. I would’ve expected this to be a series-long burn as Domino and Lola find their way back to each other but this is all the better, taking the “will they love each other” question off the table in service of a larger conflict. And by the end of this issue, the larger picture is revealed when Decimus finally gives the exposition that he was owed, the one we had nearly forgotten.

The mastery of this issue is one that we’ve come to expect, use the short-term plot to lead the action and adventure while the bigger plot builds. This issue does a great job at being light and fun with a lot of silly moments, and then drive home the emotion just when you think it’s all fun and games.

We’ve been on this ride for a little while now and it’s great to take a step back and look how far we’ve come. This series has built quite a world and a lot has happened in eleven issues — from time travel to a great supporting cast — with its latest turn it feels we’re just getting started. And if that’s the case and we’re barely out of the Chunin Exams we should be nothing but happy about getting in on the ground floor of a long haul, because Motor Crush is an awesome ride.