We open up with the hottest hero in the game after FINALLY proving his status as the front runner to take the number 1 spot. My guy Mirio Togata aka God Son aka Zap My Powers And I’ll Still Hit You With The Rock Lee Work aka Lemillion da GAWD all poked up and bloodied like filet mignon shish kebab. Eri behind the homie quivering in fear after Mirio laid it all on the line. Overhaul about to fade the Permeation prince, and just when Shang Tsung yells out “FINISH HIM!” our boy Midoriya busts through the wall like the Kool Aid man and saves Togata Senpai right before the final blow.

Mimic gettin put in custody but that doesn’t stop him from being salty as the Dead Sea. He mad as hell at the League of Villains, but really it’s just Twice and Toga, for betraying the Yakuza. His anger gives away all the info that they aint really blending like that.

The Student Becomes The Teacher

All these heroes standing around debating how dangerous it would be if the League was lurking in the shadows ready to pounce on them while Rock Lock is on the ground lookin like Jean Grey on every mission. He asked these fools “WHAT ARE WE EVEN DOING” and tells them to get their asses back on the trail of the villains! He stays behind and restrains Joi Irinaka because Toga sliced him up too much to do anything but lock somebody in place and writhe in pain.

Sidebar: This is the man every Manga reader was hype to see in the anime? Why? Because he’s a POC in a popular show? I hope he shows us something dope soon…

While Aizawa and them get back to completing their mission, Rock Lock recalls exactly how much of a hater he was when he found out kids were going to be involved in this Yakuza takedown. And look at them now, stuntin on ayebody they come across! 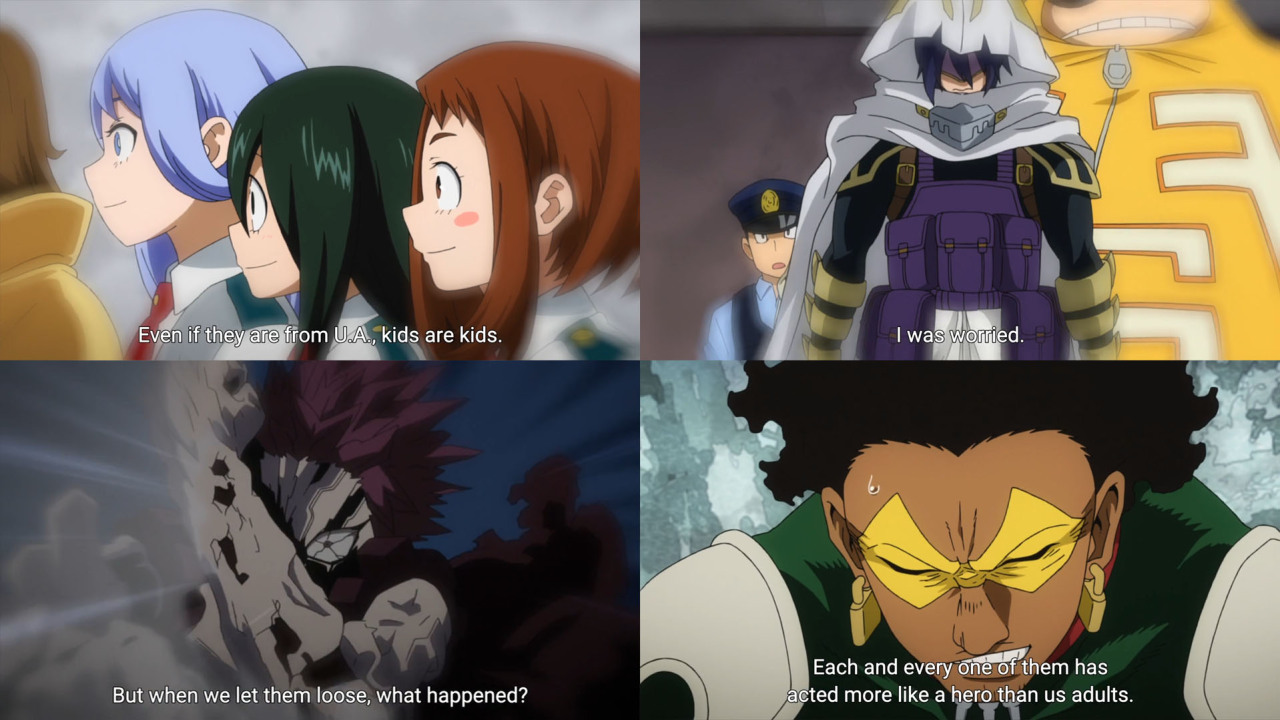 Oh, and whats this? A little Rock Lock flashback comparing his concern for the UA students to his adorable dark skinned baby being held by his very white wife? Let’s not even go there…Yikes Forever.

Toga and Twice are busy crawling through tight spaces like the start of the Facility level on Goldeneye. Toga talkin’ reckless cuz all she wants to do it make Overhaul cry. They’re in the cut watching the heroes running to Mirio’s rescue. They’ve chosen the “Wait until they wear each other out” strategy, and honestly, I ain’t even mad at the art of war tactics.

Deku breaks into that room with his Vibranium Timbs and cracks Overaul’s forearm with the mean right hook and Sir Nighteye surveys the scene.

Two of Chisaki’s boys are down, Overhaul got knocked back by Deku’s blow, the room is all warped from Overhaul’s battle with..OH. Oh NO. Sir Nighteye finally sets his eyes on the young champion standing on his last legs and consoles him like only a proud father figure can.

Overhaul got his power erased by Aizawa and hates being touched so with that punch from Midorya and no abilities, he turned this shit into Iran drone strike war zone. He told his boy Chronostasis to wake the hell up and put some work in, resulting in Erasurehead getting sliced by his slow mo hand of time attack and Overhaul getting his juice back.

The villain goes Chernobyl on the whole dam room to stop Deku’s attack, forcing Nighteye to retreat with his protege and Erasure to get dropped down to some secret room with Chrono who reveals that Eri is the Shei Hassaikai boss’ granddaughter and that they got plans for his quirk. These dudes giving away all the info. Overhaul’s unconscious boy lands at his feet only to be absorbed by his boss, like Cell slurpin down Android 17. Then he turns into Goro.

Overhaul starts talkin that shit and let’s it be known that he took Lemillion’s power away resulting in a Deku and Nighteye recoiling in anger and confusion. Deku avoids Overhaul’s next attack before Nighteye takes over to punish this boy for taking joy in removing quirks.

Nighteye might have swore to never read someones full future again, but he is down to use his 1 second fortune teller power to get the upper hand in this battle. He’s out her bobbin and weaving, having flashbacks about All Might when he gets hit with the surprise stone acupuncture. in his final moments he looks for the future that he and Mirio want to see but it’s not looking good.

Deku, always the reactionary Shonen protagonist  of our dreams, rushed right in after seeing him get skewered and goes up to 20% full power. He impresses Overhaul but it’s just fueling his desire to beat that ass. Midoriya’s movements were wild stale and he read them shits like a open book, resulting in another body on a stone spire.

We end the episode with Eri succumbing to her guilt and returning to Overhaul in exchange for him putting everyone back to the way they were. Overhaul’s boasting and constant villainous trash talk has Deku fuming. This man rips the stone shards out of his body and promises he wont let anyone die! The roof cracks open, the Dragoon hero and others come flying in and we’re left off with another cliffhanger!

Such an excellent episode. I’m literally googling My Hero things so cautiously it’s not even funny. Will Lemillion ever get his powers back or become relegated to taijutsu? Absolutely love the Mirio and Midoriya parallels that have become so apparent this season.

Enjoying My Hero Academia? Check out BNP’s recaps of the rest of the season here.