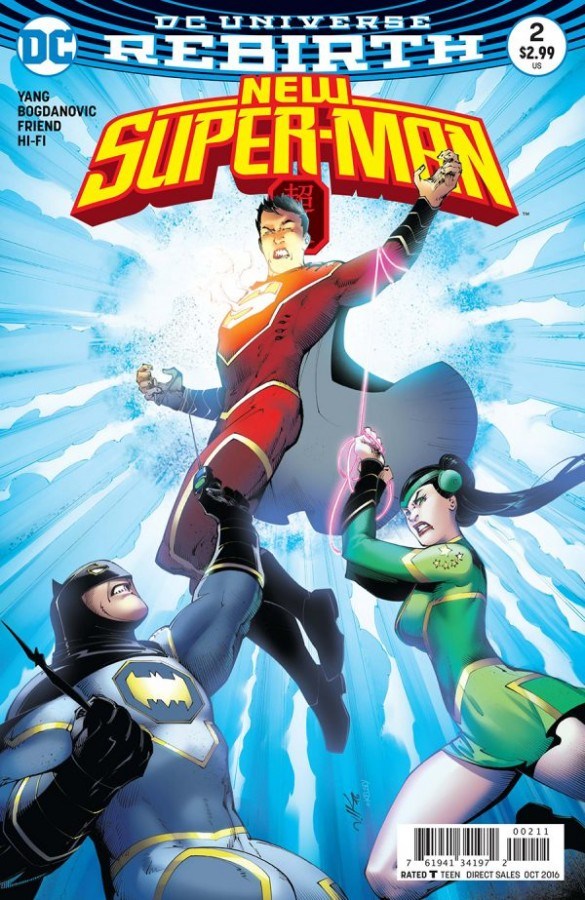 All right, all right, I’ll admit it: Kenan has grown on me since last issue. Of course, it helps when this issue is filled more with the spectacular skills of the Justice League of China and a little less of his whiny self-importance and bullying this time around.

And how to feel about the Justice League of China? Well, Gene Luen Yang certainly wastes no time in lampshading by having Dr. Omen declare the group of heroes a “new league for a new era,” so you can’t complain that he didn’t do the research. Yet Wonder-Woman and Bat-Man are a little hit or miss for me; one moment they work wonderfully in tandem, Wonder-Woman’s lasso and shield strikingly different than her American counterpart but still impressive while Bat-Man seems to be a fairly standard carbon copy, the next their personalities feel a little dry and flat.

It might be because we have no idea of their backstory or even their age (the duo appears to be a little older than Kenan), but the sarcastic barbs flung by either hero can sometimes feel unnecessarily harsh given their status as what I assume would be mentors to a fledgling superhero. Where Kenan’s personality is in sharp contrast to Clark’s and therefore makes sense to be erratic, self-centered, and occasionally outright violent, the other members of the League aren’t quite fleshed out enough to determine either way.

The story doesn’t really seem to hit its stride until the last third of the book, which might be because there’s so much exposition and explanation for every action characters take, although rather than information you feel like they have even more questions than before. I’m also a person that values character development and relatability over quick pacing or even in some cases originality of story, however, so the panel to panel action might be more preferable to another reader’s palate. I’m less concerned with pages of Dr. Omen and company talking down to Kenan than the moments when he has to face difficult decisions and grow as a person, although I see how these work as attempts to paint Kenan as the underdog. Between his complicated family life, repressed emotions, and spontaneous boldness, however, I doubt we need more reasons to feel sorry for our young protagonist. 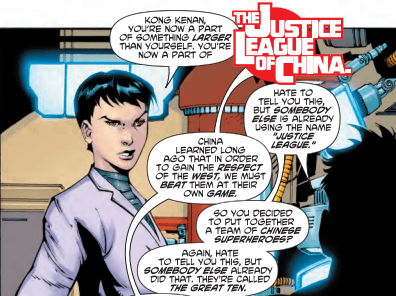 To conclude, New Super-Man isn’t quite sure how seriously to take itself yet; right now it can sometimes read a little closer to a Marvel parody of DC characters rather than DC property itself. Because the series has to concentrate on introducing brand new characters with ties to the Trinity, justify its existence as a story, and build a setting that previously has been mishandled in comics, I think there’s incredible pressure put on pacing that prevents the reader from really getting immersed in Kenan’s world. It’s a decent read for now, but not the must-have I still hope it can evolve into.

8.9 electric visors out of 10
Are you following Black Nerd Problems on Twitter, Facebook, Tumblr or Google+?
2 Shares