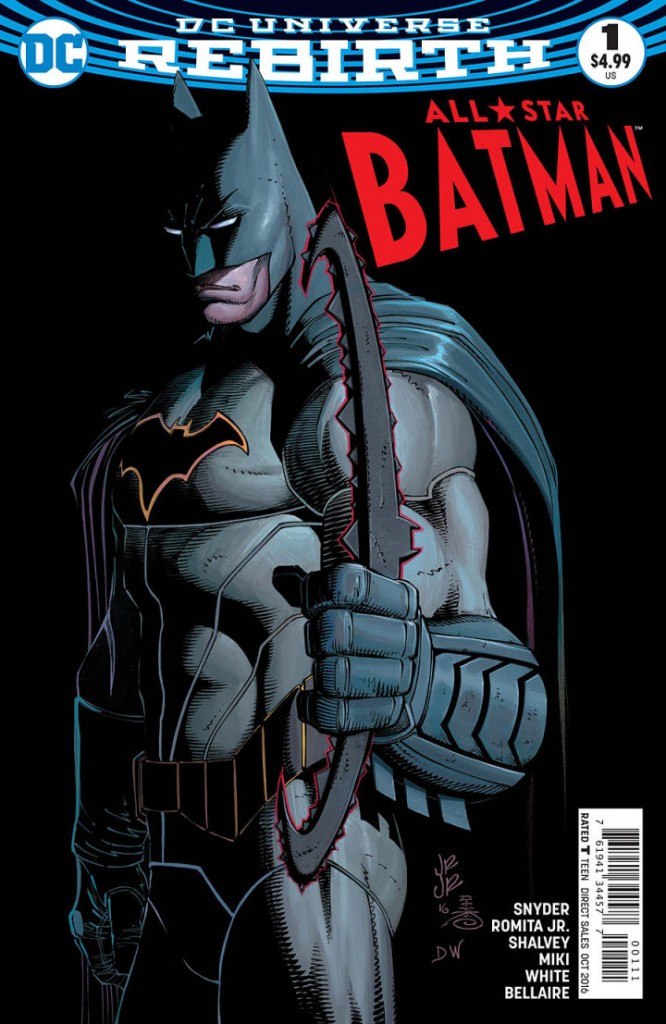 If you’ve kept up with BNP long enough, you know we were huge fans of Scott Snyder’s Batman run. With mind bending, infinitely fun story arcs like “Court of Owls” and “Zero Year” Snyder turned the Bat-mythos on its ear and changed the game for years to come. Although the Batman torch has officially been passed onto Tom King, the “Death of the Family” writer has a few more good Bat-stories left to tell. The result is All Star Batman.

The first issue of this ambitious venture opens up strong with on-the-run elements of Smokey the Bandit and 16 Blocks. Batman embarks with a captive Two Face on what must be the worst road trip of all time, on the run from…well, everyone. Snyder is at his best when his Batman stories hit the ground running and this fact remains truer than ever with “All Star.” Snyder starts off smacking you in the face with smart, fast paced action beats and asks questions later. There’s a slight twist towards the end that might leave a few raised eyebrows in its wake, but there’s room for mystery, being the first issue and all.

Also, the bonus story is a compelling insight into Batman’s latest protege, Duke Thomas, and the possibilities of his role in the Bat-family. On the visual side of things, John Romita Jr. is a divisive artist among fans but he is spot on with his pencils this time around. His action beats are clean and kinetic, tight pacing while poses remain loose enough to stay fun. Meanwhile, Declan Shalvey’s work on the “Cursed Wheel” story is absolutely inspired. His Batman feels less like a muscled powerhouse so common in modern franchise lore and more like a stealthy, fluid figure of agility. Thanks to Jordie Bellaire’s inks, the visuals prove to be effectively atmospheric while in line with the colorfulness we’ve come to expect because of Snyder’s work with Greg Capullo.

Bottom Line: Heavy on action, moderate on exposition….Snyder comes right out of the gate with a promising opening to what looks to be a solid series.