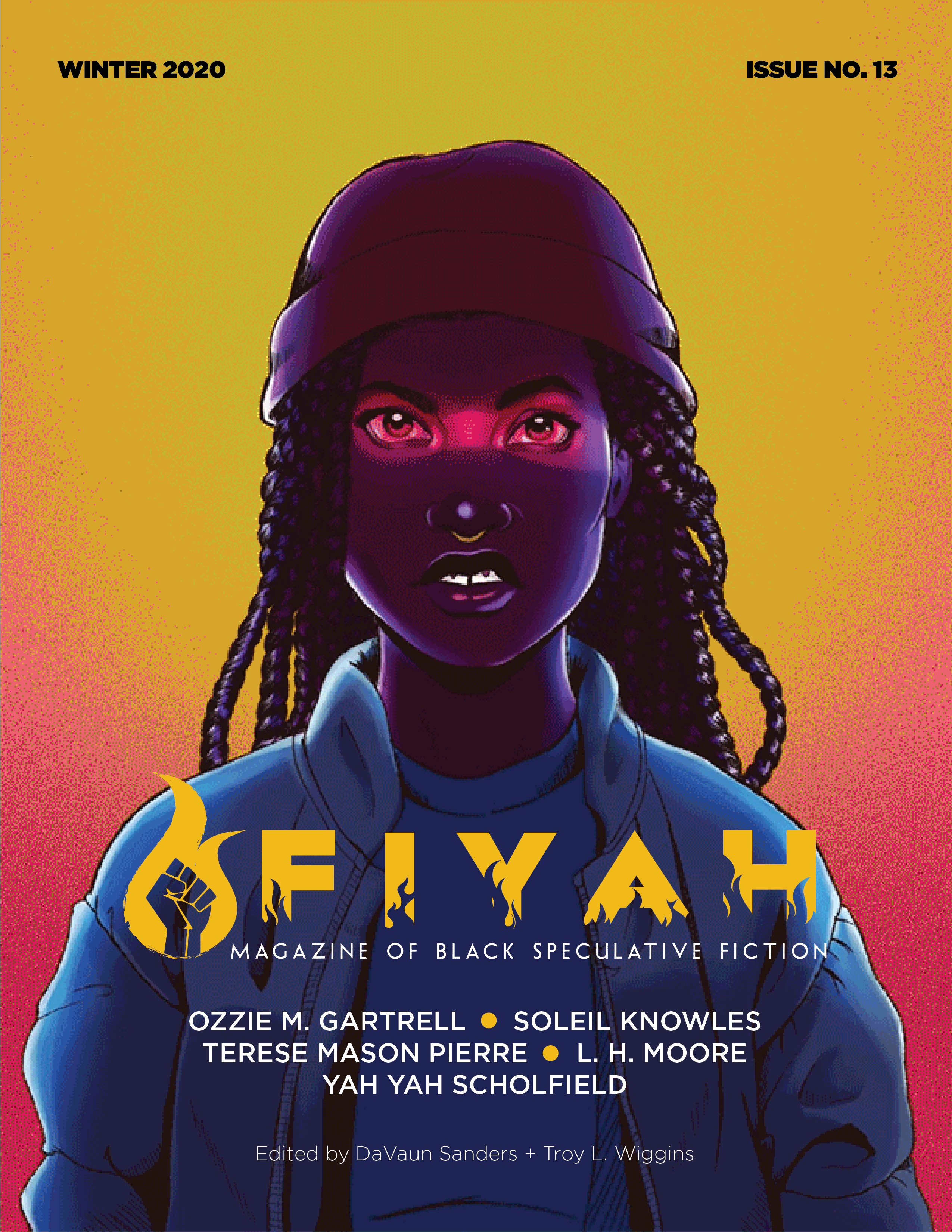 Three years ago Fiyah Literary Magazine emerged into the speculative fiction field with a straight-forward premise: to publish speculative short stories, novellas, and poems by and about Black people of the African Diaspora.

They have had a startling start. In their first year, they won the World Fantasy Award in the non-pro category. Since then, cover to cover, Fiyah has shaken the white world of sci fi, fantasy, and horror, appearing on Must Read and Awards lists around the world. They’ve introduced us to fantastic writers and served as the entry point for readers who felt excluded from other stories.

Fiyah demonstrates what we, Black readers, already knew — exclusion of Black writers from mainstream outlets was not based on our merit but on racism and cultural imperialism. While other magazines and journals scramble to update their submissions guidelines and invite more Black authors, Fiyah continues to put out the fresh, new science fiction and fantasy that I love. Here at the beginning of their 4th year, it is time to revisit the latest issue, #13. Does it still bang? You know it does.

Issue #13 isn’t centered around a theme. The themes that have been chosen in the past have set the tone not only for each issue, but for the direction of Fiyah in general. “Big Mama Nature” or “Ahistorical Blackness”, for example, introduces the reader to a whole new way of organizing sci-fi, fantasy, and horror around the wide variety of Black experiences, religions, and pasts. In this case, while there is no theme, two of the stories would easily have fit into an Ocean or Water Goddess issue. “All That The Storm Took” by Yah Yah Scholfield tells a post-Katrina tale of two sisters who sacrifice everything for the family home in the lower Ninth.

Scholfield is a young writer, 20 years old, who weaves a solid monster tale, where the monster is memory and death and the storm itself. It is magical and haunting. Soleil Knowles writes another water story, “Lusca”. I didn’t know that Lusca is the name of a sea monster that prowls the Caribbean, part mermaid, part octopus, all hunger. Knowles’ telling is very much about that hunger, and how it affects a young woman who’s mother is trying to separate her from the sea, to no avail. This is a perfect example of what’s possible in fantasy when all mythology is in play, not just re-treads of Greek or Irish myths. I enjoyed “Lusca” overall, but would have liked there to be more to it. The story gets lost in it’s own language, which is beautiful, but also as tangled as seaweed.

The third short story, “Roots on Ya” is similarly short, and reads like a personal family story. A rootworker is called to clean up a crossing spell cast on a romantic rival. LH Moore tells the story perfectly, filling it with the right balance of Virginia dialect to make the location stand out. This is a story about the culture of the time as much as it is about the heroic rootworker, who is outcast by the community while also being a sought after resource. I wish it were longer, however, and explored more of the growth of the characters. As it is, “Roots on Ya” is a snapshot of a moment, rather than an arc of development.

By far the longest story in Fiyah Issue #13, “The Transition of Osoosi” is about a young revolutionary, Mal, trying to liberate his people in America. Mal is a Citizen American, a codified second-class of American category into which all Black and Native Americans are placed. They are are the mercy of True Americans, white people. This is, in many ways, our current reality dialed up to the maximum in the way of so much good cyberpunk. The story is filled with augmented reality, neural chips, and projected emotion webs. That technology layer is fascinating world-building.

Alongside that is a deeply human story of Mal, his sister, and his friends, as they all persevere under the ever-watching eyes of the country of their birth. Mal is trying to contact the government of United Africa, a Wakanda-like African country that is open to the possibility of supporting the fight for liberation. But the price for their support is high. This story casts United Africa as saviors surely, but also as problematic as any other organization that demands everything.

Gartrell pulls together a story that crosses both Native American history and West African mythology, giving room and strength to both. In doing so, it also has plenty of American pop culture thrown in, to make a narrative that felt representative of a multiracial American experience. And what does Mal “transition” into? Here a bit of West African cultural knowledge will serve you well. I enjoyed “The Transition of Osoosi” beginning to end and would gladly follow an entire novel of Mal’s adventures in the techno-dystopia. As it is, this short story is enough to hook me entirely.

I continue to recommend Fiyah Literary Magazine to anyone who asks. Every story is unique, introducing characters and situations that feel intimately familiar as well as new ideas and mythologies that send me researching to Google.com. The variety of the diaspora is on display in these pages — and this display is making an impact on the mainstream. More literary magazines are updating their submissions guidelines and recruiting Black authors. But Fiyah remains the best.

Pick up Fiyah #13 direct from their website, https://www.fiyahlitmag.com/. A subscription is a great deal that will keep you full of the best Black Gods, Black Monsters, and Black Aliens all year long. See more of FIYAH online on Twitter, Facebook, and Pinterest.

See more of our site’s other literature reviews here. Look for more reading material on our Bookstagram account on Instagram.