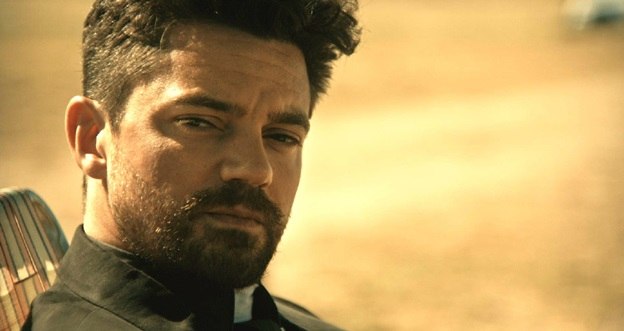 A day I’ll always remember. I was wearing a wee plaid pinafore and a huge smile when I walked into church that morning due to my mother finally granting me permission to bring my very favorite stuffed animal (it was a huge cloth and plastic Baby Smurf, if I’m being specific) to Sunday School. Normally she would never let me bring my toys out of the house, but that day? That day was special. I could barely contain my joy as I walked into the classroom, that is until I heard five words that would follow me around for the next 28 years.

My mother, bless her heart, is the type of woman who wouldn’t let my brother and I watch The Box (because Luke/2 Live Crew videos) but who would buy us long boxes of random comic books to read sans supervision. It was inside one of those rando boxes that I found issue #1 of Preacher. Andy, our comic book supplier, stuck it in with my Mother’s pulls because he knew she had a thing for Sandman and all things Vertigo. She, not knowing the sheer amount of trill badassery inside, passed it my way. For many years, it was one of my little secrets, a barometer I used when determining what kind of comic book geek I was engaging at any moment. I was fine with that, too, until someone at AMC decided that fooling around with The Walking Dead just wasn’t good enough. Ugh.

First of all? YASSSSSS for the casting of a WOC for this role! Tulip was originally illustrated as a white woman with an awful early 90’s blonde bowl cut, so this casting is indeed a welcome change. Negga, who you may recognize from her recurring role as Raina on ABC’s Agents Of S.H.I.E.L.D. (as well as from Misfits as Nikki *thug tear*), was the first person cast, a decision made before they even were sold on Preacher himself, Dominic Cooper.

Speaking of Misfits, though…

Now please note, these props are for the casting choice, not the appearance of said character in the trailer. Having watched Gilgun in Misfits,  I think he’ll slay the role, although you’ll see in a minute that I have both questions and concerns, dammit.

I sincerely doubt that AMC will even try to put all of the gory, perverted, bad acid trip content of the comics into the the television adaptation, and that’s okay with me. Some of Herr Starr’s perversions, kinks, and exploits should never be seen outside of the darkest corners of the internet (and that one place in New York), and between Game of Thrones and the American Horror Story series, there isn’t exactly a shortage of depictions of brutal violence and sexual assault on TV nowadays. Again, those panels won’t be missed by most of us. What the trailer does show in tiny glimpses is a certain level of hyper violence that the comic had in spades. I know AMC will go as far as it can, and if they aren’t afraid to go full blasphemy we might be on to something here.

Okay, so technically this one is cheating as Arseface isn’t even in the trailer. Still, the fact that he’s been cast gives me hope, plus rumor has it he’s introduced in the very first episode. He’s one of the characters that you can’t do away with and still call this an adaptation.

Now, here are the things that I’m worried about:
[title type=”h4″]1) Cassidy[/title]

Okay, so Proinsias Cassidy is not only a damn near 100-year old Irish Vampire, but he’s a drug addict and alcoholic. “Hard partying” doesn’t even begin to cover it. He should be pale, scrawny, and pretty wretched looking. Trailer Cassidy looks too healthy to have the rat blood sucking, waifish, “I’ll suck your d*** for a hit” quality that comic book fans know him to have. Gilgun can take it there if they let him, but from what we see of him in this trailer? They aren’t letting him. Also?

Cassidy should always, ALWAYS wear his sunglasses. That’s such an important part of the character that this series is already losing major points for the blunder. There will be no getting around it. Major mistake is major.

The trailer doesn’t even remotely set the tone for the kind of irreverent shit show Preacher is known for being. The titular character, Jesse Custer, starts out as a small town reverend whose soul becomes fused with the spawn of an angel and demon named Genesis. When that fusion occurs he accidentally snuffs out his entire congregation. He also gains The Voice of God, a power that allows him, when he wills it, to command the obedience of anyone who hears and understands what he is saying. Custer is kind of an asshole, at one point he uses The Voice to force a would-be kidnapper to count grains of sand on the beach until he reaches three million. Anyway, there is no hint of this power in the trailer, which makes me worry that TPTB are either cutting that part out or minimizing it’s importance. Neither of those changes will make me too happy.
[title type=”h4″]3) Vague trailer was vague[/title]

A violent white guy with a dark past meets a wacky Irish guy in a jail cell. That’s it. That’s all we get from the trailer. Nothing about Cassidy being a vampire, nothing about Custer potentially being more powerful than God himself, and nothing about any of the badasses that they meet along their journey to find God and make him pay for abandoning heaven. Folks who aren’t familiar with the comic book have no idea what they’re in for… unless folks who read the comic book are the ones in for surprising disappointment after disappointment.

Listen, I’m going to watch Preacher because if everyone is going to be talking about one of my favorite things, I need to be able to chime in and tell them that everything they love about it is wrong. Do I have high hopes that it will be a good show? Sure I do. Do I think that it will even remotely capture that glorious WTF-ness of the comic? No. Not at all. Because it can’t. Don’t believe me? Don’t take my word for it… try reading a few issues.