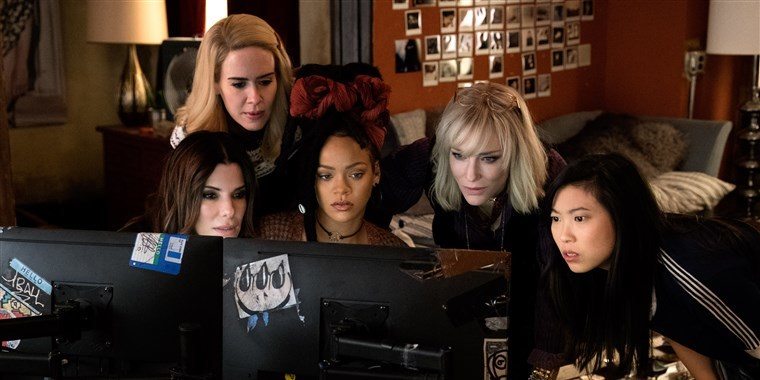 Who doesn’t love a good heist movie – especially of the Ocean’s brand? Sandra Bullock and Cate Blanchett make this one their own. Don’t worry, I will keep the spoilers away because Ocean’s movies are all about the plan: the twists and turns and the ‘how do they pull it off’? So I’m not gonna tell you, because I highly recommend you watch. This film is captivating and just as entertaining as the trailer puts forth.

What can’t Cate Blanchett do? I’m always in awe of her and she plays the American version of herself so well. She is the Brad Pitt of the bunch if you need to compare, which I don’t think you do. The Ocean’s movies have a brand; a formula, a character list to fill, and they do it well in all of them. I only wish the women had done it first so I’d be saying Brad Pitt is the Cate Blanchett of the story.

The film plugs the characters into the formula, produces the Ocean’s equation and voila -success! In no way does this make the movie less in quality or panache, the cast alone makes it of a noteworthy caliber. This is a clever, character-driven heist flick of enticing proportions. It makes lavish moves while paying homage to the first films in its series, and can stand alone no question.

The story stars Debbie Ocean, sister to Danny Ocean of the Ocean’s 11-13 flicks. This is where we get a glimpse of burglary being all in the family. They are all criminal, thieving masterminds, who have done some time.

They definitely pay homage to the saga of the films. I had a moment after they referred to Danny Ocean a few times and thought ‘I don’t remember him mentioning a sister…’ Of course, that’s all semantics, no way they knew all those years ago – “you know what, I’m pretty sure they’re gonna make a lady version, let’s talk about a sister.” Not everything can be foreshadowed like in the MCU.

That said, the characters are what drive these movies. You just want to see each specialist doing their thing and these characters are a delight. Watch out Shuri, “9-Ball” (Rihanna) might hack the Wakanda systems to steal that vibranium -she already has an in with Nakia (Lupita). It is always the best to see smart and skilled POCs on the screen. Even if they are thieving, you know what? Better if they are thieving from the man! Truly this is a girl gang for the gods: Sarah Paulson one of my absolute favs playing the Matt Damon front-face to the plan, Awkwafina being the kitty soft paws, Sandra the mastermind, Cate Blanchett the shyster, Mindy Kaling the jewel expert. It was great fun.

For it being an all-women Ocean’s movie you could say the film played to certain stereotypes with the mark location being the Met Gala and fashion and jewels being the target, but – F that. I loved the fashion, the style and the thought process that went into the costumes, and the whole Met Gala was perfect. Director Gary Ross explained how each actor had creative input on what they would be wearing in the Gala event scene, consulting their personal stylists ‘n whatnot. Even more, the hired costume designer dropped out last minute and costume designer Sarah Edwards swooped in and dressed EVERYONE in just 3 weeks, remarkable. I, for one, love a good Gala affair. Yeah, I am one of those ladies who doesn’t wear more than half an inch of heel, but invite me to a fancy party and you’ll see me in scaffolding-worthy heels and a dress to drape the Gods. So in the end, the gals made the jewelry heist Gala extravaganza so savvy and brilliant. 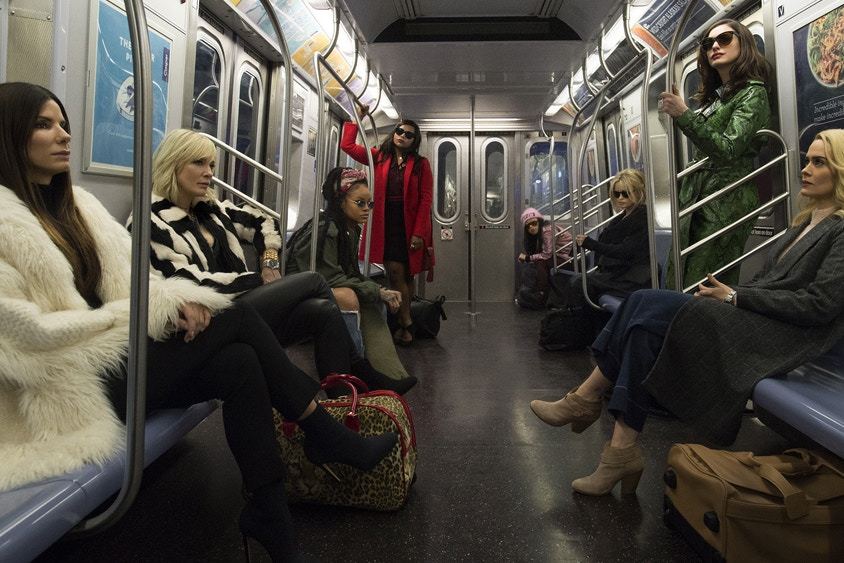 The film takes you on a journey through the premeditated crime heist that Debbie Ocean has been rotting for the 5 years she sat in jail. She knows to bring in her partner-in-crime Lou (Cate Blanchett) to get the job done. Of course, it has to do with some revenge against a man who did her dirty, but he really did her dirty and I’m about a revenge plan that involves intricate robbery and well-oiled con teams. Debbie does what she is good at and does it with the utmost style. Not to mention that thing Ocean’s movies do where one of them is always eating food?

The only Black Nerd Problem I felt was for the characters of color, Rihana and Awkwafina. There was an initial mistrust of their skills and abilities. It wasn’t just “oh we’re bringing in this dope hacker”, and done. I may be splitting hairs about a moment of distrust and second-guessing for both Awkwafina and Rihanna’s characters, but Sarah Paulson’s character gets brought on no question. To be fair, Mindy Kaling’s character gets brought on no questions asked…. So there you go, 1 for 3.

The two musical artists Rihanna and Awkwafina definitely hold their own on the screen with experienced actors. I mean, half the cast has Oscars and Emmys – I can only imagine the expectation. Awkwafina brought great comedic flare to the movie and Rihanna just, you know… being cool calm, ‘the shit’ Rihanna, controlling security systems from a food truck.

We are all thinking, is it just a girls version of a movie we’ve seen time and time again…another Ghostbusters? Yes – it is an all-lady Ocean film, but it truly is its own film. You can call it a spin-off, you can call it a version, it does bring new energy and revitalize this franchise we enjoy. I am excited to watch this side of the franchise play out. I would have been really mad if a movie starring Cate Blanchett and Sandra Bullock sucked… it would have been such a wasted opportunity. 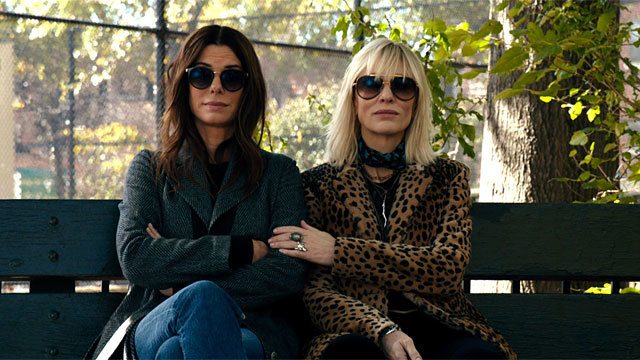 We get the glitz, glam, smarts and savvy that make an Ocean’s film. I am down for the representation for POC it brings, and of course in the women’s arena. It checks boxes and has me saying, “I’m listening…” It is not obvious in the film that this will continue for more films to come, BUT it only makes sense that this band of tricksters will be back for more. I highly recommend seeing Oceans 8 when it comes out in theaters this Friday. Go with your best badass girlfriends and a good martini, you will not be disappointed.