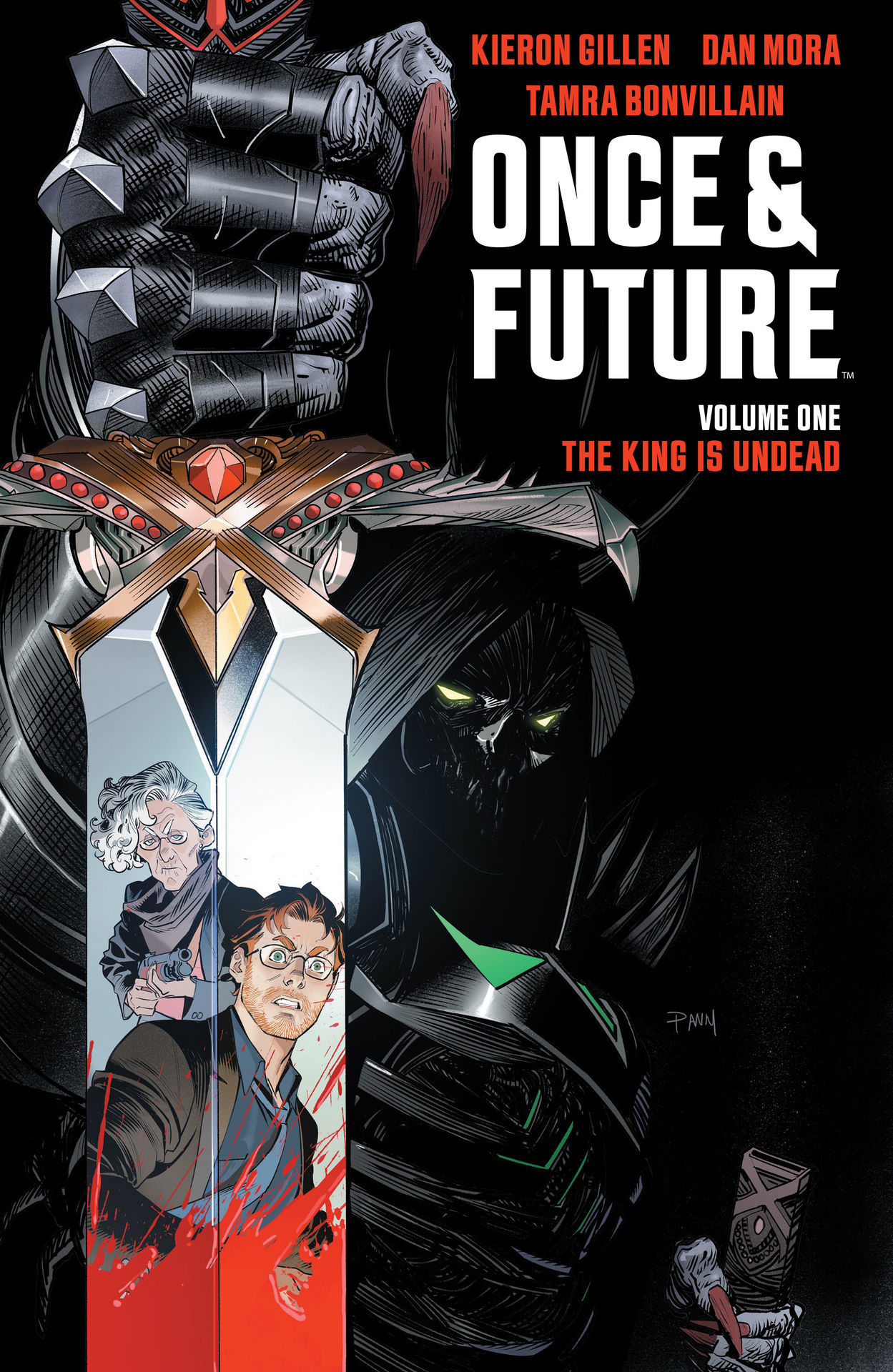 There is something intrinsically appealing about a retelling or reinterpretation of a familiar myth. The stories we often learned in our childhood imprint on us and become a benchmark, a standard, a constant reference. Putting aside for just a moment the Eurocentric nature of my middle school and high school curriculum, I do have a fondness for Arthurian legend: King Arthur and the Round Table, the exploits and endeavors of brave knights fighting for their liege. Which is why I was so interested when I heard about Kieron Gillen providing his own iteration of the story with Once & Future. 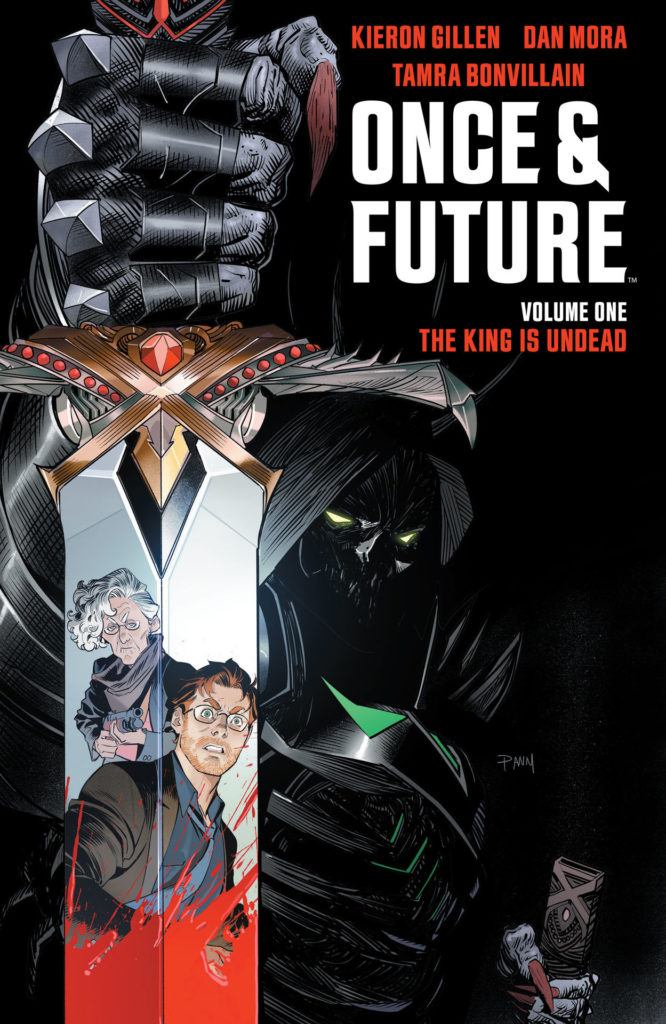 Once & Future checks a lot of boxes when it comes to a story that I’m willing to invest in immediately: dark subversion of familiar tale, an examination of legacy within a familial context, and a predominantly fantasy facade with accents of horror. The opening of the volume has a sort of classic film vibe, where a merchant shows his wares to an interested customer, only to find that the said customer will not be paying in the conventional way and that said customer is almost certainly a bad person.

Gillen, alongside Mora’s illustration and Bonvillain’s colors, set the dark tone of the series right out of the gate. Then he immediately pivots to a much calmer scene: a nursing home featuring one of two protagonists, Bridgette. Bridgette is listening to the news with the rest of the residents before she hears a series of buzzwords that immediately catch her attention. She proceeds to ditch the orderly to go do something about it, which leads us to another scene shift to the other principle character: her grandson, Duncan. 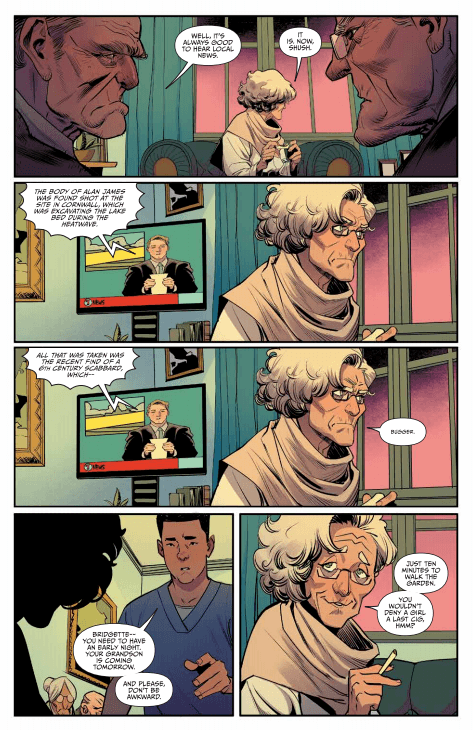 We meet Duncan in an almost sitcom like fashion, wide eyed and arms raised in frantic apology. And when he gets the literal call to adventure from his grandmother, he finds himself suddenly made aware of his previously unknown legacy and the strange task he has as an inheritance. In essence, the prototypical arc of the hero’s journey. But just because the start of the story resembles the classics doesn’t mean the rest of the story does.

For one thing, Gillen’s signature humor and sardonic wit bleeds through the page. The sharp tongue of Bridgette clashes wildly against the everyday everyman’s bewilderment of Duncan. This dynamic carries the opening sequences as the grander myth arcs that differentiate the story are put into motion. We know how this of the story goes, but by the time we get to the end of the first chapter and Gillen’s re-contextualizing of the Arthurian legend in a Brexit-riddled timeline, that’s when things go off the rail in the best way.

The name King Arthur has an distinctive aura surrounding the myth. Gillen cleverly reminds us, the readers, that the King Arthur didn’t just unite the Britons, he waged war against a European empire and crushed it. This is a tale where King Arthur and his followers are straight villainous, and I love it. Because it is true to how history and myths are made. We sanitize the unsavory parts of the story. It speaks to the complicated history of British expansion. And because, it kind of just tracks with how the rest of the world is going.

Much like Duncan has this vision of King Arthur, we too get a chance to unravel the foundations of the myth and explore the parts of the story that are glossed over. Duncan, under the mentorship of his grandmother, becomes an intriguing character and I’ll let his arc speak for itself when you find time to pick up a copy of the book. Plus, the kinship facet to the story is a also a crucial and endearing element that I don’t want to spoil too much on, but know that is there. 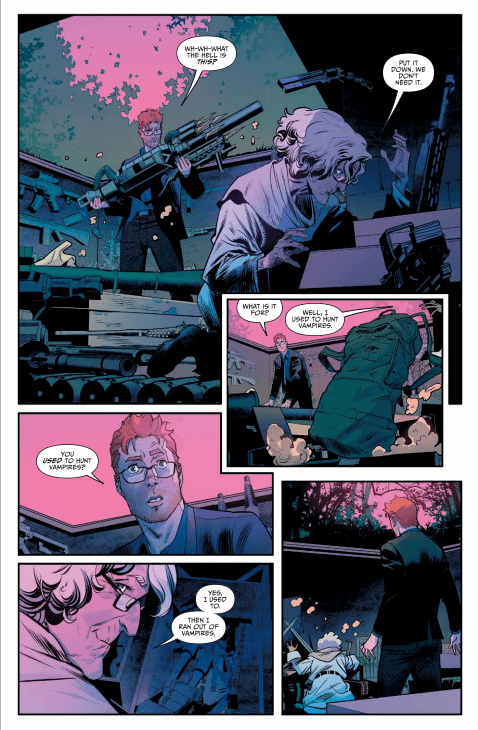 And that’s just from the textual standpoint. From a visual stand point, Once & Future looks incredible. Mora’s characters and monster design is incredible and Bonvillain’s colors are a perfect compliment to the tone of the story. Each page has distinctive visual cues that make it very easy to track the actions and the scenes changes, something that I appreciate as someone who can occasionally speed past pages in excitement. But the way each page is structured draws the eye and lets them linger and languish in the beautifully dark fantasy world. 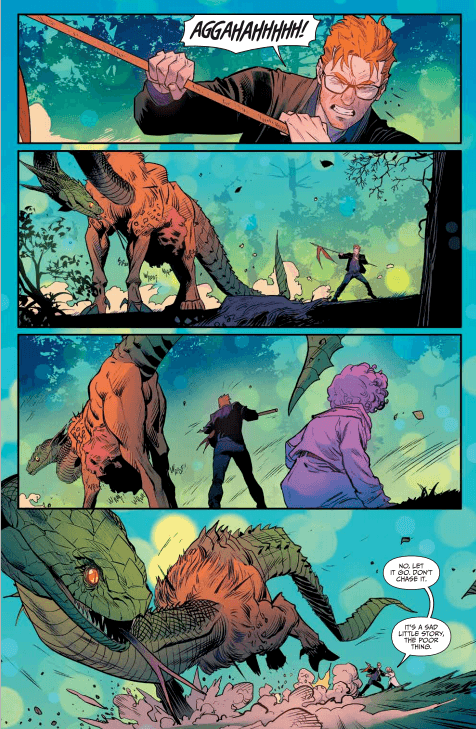 Once & Future‘s first volume is an exhilarating read. It’s a story that reflects the strange timeline we currently reside in and also provides a new take on the Arthurian myth that feels…. warranted. It warrants a read for all of you fantasy comic fans out there. It really does.