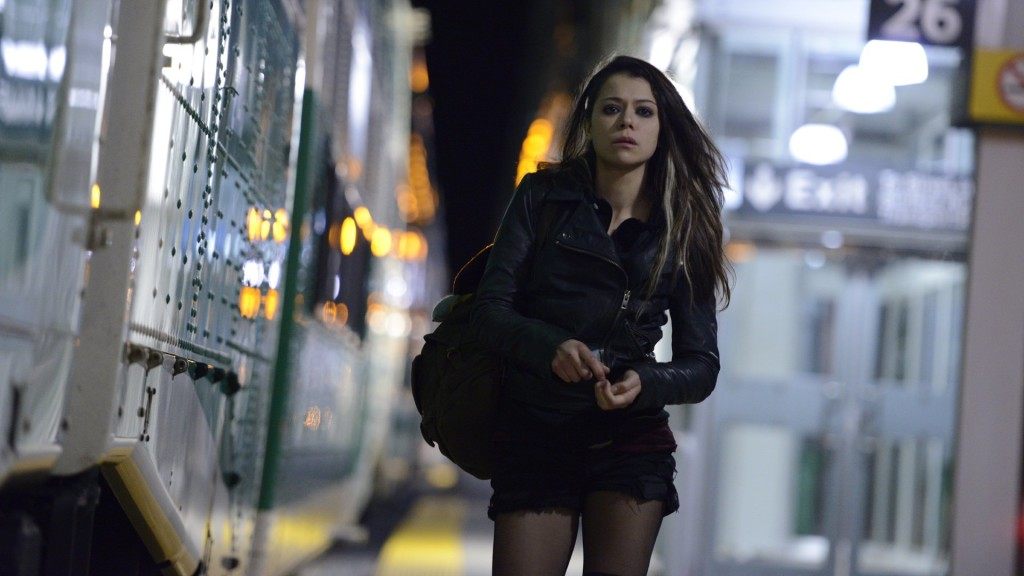 Tatiana Da Gawd is back to play like 14 different people on the cult favorite and season 3 opens with that creepiness. We know that Helena got that hood over the head, carried out against her will to treatment at the end of last season, so we know that this opening looking like the extended credits of Weeds or some shit gotta be fantasy. Helena is having her baby shower in what looks like some Convergence universes or some shit: Sarah from the Sons of Anarchy universe with all that leather, Cosima looking like she just came from Ukrainian story time with the kids

Felix from the Mad Men universe and Alison in the tidy floral print. Which is probably how Alison looks in every universe. Get a good look at Helena in this pink ass dress with all her Sestras around because we probably ain’t seein’ that shit again anytime soon.

So of course, Helena gives birth to a scorpion instead and that joint c-sections its way out of her. Turns out she’s in a pretty small box that looks like what Buffalo Bill would have evolved to keeping people in if he didn’t care about their skin care so much. Oh, that scorpion? Turns out that she and Helena are old friends. From like season one when Helena was going around merkin’ all the other clones on some divine will shit. In other words, this ain’t gonna end well for anybody.

Quick shot of Rachel in surgery from when she got that SAT-ready number two pencil to the eye last season. Rachel Deathstroke Origin Story!

Sarah and Fee chillin’ at the at the lake talkin’ about Who Run the World, Girls Run the World but we should probably find out what the hell is up with the boy clones first. Then the luxury sedan pulls up doing Mach-5 and shit and who should step out? Delphine? Lookin’ like Amanda Waller? Sheeeyet.

Delphine gives Sarah the rundown on Project Castor (the dude clones used by the military) and it turns out these muthafuckas got their master’s degree in absolutely no chill whatsoever. I think it’s the humanities. At any rate, Sarah is like these fuckboys ain’t really my problem, but it turns out The Worst Guys been trying to kidnap Sarah’s sestras and giving the sleepy time tea to anybody standing in their way… Awesome…

So Sarah Manning the Legend walks into old boy’s cell and he basically starts threatening her off the bat. Ladies, if a dude ever starts his conversation by saying, “you’re made of the good stuff, aren’t you?” it might be time to tip the fuck out. He lets Sarah know that he knows about all the of the Sestras and DYAD and basically wraps it up with some “no one is safe” type shit. Sarah gives him the “if you come near my family, I’ll kill you” speech that is required anytime someone makes a threat towards you on TV.

Can we check in one time with the Surburban Gawd, the Soccer Mom Murderer, the fresh-out-of-rehab-don’t-I-look-smashing-in-my-purple, Alison? Alison has done more dirt than a grave digger, but she out here multi-tasking by talking with Clone Club on the conference call and making sure the soccer players don’t bunch up on the field.

Marci the incumbent is out pressing the flesh for some votes, but Alison is like, your re-districting plan sound real Republican 2010 and we vote Blue in the Clone Club, so I’ll be running against you. Because Alison is SUPER ELECTABLE. This campaign gonna be a shit show of epic proportions and I can’t wait to watch every second of it.

Mrs. S comes home from grocery shopping but her Bourne Identity training taught her that something ain’t right. She grab the closest blade and goes investigating but gets jumped by one of the fuckboy clones. She stabs dude with a bic fine point red pen, the same shit you got nightmares from junior high when your essay got returned and every paragraph said “expand your thesis.” Dude puts her down and removes the hood, talkin’ about, “Do you know my face.” Mr. S is like “…no, but that mustache is fucking terrible.” He’s looking for Duncan, but he doesn’t know that Duncan LITERALLY took that sleepy time tea and is no longer walking this plane of existence.

Fee and Sarah show up to Mrs. S’ crib and find out that another fuckboy clone is running around with an ill-fated mustache and military training. They also find out that Mrs. S is the one who gave up Helena to Project Castor to help out Sarah and Kira. Sarah is all the way fed up with Mrs. S making decisions on her behalf. Now Sarah knows she’s gotta deal with Delphine and DYAD to get Helena back because Mrs. S stay doing triage in the field and not consulting anybody.

Delphine finally comes to see Cosima and Cosima Da Fictional Bae (yo, I think she can hold this crown for the time being, she’s earned it) is happy to see her till she finally see the jig. Delphine ain’t there to reunite with her boo, she there looking for Sarah on some DYAD business. This heifer. She’s the new Rachel now, so she tells Cosima that she won’t be working with her and Scott in the lab anymore. In other words, “I don’t, fuck with, YOU.” Straight broke Cosima’s heart, yo.

Alison and Donnie going over the budget and I’m amazed that Alison lets Donnie have a say in ANYTHING anymore. He offers up his expenses from when he was a monitor and it’s obvious that he was not getting paid enough to be a 24/7 spy, yo. Apparently DYAD didn’t adhere to any minimum wage laws. Alison says she wants to run for school trustee and Donnie is like, yeah, Marci gotta go. And considering that Donnie has killed a man, I wasn’t exactly sure of the sentiment behind that. They scheming on the come up like…

Delphine calling all of Clone Club to help with the visit and Sarah Da Schemer thinks she’s found a way to get Helena back by playing along. Of course we need the transition of a Sarah-to-Rachel montage, complete with Fee giving her notes on acting along the way. Ain’t nobody gonna talk about how the clones all got wigs of the other clones at the ready? Aiight then.

Cosima gets a check-up from Scott, and Scott is a little nervous about the fuckboy clones and the “Lesbian Drama” (because those are equivalents Scott… bigot). Cosima convinces him to stick around for a bit because she’s Duncan’s code book for the genetics on all things clone, but she wants to keep it a secret from everyone else. Cosima, you know how secrets do on this show!

Back in DYAD, SarahRachel still trying to figure out how to walk with a stick up her ass like Rachel, but Ferdinand is in the building and won’t let her do a quick meet and greet. Ferdinand is a cleaner and is investigating all of them, so SarahRachel tries to strike a deal to get Helena back from Castor. Ferdinand wants to see Sarah Manning in custody, but AlisonSarah will have to do. And then the most inappropriate laying of hands ever… Bruh. You can’t be checking for “surgery scars” on AlisonRachel like that. Ferdinand pulls SarahRachel aside setting up some “I got one night in town” type shit for the night.

Meanwhile fuckboy clone #1 is doing his P90X on some nature boy shit.

So, dude killed two people as part of a security detail and we giving him workout equipment in his cell? That’s like arresting someone for poisoning folks at a restaurant and then assigning them to the kitchen in lock up.

Delphine goes into check on Rachel Deadshot still in recovery. Everything starts off like a routine check-up but then that shit takes a left turn like it was at a traffic light.

Daaaaaaamnnn Gina! I mean, we all hate Rachel, but you just gonna push on her cerebral cortex like that?!?! Delphine wanna be Amanda Waller SO BAD! She makes Rachel confess to project Helsinki which isn’t good for ANYBODY, fam.

SarahRachel is entertaining Ferdinand and finds out what exactly Helsinki is, which is basically the 2015 version of ending of The Departed. Rachel was planning to snatch Sarah’s ovaries and then have all the other clones wiped out simultaneously. Ferdinand comes in and catches the end of SarahRachel trying to warn Alison that assassins be creeping and it looked like Sarah was gonna have to go Gone Girl on Ferdinand with the nail file. But as Cersei Lannister been telling us, women better weaponize themselves and SarahRachel instead guesses correctly that Ferdinand and Rachel used to play that S&M murda muzik. SarahRachel puts Ferdinand on the bed face down with his own belt around his throat while he asking if she remembers his safe word.

[quote_simple]Ferdinand: This is awesome, my climax bout to be on fleek![/quote_simple]
[quote_simple]SarahRachel: I wonder who I should call first after I choke this muthafucka out and have to get rid of his body.[/quote_simple]
[divider type=”space_thin”]
While all that is going on, Alison is saved by the fact that Helsinki apparently outsources their assassins (but not to the Black Widow program) because dude set off a $15 motion light on the back porch. Bruh, you need way more training.

Right before SarahRachel gives Ferdinand that long goodbye, Delphine come in with some ARGUS agents and breaks up the S&M (M being for murder) party.

And Nature fuckboy clone? Yeah, he just got sprung by pornstache fuck boy clone. So now two of these bastards are on the loose.