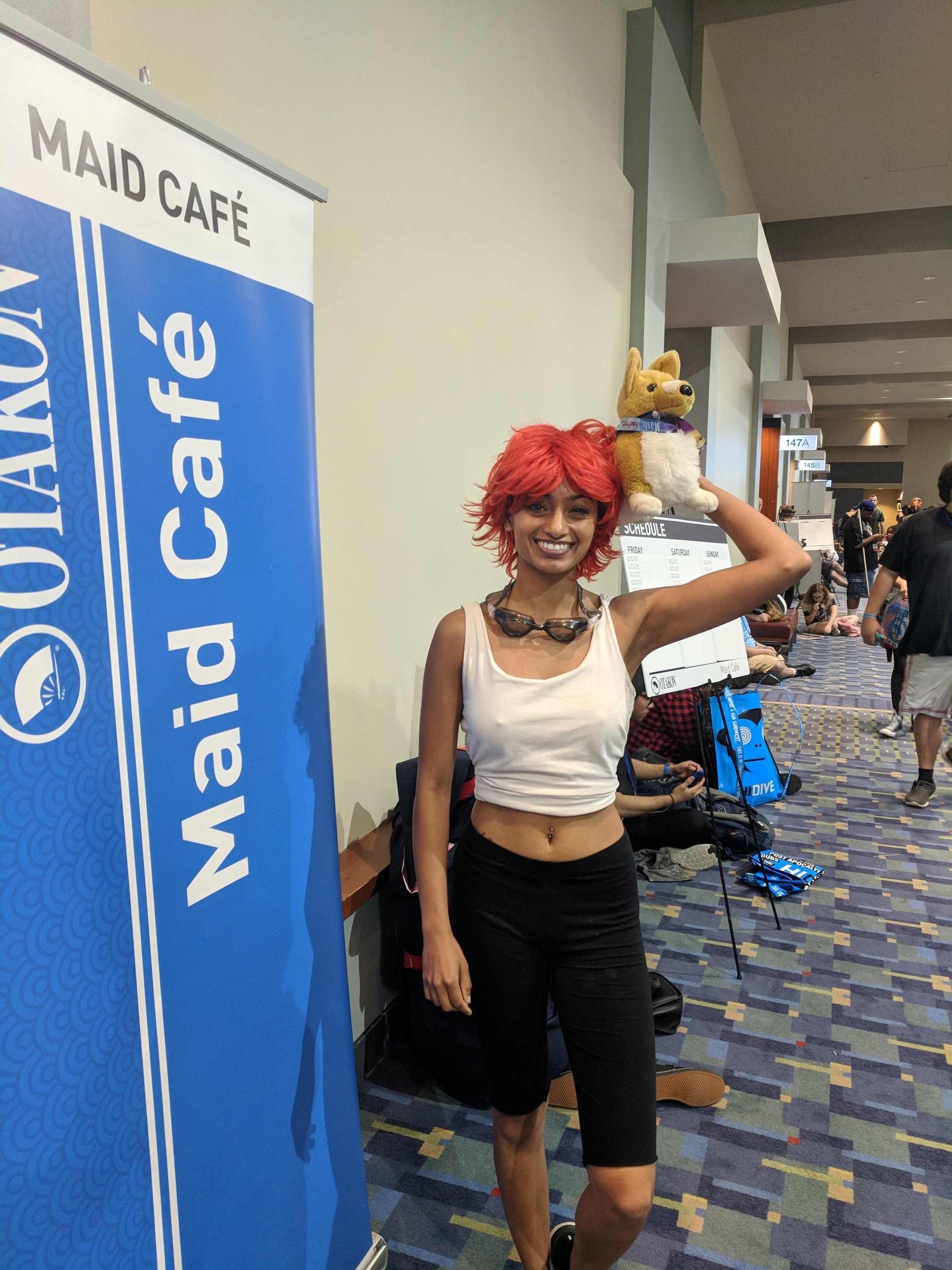 Otakon weekend once again has proven that old-school nostalgia, the need to nourish creativity, the frenzy for all things nerdy, and the desire to celebrate Japanese culture and animation can triumph nearly anything that comes its way. This convention has survived through a tremendous amount of adversity. Each obstacle has made the staff and convention stronger. I am proud of how Otakon has evolved over the years, and while not perfect, it has remained a loyal friend for the fans by the fans each and every time.

Walter E. Washington Convention Center in Washington D.C. is still a new venue for this veteran convention; however, its second year only solidified the belief that the move was 100% necessary. There is a far less crowding than during the last few years at the BCC. You feel like you can breathe much better, while still having easy access to the immense amount of activities. They have a giant game room with old-school arcade games, every iteration of DDR, table-top games, and new and strange indie games. Maker’s Studio was also a place I stumbled upon, where attendees would be able to bustle about creating cute things from ribbons, hot glue guns, and string. This year, people were able to make Teru Teru Bozu, long-established Japanese dolls that helped keep the bad weather away. They were super sweet to see hung up outside the studio, and were fun to make. 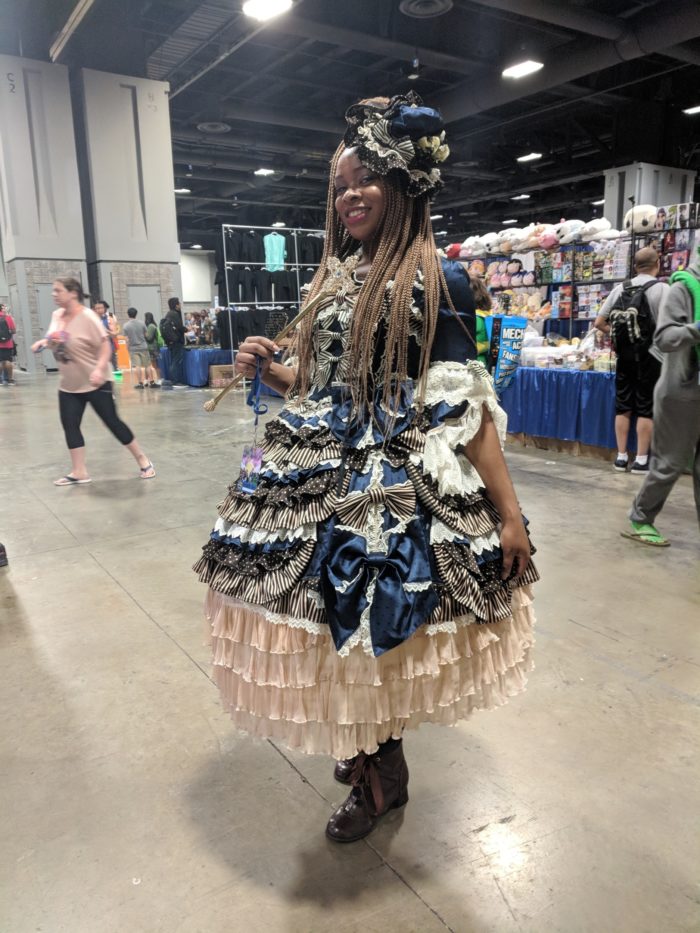 The Artist’s Alley is definitely more my own style; you come here to support artists of every background. The prints, keychains, accessories, and clothing are all super cute and unique and you walk away knowing you’re helping fellow nerds survive and thrive. Back in the day, I would definitely walk away from AA with numerous prints but in my adulthood, I managed to cut back.

A popular attraction at plenty of anime conventions is the Americanized version of a Maid Cafe. These events are organized by Otakon staffers and volunteers, and operate on a ticket-based schedule. There are different time slots and in order to gain entry into the cafe, one must purchase a ticket that is separate from the Otakon membership badge. You can drop by and be welcomed by the sweet and upbeat maids. I got an in-depth look at the operational function of the cafe from the Department Head/Head Maid Ichigo (Kat). Eager to step away from the fetishized history of maid cafes, Ichigo instead considers the work they do to be “Superior customer service.” 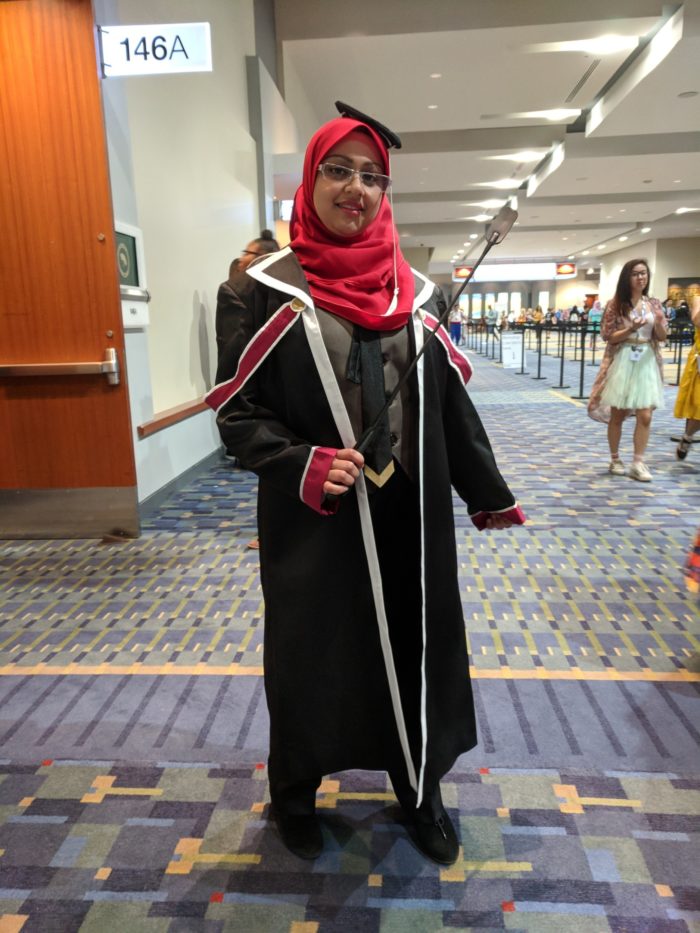 For those that do not know, Maid Cafes are a popular attraction that originated in Japan, the Akihabara district in Tokyo. They cater to everyone, but the original concept was to stoke the imagination of male nerds or “Otaku.” Maids, with their classic French outfits, innocent demeanors, and playful acts are chosen for their ability to interact well with their audience in tandem with staying in character. Jubilant energy and good acting are necessary to put on a memorable show for their patrons.

The Ota Maid Cafe is a labor of love for Kat Lemons; it requires yearly upkeep with set responsibilities like every other department. Operating mostly on a digital platform, Lemons fields about 100-150 applications each year. The maximum amount of maids accepted are 40-45 people. Essentially, anyone 18 years old and over can be a maid. It’s an inclusive space, with a hygiene and dress code. The duties include dancing, fleshing out your individual character, playing games with customers, setting up the space, plus serving drinks and food. All the maids were super pepped up. The dances were energetic and the patrons seemed to be having a good time spelling their names in the air with their butt and watching the performances. It was certainly a treat being able to understand how these cafes work from a logistical point of view, and was so happy to see such a huge supportive team behind it.

I have been a long-time convention goer on the East Coast (Maybe for about ten years?!? I am OLD), and what remains a huge part of the con scene is how diverse the audience it. Being held in the nation’s capital, especially at such a politically divisive time in our nation’s history, only emphasizes the struggles people of color and other marginalized folks go through. Here at Otakon, I noticed that we flourish in spite of those who wish to not just tear down those that are different, but those that are actively trying to evolve the communities they are a part of. The nerd community is no different. We each have our own unique stories to tell, whether it be through music, animation, storyboarding, stand-up, or interpretive dance. The ability to have a platform to tell our stories to possibly millions of people is significant, especially when there was a time where many marginalized people were barred from even trying to express themselves. 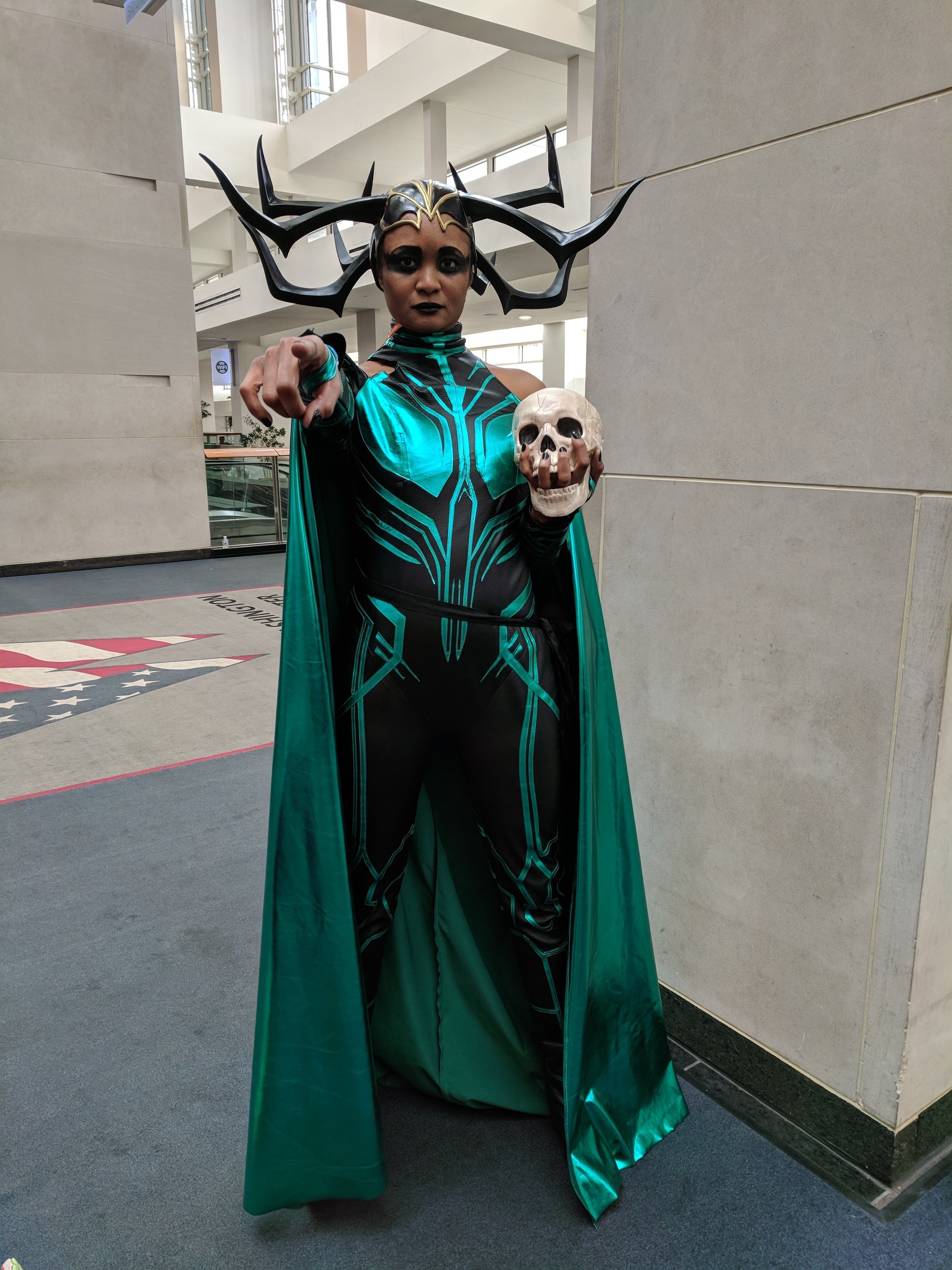 One voice actor that I feel has never been afraid to ‘voice’ their opinions (hehehe) is actor Sungwon Cho, AKA ProZD. They are an immensely popular YouTuber, with over 1.5 million subscribers, whose videos focus on nuances within the anime and gaming community, while also discussing socio-political topics that often intersect with the nerd world. I was able to interview ProZD about his experiences growing his acting career. He spoke of humble beginnings from finding his passion in doing radio plays with a friend in high school, which snowballed into his YT channel, a gigantic fanbase on social media, and a show on Crunchyroll, Anime Crime Divisions. By doings radio plays, he says, reading scripts, portraying the characters, even in an amateur setting, helped ignite his love for voice acting. This led to getting a foot in the door for other bigger projects.

On a personal note, being able to see ProZD become more and more popular and visible over the years, has been a huge inspiration for me. I love seeing people of color excel in this environment, especially in the face of big media companies and geek websites who refuse to highlight people that aren’t white. Seeing someone being able to call out bullshit in the world, especially racist nonsense, was eye-opening on a whole other level. I inquired as much to ProZD, if they choose to infuse political or social messages in their content, with which they replied that they sometimes do. “I’m not shy on my Twitter,” is one memorable quote, and if you follow their account you know this to be very true. 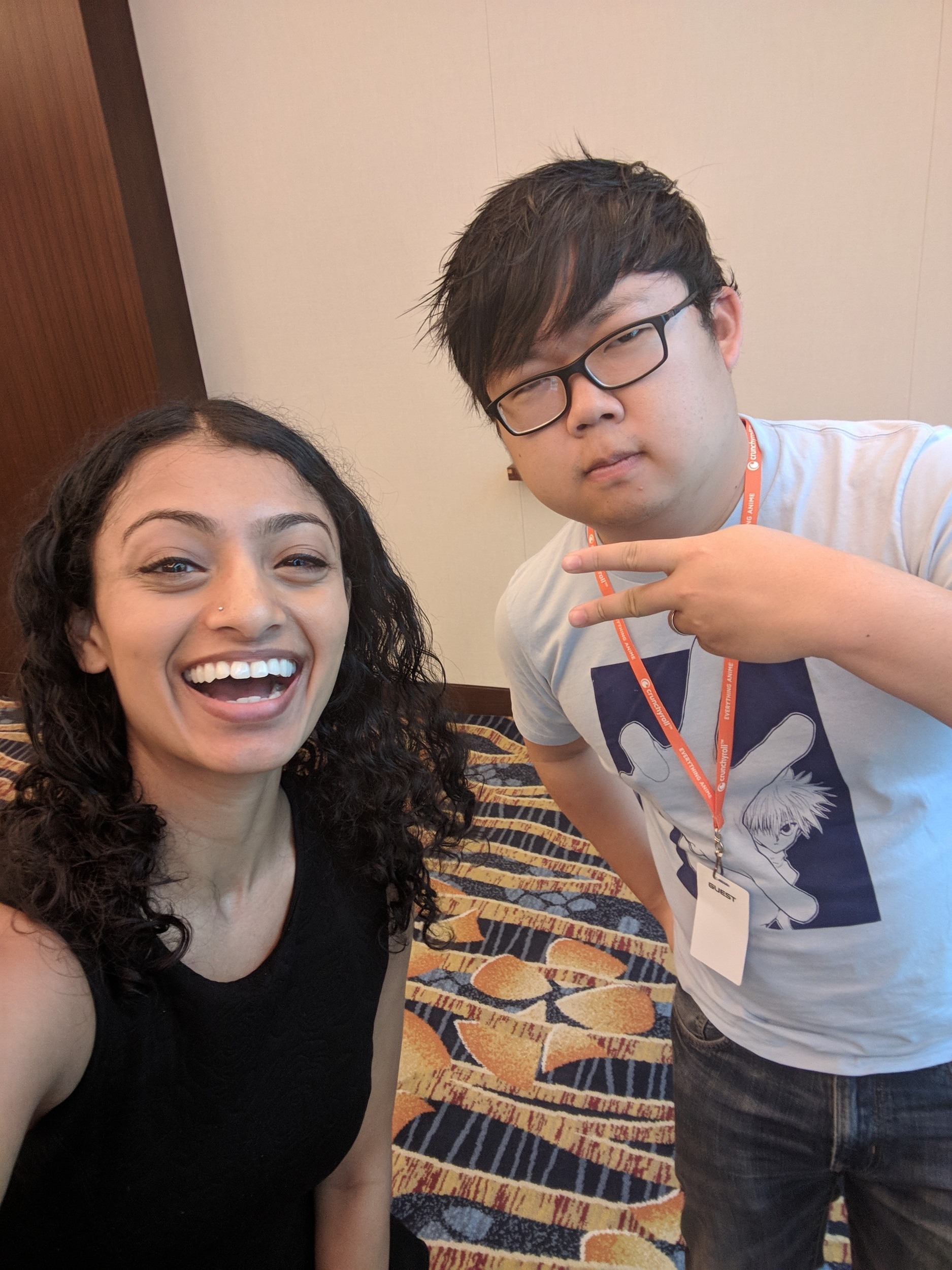 This was followed up with my question if they felt that they have a responsibility to represent POC in the VA/gaming community, where they stated, “I don’t want to say people have an obligation, because of how exhausting the environment is.” However, they do receive positive feedback on their work and that’s a great thing. I believe that we need more voices (hehehehehehe) like ProZD in our world, because they make it a much brighter place.

Otakon once again has proven to be the amiable titan of anime conventions on this side of the East Coast. What has made it live within the hearts of every Otaku is the continued steadfast loyalty towards its mission of celebration of Japanese culture and animation, alongside its love for its fans. I’ll see you next year Otakon.