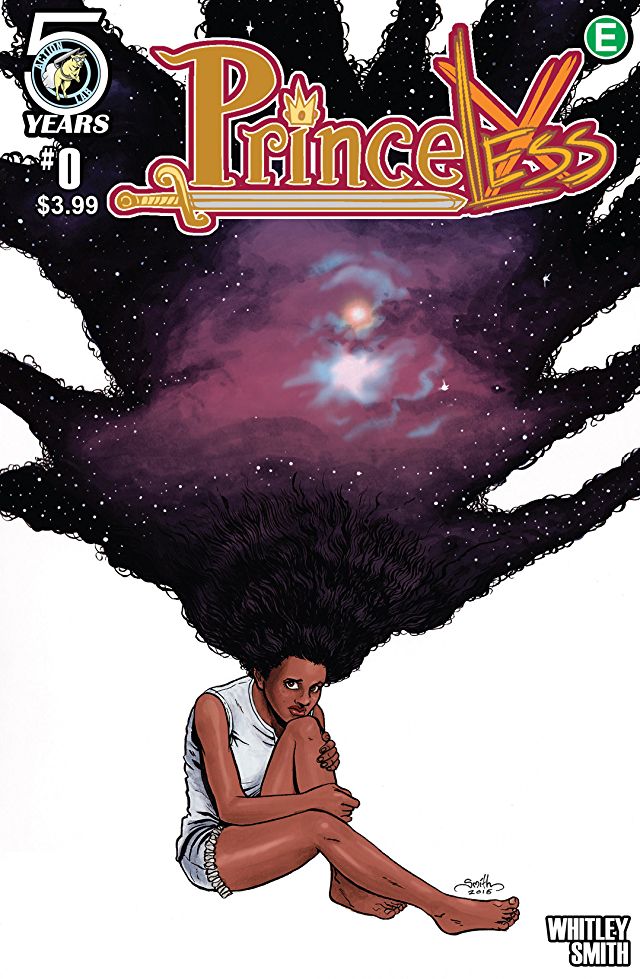 An issue of Princeless to drop at the end of December, near the end of the year? Count me in! Yes! And the cover image is EVERYTHING. It’s Black Girl Magic times one hundred.

As a Black woman, I feel a certain kinda way when I hear folks talking about Black hair. Now I grew up in a loving household where I had Black doll after black doll and had a Black/brown-skinned Jesus, Santa Claus and angels present in the art and decor to boot. But still I kept hearing despairingly comments about the hair I had and women who had hair with textures like mine. Even today as an adult I still feel like I have to shield myself, or my heart at least at times, when navigating a world that constantly attempts to hold me up to European beauty standards.

I still have to live in a world where folks will be pressed to tell women who look like me, with hair and features like mine that we are less classically beautiful. (Protect Viola Davis at all costs). My point in the matter is… when I hear folks talking about Black hair I cringe a little because I know, by default, there’s a good chance my hair, like the hair that belongs to my mother, her mother, and all the women before them, is at the center of a tasteless joke.

When I heard that this issue of Princeless was about hair, Black hair to be exact, I was intrigued. I’ve been following Adrienne’s adventures for a while and she’s come up against all type of dangers. She’s been up against and defeated (with help at times) several foes: pirates, goblins, vampires, backward gender roles… but this issue she would be tackling an elephant in the room in her case, Adrienne’s attitude about her hair.

[divider type=”space_thin”]
“Tender-headed,” are you familiar with this term? If not, ask your cousin Google. I was this kid. With thick hair that never wanted to do right. I hated my hair most of the time. School photos? Easter Sunday? Family photos? Big School Events? I fought. I cried. I bemoaned my fate. Seeing myself in the pages as a young Adrienne brought back many memories. The first wave of them not good as I remembered the horrors of brushes swiping my ears and combs painfully parting my scalp like Moses as he did the Red Sea. LORDT!

This issue of Princeless jumps right into business with continuity in full effect with our darling hero reminiscing on the wrecked state of her hair some issues back, thanks to a nasty little baddie in the swamp. As she’s attempting to be on her #CarefreeBlackGirl grind while out and about with her right hand girl Bedelia, she starts thinking on her hair. She starts doing some deep thinking on her hair in relation to herself, her body image, her self-worth. It makes her take a trip down memory lane to when she was a bit younger:

[divider type=”space_thin”]
This issue is a trip down memory lane for some of us readers. For others I think it will be an eye opener — a glimpse into the wondrous world of Black women and our hair, our versatile, daring mane that adorns our heads. It’s a fun issue too, like when Adrienne recalls all the different hairstyles and options she had. It’s a good mix of serious and jokes. Our girl is riding the struggle bus and I can relate! I went through my hair journey while reading.

From early years learning to hide when my moms came through with her “tools,” AKA her needed items for the boss battle that was my hair, to the very first and the very last perm I received (which did serious damage to my hair — thanks Auntie Ernestine! You’re never living this one down.) to the  classmate from my first semester of college who “innocently” asked where I bought my weave from because she had never seen a “Black girl with such long hair that was her own” …it’s been a fantastic hair journey where I’ve reminisced while reading through this special offering of Princeless. 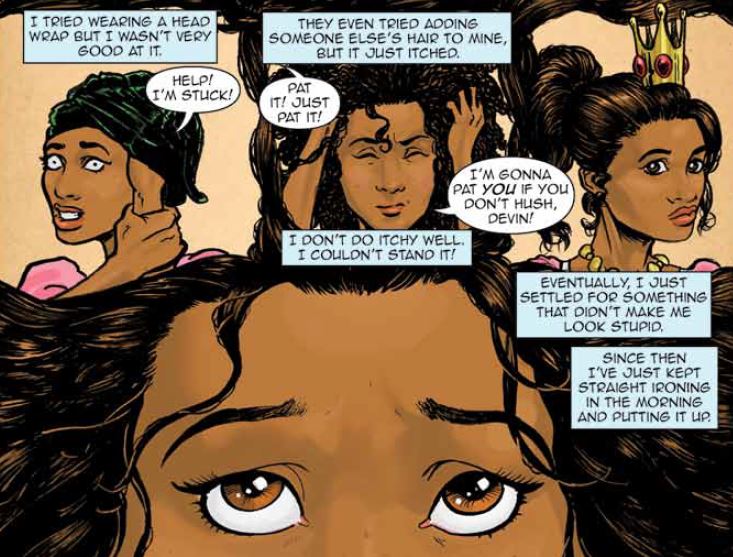 The Princeless series had a family of artists who fill the pages with the visual goods over the years, which include folks like M. Goodwin, to Emily Martin, to the duo that is Ted Bandt and Rosie Higgins. Alex Smith takes up the reigns here in the honorary guest artist spot and he does a decent job. Some of the panels throughout the book look a bit wonky, but he keeps at it and it gets it right where it counts. The later half of the book really shine and some the last pages just make you stop and stare in awe.

This issue ends with a great image to burn into you retinas of a character we know and love who is finally on a path of greater self-love and self-acceptance… This is one book you have to go out and buy. One copy for yourself and I don’t know how many copies for those who you know need one. This girl is picking hers up with her pull list next week and she can’t wait.