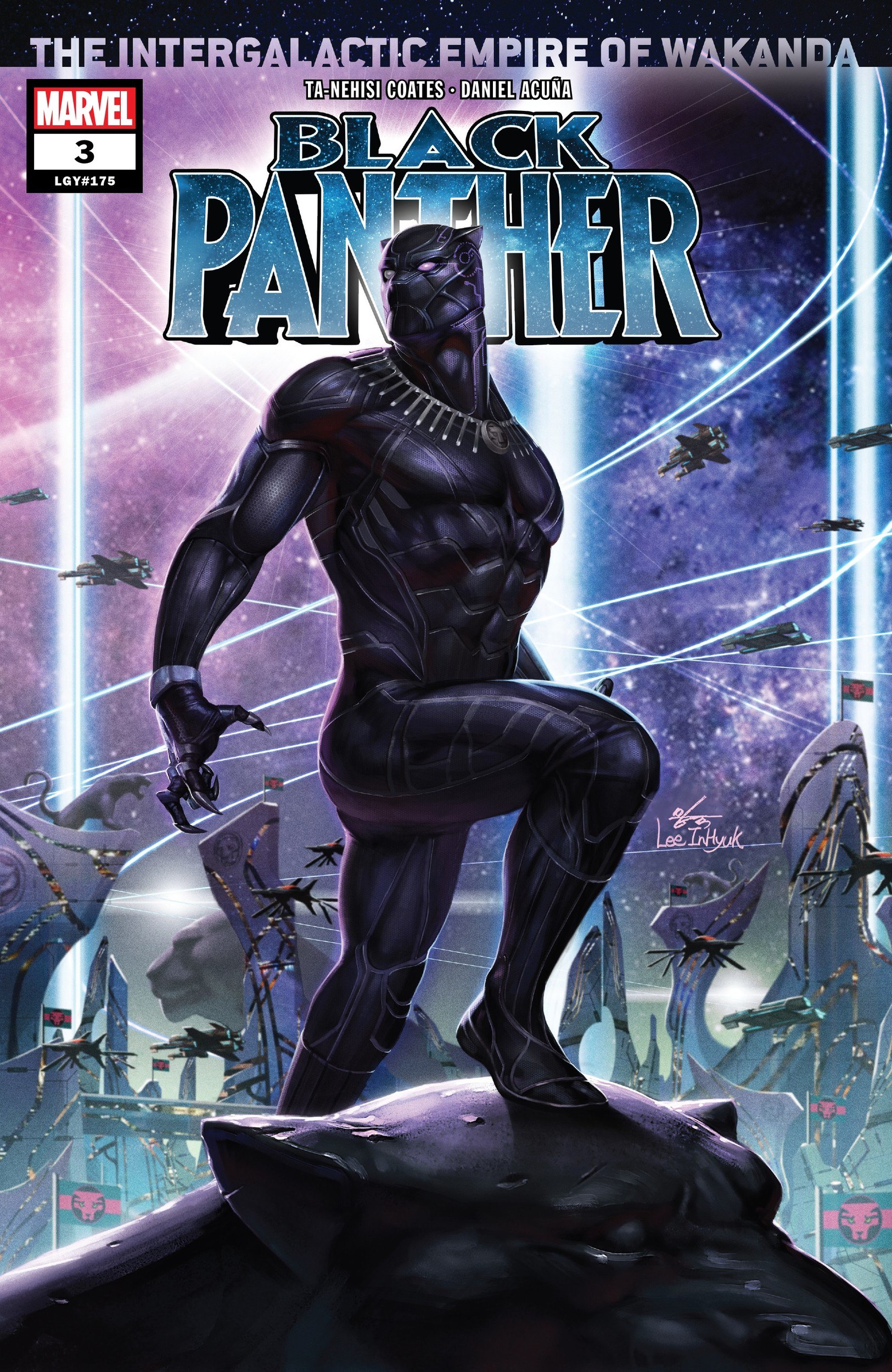 “The Empire speaks of the grandeur of its Civilization.
AND IT IS GRAND. BUT IT IS ALSO STOLEN.” – NAKIA.” – Nakia

The third installment in the 2018 volume of Black Panther, “Book I: Many Thousands Gone,” continues to boldly go where no panther has gone before. The mystery surrounding the Intergalactic Wakandan Empire and the brain-wiped T’Challa yields more clues as Emperor N’Jadaka continues his aggressions against the rebels. The key to the rebels’ ultimate victory, however, may be the very thing that could bring them certain doom.

Legends never die. They just fade away. That faith in the return of the legendary T’Challa fuels the heart of the maroon rebellion leader, N’yami. While stationed on one of the rebellion’s lunar hideouts, N’yami reveals to Naki his belief that their new ally, the freed slave T’Challa, is the same T’Challa of lore – “T’Challa the Ultimate. T’Challa the Avenger.” According to record, T’Challa disappeared during a war with the Shi’ar empire, lost in the midst of battle. N’yami, however, knows that this knowledge must be safeguarded for such a threat to Emperor N’Jadaka’s power would mark them for death. 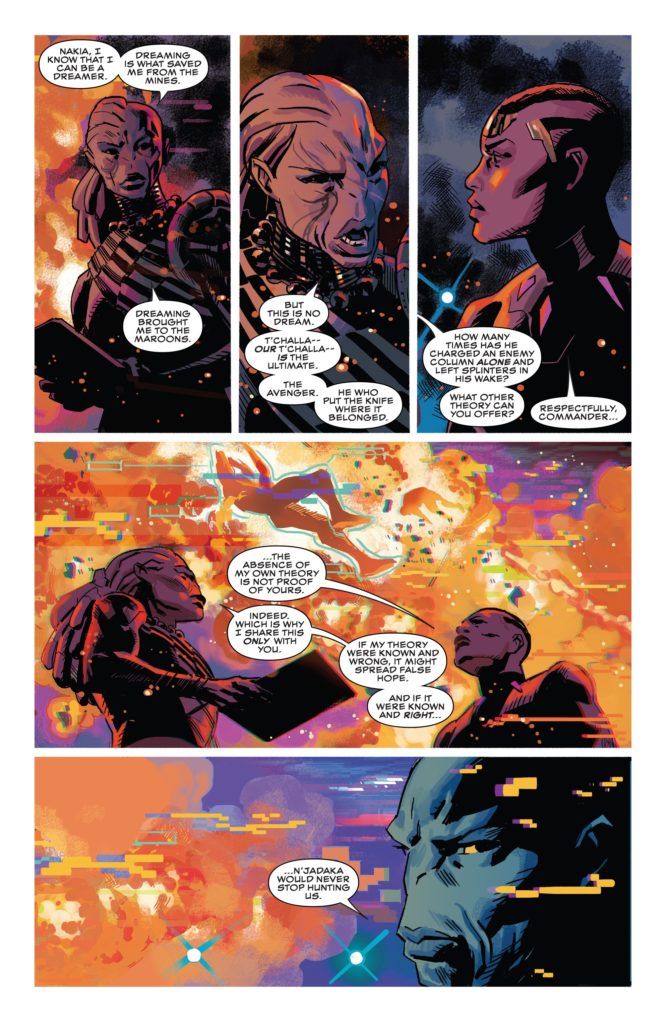 Later, when Nakia takes T’Challa on a climb to meet a shipping vessel, she tells him of how the Empire harvests the memories and knowledge from the mindslaves they conquer. The individuals are left with blank slates, while the Empire uses the totality of the amassed knowledge for its own mechanizations. The Imperial Archive, much like your favorite ethnographic collections in the museum of a former Western colonial power, is a place where knowledge goes not to be destroyed, but rather plundered. Upon the arrival of their ships, T’Challa’s enhanced senses detects the deception as a squadron of Askari Raiders rain from above.  T’Challa and Nakia hold their own against the forces landing from above, while M’Baku and his maroons defend the compound. When they are defeated by a powerful (and familiar) emissary of N’Jadaka, the real battle begins.

“Half of man’s recorded history had passed before anyone in Europe read or write. The priests of Egypt began to keep written records between 4000 B.C.and 3000 B.C., but more than two thousand years later the poems of Homer were still being circulated in the Greek city-states by word of mouth.” – Palmer and Colton, “A History of the Modern World,” 1950

The best art reveals basic truth in metaphor and characters larger than ourselves, but it is still relatable in humanity. When in the right hands, comic books as modern monthly mythology, have treated us to some of the most important allegorical stories of any medium the past 50 years – Watchmen, Maus, V for Vendetta, to name a few.  In Coate’s current run on Black Panther, the writer inverts the ideas and ethos of the normally isolationist Wakanda to discuss the mechanizations upon which empires are built and sustain themselves.

In the same way that Western society was built upon the slave trade in the 15th-16th century, and a rush for African and Asian natural resources in the 19th century, so too does the Wakandan Intergalactic Empire thrive through theft of culture, land, people, and knowledge. When Nakia asks T’Challa the rhetorical question, “Do you really think they invented the stellar engine,” she echoes the words of your actual woke friend urging you to read Ivan van Sertima. Through presenting the normally isolationist Wakandans as the imperial aggressors, Coates uses this alternate reality to not just toy with new versions of old characters, but to also present old themes of stolen legacy in a powerful, new way. 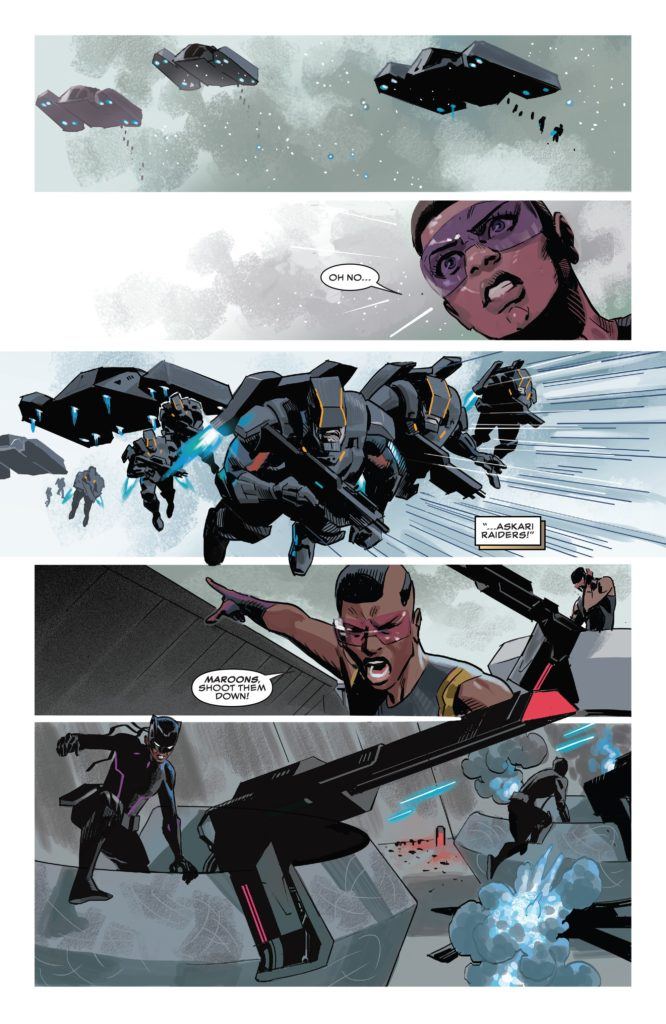 One of Marvel’s most enjoyable and most important series continues to press forward with another solid issue. Coates and Acuña are a dream team, weaving a sleek science fiction opera laced with powerful action sequences and musings on the abuses of imperial ambitions. From start to finish, Black Panther is a beautiful monthly that should remain a fixture in any readers’ pullbox. New fans may be thrown by the alternate reality (or is it?) take in the current story arc, but rest assured T’Challa lives in “normal continuity” to the current Avengers series and the upcoming Deadpool vs. Black Panther. Nonetheless, expect more answers to the “T”Challa in Space” odyssey by November as his sister Shuri headlines her own series by Nnedi Okorafor and Leonardo Romero.