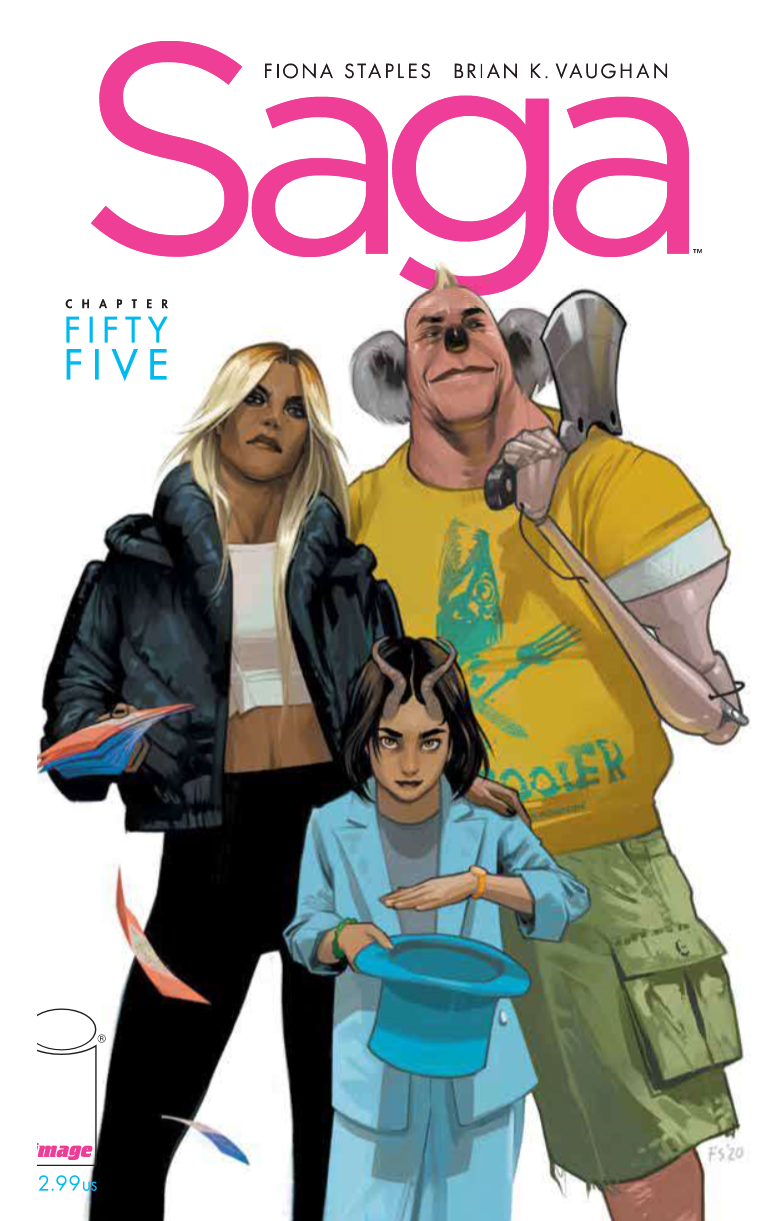 The Wendy’s Social Media Manager No Longer Has Time For Your Nonsense.

Saga’s back. The epic, space, fantasy opera that has captured the collective attention of nerds across the universe has returned in glorious and true form. Almost like piloting a treehouse rocket to evade authorities and a long standing war to which you and your familial unit are literally the antithesis for.

Welcome back to the fold, where Brian K. Vaughan makes you meditate you on the meaning of ideology one moment, snort at the next page, and then weep slowly into your childhood blanket you dug up specifically to cry into. Where Fiona Staples continues to amaze with immaculate set piece after immaculate set piece, brilliant renditions of assorted characters, and the occasional surprise full spread of sultriness. You know, just to remind you that you shouldn’t be reading it at work (or at the very least make sure no one can sneak up behind you lest they get the wrong idea).

It’s Just A Jump To The Left

Saga #55 is cognizant of the fact that time has passed in the real world, as Hazel’s narration explains that three years have also passed in her world since her father died. Marko’s death in Saga #54 was one of the most devastatingly emotional moments in all of fiction. As several animes and TV series have done in the past, the time skip in narrative allows for us to recallibrate. We get the echoes of their grieving, but we do not wallow in it, with the understanding that anything important that happened in the intervening time will be explained. It’s not exactly what I was expecting, but it’s a very sensible choice. Getting to open the issue with an older Hazel capable of getting into even more mischief is a welcome way to start 2022.

Finding Your Place In The Universe

The meta-narration of surviving and evolving ideas sets the stage perfectly. Brian K. Vaughn has clearly been thinking a lot about how transformative a work Saga has been. The care he and Fiona Staples show for the characters is endearing. This is science fantasy at its finest, a unique blend of allegory and imagination that forces us to reckon with the frameworks we participate in and treats us to an epic story as it unravels.

The extended 44 page issue uses the additional space very effectively. The extra heaping allows us to catch up on with the ensemble. The aftermath of Marko and the Will’s brawl is felt in full force and Vaughn and Staples have set the stage brilliantly for the next part of our journey.

It’s Good To Be Back

I’ve read many great comics while Saga was on hiatus, but Saga still hits different. Vaughn’s writing takes you through an emotional rollercoaster that leaves you reeling. Staples’ art has your eyes wide open in awe of the spectacle and then blush at the risque. Saga in its totality is the medium at its pinnacle. A sequential combination of words and visuals that captivate, that makes one relish the turning of the page. You can’t not talk about Saga when there is Saga, and it’s good to be back. Emotionally devastating still. But oh so very good.