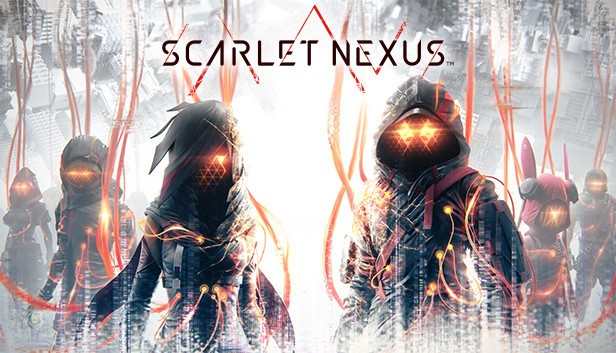 As far as game adaptations of anime go, Bandai Namco has the market cornered by sheer force of numbers. Applying their ‘playable shonen protagonist’ development techniques to an original property has resulted in Scarlet Nexus. This new action RPG by the team behind the Tales of series  isn’t just anime-styled, but has an anime series of its own airing alongside its release.

Scarlet Nexus’ ‘brain punk’ setting imagines a future where advancement was dictated not by technology, but psychic ability. Unfortunately, humanity’s minds are the favored food for the race of brain-eating chimeras known only as ‘Others’. Defending the future from these nightmare monsters is the Other Suppression Force. Players select between Yuito or Kasane, who are part of the OSF’s newest crop of recruits.

Aside from the specialized melee weapons of the main characters, Scarlet Nexus’ main mechanic for hunting down the Others is the suite of psychic powers at your command. Pulling the right trigger telekinetically grabs nearby debris to hurl at foes. Heavier and more elaborate improvised projectiles can be weaponized with the left trigger. The combos this creates are a fun rhythm within the standard action gameplay.

Techniques like Brain Drive and Brain Field further boost attack potential. One amps up your base abilities, while the other acts as a sort of ‘rage’ meter allowing for incredibly damaging telekinetic attacks. Additionally, each player character also has their own support squad. Calling upon their powers bolsters your own attacks, with two AI-controlled party members battling alongside you in the field.

All these abilities really showcase Scarlet Nexus’ anime style. For better or worse, so does the other major portion of the game. Squadmates can level up as well as the player, but getting the most out of their psychic powers requires completing ‘bond episodes’. These are essentially voiced visual novel segments, of the characters bonding between chapters of the game.

Persona-style hang-outs in an action RPG are an appealing idea. In practice, however, this translates to watching long scenes of mostly static images. Any fun from the squad getting to know each other is outweighed by the lengthy, mostly inactive format. Shifting from a menu of combat options to a silent observer of multiple long conversations all but kills the player’s momentum every time it happens.

This kind of Triple-A padding is spread throughout Scarlet Nexus. Both Kasane & Yuito’s storylines must be completed in order to fully experience the narrative. It’s an interesting gimmick, but doesn’t provide much beyond letting the audience know that the development team played Nier Automata. Even the action gameplay strains to carry the story through its often-reused locations.

So where could Scarlet Nexus go from here? The game’s polished presentation makes clear that Bandai Namco is betting on making a brand of its new property. For as often as the game gets in its own way, it’s definitely a unique experience. For how long depends on your tolerance for repetition and anime stylishness. Hopefully a future attempt will give Scarlet Nexus another chance to clarify its thoughts.

7 out of 10 Psychic Quick-Time Events