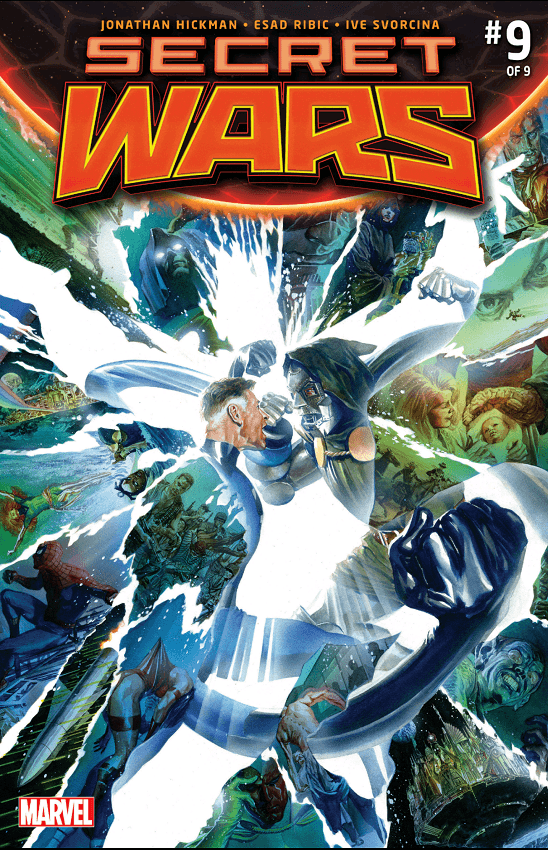 Halfway through reading the final issue, I stop to tell my homie Omar that the issue has been incredible so far and that I hope it sticks the landing. He asks if the crazy delays on the book will hurt its standing among the the other famed big Marvel/crossover events. I think it hurts it right now. I think when we get a few years down line, like how we look at the first Civil War book in 2016, that Secret Wars will go down as one of the best Marvel Crossover Events of all time. This didn’t tie up every loose end, we didn’t get cameos from all the characters involved to this point, but we did get big signature moments that will stand out for a long time. The conversation between Black Panther and Doom (god) is instant classic stuff, and all of it happens before we even get to the title screen. Hickman, who is an incredible writer with a real grip on his characters anyway, has lived in these voices for years and the naturalization shows in a big way. 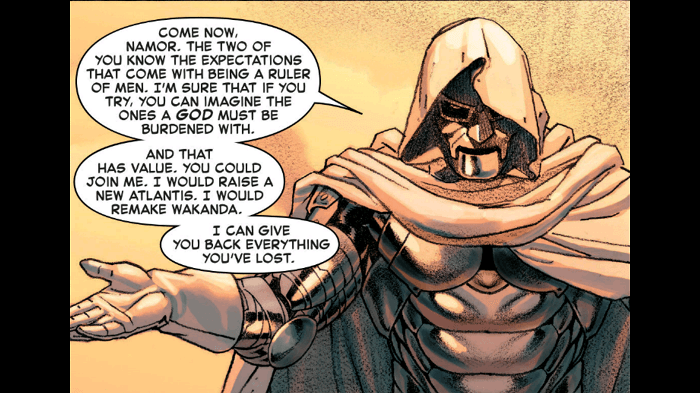 [divider type=”space_thin”]
The big moment though is undoubtedly the showdown between Doom and Reed, both fighting for control of this patchwork world that Doom has created and Reed’s family. Reed and Doom have tangled probably more times than anyone can count over the storied Fantastic Four history, but this showdown really feels like the final form of their existence. The hard truths and revelations displayed while they battle don’t feel like the culmination of this Secret Wars event, it feels like the end of a decades-long conflict.

Ribic does good work here to keep up with the narrative that Hickman drives forward like bulldozer. It is more or less in line with how the entire series has been, mostly hits, some misses, especially with character faces and expressions. Still, the action is appropriately epic and bombastic. A pretty even hand to a fitting end to the series.

Does it complete stick the landing? Mostly. With one extra over-sized issue, there was never going to be a complete wrap up of a story that Hickman has been telling for multiple years like this. There is enough explanation and cool Easter eggs and call-backs that makes this a satisfying finish. The most tragic realization, however, is that Hickman is done writing Avengers-themed books for the foreseeable future, and THAT saddens me deeply.