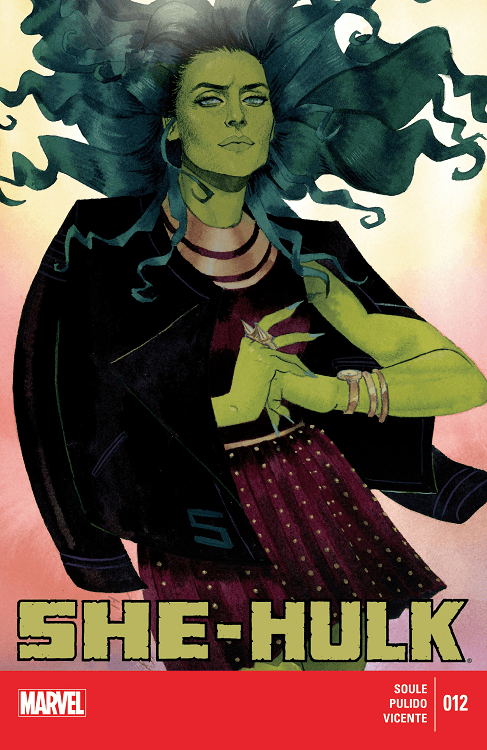 I’m gonna say what a ton of people have already said, it really sucks that Charles Soule and Javier Pulido’s She-Hulk has produced it’s last issue. This was an outstanding book. It looked gorgeous, was funny and engaging and made Jennifer Walters one of the best characters in Marvel’s line-up over the last few years. I don’t know why it didn’t sell well enough to keep around, but it will be missed. Marvel doesn’t hurt for good monthly books, but we are going to be missing an outstanding one.

The final issue (dubbed “The Final Verdict”) brings all the loose plot threads of the “Blue File” storyline to super fitting conclusion. Nightwatch is a bad dude in really expensive good dude clothing and the intricate back story (complete with afro rocking Monica Rambeau) worked really well to explain how we got here and where all the pieces fit. The only loose thread was figuring out exactly what Angie and her pet monkey Hua Hua were, though I’m not entirely convinced that Soule would have let us know that, even if the series continued.

And a last send off to Pulido and colorist Munsta Vicente, who made this issue and this series one of the best looking books on the stands for the it’s run. It has to be a challenge to balance She-Hulk between the Jennifer Walter lawyer side and the Hulk side seamlessly, but they pulled it off incredibly well.

I don’t know if the creative team got to go out the way they wanted with She-Hulk, but this was as satisfying a final issue as we could’ve hoped for (though I would’ve loved to see the tease of the Inhumans in the next arc that won’t exist). I will sorely miss this book, but at least we’ll be getting more Jennifer Walters awesomeness soon.