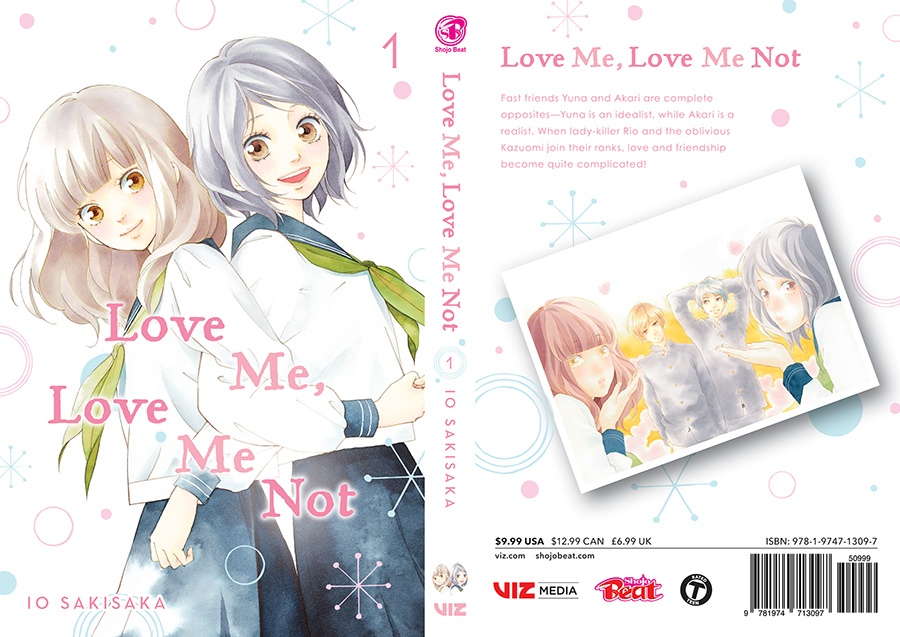 Viz’s imprint Shojo Beat has a new hitter at bat: another series by mangaka Io Sakisaka, who is also responsible for such fan favorites as Strobe Edge and Ao Haru Ride. She’s had success in the shoujo manga industry — Ao Haru Ride has an anime adaptation and a live-action drama film adaptation along with being translated in English. Io Sakisaka writes stories about youth who are complicated and learning about each other, themselves, and the world. When I heard about Love Me, Love Me Not I knew I wanted to figure out the strange dynamic between our four friends — two girls and two guys. I knew I wanted to read more about seeing the world and love through rose-colored glasses focusing in on the friendship of two teenaged girls and all the drama and goodness that comes out of it.
Look, it’s springtime. I can feel the shojo sparkles and flower petals dancing in the wind!

Out With The Old, In With The New

The series opens to a rather reflective and poetic set of pages: “If only there was a way for everyone to be happy…” and while this manga’s very much shojo, this is an overarching theme. Even in life, if we’re being honest, nobody seeks out being hurt, do they? We all go through so many transitions and changes in life: from relationships, romantic and not, to parents. Lovers split. Friendships fall apart. Co-workers leave for new jobs. Neighbors and roommates move away. Our lives are always changing and moving in ways that we can’t always predict nor have power to stand against.

Life moves at its own pace and we move with it, no matter how steadfast the stand we make. The midst of this change is the first situation where we find Yuna. She is starting high school in the spring and her best friend is moving away. She’s going to be hella lonely but she’s going to see her friend off because it’s all she can do. On her way, she runs into Yukari, who also is traveling to see a friend who is leaving. Yukari forgot her wallet and needs fare to complete her trip–it’s a first meeting that plays on their expectations of each other and ultimately cements their blossoming friendship.

The synopsis introduces “Four friends share the springtime of their youth together” and that is correct. With Yuna and Yukari come the two boys who are mixed up in the topsy turvy complication that is called friendship, attraction even,and obligation. Our main players are the soft-spoken and idealistic Yuna, who is very much the-girl-next-door type of character many will recognize. Yuna becomes fast friends to her total opposite, the fast-talking realist with her heart on her sleeve, Yukari. Joining the girls are Rio and Kazuomi. Rio is the tall, handsome playboy, of course, with surprisingly emotional depth that peeks through the more and more you see of him. He happens to be Yukari’s brother. Kazuomi is not quite Captain Obvious. He’s Yuna’s actual next door neighbor who she’s known her whole life — making him the literal boy-next-door. Together all these personalities build an intriguing web of character studies that keep being developing with each page. Each young person has their own thoughts and strategies of conquering love and maintaining friendships. This is the work Io Sakisaka does well. 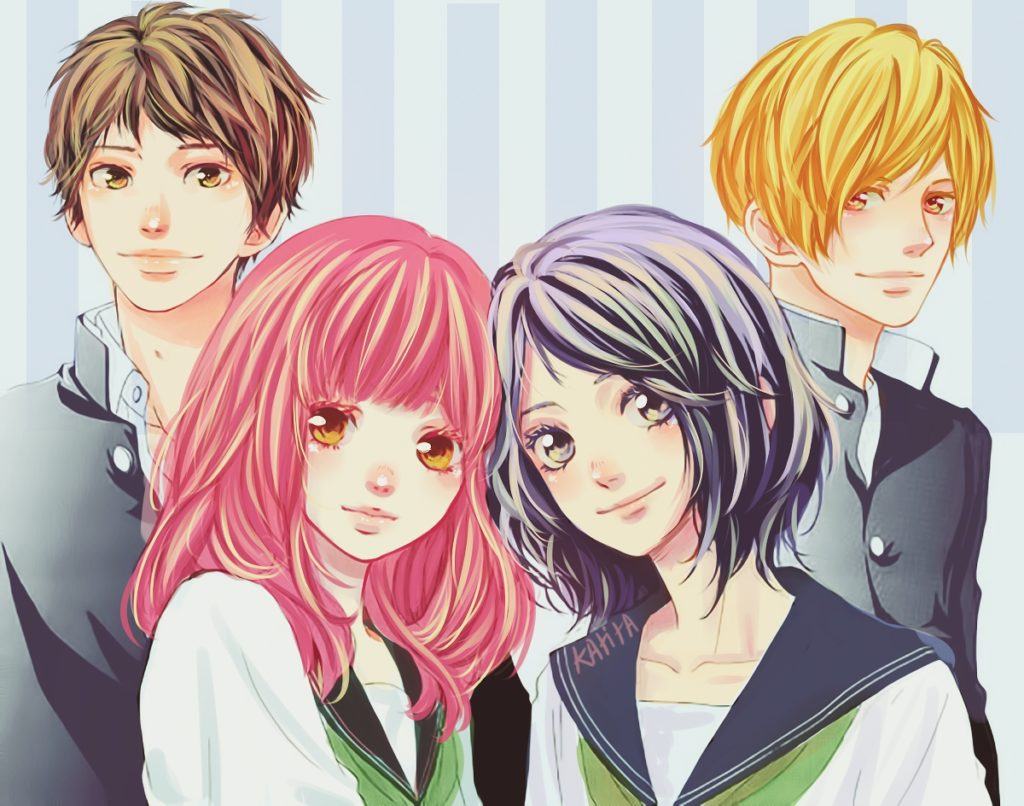 I’ve been starving for some new shojo manga and this filled a hole. Yuna and Yukari are great foils to each other –they’re total opposites and yet their views on loves and their experiences make this narrative an intriguing one. More than once, other characters make remarks on this unusual pairing — saying that they didn’t know that those two would become friends. And this is part of what I’ve been looking for: more female friendships, written by women.

More emphasis on the friendships that we have with other girls who aren’t similar to us, that don’t always think and act like us. Relationships come in all flavors, don’t they? And to that point, friendships do too. Yukari and Yuna start high school with vastly different ideals on loving someone and being loved and how to make things happen in the love department. Yuna is much more naive and critical in a sense when compared to Yukari’s freer and open-minded disposition. I like the author’s presentation that both girls and their views are valid. Neither are truly wrong. Loneliness does play a part in how they link up and being brave picks up the baton when the girls link up. Their friendship is one that readers can follow along with an endearing attitude.

Call me a broke record — I’m here for girls being friends with other girls and those same girls taking care of each other. From the earliest moment of Yukari asking to borrow money for fare from Yuna, a total stranger, to later instances of Yuna being warned to stay away from a guy who will without a doubt, break her heart. Later there is a really BIG moment at school of defending another girl who has been wronged and falsely accused of being involved with a boy who belongs to another. These girls stand up for each other. Throughout the manga, some of the artwork is the strongest here in these moments.

There’s some growing up and a lot of tears and confessions that seem simple, even if they are to themselves or to a dear friend. It is moments, some explosive and some quiet, that make a story. This ain’t no cookie-cutter shojo, folks. Know that. There are some poignant moments with the boys, both Kazuomi and Rio, that I shouldn’t gloss over in this issue. They aren’t just sidekicks or just possible love interests but characters. I hope they are developed well into the next volumes alongside their female counterparts.

The pacing is suited for those who can wait and those who can play the long game — If you can emotionally invest in the first 100 pages, then you’re good. This is no microwave feast to behold. I can imagine this is where some readers will be lost if they want it all within the first two chapters or so. Also of bigger note: The revelation made at the end of volume one is a D-R-A-M-A-B-O-M-B and in the way of Adventure Time’s LSP.

It’s either going to make or break your budding love for this series. With that being said, Io Sakisaka’s introduction of the dynamic of these four characters is done in such a way that I have more than a sliver of interest in how they’ll be as high school students navigating life and love. I was touched by Yuna and Yukari and how they’ve been adapting: Yuna the girl whose ideal first love is princely and Yukari who would rather grab love by the collar. The ever-present notion that when you’re young and you have no idea of what you’re doing and you’re swimming with the current trying to figure out which way to go with your feelings is relatable AF and I’m ready to feel this once more.

Timeline wise, I believe this was a series created after Ao Blue Ride so Io Sakisaka had time to think on what worked and what didn’t from that series and apply that here. I’d recommend it if you know and love her work: Love me, Love Me Not, Volume 1 is for those who like character-driven work with a slow burn for romance and development. This may be too slow for you which is a shame as this type of story needs time to stew in the pot before we get to the meat and the potatoes.

Read our site’s other reviews and coverage of manga here.

Curious about new shojo? Is Shojo Beat continually delivering? Sound off in the comments or let us know on social.