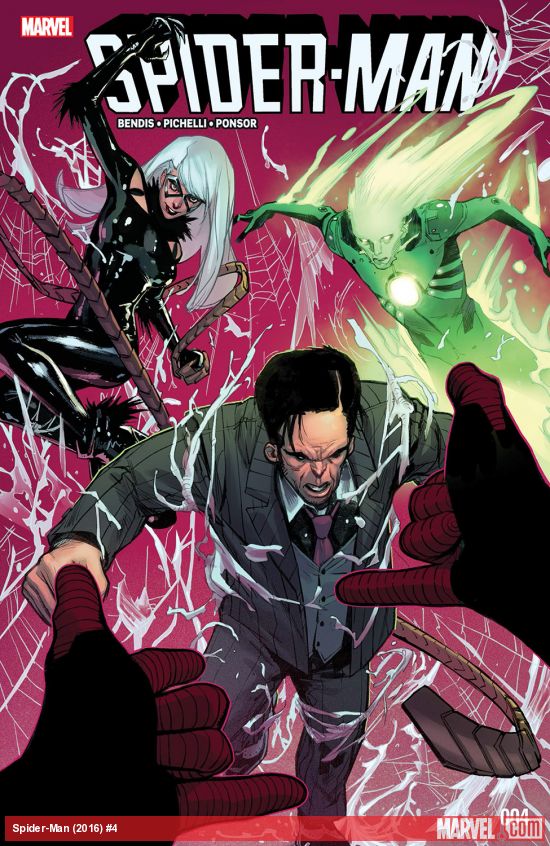 *Sees writer Will Evans having fun reviewing issue #3 of Spider-Man featuring Kamala frakin’ Khan. Looks at Spider-Man issue #4. Shakes head. Sees Will Evans tossing Spider-Man #3 up in the air and catching it as if it were a child.*

*Sigh* I was complaining to Will earlier today about how come whenever it’s my turn to review Spider-Man is when we’re talking about race… and falling short. The first time was in Spider-Man #2 with the whole Black Spider-Man stigmata that Miles wanted to avoid. Fellow contributor Thuli Zuma and I touched on that in an editorial with mixed reviews mostly ranging from agreement to “wait to see where it’s going first (which we acknowledged) before jumping to conclusions.” We’re now in the fourth issue where the topic of race comes back up and it’s groan worthy.

This issue revolves around the dialogue between Ganke and Miles entirely. Ganke wants to meet their new classmate who is a former X-Man and wants Miles to accompany him. Miles doesn’t get the appeal. Ganke explains that this former X-Man is a husky guy himself, which is a huge display of body image representation for Ganke, something he doesn’t think Miles would understand being skinny. Miles then brings up the issue of being Black and those experiences that Ganke wouldn’t get.

Had the conversation just ended there, it would have been all good. Two friends raising fair points on each side, one about body representation and being discriminated against for size (fair point) and his friend not being able to relate to that type of discrimination but experiencing discrimination based upon the color of his skin (another fair point). Both struggles and points acknowledged by both parties… but nah, what we get is the pain Olympics. 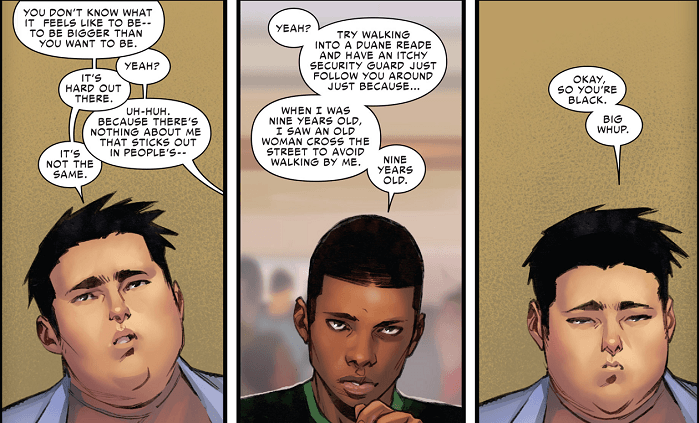 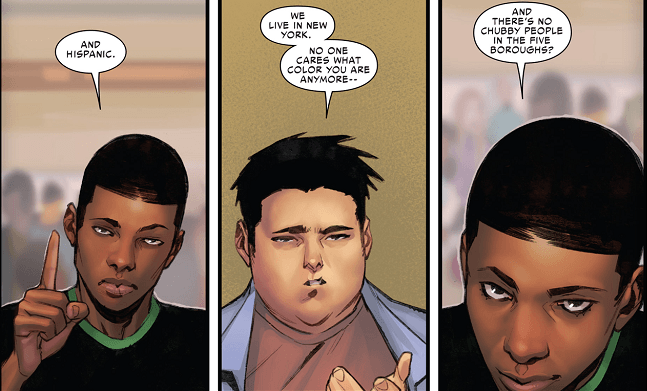 “Wait to see where he’s taking the story. Don’t jump to conclusions.”

[divider type=”space_thin”]
Not taking into account Miles addressing himself as Hispanic (which is usually an umbrella-term that most progressives use), it’s really hard to sit here and ignore Ganke goin’ for the post-racial NYC platform. It’s hard to say, but it seems very out of character or maybe it’s young and ignorant or maybe *does a “I dunno what’s happening,” grasping-for-words motion with hands*. What Ganke does next (totally not related to this topic) is truly the shocker of the issue.

Sara Pichelli came through with the art work per usual in this issue. What action does take place we see as Pichelli does little breaks in panels for Miles’ athleticism and acrobatics, which I love. It’s as if Miles moves so uniquely that the artist has to allow him the proper amount of room and range to express his maneuvers. The majority of the artwork in the dialogue comes across well under Pichelli as her details in the faces of the characters sells the sarcasm, bewilderment, and confusion between Ganke and Miles as the conversation evolves into something more serious.

Yeaaaaaah, I’m not really with the direction this conversation was trying to go in this issue. I’ll keep it at that because any thing more would basically be the sequel to my previous editorial. This isn’t to say that Miles or Ganke have to be “woke” and not allowed to be young and have these thoughts or perceptions (many folks comment that they went through this) which is fine… however wouldn’t it be nice to see the kids that are aware of these things? I mean, it’s 2016 and we have seen this pattern before. A character that acknowledges the Black experience and can recognize the struggles of others as well as their own would be the great deviation, but that would require a Black writer for that Black experience. I don’t think there’s any shame in passing the sticks in that instance either.