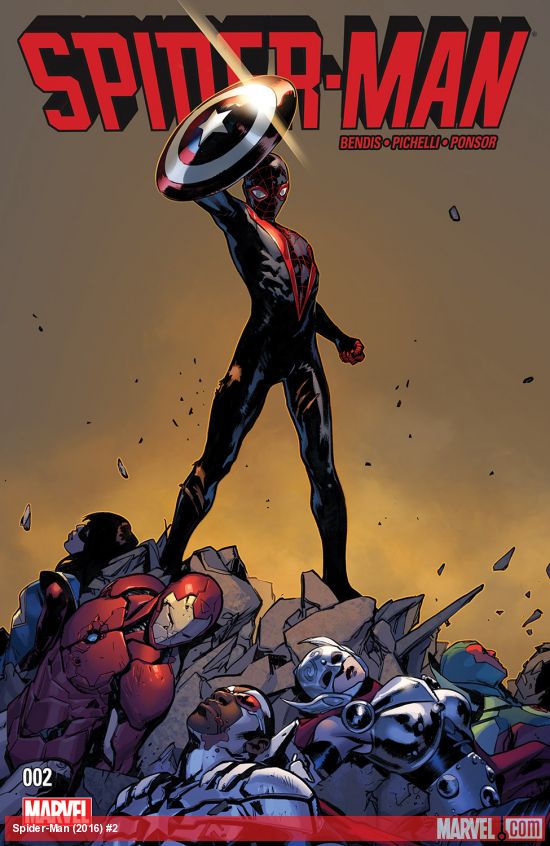 Y’all muh fuckas gon’ learn to respect Miles Morales as the gawd of the 616, yo. Y’all gon’ to to accept it, and fucking love it. We pick up where we left off with Peter Parker arriving on the scene, seeing the damage and proceeding to ask Miles WTF just happened. Peter isn’t really giving the newbie the benefit of the doubt either (which feels rather uncharacteristic of Pete), but that serves as setup for when Blackheart returns and Miles proves (yet again) that his 616 gawd Twitter handle isn’t just for play. Peter sees it and dubs him Spider-Man.

The action this issue was great and Sara Pichelli displays Miles’ fighting as very unique and possibly the most spider-like we’ve seen of him, however the main fight isn’t the draw this issue — it’s everything going on post 2nd-round knockout with Blackheart. Bendis has Miles needing a moment to unleash the gross factor of fighting a demon in front of Ganke, and rightfully so, because that’s got to be an icky feeling.

It serves as a very humanizing moment for Miles, as well as showing that he’s still new to this and has yet to get the “just another day at the office” superhero demeanor when it comes to facing the supernatural. Sara does an incredible job switching up the artwork between Miles’ interpretation of memories as Spider-Man, which come across as cute caricatures with more cartoonish detail, and then when Miles is in the present moment then the art is more serious and detailed. It’s similar to Brittney Williams’ interpretations over at Patsy Walker in her series but it’s done with Sara’s flare, making it unique to this book.

Bendis also isn’t pulling punches, as it gets really real for Miles right of the bat. Spider-Man warned him about someone figuring out his indentity since his cosutme (which Peter admits is cooler than his) is torn from battle damage. The opposite effect occurs though when a YouTuber shouts out how amazing and happy it is that this new Spider-Man is a kid of color. 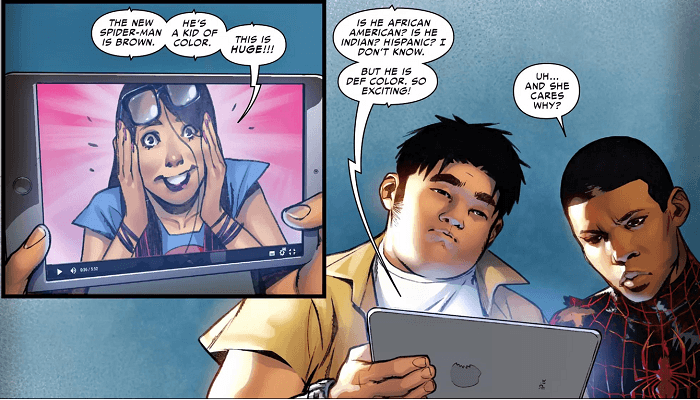 She’s reveling in the diversity among the new heroes (like a woman Thor and a Black Captain America) whereas Miles takes the stance of, “what does that matter?” It’s a genius move as this girl becomes the voice of us, the audience, who have been asking for diversity and representation in Marvel, and the joy of finally seeing it happen (shout out to Kamala Khan), as opposed to Miles who doesn’t want to be pigeon holed as “The Black Spider-Man,” like what John Stewart had to deal with over in DC Comics with people thinking of John as “The Black Green Lantern.” (Dwayne McDuffie addressed this on his Justice League run with John saying, “That’s their problem. Not mine.”)

I didn’t think we’d be seeing Miles’ take on being a dark-skinned Spider-Man within comics at all. You know this is going to have to be addressed further down the line and I think Bendis and Sara are going to give us more heat makers down the way with this topic. We’re also seeing a setup for some old Parker enemies to take a shot at the newbie Miles. Plus, we get a new player stepping into the arena and this person has Mile’s father shook!